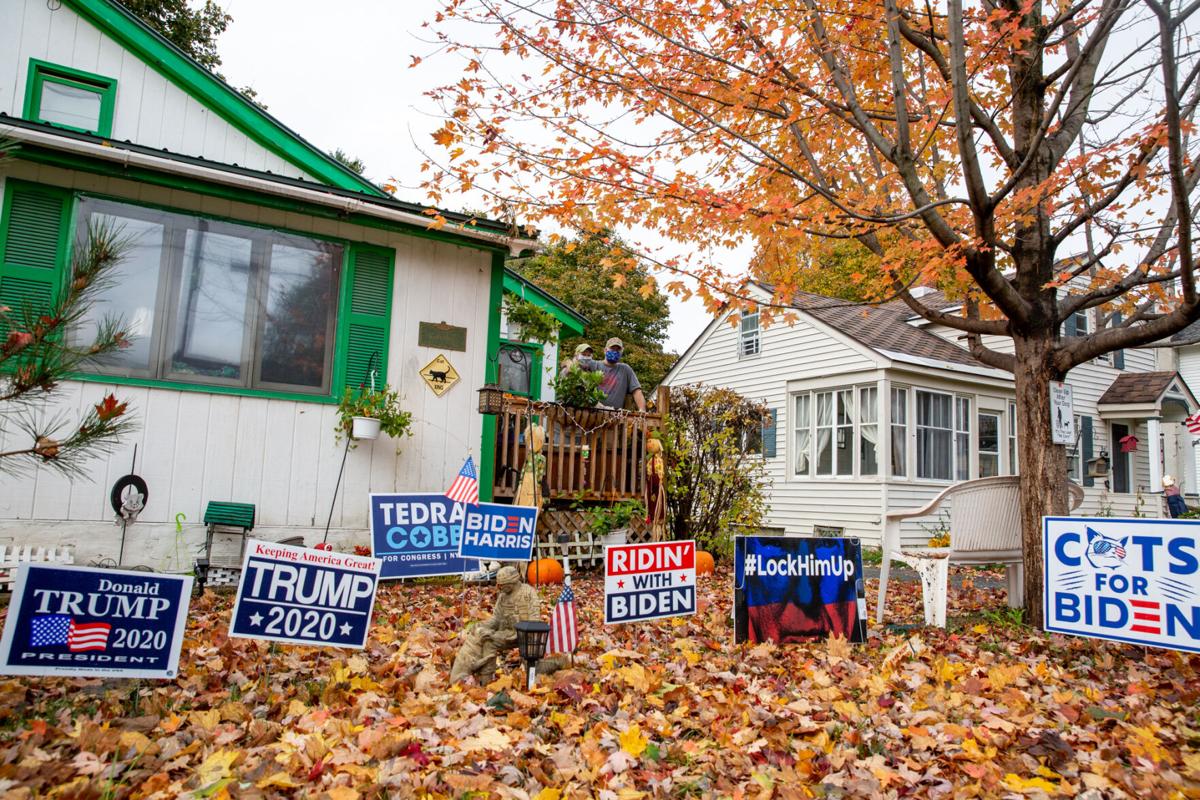 The signs outside the home of Irish I. Cornaire and Jim E. Cornaire on Gotham Street in Watertown cover the political spectrum. Kara Dry/Watertown Daily Times 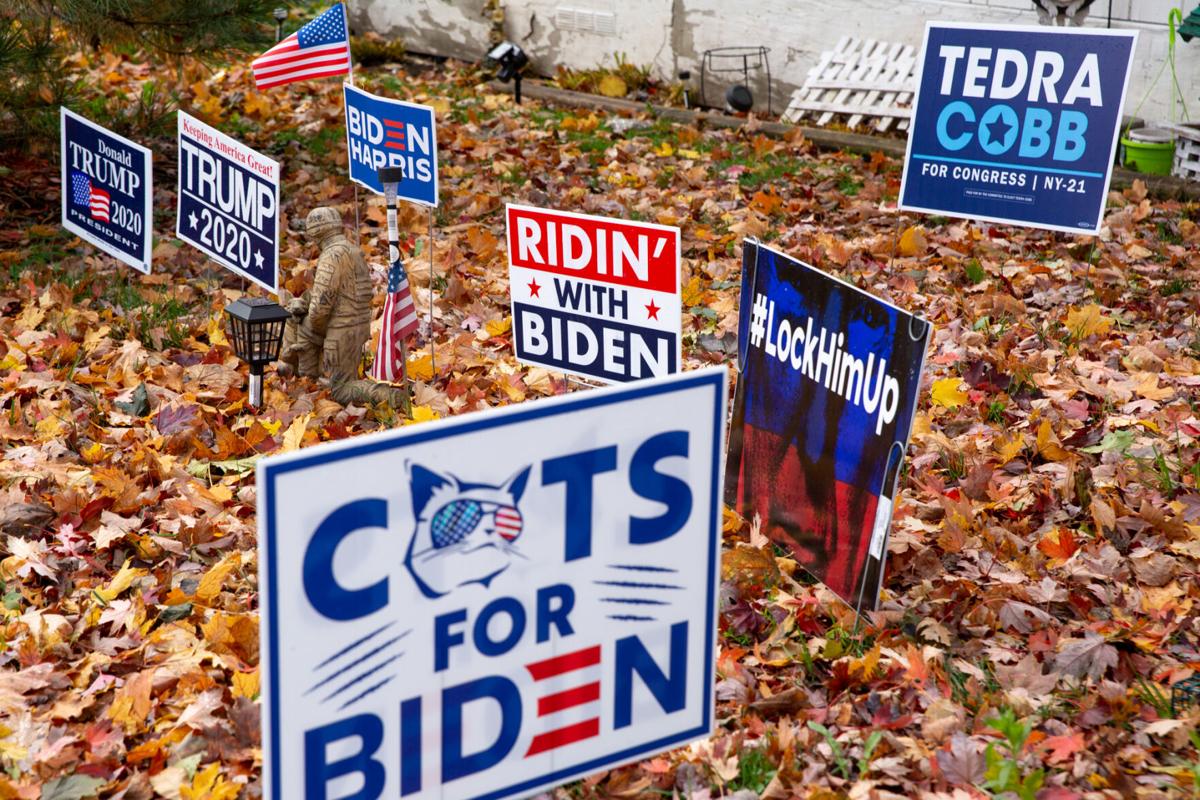 Irish I. Cornaire and Jim E. Cornaire have differing political views, but the conflict tends to stay on the front lawn with the opposing campaign signs at their home on Gotham Street in Watertown. Kara Dry/Watertown Daily Times 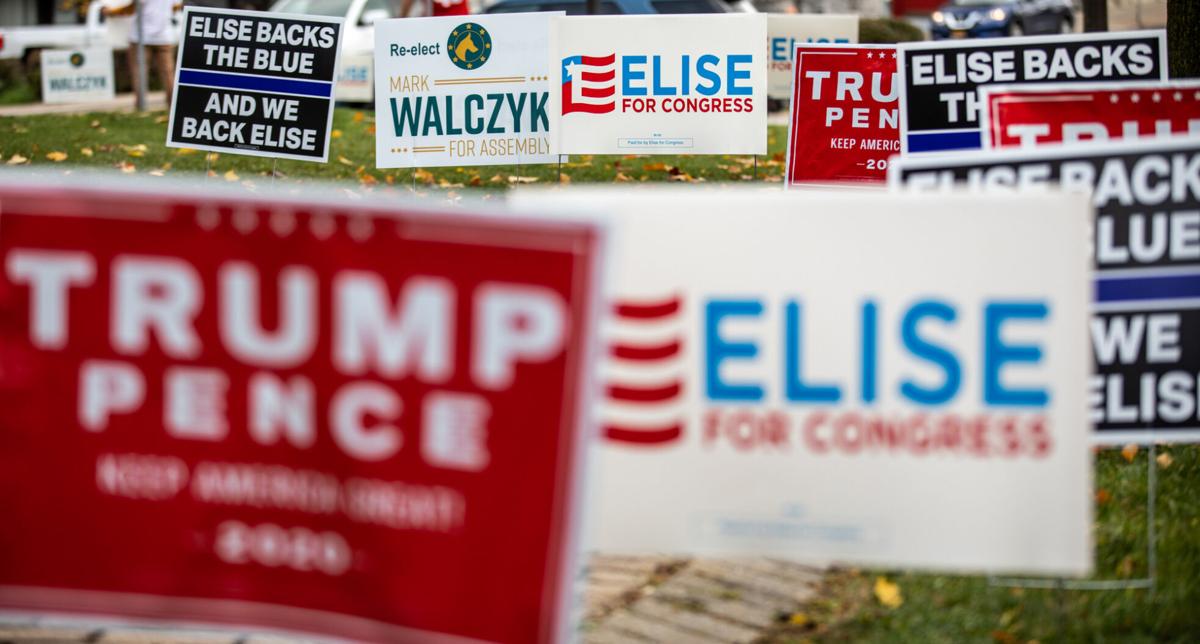 The signs outside the home of Irish I. Cornaire and Jim E. Cornaire on Gotham Street in Watertown cover the political spectrum. Kara Dry/Watertown Daily Times

Irish I. Cornaire and Jim E. Cornaire have differing political views, but the conflict tends to stay on the front lawn with the opposing campaign signs at their home on Gotham Street in Watertown. Kara Dry/Watertown Daily Times

WATERTOWN — Irish I. Cornaire got up one recent morning and looked out her window to see her husband had placed signs in support of President Donald J. Trump alongside her Joe Biden signs in their front lawn. She was angry at first, but then they discussed the goal of being able to have differing opinions and to still love each other.

It took the Times about an hour to drive a sliver of Watertown, counting political signs and seeing where the numbers fall in a sample size of the city. Between the roughly 25 streets from Washington to Franklin streets, there were 20 Trump signs and 11 Biden signs. For the record, Rep. Elise M. Stefanik, R-Schuylerville, was the runaway winner in that area. There were 44 signs in support of her, while her Democratic opponent, Tedra L. Cobb, was seen on 18 signs.

Mrs. Cornaire and her husband, Jim E., live in that area — on Gotham Street — and they have the most interesting front yard when it comes to political signs. There are signs for Biden and signs for Trump, as well as one for Ms. Cobb.

“We both happened to be in a New York chatroom,” he said, “and her question was, ‘Are there any Irish men in here?’ And I said, ‘Well I’m half Irish.’”

Mrs. Cornaire would end up moving to New York, and they hit it off.

“One thing he said to me,” Mrs. Cornaire said, “that was so sweet was, ‘Why don’t you come because I have an extra bedroom and I promise I’m a gentleman.’”

That ended up being confirmed, and now they’ve been married for 15 years. They haven’t talked politics much over the course of those years, even when they knew they were at odds. Naturally, the 2020 election has sparked some debate between the two, but they’ve decided to turn it into something good.

Right after that one morning when Mrs. Cornaire saw the Trump signs next to her Biden signs. She was angry he put them out there, so she decided to rip hers out of the ground and throw them on her back porch. But then they got talking.

“I told her,” he said, “to put them back out there because it can prove to people that two people can live together and love each other and still have different views.”

That hit home for Mrs. Cornaire. She thought about it and ended up appreciating the goal. It even got to the point where, when someone ripped out his Trump signs, she put them back.

When Mrs. Cornaire talks about how she thinks Mr. Trump’s rhetoric about people of color and women is disgusting, her husband listens intently with respect for that, and vice versa when he talks about why he supports Mr. Trump.

“So far, I like his take on what he’s going to do about the coronavirus,” Mrs. Cornaire said about Mr. Biden. “That is really important to me because I have underlying health issues. I know in my heart, had he been president already, he would have gotten on top of it instead of what Trump did.”

Mr. Cornaire is voting for Mr. Trump mainly because he didn’t agree with the Democratic Party spending what he thinks is too much money on trying to remove someone from office. He said that was all they did in four years, and he can’t support that.

“As far as morals, he’s not the perfect president,” Mr. Cornaire said of Mr. Trump, “but he is the better of the two I think.”

Above all, they might consider themselves somewhat stubborn, but they’ve made it work. One will get to have a victory dance in November, and the other will have to respect it. No matter what, they are still going to love each other. When they were asked about how their lives have changed over the last four years, the main priority was their relationship.

“We’re still together,” Mr. Cornaire said. “We still love each other, and nothing really has changed in that respect.”

Have you experienced strained relationships between family or friends this year due to political differences?

Their cat is also slow.

Ah! But that slow cat is for Biden. Smart cat!

That slow but smart cat is black. I can't tell you how many times it's crossed my path while driving on Gotham, giving the impression that something bad or unpleasant is going to happen. Who needs that?

It's possible, when confronted with the ominous pattern, I could interrupt it by training myself to think Biden instead of bad and unpleasant.