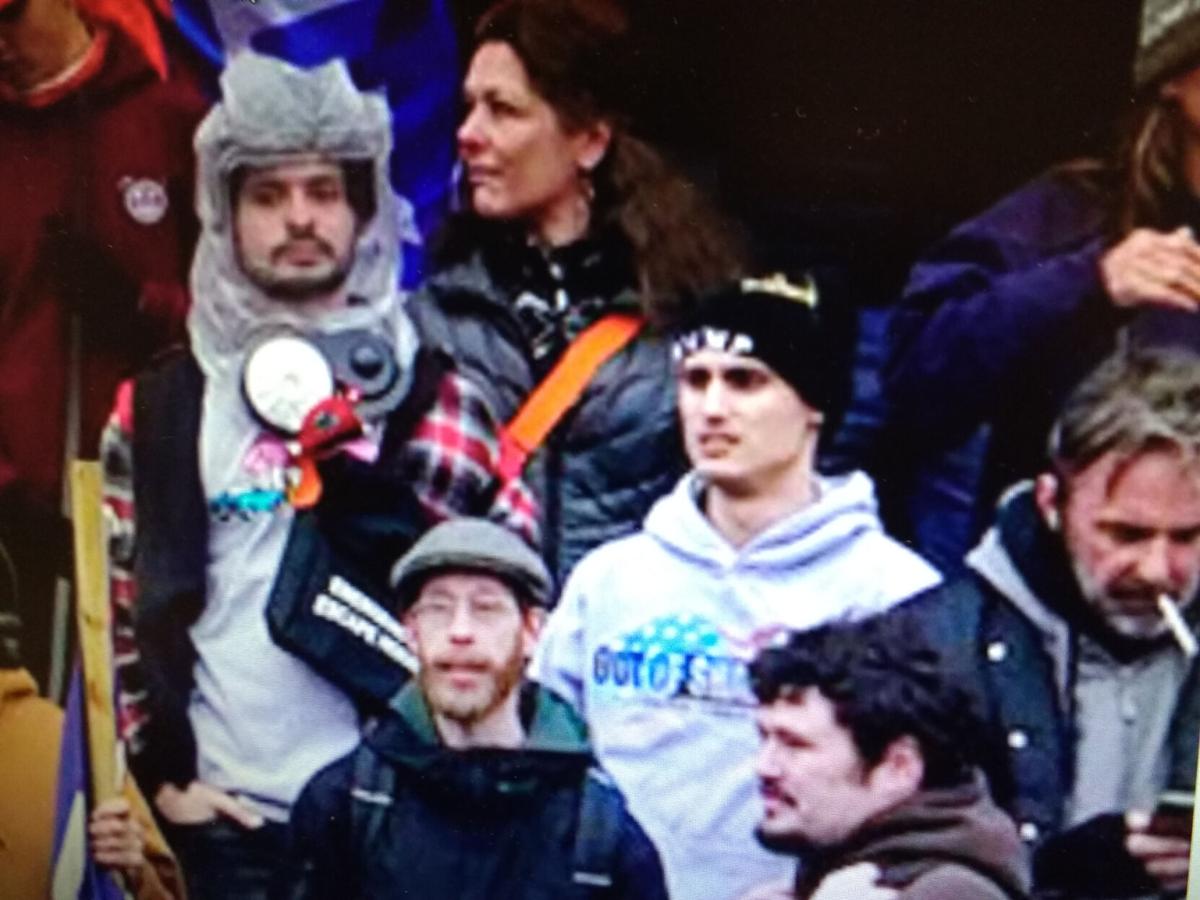 An image of Maryann Mooney-Rondon exiting the Capitol building on Jan. 6. She allegedly has a rescue device meant for use by members of Congress strapped over her shoulder. The image is included in a criminal complaint filed in U.S. District Court. 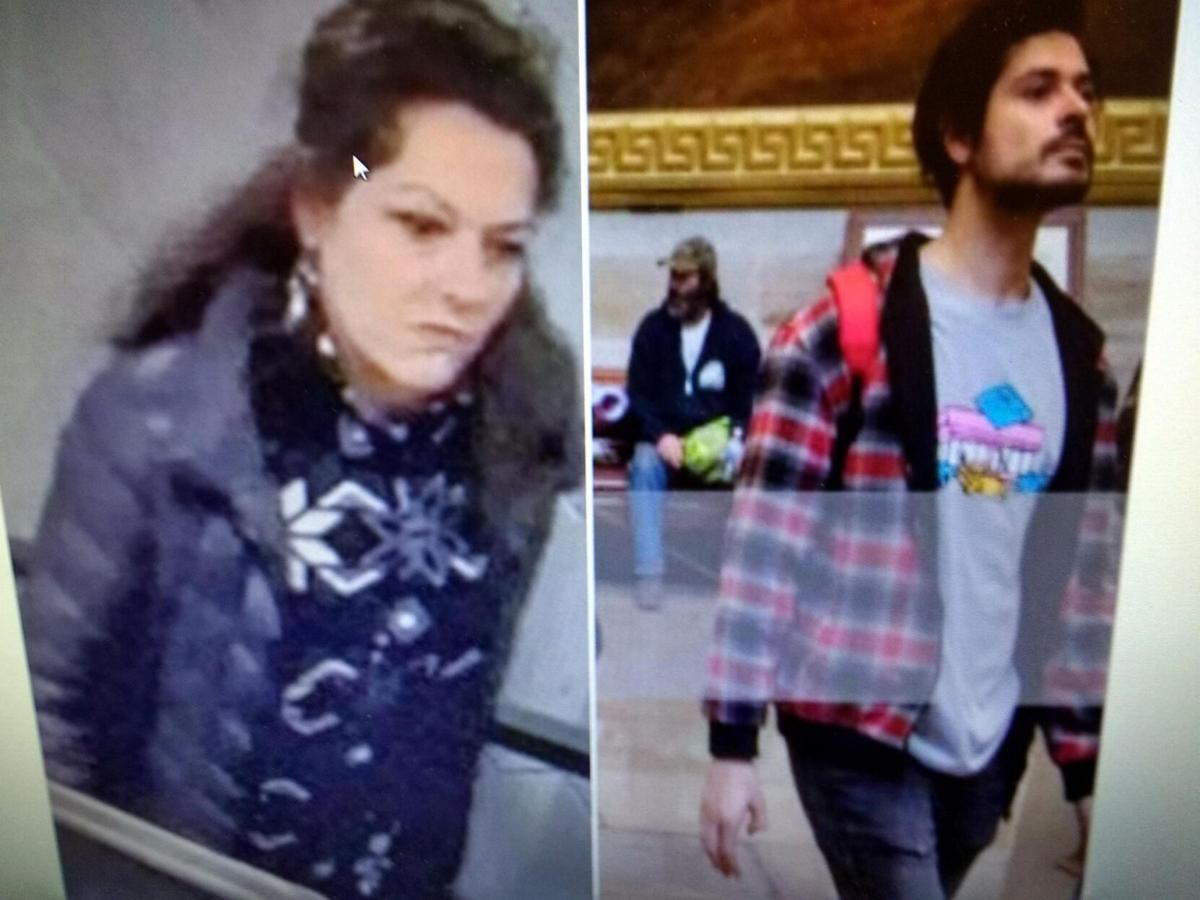 Separate images of Maryann Mooney-Rondon and her son, Rafael Rondon, at the Capitol building on Jan. 6. The images are included in a criminal complaint filed in U.S. District Court.

An image of Maryann Mooney-Rondon exiting the Capitol building on Jan. 6. She allegedly has a rescue device meant for use by members of Congress strapped over her shoulder. The image is included in a criminal complaint filed in U.S. District Court.

Separate images of Maryann Mooney-Rondon and her son, Rafael Rondon, at the Capitol building on Jan. 6. The images are included in a criminal complaint filed in U.S. District Court.

WATERTOWN — A Watertown woman and her son have been charged by the FBI with taking part in the breach of the U.S. Capitol on Jan. 6, including entering the suite of House Speaker Nancy P. Pelosi at the moment the congresswoman’s laptop was allegedly stolen.

The charges were announced by acting U.S. Attorney Antoinette T. Bacon and Janeen DiGuiseppi, special agent in charge of the FBI field office in Albany.

Mr. Rondon is additionally charged in a federal indictment with possessing an unregistered sawed-off shotgun in Lewis County in June. That charge is separate from the charges related to the January incursion at the Capitol.

According to a criminal complaint filed in the case of Mr. Rondon and Mrs. Mooney-Rondon, the FBI’s Washington field office published a collection of images of individuals it was seeking to identify in connection with the Capitol riot. On May 4, the FBI received an electronic tip that identified Mrs. Mooney-Rondon and her son. A review of information received from their cell phone service provider allegedly placed the pair in the geographic area of the Capitol, including in its interior, on Jan. 6.

The complaint states that closed-circuit television surveillance of the Capitol captured the pair entering the building via a breached Senate wing door. The two proceeded together through the crypt on the first floor, up to the second floor and into the suite of Speaker Pelosi. They then entered a conference room in the congresswoman’s office.

A five-second video recorded by a bystander shows someone reaching from outside the frame of the recording toward a laptop and gloves on a table. The complaint states that clothing and a ring shown in the video were consistent with what Mrs. Mooney-Rondon displayed and that a female voice is then heard on the recording stating, “Dude, put on gloves.” An unidentified person then appears to use the gloves and lift the laptop from the table before the recording ends.

FBI agents later determined that a laptop was stolen from Speaker Pelosi’s conference room during the riot. The same brief recording allegedly shows Mr. Rondon in the conference room with his mother.

The pair is then captured on CCTV entering the Senate gallery, which overlooks the Senate floor.

After leaving the gallery, they are allegedly shown carrying “escape hoods with satchels,” which are filtering respiratory protective devices kept in the Capitol for members of Congress and staff for self-rescue. The devices provide 30 minutes of protection from carbon monoxide, chemical, biological, radiological and nuclear contaminants, according to the complaint. They are valued at $235.18 each, for a total of $470.36. As the pair exited the Capitol via the Rotunda steps, video allegedly captured them carrying devices.

On June 29, a search warrant was executed at the Rondons’ Watertown home where some of the clothing observed in the Capitol videos was located. Two emergency escape hood bags taken from the Capitol were also found.

Mrs. Mooney-Rondon allegedly admitted to investigators that she provided gloves to a man to help him steal Speaker Pelosi’s laptop, confirming that it was her arm shown in the bystander’s video. She said she was “probably 100 percent” sure that she saw the man put the laptop into a backpack. She said she gave the man her gloves because he “scared” her.

“When he asked for, whatever he asked for to, I think he just didn’t want to touch it ... I mean that’s why I was like, we gotta get out of here, this isn’t right, I mean he scared the crap out of me,” she said, according to the complaint.

Mrs. Mooney-Rondon said she then went to the Senate gallery, where election results from the race between President Joseph R. Biden and former President Donald J. Trump were to be certified prior to the Capitol being overrun. She allegedly admitted that she took an escape hood from the gallery. She also showed agents pictures she had taken inside Speaker Pelosi’s conference room.

Mr. Rondon told agents that he was with his mother inside the Capitol. He said they rode the Metro into Washington “because I’m not taking my car into the city which, the Capitol building I’m about to break into.” He also admitted that he assisted the unidentified man in placing Speaker Pelosi’s laptop into a bag using a glove. He said the man had yelled at him and his mother to help him.

“And I was honestly a little bit afraid, because I didn’t know if he had anything on him ... So I assisted him a little bit, and that was probably stupid of me,” he told investigators.

Mr. Rondon also admitted that he and his mother entered the evacuated gallery and that he removed an escape hood from the Capitol. He said he deleted photographs on his cell phone taken inside the breached Capitol to avoid incriminating himself.

During the court appearance, an indictment was also unsealed against Mr. Rondon containing the firearm count. In that instance, it is alleged that on June 29 in Lewis County he possessed a 12-gauge shotgun knowing that the firearm had a barrel length of less than 18 inches and an overall length of less than 26 inches which was not registered to him in the National Firearms Registration and Transfer Record.

According to the U.S. Attorney’s office, a conviction for possessing an unregistered sawed-off shotgun carries a maximum sentence of 10 years in prison and up to a $250,000 fine.

He said they rode the Metro into Washington “because I’m not taking my car into the city which, the Capitol building I’m about to break into.”

Way to make it premeditated.

I’m sure the NRA would disagree, but what does anyone need a sawed off shotgun for? I hope he gets at least 5 to 10 for all the charges. And a mother of the year award for his mom.

What a good mom! Teach your children well.

Where is the 14,000 hours of surveillance video that will tell the real story? She and her son would have been better off torching Portland or Seattle.

"this isn’t right".... what a quote...after watching a mob bust windows...beat law enforcement.. screaming hang Pence... an obvious attempt on insurrection... and she comments it's not right to take a laptop? This is the same gang that'll want to re-elect Trump and ignore Covid...