WATERTOWN — A third-party investigation into multiple complaints that former City Manager Richard F. Finn created a hostile work environment determined that just one instance was founded. But it further found Mr. Finn lied about the incident, leading investigators to conclude the “falsification also calls into question the credibility of Mr. Finn’s responses throughout the interview.”

It appears that falsification, not a complaint filed by Parks and Recreation Superintendent Erin E. Gardner, was the basis for Mr. Finn’s resignation in January following a meeting in executive session with the City Council.

The city released a redacted version of what has been dubbed “The Finn Report” on Saturday evening. The report was prepared by Public Sector HR Consultants, Glenville, in response to Ms. Gardner’s complaints.

Most of the interactions, according to the report, took place during discussions regarding a plan to consolidate some work performed by the city’s parks department and its public works department.

Despite finding that six of seven of Ms. Gardner’s complaints did not rise to the level of a violation of city policy, the report indicated several interviews with female staff, taken collectively, “reveals conduct towards female staff that is intimidating and offensive.”

It concluded Mr. Finn’s behavior violated the city’s policy on Non-Discrimination and Harassment in the Workplace, which the report says “specifically prohibits conduct by any employee that disrupts or interferes with another’s work performance or that creates an intimidating, offensive or hostile work environment.”

According to a release issued Saturday night by Mayor Jeffrey M. Smith, the City Council considered the definition of a hostile work environment offered by the U.S. Equal Employment Opportunity Commission and the Society for Human Resources Management and reached a different conclusion.

The release emphasizes that a hostile work environment, according to the agencies’ definition, is characterized by “severe, pervasive and persistent” hostile behavior. After reading the report and applying that definition, the council “believed this complaint to be unfounded.”

“Personality conflicts, rudeness and isolated incidents do not constitute a hostile work environment,” the council stated.

Mr. Finn’s separation from the city stemmed from a seventh allegation based on an Oct. 7, 2019, interaction between Mr. Finn, Ms. Gardner and other staff that was recorded by Ms. Gardner on her cellphone without the other participants’ knowledge.

According to Public Sector’s report, at the meeting a person whose name is redacted responded “Bullshit” to a comment made by Ms. Gardner. After the meeting, Ms. Gardner voiced an objection to Mr. Finn about the comment and was told by Mr. Finn he would speak to the unidentified employee about how he spoke to Ms. Gardner.

During an interview with investigators, Mr. Finn “emphatically denied” that Ms. Gardner ever approached him about the comment and claimed he did not recall the unidentified employee making the comment, which investigators found contrary to evidence contained in Ms. Gardner’s recording.

“This denial constitutes a falsification of information provided by Mr. Finn during his interview,” the report states. “It is the conclusion of this investigation that Mr. Finn was not fully honest or forthcoming in his response to investigators.”

The City Council initially refused to publicly release the report, citing a respect for the privacy of employees who participated in the investigation with the understanding they would remain anonymous. The city subsequently denied Freedom of Information Law requests to review the report made by the Watertown Daily Times and WWNY-TV, also known as 7 News.

7 News sued the city in state Supreme Court to obtain access to the report and Judge James P. McClusky ruled the city must release it. The judge’s report did not say whether certain information, such as employee names, should be redacted in the report, so the city filed a motion to reargue the decision, resulting in a ruling that information could be redacted subject to Judge McClusky’s review.

Read the report below: 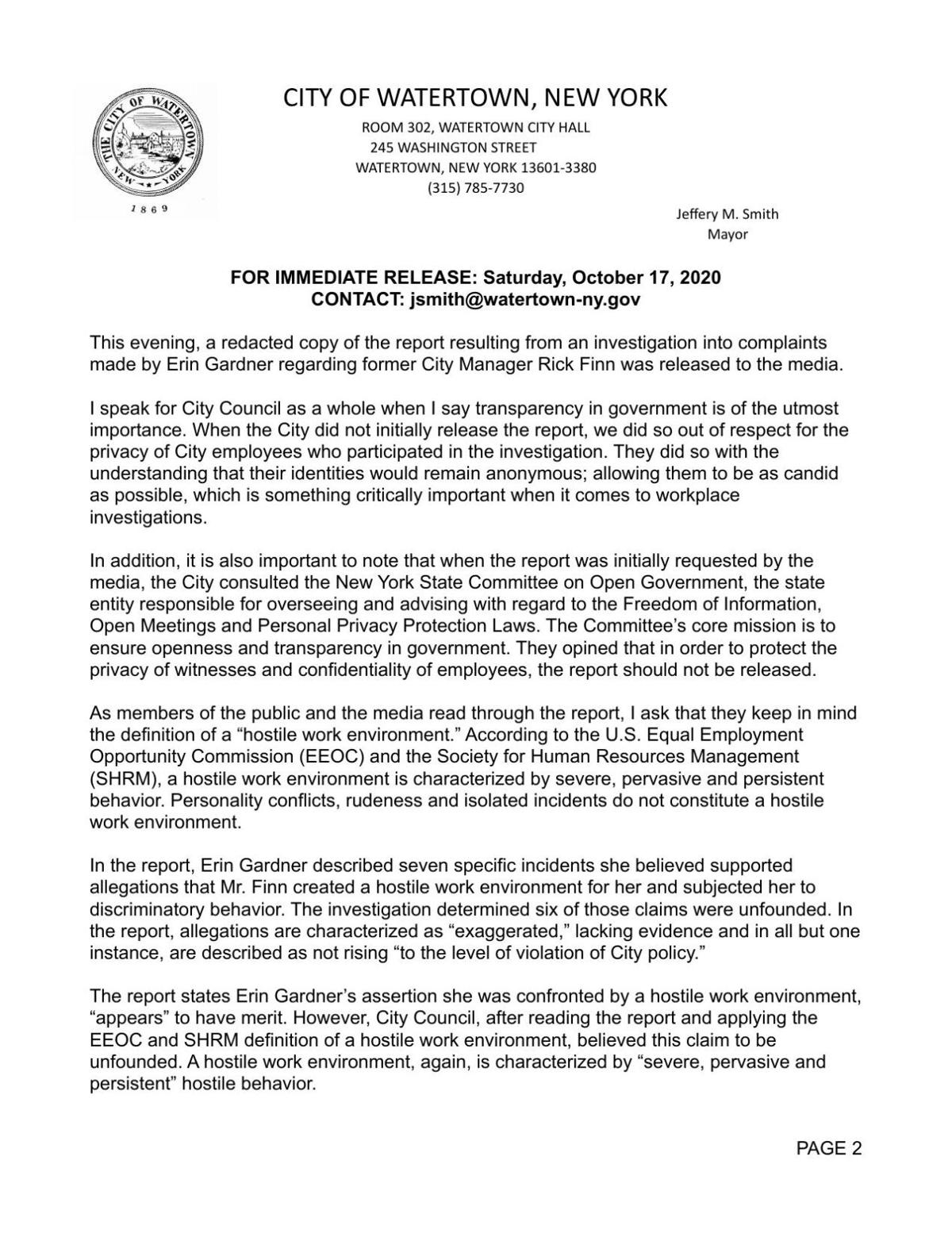 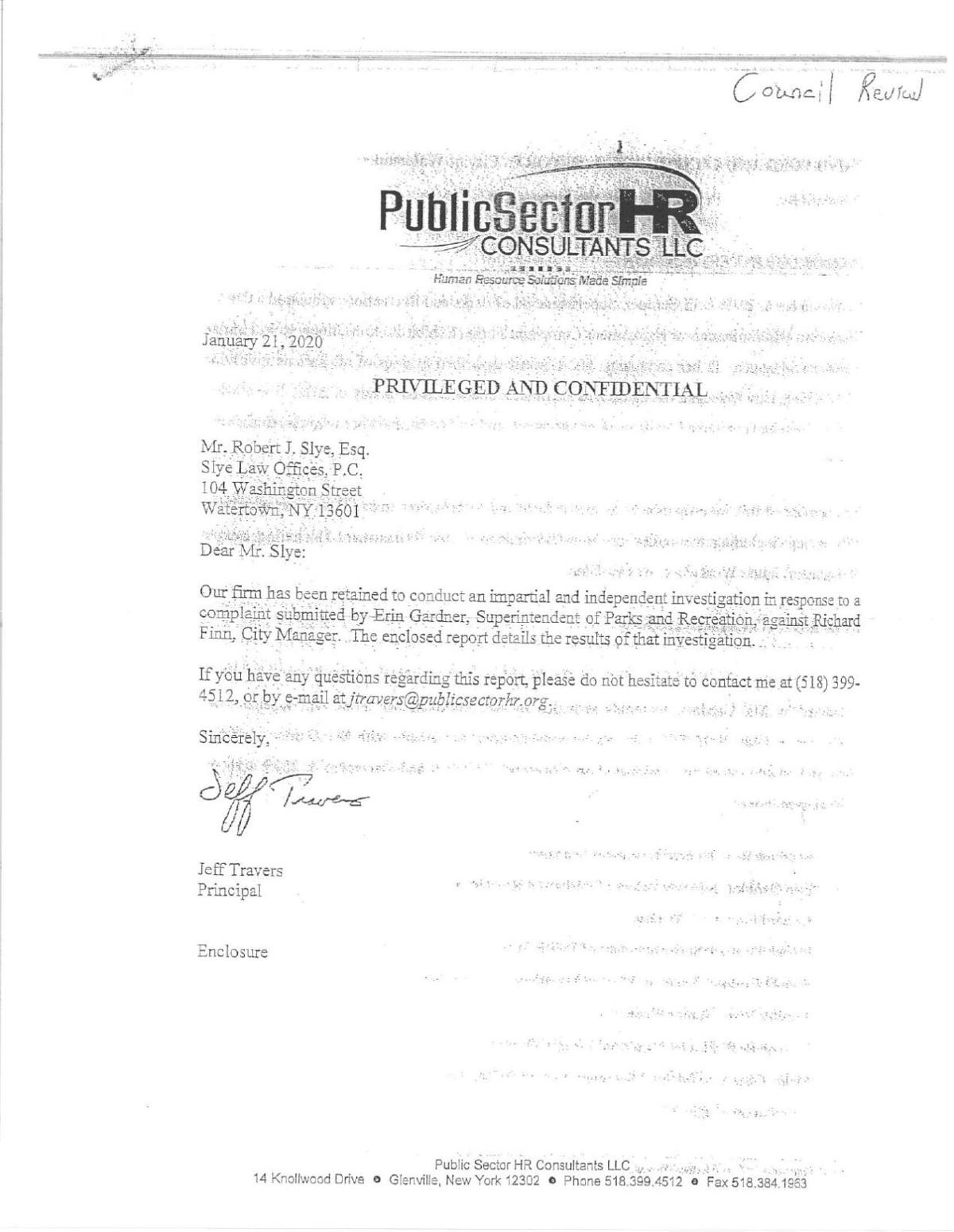 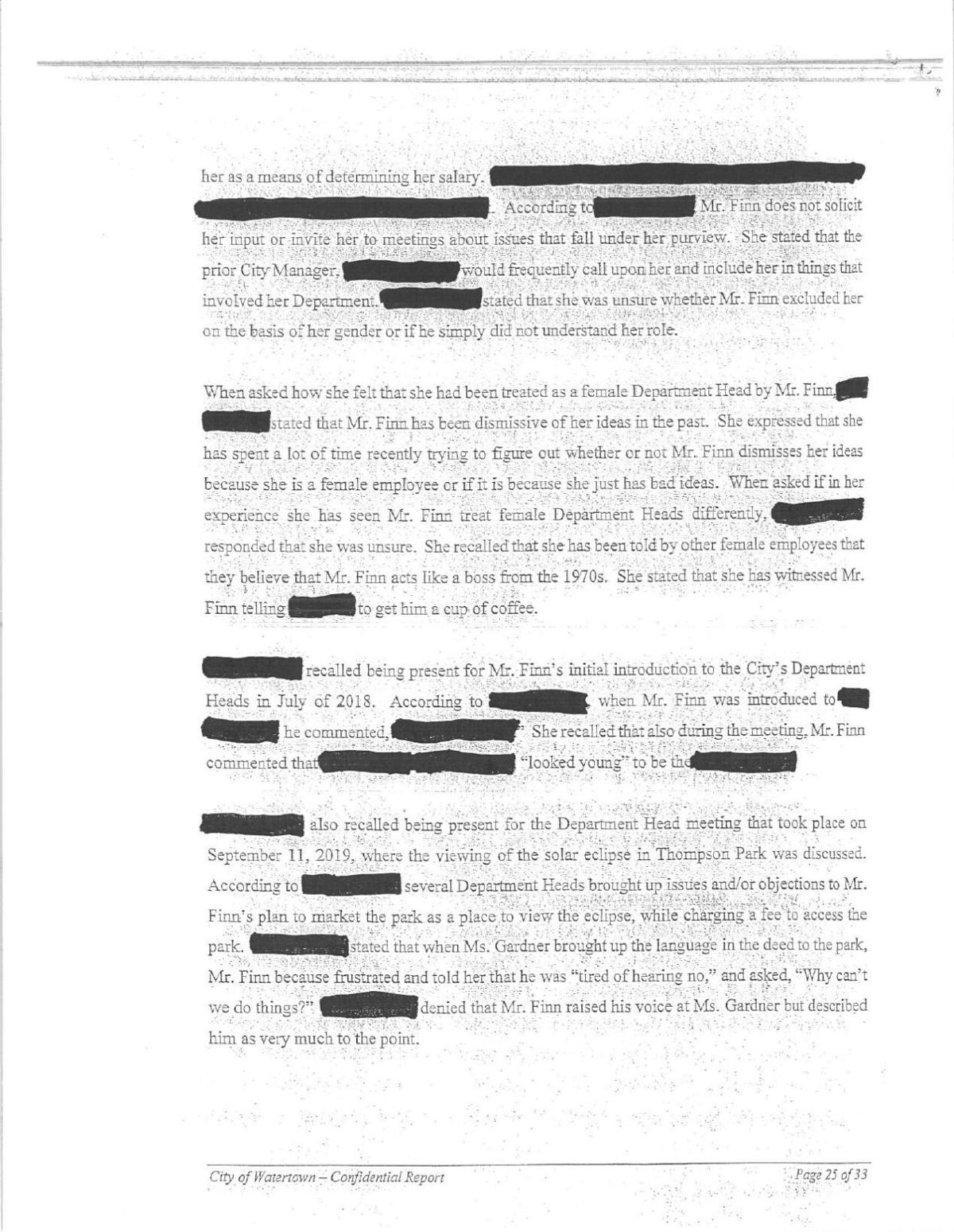 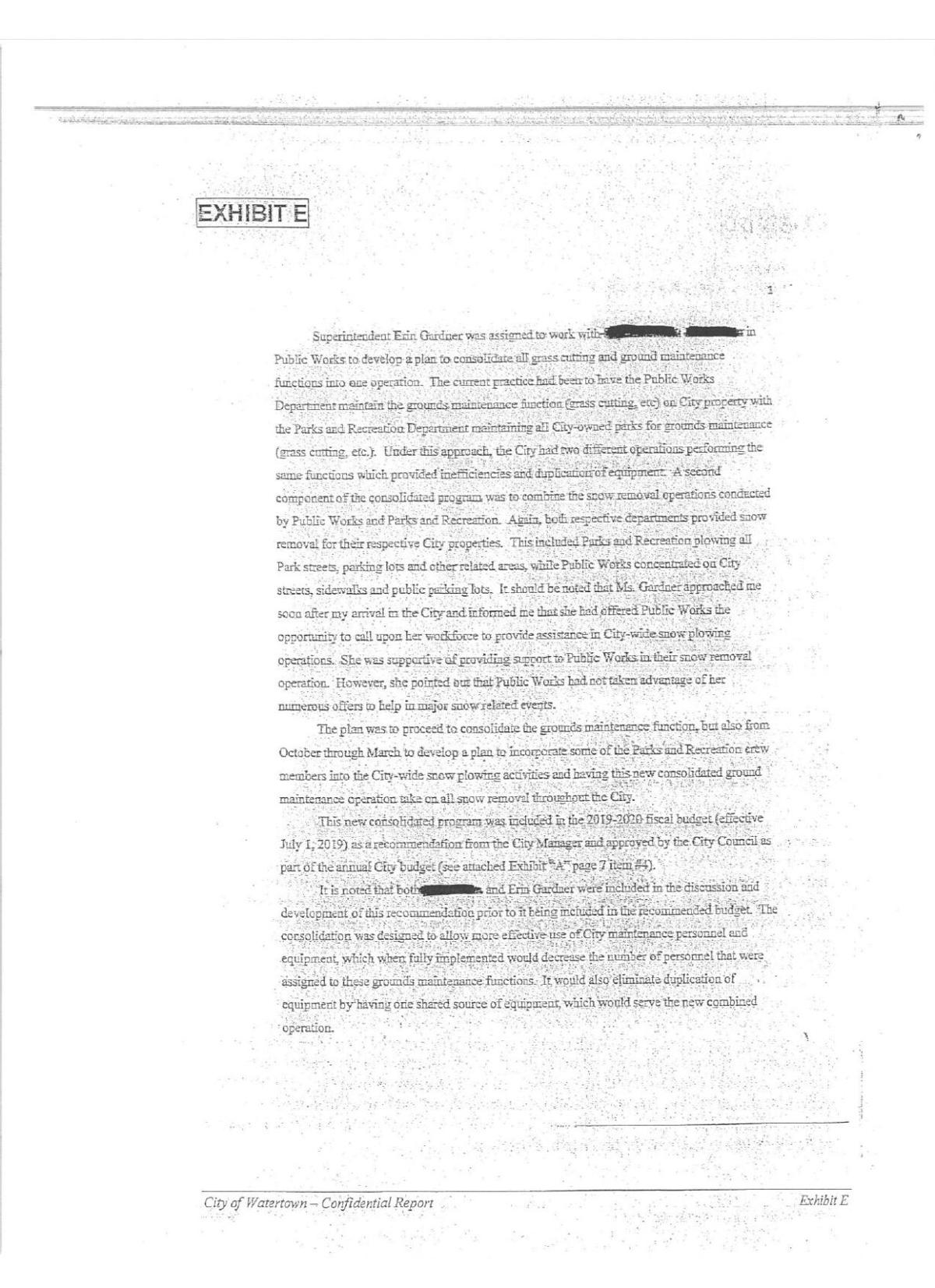