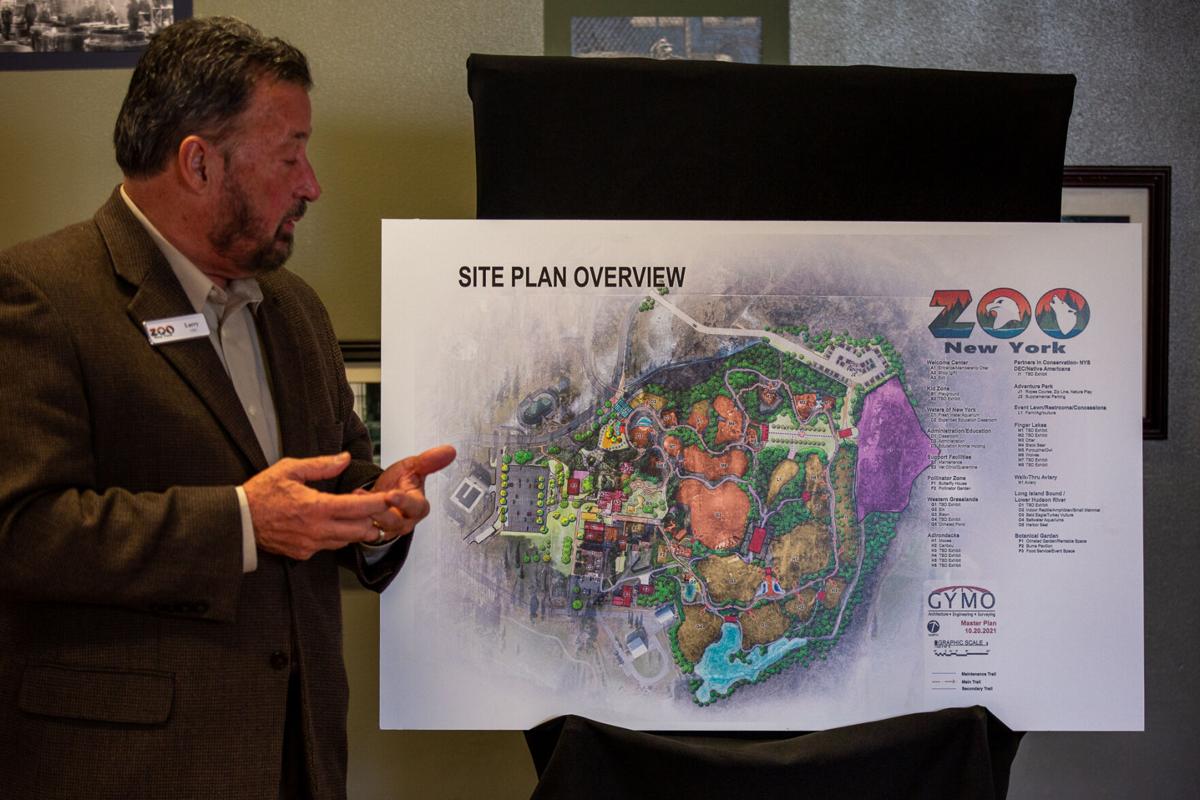 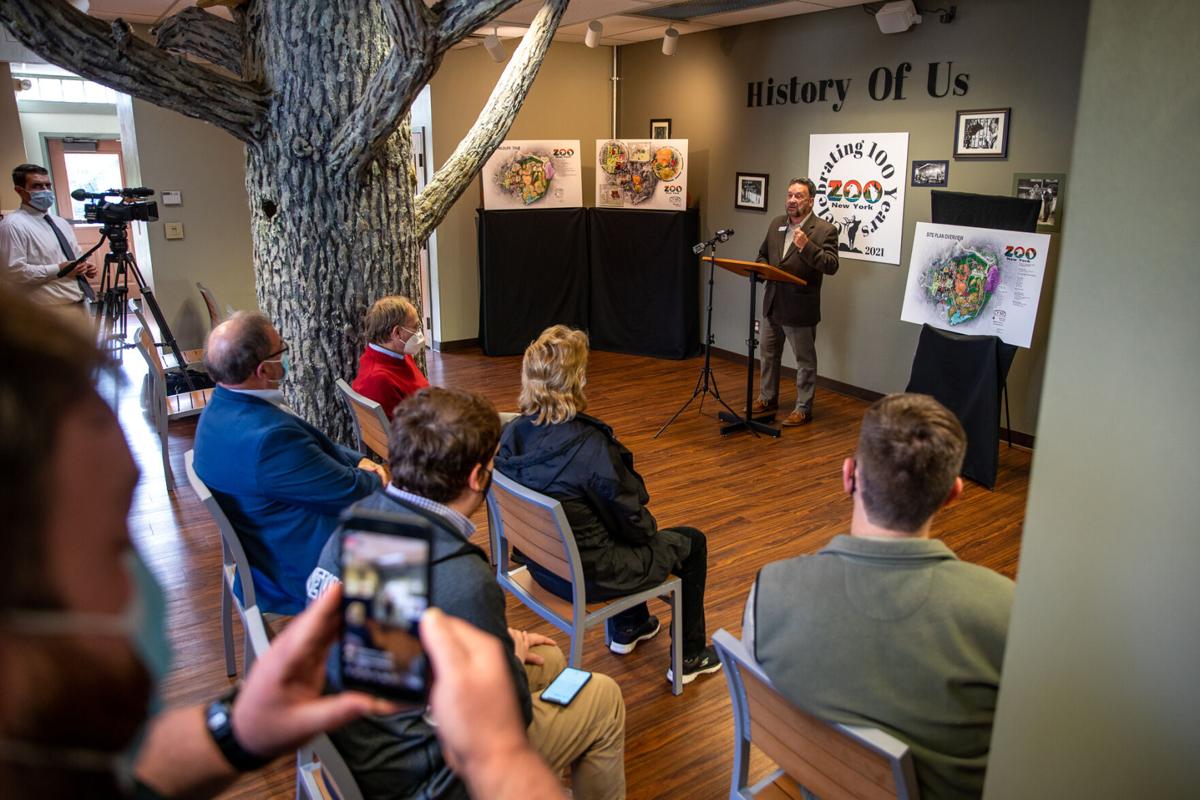 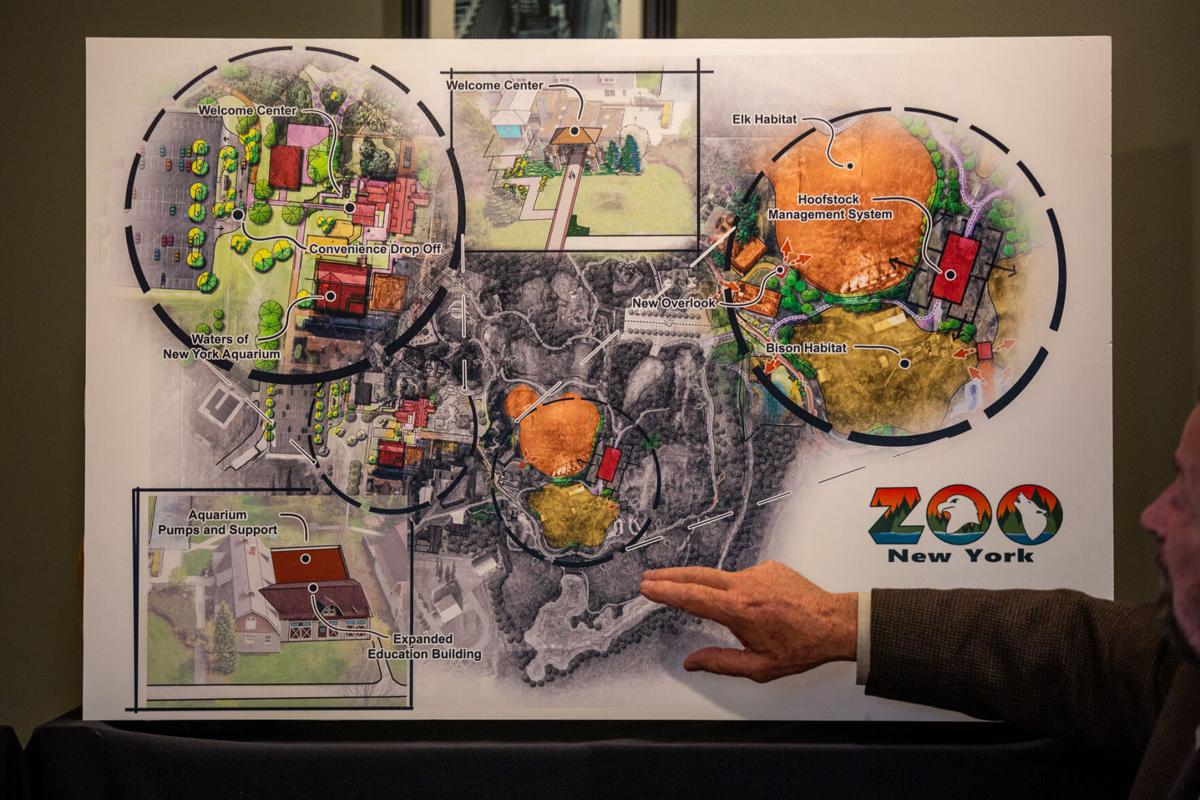 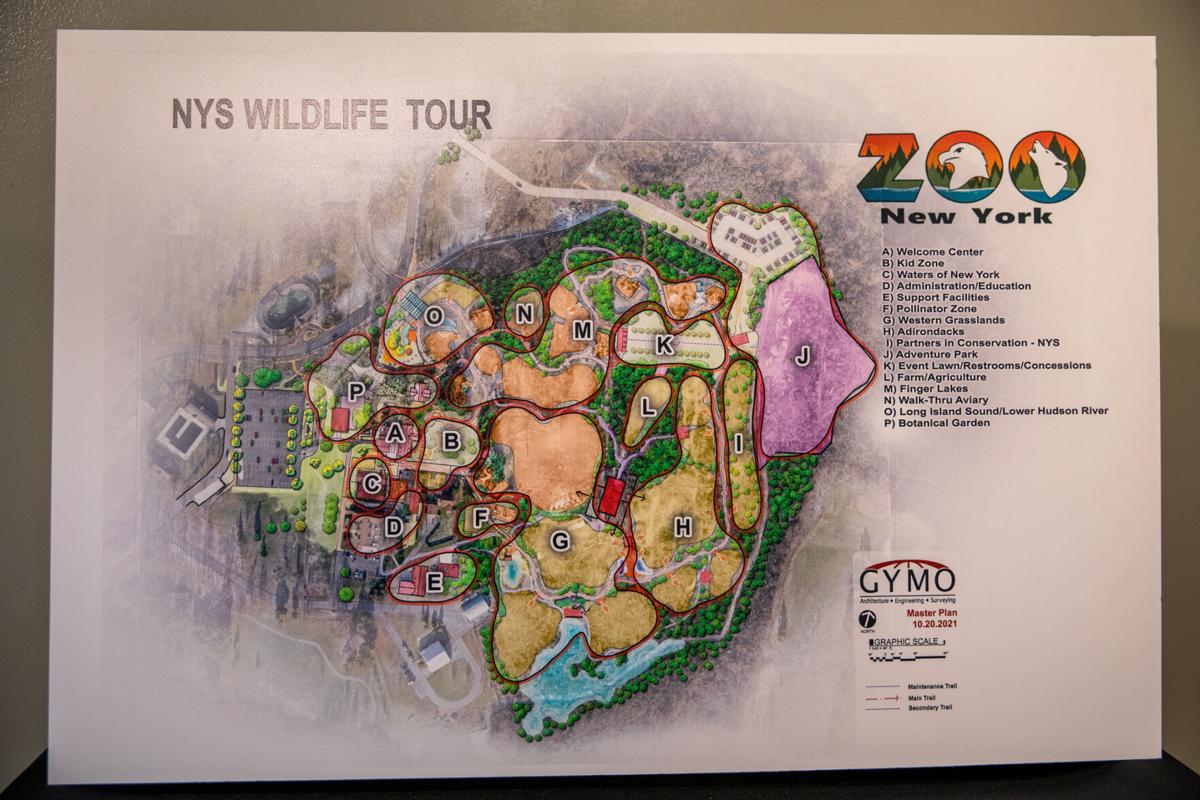 Master plans for Zoo New York are unveiled at a news conference at the zoo in Watertown on Wednesday afternoon. Kara Dry/Watertown Daily Times

Master plans for Zoo New York are unveiled at a news conference at the zoo in Watertown on Wednesday afternoon. Kara Dry/Watertown Daily Times

“We are very much a community, grassroots zoo, but we cannot look at what we were 30 years ago, we have to look at we want to be 30 years from now,” Chief Executive Officer Lawrence J. Sorel said.

Some new potential species include elk, moose, bison, caribou, ducks, geese and other large land-based birds, as well as animals from the Long Island Sound.

Other new amenities included in the proposal include a new aquarium, improved food service, and even a new adventure park that will include a tree top ropes course, a zip line, and a natural play area of logs, rocks, and natural surface exploration.

“A large, natural playground, not powdered covered pipes and metal swings, but logs and rocks, mud if we can get away with it,” Mr. Sorel said of the proposed adventure park.

In the proposal, Mr. Sorel said that he wants the adventure park to have an extra parking lot so that it will be accessible to the public from Thompson Park, not just through the Zoo, and there will be fees “in some way.”

Also included in the proposal is a new walk-through bird aviary, which will allow for education on the different types of birds in the north country.

Zoo New York hopes to add animals from other parts of the state as well, specifically Long Island.

“A gem I think for the future is we want to talk about Long Island and bring in harbor seals, salt water aquariums, and talk about the habitats and animals that you’d find at the mouth of the Hudson River,” Mr. Sorel said.

Mr. Sorel said that he understands that some people do not visit the zoo because they do not like having animals in cages. However, he said that Zoo New York strives to be more than that.

“We know that zoos in the last decade or so have had challenges, particularly from millenials, who cannot accept simply keeping animals in cages for people to look at. That’s not what we want to be,” Mr. Sorel said.

Some of the existing exhibits will receive improvements. One that was mentioned specifically was the bear exhibit.

“They have outside block houses. That’s nice, they’re native animals, they can survive, that was the thought. But really what they should have is a building with stalls so we can clean and sanitize ... So that you can manage the health and welfare of the animal easily and properly without having to constantly be fighting the elements,” Mr. Sorel said.

The total cost of all of the phases is unknown, however, the total cost of phase one would be around $6 million with $3 million for the aquarium, education and support facilities. The zoo hopes to have fundraising from government funding, grant funding, and private individual funding, but were unsure of how it would look.

The plan will be brought up at the board meeting, which will then in the December board meeting will allow for it will come up for official adoption, then the proposal will have to be approved by the city of Watertown as the City owns the property.

By inside stalls for the bears, do you mean cement floors and bars on cages, such as we had before?

What about adding botanical elements?