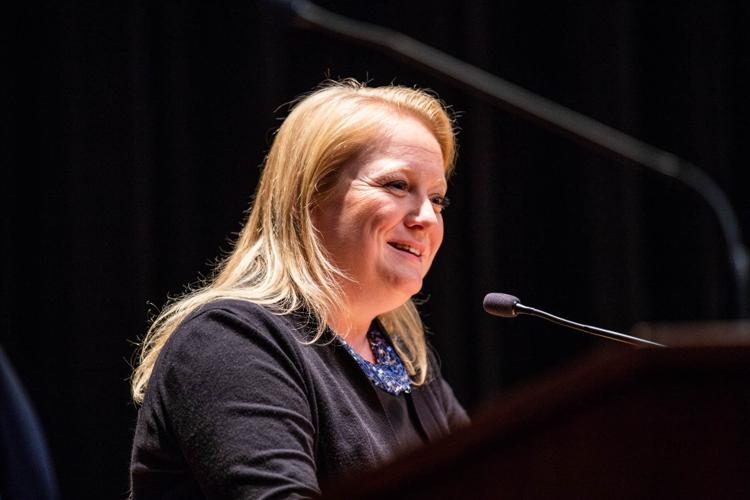 Assemblywoman Addie Jenne of the 116th District speaks during her opening statement Monday during a debate against Republican candidate Mark Walczyk at SUNY Canton. 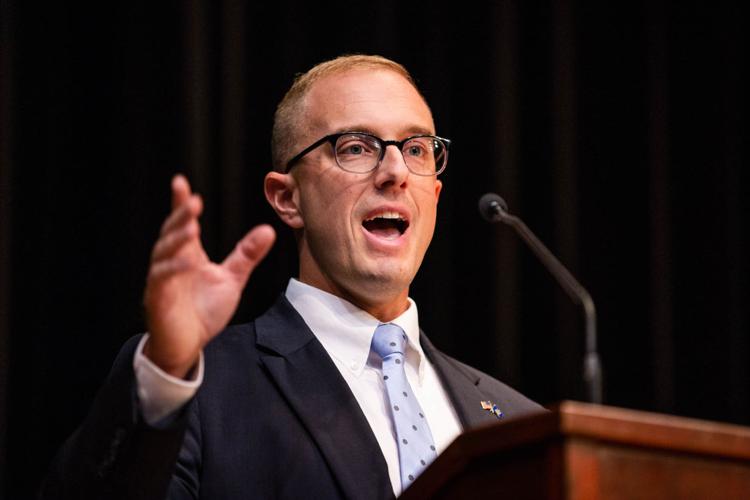 Assemblywoman Addie Jenne of the 116th District speaks during her opening statement Monday during a debate against Republican candidate Mark Walczyk at SUNY Canton.

“I am the seventh generation of my family to call the north country home,” she said. “I know first hand the struggles we have here ... I know our strengths too and I was raised with a can-do attitude.”

Mr. Walczyk began his opening statement by asking the audience a question.

“Are you better off in Northern New York after ten years of having Addie Jenne in office, or do you want some new blood in there?” Mr. Walczyk said. “I believe government exists to protect our freedoms, and not restrict them.”

The three panelists, Tom Graser of the Watertown Daily Times, Keith Benman of WWNY-TV 7 and David Sommerstein of North Country Public Radio took turns asking questions of the candidates. In brisk, one or two minute responses, the candidates covered unfunded mandates abortion, dairy, economics development and jobs, water levels on the St. Lawrence river and wind turbines and other issues.

Much of the debate revolved around economic issues — the dairy issue, economic development, and jobs.

“I am very active in the area of dairy policy because it is the cornerstone of our economy,” Ms. Jenne said. “They are incentivized almost to oversupply and then that drives their prices down.”

Ms. Jenne outlined her proposal — a guaranteed price floor of $18 per hundredweight if the milk meets higher quality standards that match those of the European Union, making the milk more eligible for export.

Mr. Walczyk said he was going to continue listening to farmers.

“I think whenever you hear Albany politicians talk about new taxes and new revenues that should be a red flag,” he said. “I don’t have a silver bullet solution for dairy farms.”

Mr. Walczyk was similarly skeptical of regional economic development programs, touting instead small business and his support from some small business organizations.

“Scrap ‘em,” he said. “Picking winners and losers is not the right thing for politicians to do with your tax dollars.”

Ms. Jenne was highly critical of the way economic development has been implemented so far by Albany with large influxes of cash.

“I work personally with the small businesses throughout the district,” she said. “We should be focusing on things like our maritime economy, our agricultural economy.”

One potential source of revenue that has proven controversial in both St. Lawrence and Jefferson counties has been wind turbines.

Ms. Jenne said it didn’t make sense to continue siting turbines while transmission lines out of the area are insufficient, especially with the interference turbines have on the radar at Fort Drum.

“The rush to site wind turbines right now is really unnecessary,” she said. “I have been the leading voice in the state Legislature to protect Fort Drum and its training grounds from wind turbines.”

Mr. Walczyk was more open to the idea.

“I respect home rule,” he said. “Some communities might want some windmills, and Fort Drum might be OK with them.”

For the River District, an important aspect of economic and recreational life is the water level on the St. Lawrence River, regulated by the International Joint Commission. Last year, flooding damaged docks and communities up and down the river. This year, the water level was criticized as too low. Both candidates expressed some skepticism about the Plan 2014 the Commission is implementing.

“It’s become very apparent to me there’s some flaws in how they handled it this year,” Ms. Jenne said, citing the fact that water levels were based off record rainfalls last year. “I believe this year political pressure was put on the commission.”

Mr. Walczyk said Albany was treating the river like the state’s backyard to store old equipment, but said the recent nomination of former Assemblywoman Jane Corwin to the IJC was positive.

“I’m hopeful for the future,” he said.

The perennial issue of unfunded mandates that Albany requires of local municipalities came up, with the county share of Medicaid being particularly unpopular.

Ms. Jenne said she supports moving Medicaid away from being funded by property taxes to being paid for by the income tax. As for the state taking over Medicaid, she said it was a conversation that needs to happen, and has previously advocated a single-payer healthcare system for the state.

“I have supported reducing taxes on our middle class, capping property taxes in this state, bringing in additional resources to fund our schools, and I think it’s time to take that next step to save us money in healthcare and save our taxpayers from having to carry that burden,” she said. “I think that’s one of the big unfunded mandates we need to take a stab at.”

Mr. Walczyk said that a lot of the mandates are coming from downstate and need to be reduced.

“I think the two percent tax cap is critically important,” he said. “We can’t look for more revenue here, there is no more.”

With the recent addition of Brett Kavanaugh to the Supreme Court, there will likely be an increased push in Albany to make abortion rights state law next session.

Asked if they would support these and other bills in the Assembly, Mr. Walczyk largely avoided the question, choosing instead to speak more broadly to the fight over Judge Kavanaugh.

“I’m pro-life, but I think you nailed it — the tensions are very high in this country right now, and we need, as leaders to relieve this tension,” Mr. Walczyk told Mr. Sommerstein, who asked the question. “Women’s health over all is very important.”

Ms. Jenne said she would support the law, and talked more broadly about her support for healthcare and family protections, including family leave and domestic violence protection.

“I absolutely believe a woman has a right to choose what goes on with her body,” she said. “Access to healthcare, I believe, is a right, and attempts to roll back rights we have in this county and this state need to be stopped.”

Both candidates closed with their best pitch to the electorate.

“You’ve got business as usual in Albany over the past decade,” Mr. Walczyk said. “I want to see the entire region turn around … I hope you’ll join me.”

Ms. Jenne returned to her roots and her experience.

“I work for everyone in this district, whether it’s a small business struggling with red tape, or a young family struggling to pay the heating bill,” she said. “The only way we are going to turn things around … is to send people like me to the New York State Assembly.”

To watch the debate, visit https://www.youtube.com/watch?v=erL0Nl5bonw.