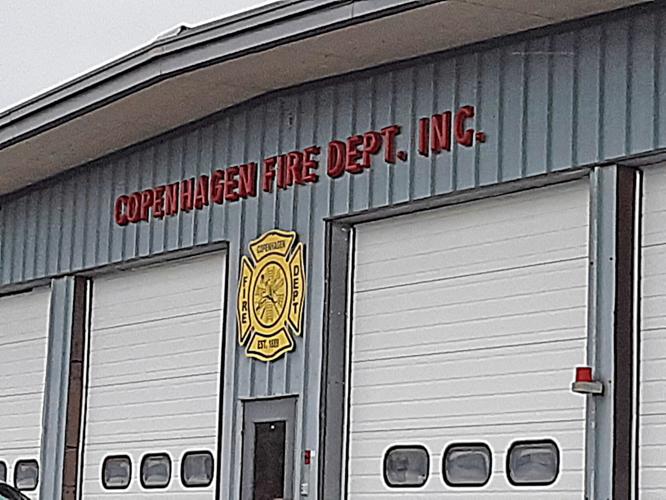 Audits of the Copenhagen Fire Department by the state Comptroller's Office and Public Employee Safety and Health, PESH, was released earlier this month. The audits, completed in 2021, found both accounting and safety infractions, respectively. Julie Abbass/Watertown Daily Times 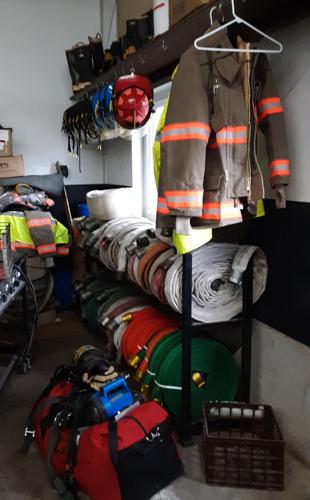 The Copenhagen Fire Department remedied a serious safety hazard created by improperly stored turnout gear after a 2018 after a state Public Employee Safety and Health, PESH, inspection. The 2021 PESH audit of the department found three "serious" violations - two involving training and one when two interior firefighters did not where safety gear while inside a burning building or at the fire site. Julie Abbass/Watertown Daily Times

Audits of the Copenhagen Fire Department by the state Comptroller's Office and Public Employee Safety and Health, PESH, was released earlier this month. The audits, completed in 2021, found both accounting and safety infractions, respectively. Julie Abbass/Watertown Daily Times

The Copenhagen Fire Department remedied a serious safety hazard created by improperly stored turnout gear after a 2018 after a state Public Employee Safety and Health, PESH, inspection. The 2021 PESH audit of the department found three "serious" violations - two involving training and one when two interior firefighters did not where safety gear while inside a burning building or at the fire site. Julie Abbass/Watertown Daily Times

LOWVILLE — Summer audits of the Copenhagen Fire Department by the state Comptroller’s Office and the state Public Employee Safety and Health Bureau (PESH) led to findings of inadequate bookkeeping practices and a number of “serious” safety risks. Village leadership has called a meeting to discuss the results.

“Department officials did not ensure that financial activity was properly recorded and supported, and that money was safeguarded,” the comptroller’s report stated as the key finding of the process.

The comptroller’s audit initially looked back at the fire department’s books from Jan. 1, 2019 to June 30, 2020, but the period was extended to Aug. 6, 2020, “to review certain disbursements,” the final audit report said.

Among the issues that led to the state auditor’s conclusion were a lack of board oversight of the department’s deposits, disbursements and accounts as required in the bylaws for both department and drill team funds; bank reconciliations that were late or not performed at all; missing receipts and other supporting documentation for payments; and a lack of checks and balances with cash accounting from fundraising activities relating to the drill team.

Although the report did not say that any funds were missing, auditors found that 74 “disbursements” from the department’s seven accounts totalling $27,334, “did not have adequate supporting documentation.” There was a total of 186 disbursements that added up to $110,469 during the audit period.

A savings account dedicated to getting a new fire truck and the Drill Team checking accounts were also reportedly not reconciled at all during the audit period.

The way cash donations and deposits were handled also raised some flags in part because sequential receipts with duplicates were often not issued for donations by the treasurer and were never issued by the Drill Team’s chief fiscal officer, or CFO, the audit report said. Reliable records were not kept about the source of deposits going in accounts.

The department treasurer throughout the audit period was Nicole Henry Bennett, daughter of the fire department’s current president and former chief, James Henry.

Mr. Henry is also the CFO for the Drill Team, which still does fundraising so members can continue to judge competitions around the state, although the team has not been allowed to participate in the events since 2019 after a village board determination.

As of Jan. 1, 2020, Drill Team bank accounts were handled by the treasurer along with the fire department’s funds consisting of taxpayer dollars, although the report found that the CFO also deposited cash donations and the proceeds of fundraisers as needed.

In July, Ms. Bennett was charged with first-degree falsifying business records, third-degree grand larceny and second-degree criminal possession of a forged instrument for allegedly taking $27,000 from her employer, Schwerzmann & Wise, P.C., where they began noticing “irregularities” in her bookkeeping in March.

Recommendations resulting from the audit included that bylaws and policies be changed to give clear guidance for accounting in the department and that those bylaws and policies be enforced, including monthly audits of bills with supporting documentation and account reconciliations by the three-person audit committee that is already required by current bylaws but had not been formed.

Most of the recommendations and cash accounting challenges were similar to the 2015 Comptroller’s Office audit findings and recommendations for the department, although the Drill Team funds played a larger role at that time when the team was fully operational. Mr. Henry was also the CFO for the drill team at that time, but a different treasurer handled department funds.

The fire department responded to the audit with a copy of its new financial policies, saying, “the Board of Directors is now well aware of its responsibilities regarding financial matters and will be overseeing both the audit committee and treasurer to ensure the policies are being followed.”

Fire Chief T.J. Williams said the audit committee is tracking down any documentation that was lacking as outlined by the state and that none of the former treasurer’s four family members involved in the department are on the audit committee.

The safety audit by PESH performed between Aug. 16 and Nov. 9, cited the department for three “serious” violations.

The citations claimed that seven firefighters “did not receive initial fire brigade training and education commensurate with the duties the members were expected to perform;” training was not frequent enough — annually for everyone but interior firefighters should get quarterly trainings; and that two firefighters did not wear their turnout gear while they were “performing interior structural fire fighting” on July 30.

Mr. Williams, who was not the chief during the audit period, said that while training is provided regularly for all firefighters, some of the firefighters who have been on the crew for many years did not receive the “initial training” the way it exists now and that finding trainers throughout the pandemic has been more of a challenge than usual.

He also claimed that state training records are not always kept over long periods of time and so are often not accurate for long-term members and firefighters who have moved around and changed districts.

A village special meeting will be held to discuss the audits’ conclusions at 6:30 tonight in the cafeteria of Copenhagen Central School, 3020 Mechanic St.

Both audits were released at the end of 2021 and made public recently.