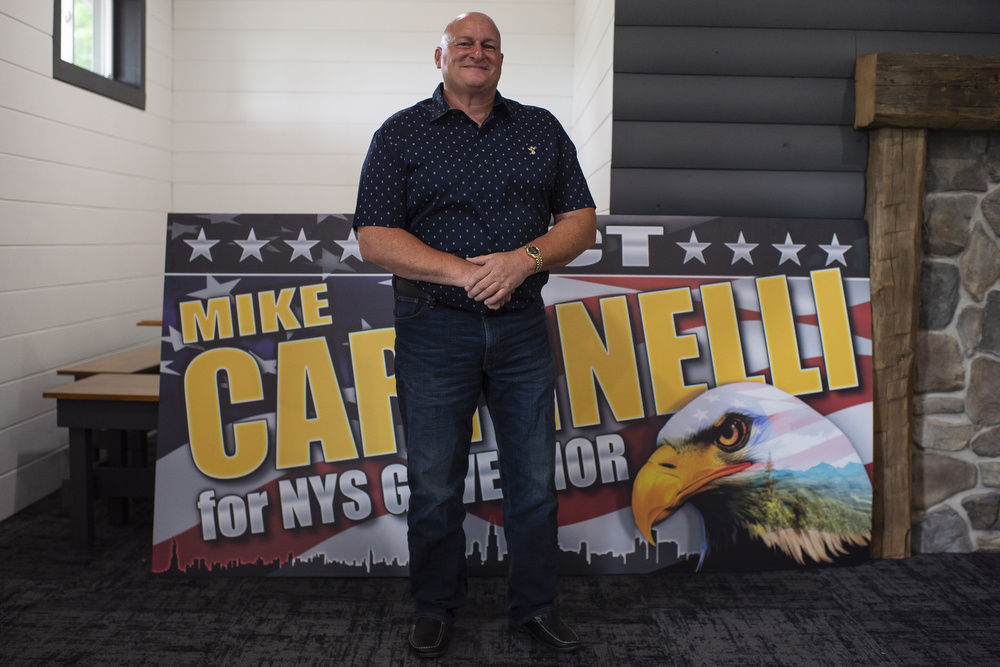 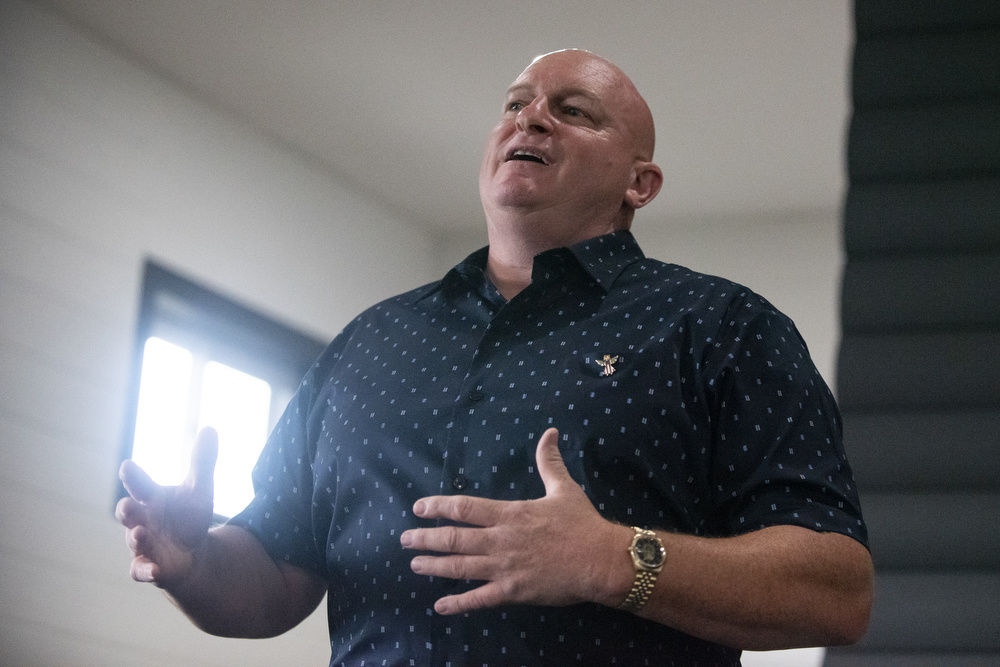 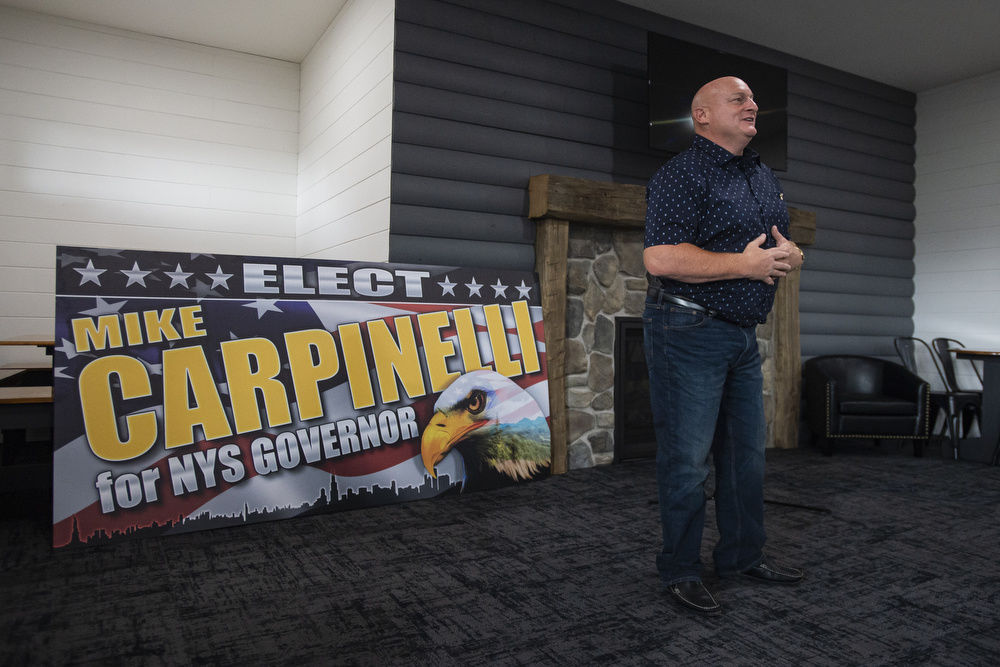 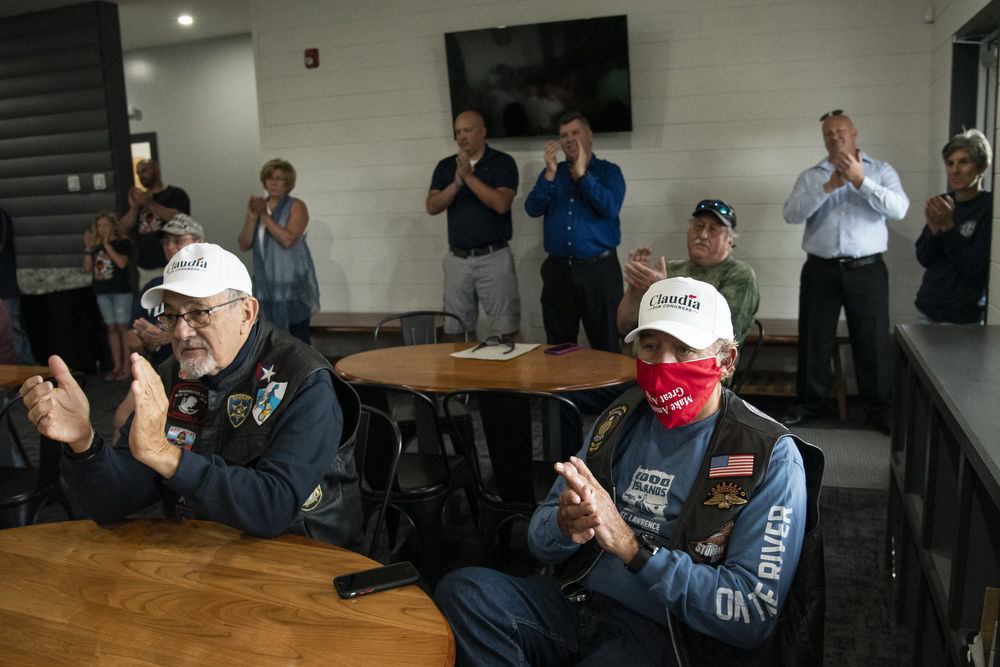 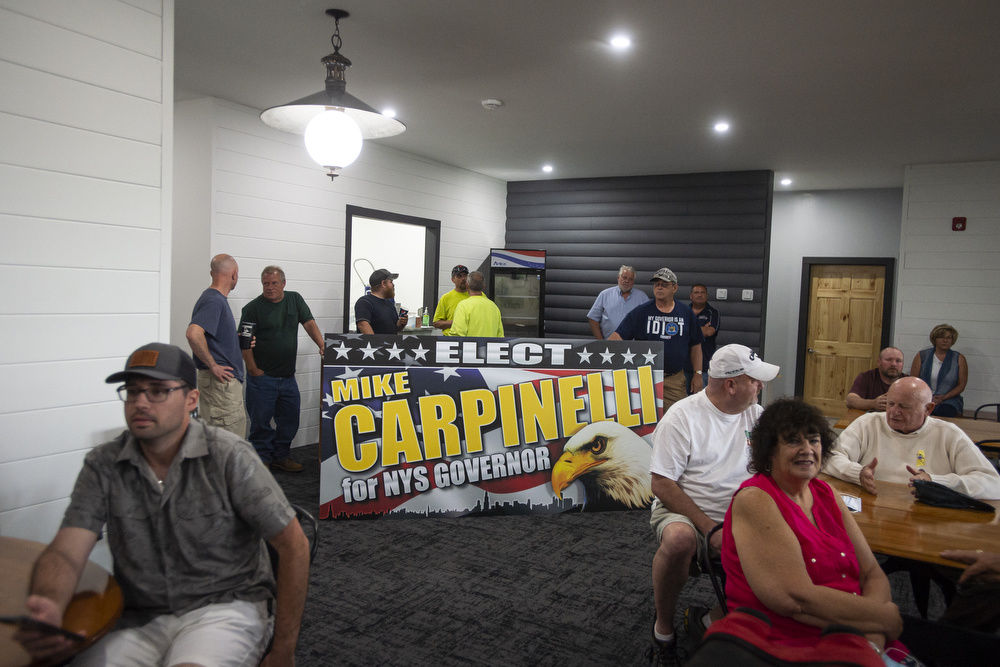 Attendees gather in the main room prior to the start of a news conference put on by Michael P. Carpinelli at the Osceola Tug Hill Cross Country Ski Center in Osceola on Wednesday. Mr. Carpinelli officially announced his run for New York state governor in 2022. Emil Lippe/Watertown Daily Times 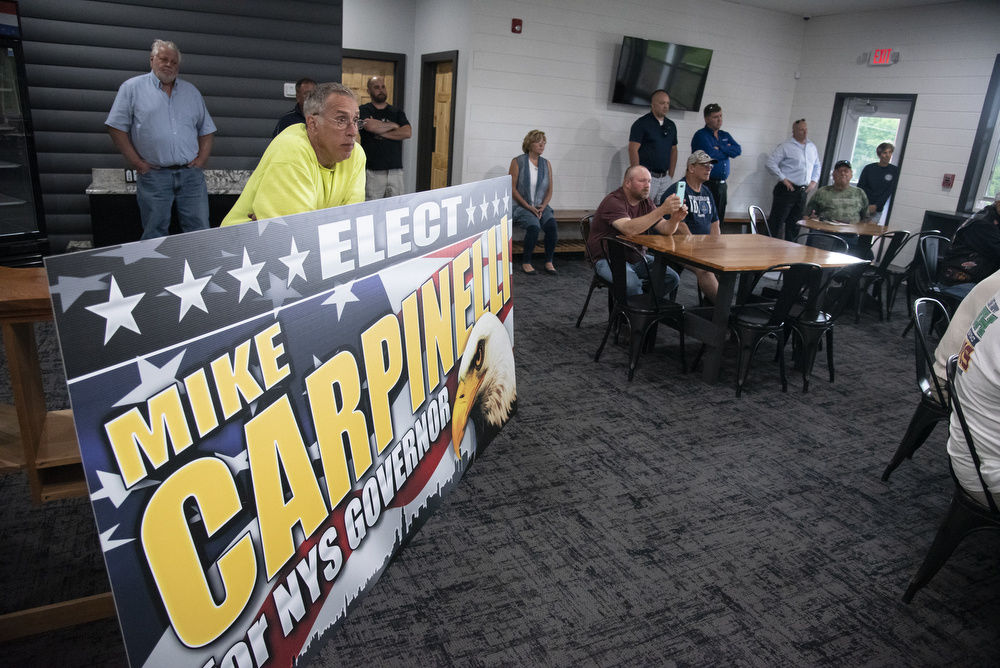 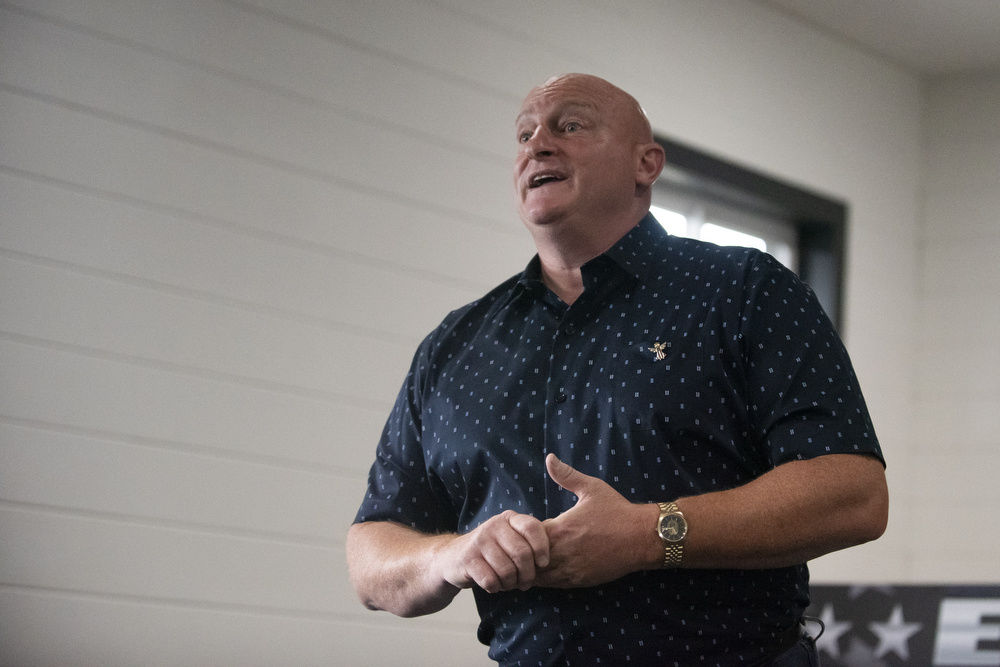 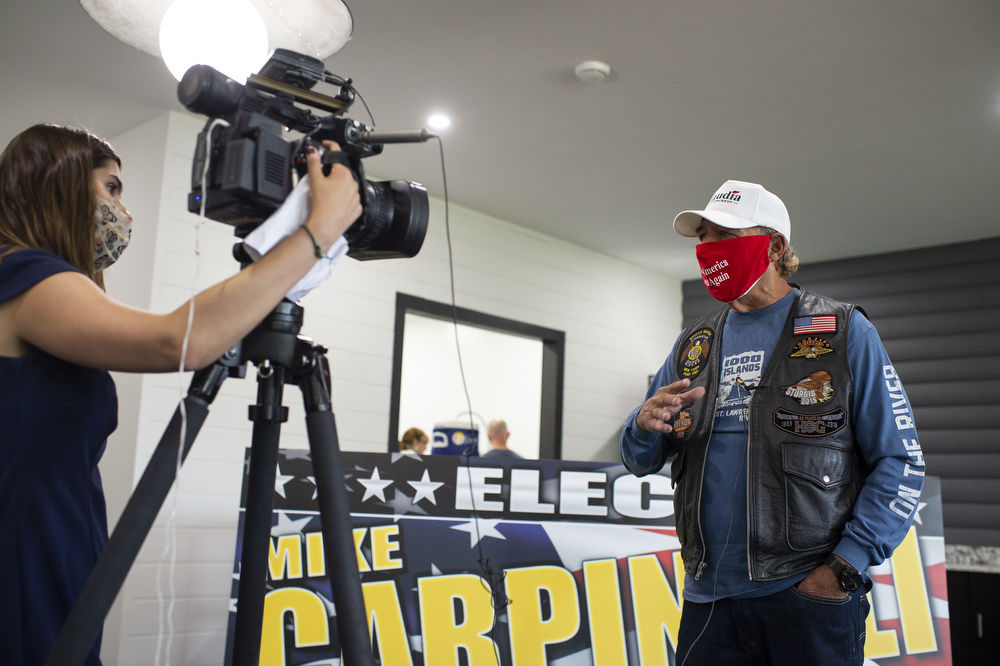 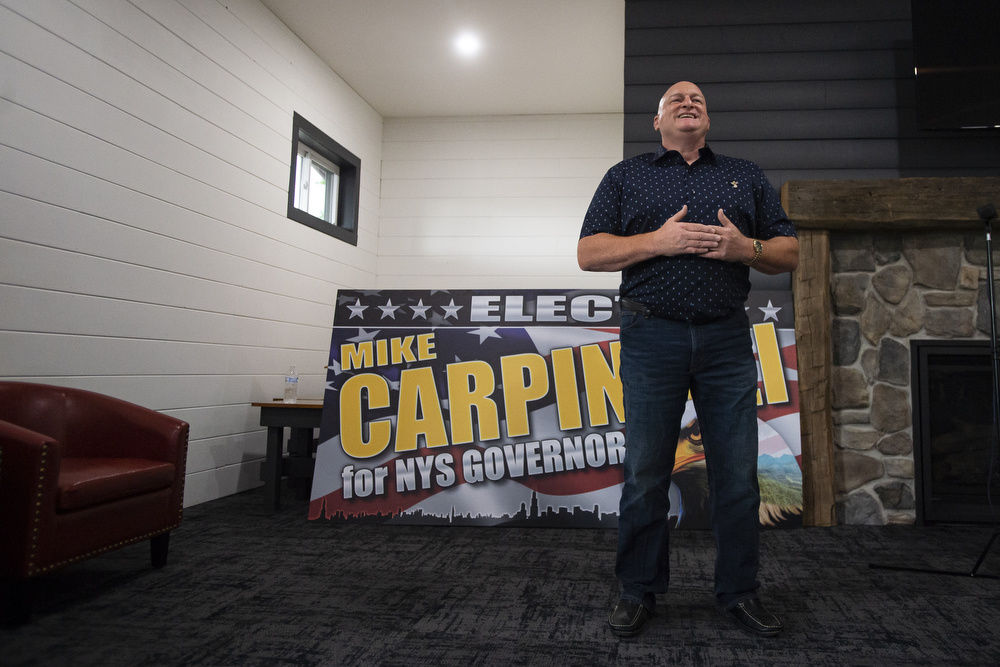 Attendees gather in the main room prior to the start of a news conference put on by Michael P. Carpinelli at the Osceola Tug Hill Cross Country Ski Center in Osceola on Wednesday. Mr. Carpinelli officially announced his run for New York state governor in 2022. Emil Lippe/Watertown Daily Times

OSCEOLA — Lewis County Sheriff Michael P. Carpinelli officially announced he will be seeking the Republican nomination in the gubernatorial race in 2022.

In a news conference held Thursday morning at the Tug Hill Cross Country Ski Center on Osceola Road, Mr. Carpinelli told the audience of about 25 people of his intention to enter the race.

Hailing from Kingston in Ulster County, Mr. Carpinelli said he attended community college there and served in the Army before joining law enforcement in New Paltz. He eventually moved to Rochester and worked in law enforcement there, too, until his retirement in 2006, when he moved to Osceola.

For almost six years after coming to the area, he worked as a part-time deputy for the Lewis County Sheriff’s Office, until he was elected sheriff in 2011.

He ran unopposed and was elected for the third time in November, although his supporters have said on social media they knew of his plan to run for governor for the past year.

Mr. Carpinelli, who was the Republican state campaign co-leader in the 21st Congressional District for President Donald J. Trump during the 2016 election, echoed variations of the president’s campaign slogan throughout his own speech by saying he wants to “make New York great” and make people say “I love New York again.”

Referring to himself as “a conservative Republican originally,” Mr. Carpinelli said he was endorsed by the Republican, Conservative and Democratic parties in his first race for sheriff in 2011, but “of course after being four years in office, you know what happened.”

Mr. Carpinelli has been outspoken against Democrats and, particularly, Gov. Andrew Cuomo, concerning gun control laws like the New York SAFE Act and has referred to the governor’s executive orders during the COVID-19 crisis as “unconstitutional” and “unenforceable.”

During his announcement speech, he did not mention the governor by name, but alluded that the state is “under a regime that has not been a fair representative of everyone, hasn’t been fair at all to the police community or all first responders.”

He did not give further explanation of the claim.

In December 2018, Gov. Cuomo gave a speech at the state Bar Association in which he said, “Let this agenda be New York’s Declaration of Independence. We declare independence from this federal government’s policies. We disconnect from the nationalism, and the racism, and the chaos, and the xenophobia, and the misogyny, and the discrimination, and the dissembling of this Washington administration.”

Mr. Carpinelli said he started his campaign early to “give people hope” and in order to have plenty of time to get his message out across the state in preparation for gaining the 15,000 signatures needed to run.

“As they say, let’s take this train, let’s get it on the tracks, let’s set it up straight and let’s get back to where we say we love it again. I want to hear we love New York again. It’s a beautiful state, I want to go back to that. I want to love it. I want to see it grow. I want to see it prosper,” Mr. Carpinelli said by way of closing, “I want to see us all as a people work together. And we’re going to do this.”

Mr. Carpinelli said he will continue in his sheriff role, trusting his team to “continue to keep [Lewis County residents] safe” and he’ll still be at the office, getting away to campaign when there’s time.

A website is in the works with campaign information that will also allow contributions.

It's official residents of Lewis County. Don't forget to contribute to his campaign early and often.

Hi rockloper -- it feels like this is gathering momentum just in the past few hours!

I can just imagine how it started out:

Carpinelli was hanging out with his err... running buddies and the conversation got around to complaining about Cuomo. Then, in a flash of light, one said, "Mike, you'd make a better guvn'r than Coumo. Why don't you run?"

Not the least bit our of breath from all that "running," Carpinelli gave the idea a nanosecond of thought and agreed. Another star was born!

There is no county and no constituency more respected for well, lots of things... than Lewis County. I remember well what I was told about Lewis County before I came to the area. Something about well, let's not go into all that.

Anyway, I agree. There is no better way for Carpinelli's supporters to spend their money than to plunk it all down for his winning campaign. So much winning!

[beam][thumbup] Well I gotta say I grew up in Lewis County and it was an excellent place to grow up in the 50's and 60's. A lot of nice people there at that time for sure. I honestly think as the country went after the emergence of the tea party so has Lewis County - really too bad.

Lewis Co. is beautiful. I have met some wonderful people there. You are right -- the tea party types changed the atmosphere when they came along. Some of the people I met said the same thing.

I still love to go hiking there.

As usual the republicans do an about face cause it doesn't fit ignorant agenda. Staes rights? Who ever preached for state's rights? This will end up the same type of ****show as did the Buffalo Buffoon golisano.

Oh please, be serious! When has Carp done anything stupid or untoward. He has benn a model of public service for the people of the county! I'd kiss him on his big bald head to run for Gov!

I hope you saw my post on contribution limits. He's going to need money make an impact in the race for governor. Donate early and often.