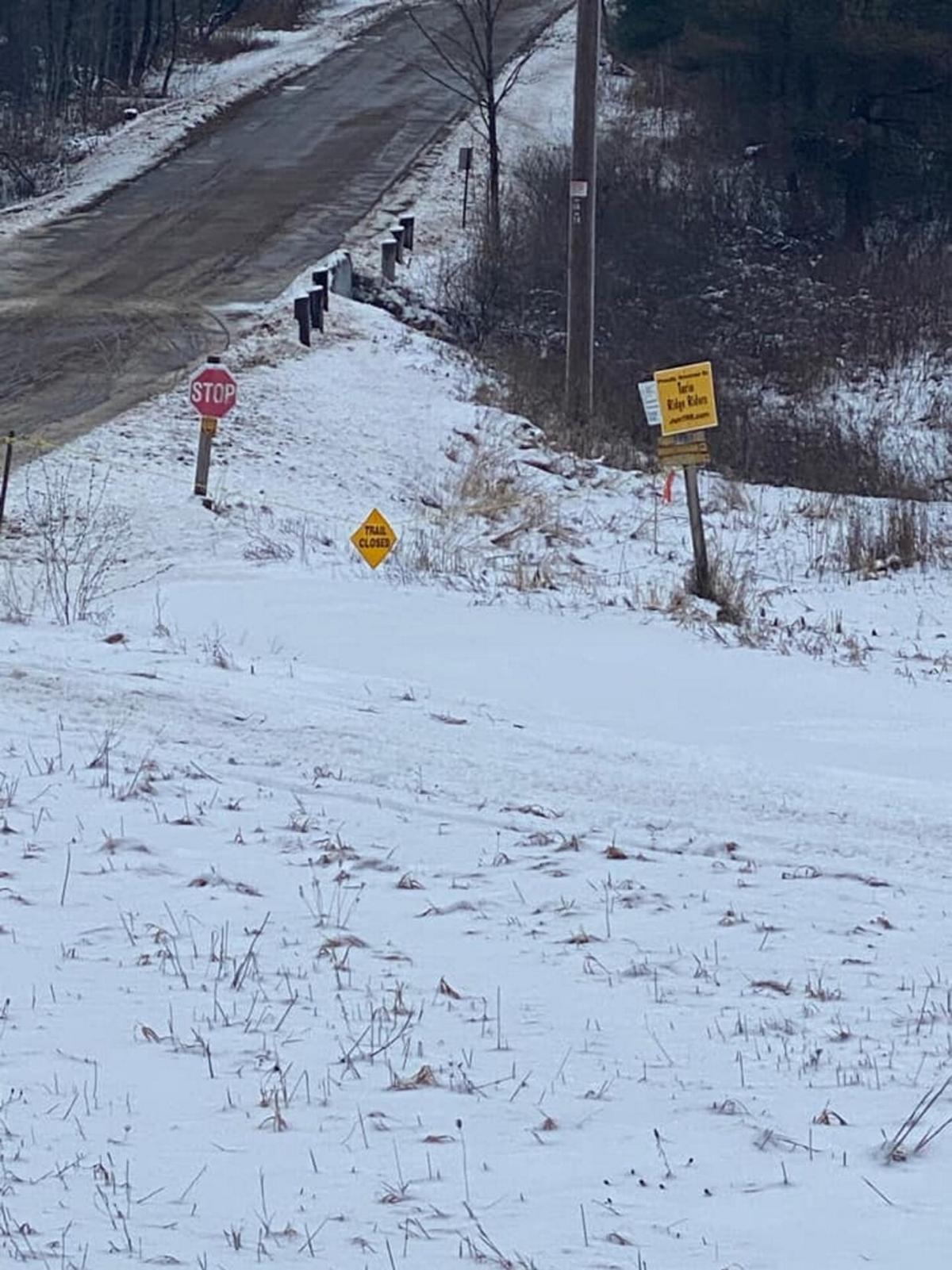 Low-lying sections of the snowmobile trails that connect Brantingham to Tug Hill were closed this week because of the lack of snow. Not all riders obeyed the signs. Provided photo 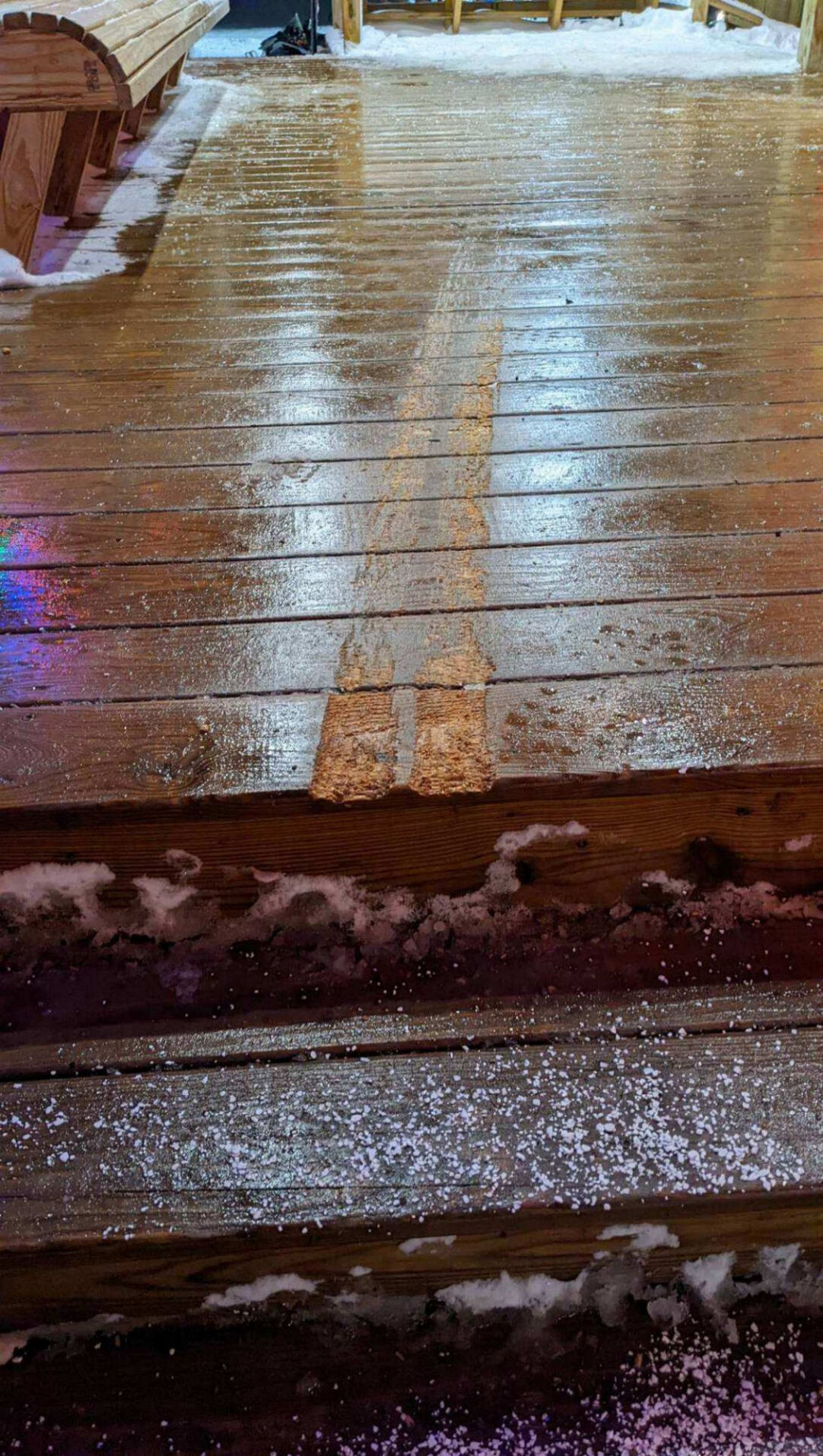 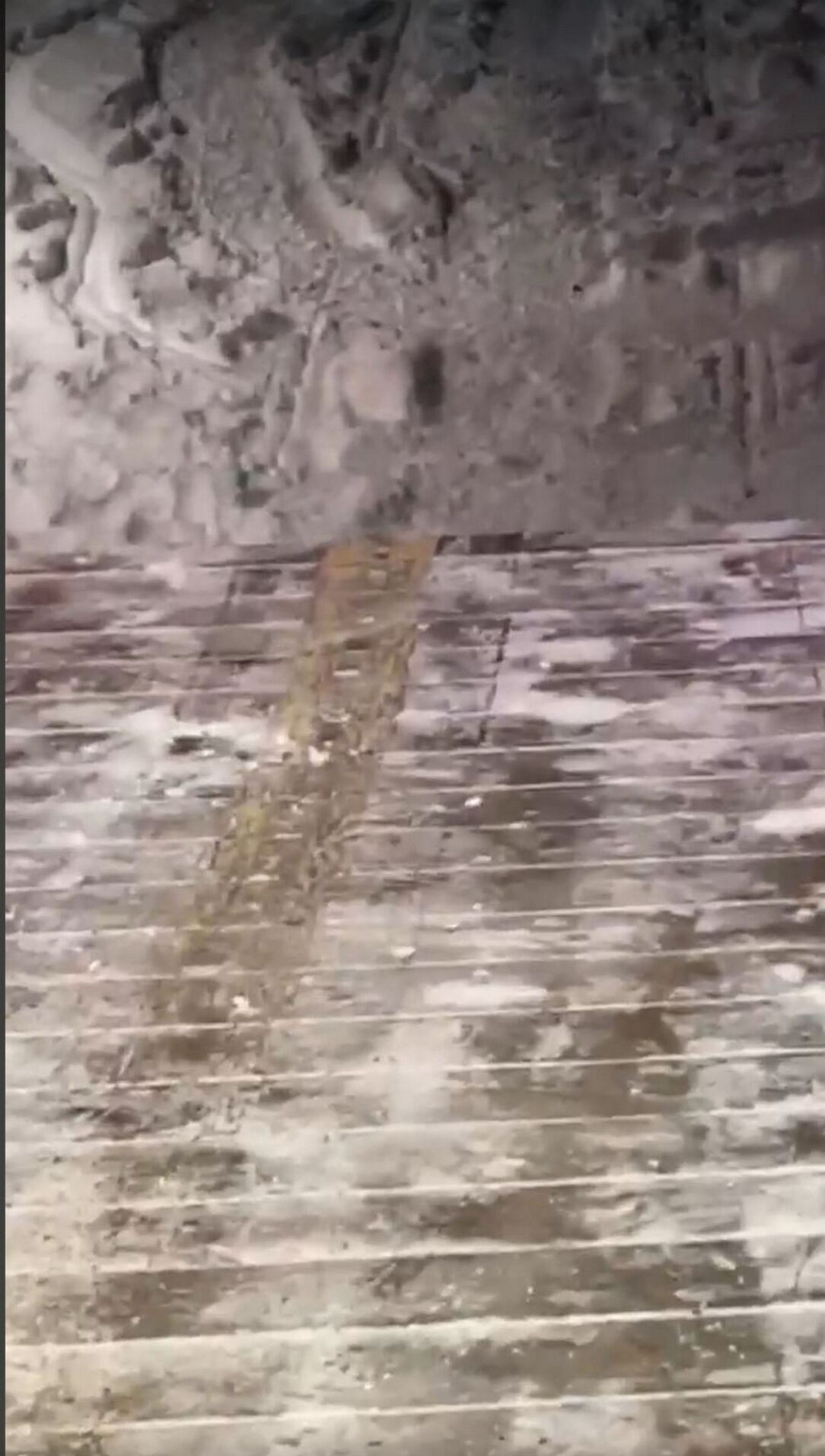 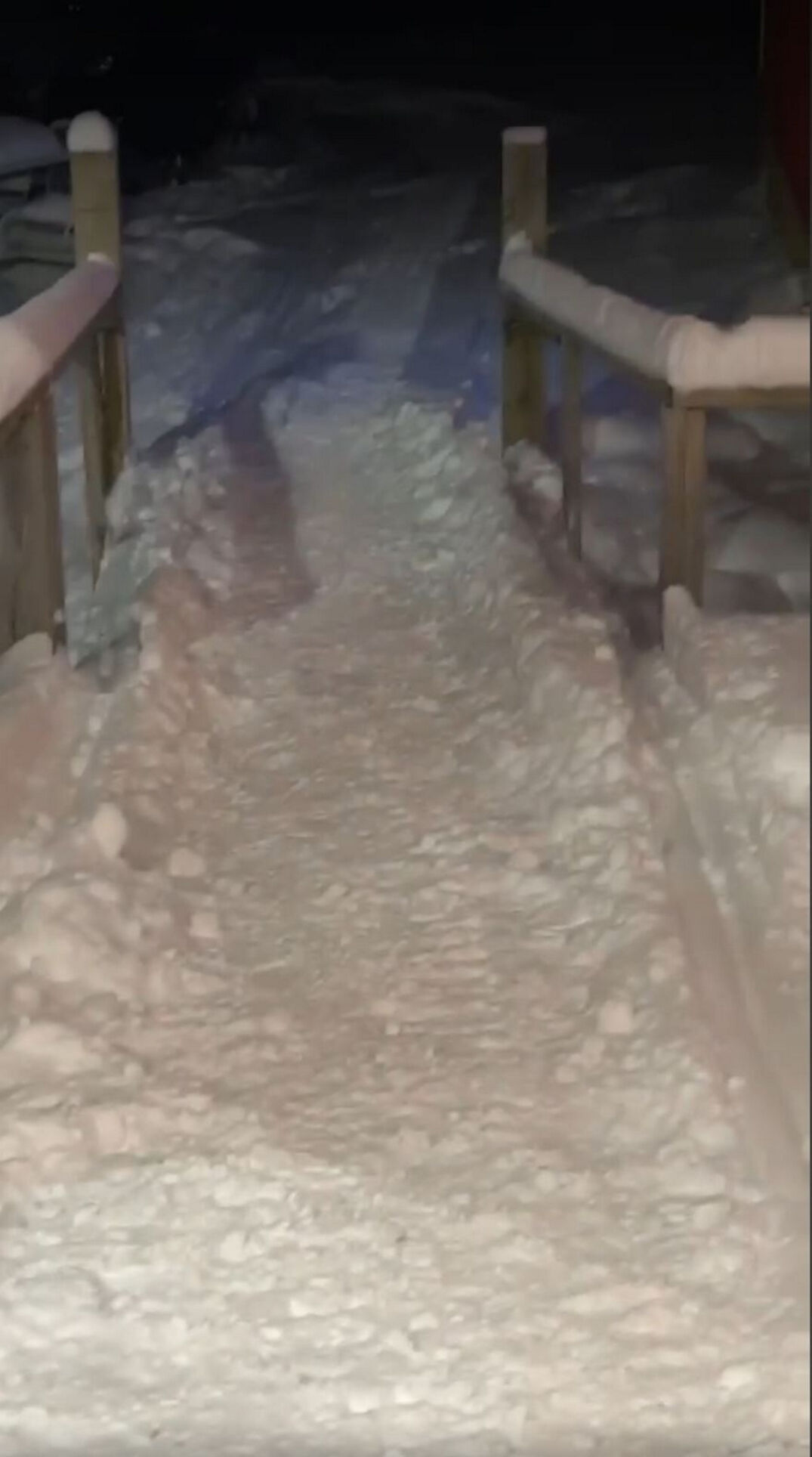 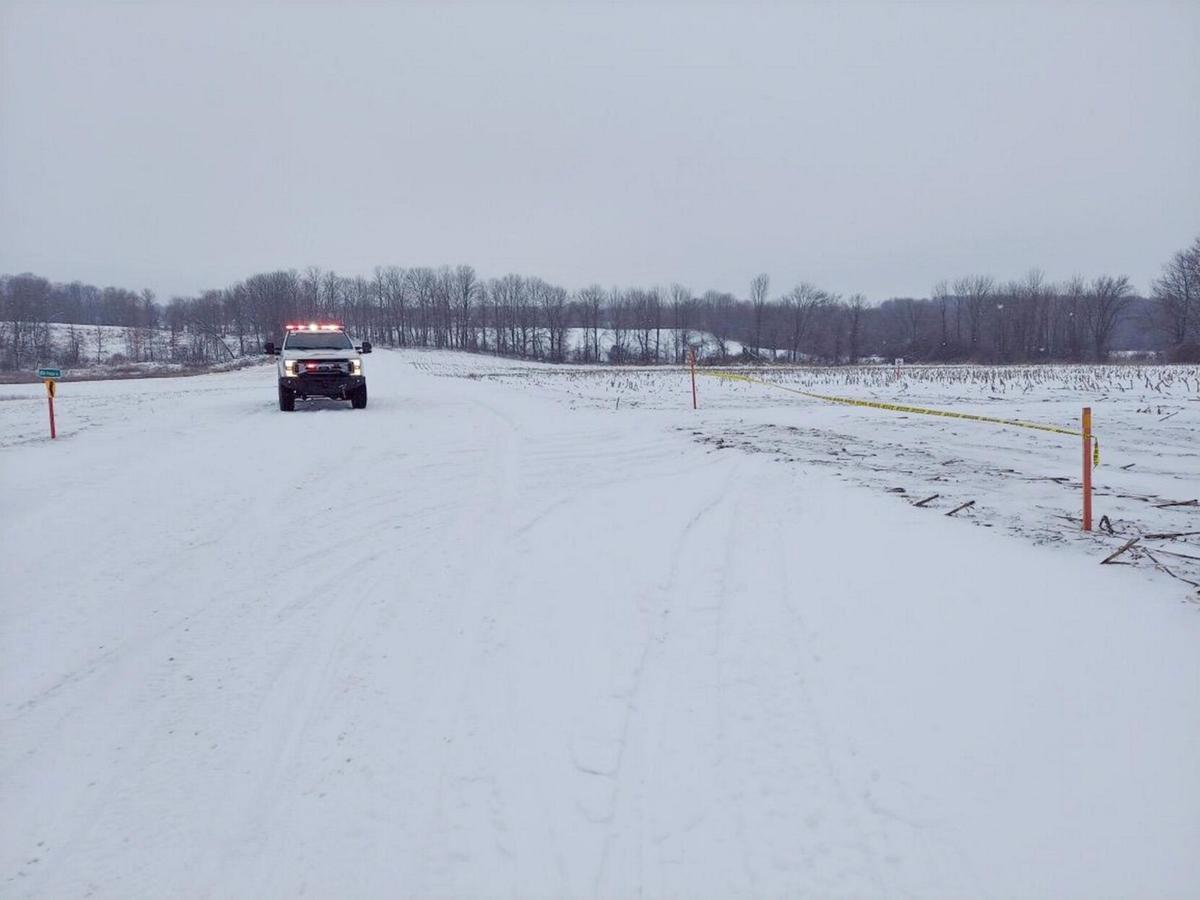 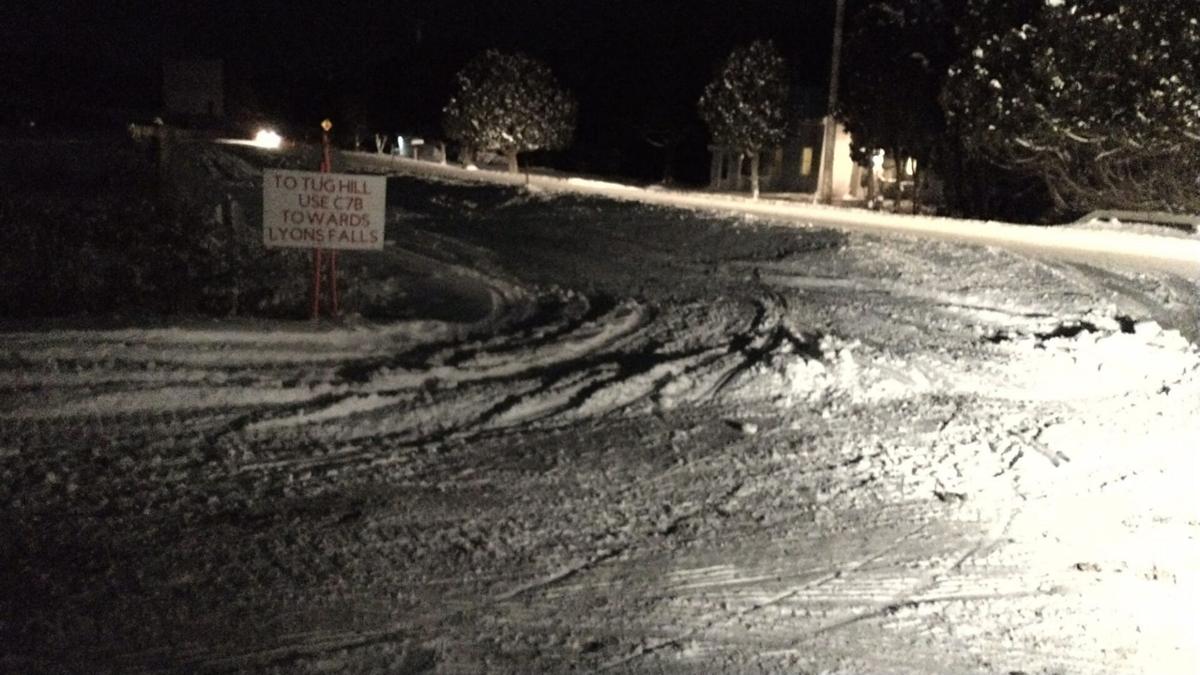 About 500 feet of trail groomed by the Brantingham Snomads connects closed trails, but many snowmobilers didn’t obey the redirection sign. On social media, riders said the sign should have clearly stated the trail was closed along with the redirection. Provided photo

The Tug Hill Ridge Riders’ trail map indicates the status of their trails, including which ones are closed. Provided photo

Low-lying sections of the snowmobile trails that connect Brantingham to Tug Hill were closed this week because of the lack of snow. Not all riders obeyed the signs. Provided photo

About 500 feet of trail groomed by the Brantingham Snomads connects closed trails, but many snowmobilers didn’t obey the redirection sign. On social media, riders said the sign should have clearly stated the trail was closed along with the redirection. Provided photo

The Tug Hill Ridge Riders’ trail map indicates the status of their trails, including which ones are closed. Provided photo

LOWVILLE — Despite pleas before winter began for respectful riding from snowmobile clubs, law enforcement and riders near and far who love trails in Lewis County, two incidents this week had tempers flaring and social media buzzing.

At 8:30 p.m. Tuesday, a member of a group of six sledders from near Buffalo rode up the wheelchair-accessible ramp on one side of the porch at the popular Tug Hill Hook & Ladder restaurant in the town of Montague and “throttled it” as he crossed the deck to jump off the steps on the other side.

The new wooden deck, installed two years ago by restaurant owners Tony and Juanita Young, was free of snow, so when Harley R. Georgi ripped across the boards with the studded tracks of his black Polaris snowmobile, he shredded a path into the decking — and then he kept going.

The following day, Mr. Young posted footage from his security cameras on a number of Tug Hill and Central New York snowmobiler Facebook pages as well as the Hook & Ladder’s page asking riders to identify the then-unknown Mr. Georgi.

Many riders commented with anger and frustration on posts of a video that showed the damage from the ramp to the edge of the deck over the stairs. A number of those comments focused on how much the Youngs do for the community.

All the attention flushed out the rogue rider.

“Everybody got talking,” Mr. Young said. “If he really felt bad about it he would have come back the next day. I didn’t even put the posts on until Wednesday night and he appeared Thursday. To top it off, they (Mr. Georgi’s group of friends) tried to start a fight when they left and people were pissed off that he (Mr. Georgi) ran across the deck.”

Mr. Georgi and his group were staying at the Montague Inn a short ride away.

When Mr. Georgi surfaced, he left money at the Hook & Ladder with Mrs. Young, but Mr. Young, who wasn’t around when Mr. Georgi showed up, isn’t interested in the money. He wants the man to come back and fix the deck himself.

Although Mr. Georgi has tried to call, Mr. Young said he has yet to return the calls. He will, though, he said. Eventually.

“It’s unfortunate one bad apple makes them all look bad,” he said, “but I don’t think he’s going to come to my place any more.”

On Wednesday, confusion over some trail signs caused riders to take closed trails, angering a landowner and the snowmobile clubs trying to redirect traffic.

A directional sign placed by the Brantingham Snomads indicating what trail number should be followed to Tug Hill was ignored by some. The photo on the club’s Facebook page of the sign and the tracks of sleds that did not redirect brought up a debate about the clarity of the messaging.

Those who know the trails well said the redirection clearly meant the trail was closed, while others said it wasn’t clear because it didn’t actually say “trail closed” anywhere on it.

Up the trail some 500 feet, where the Turin Ridge Riders snowmobile club is in charge of the grooming, “trail closed” signs were placed in three locations to prevent riders on the farmer’s field with so little snow on it.

“That little trickle of rain we had really took a beating on the lower trails,” said Ridge Rider Vice President Joshua Leviker. “We all communicate all the time on these things and work together to close trails. There was one connector trail along the railroad tracks still open but as of today (Friday), we had to post them all closed.”

Mr. Leviker said that anyone who wants to go from Brantingham to Tug Hill or vice versa must do so by using a trailer to bring their sleds.

Without a deep enough snow base on agricultural fields, snowmobiles can damage property, which has caused many landowners in recent years to not allow trails on their land.

All landowners hosting trails do so as volunteers, with no compensation.