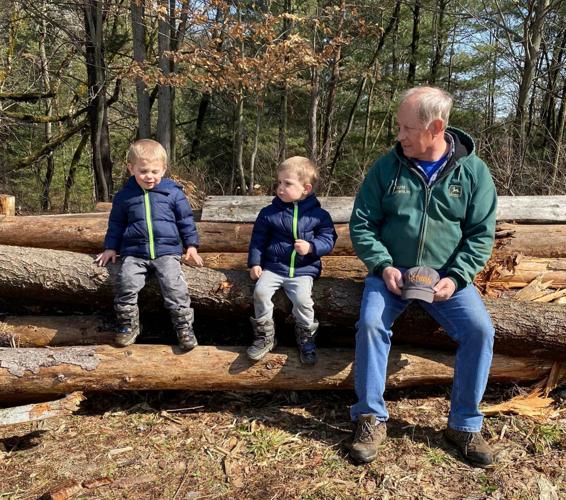 Nevin E. Moser sits with his twin grandsons on logs he cut from his wood lot in the town of Watson. Mr. Moser was harvesting wood there Wednesday when a toddler who had been lost for about four hours showed up on his skid steer path. Mr. Moser said the boy in a big red T-shirt was the same age as his grandsons, 3 years old. Provided photo 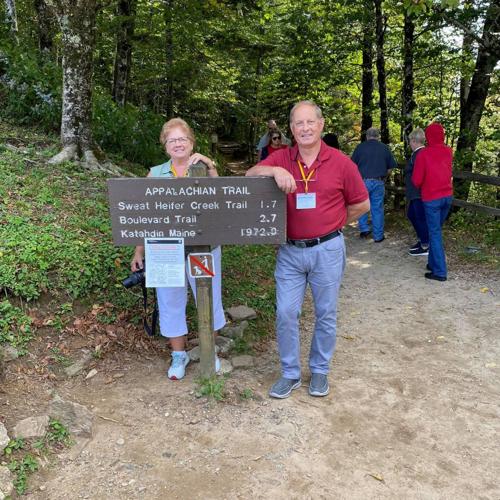 Nevin E. Moser is pictured with his wife, Virginia A. Moser, during an outing last year. Mr. Moser was logging on his wood lot in the town of Watson on Wednesday when a boy who wandered away from his home and was lost for four hours came up the skid steer path with a dog that never left his side. Provided photo

Nevin E. Moser sits with his twin grandsons on logs he cut from his wood lot in the town of Watson. Mr. Moser was harvesting wood there Wednesday when a toddler who had been lost for about four hours showed up on his skid steer path. Mr. Moser said the boy in a big red T-shirt was the same age as his grandsons, 3 years old. Provided photo

Nevin E. Moser is pictured with his wife, Virginia A. Moser, during an outing last year. Mr. Moser was logging on his wood lot in the town of Watson on Wednesday when a boy who wandered away from his home and was lost for four hours came up the skid steer path with a dog that never left his side. Provided photo

WATSON — In the right place at the right time, a Lewis County man logging in the forest off Number Four Road was “found” by a toddler who had been missing for more than four hours on Wednesday.

The words of a television newscaster earlier in the morning struck Nevin E. Moser, of Lowville, and evolved into a self-fulfilling prophecy.

“It went like this, ‘Coincidence is God’s way of staying anonymous.’ I told my wife I’ve got to write that down,” Mr. Moser said on Thursday. “I did not realize something like that may actually come into fruition just a few hours later.”

A 3-year-old boy’s mother called 911 at 10:15 a.m. to report that her son was missing. She said when she had checked on him early in the morning he had been asleep in his bed, according to a Lewis County Sheriff’s Office spokesperson. The family’s two dogs were also missing.

At 10:45 a.m., the out-of-town owner of a house about 100 feet farther down and across from the boy’s residence reported that his doorbell camera had recorded an image at 9:38 a.m. It showed a child with a bicycle and two dogs at the pond in front of his house, which is a few hundred feet up his driveway from the road.

The boy could be seen in the footage throwing stones into the water from a small dock on the pond with at least one of the dogs.

The sheriff’s office spokesperson said deputies were paired with rangers who had GPS equipment that recorded areas searched so there were no duplications. Simultaneously, an all-terrain vehicle was used to explore smaller side roads and trails near the house.

Mr. Moser said he saw up to 20 law enforcement vehicles near a house as he drove out to his wood lot about a mile farther down Number Four Road and about a half mile into the woods, but he didn’t know why they were there.

“I slowed down. I should have rolled down my window and asked but I did not know there was a boy missing,” he said.

He went about his work, alternating between using his chain saw to cut sections of log and stopping to split the wood.

At one point he thought he heard “a child or children” talking or yelling, but figured it could have been his hearing or maybe the grown children of his cousin who owns an adjacent lot were around. He continued sawing and splitting wood.

“The little feller I think was yelling at the top of his lungs as I think back. I could hear the sound but I don’t know what he was hollering,” Mr. Moser said.

At the time, he continued to work thinking if someone was lost, they would follow the sawing sounds and come his way.

“I think that’s exactly what he did,” Mr. Moser said. “(After sawing some more) I shut the saw off and had to look up and I saw a toddler standing there about 40 feet away with a dog.”

Mr. Moser greeted the boy standing on a skid steer trail and approached him carefully to not scare him, but the boy didn’t answer.

It was at this point Mr. Moser realized that the boy must be lost and the reason for the helicopter and law enforcement presence. But there was no phone service — not even 911 — so he could not let authorities know he found the child.

“I’m not so sure that I found him, but he found me,” he clarified.

The boy and his dog followed Mr. Moser to his truck where he gave them some water and opened the truck doors so they could get inside. The dog honored the request, but the boy refused.

“I couldn’t get him in the truck. He would not go. I didn’t want to pick him up and put him in. I didn’t know if that was the best thing to do because he’s probably been told not to accept rides from strangers, I’m thinking,” Mr. Moser said.

The boy, who was wearing an oversized red T-shirt, “was in good health, not crying not hysterical. Nothing. Just very stoic. He was a tough little feller,” Mr. Moser said.

After about 15 to 20 minutes, Mr. Moser said he spoke a bit more assertively to the boy to get him in the truck before he looked up at the chopper coming nearer. When he looked back down, the boy was gone.

“Oh boy, did he take off on me? I walked around the truck quickly and here he’s sitting in the back seat of my (3/4-ton) pickup. I called for the dog — he was right there — he hopped in and I closed the door,” the woodsman said.

Mr. Moser drove the boy and his dog to East Road at 1:51 p.m., stopping to speak to DEC forest ranger Lincoln Hanno and a sheriff’s deputy.

“I rolled down my window and said, ‘Officers are you looking for a little boy in a red shirt?’ and they said, ‘Yes!’ I told them I got him, he’s in the back seat,” Mr. Moser said. He then offered the boy some of the chocolate-covered graham cracker cookies he had sitting in his truck.

When EMTs and the boy’s mother came up the road, he said it was a “tearful reunion.”

“It came out good, it could have had a total different ending,” Mr. Moser said, adding, “Anybody would have done the same thing.”

Despite being bare foot and wearing nothing but a T-shirt, the boy only had some black fly bites on his face and was otherwise healthy.

A diaper he had been wearing when he left the house was found on a trail near the neighbor’s house with the pond, indicating the route the boy may have taken, but the sheriff’s office spokesperson said it would be difficult to tell whether he had wandered back to the road and up to the dirt road that led to Mr. Moser’s wood lot or if he went “cross lots.”

The second dog had reportedly returned home earlier in the morning.