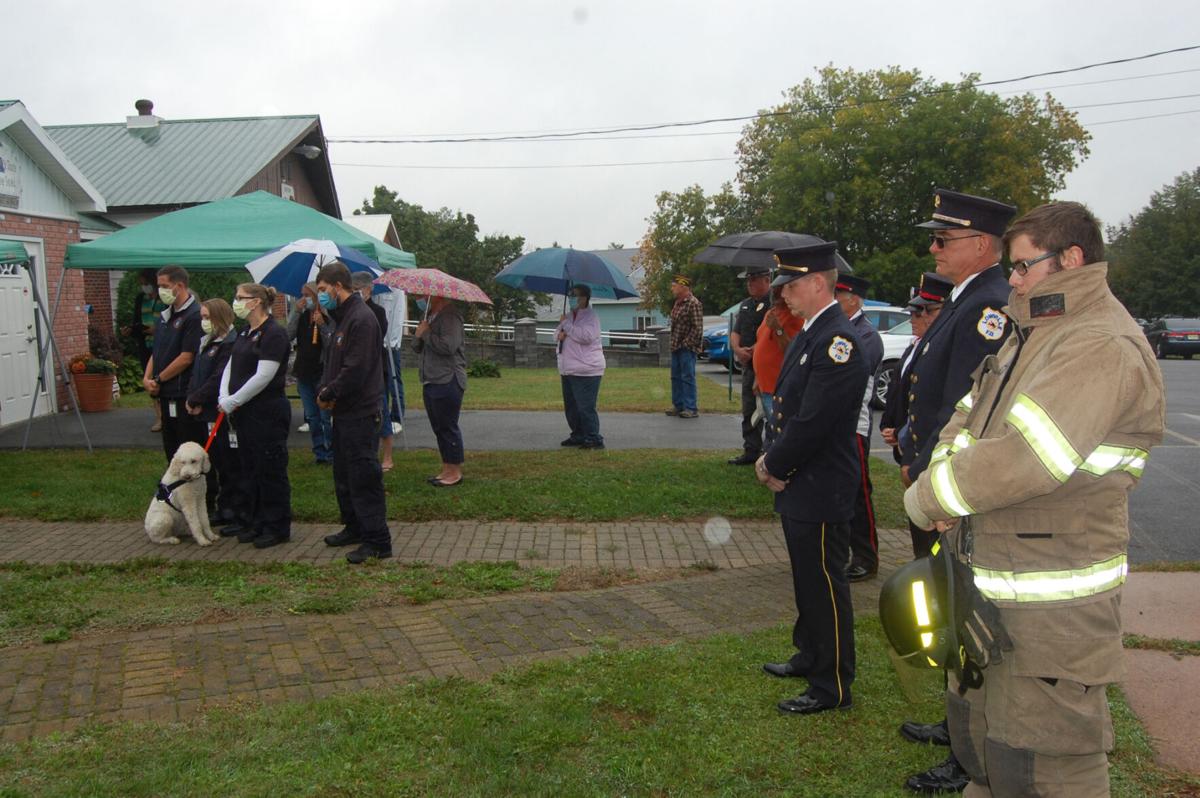 Representatives of local fire departments, Lewis County Search and Rescue, Veterans of Foreign Wars Post 6912 and its auxiliary paused for a minute of silence at 8:46 a.m. on Friday at the Lowville post to honor lives lost in the 9/11 attacks. Elaine M. Avallone/Johnson Newspapers 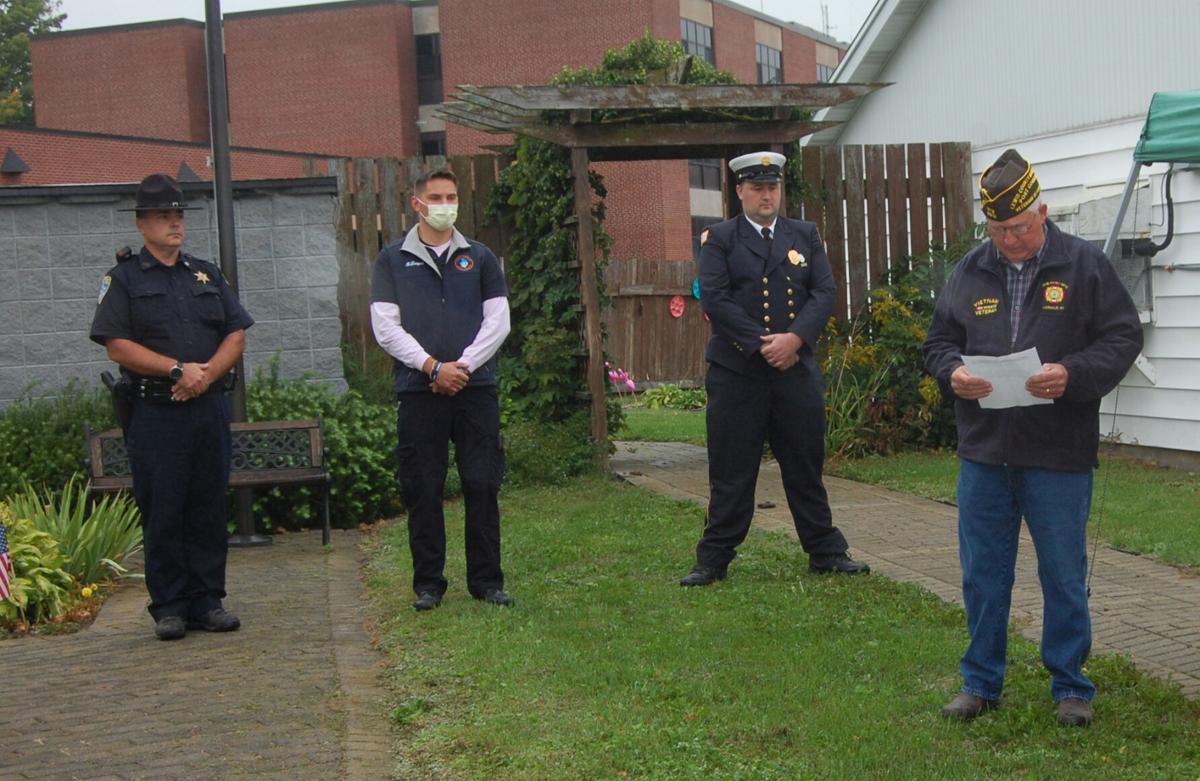 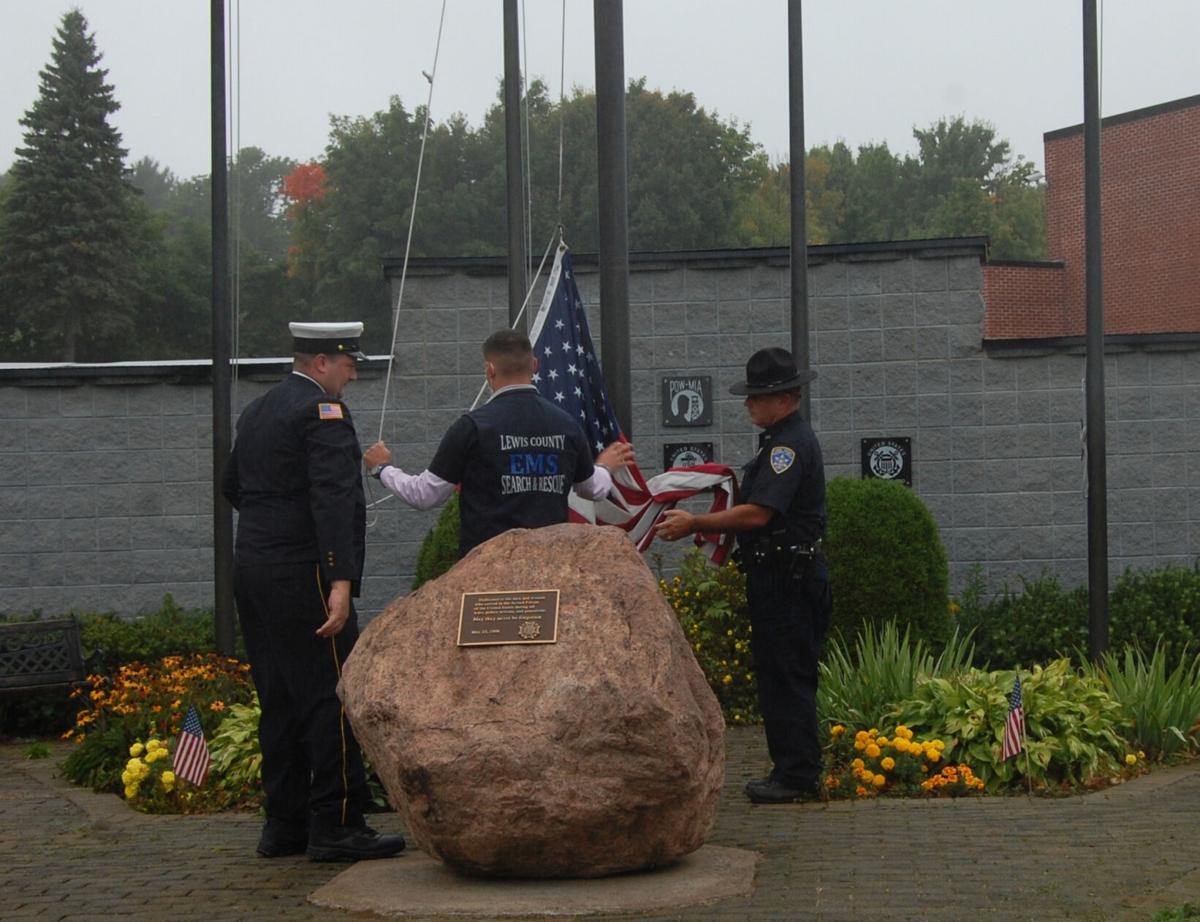 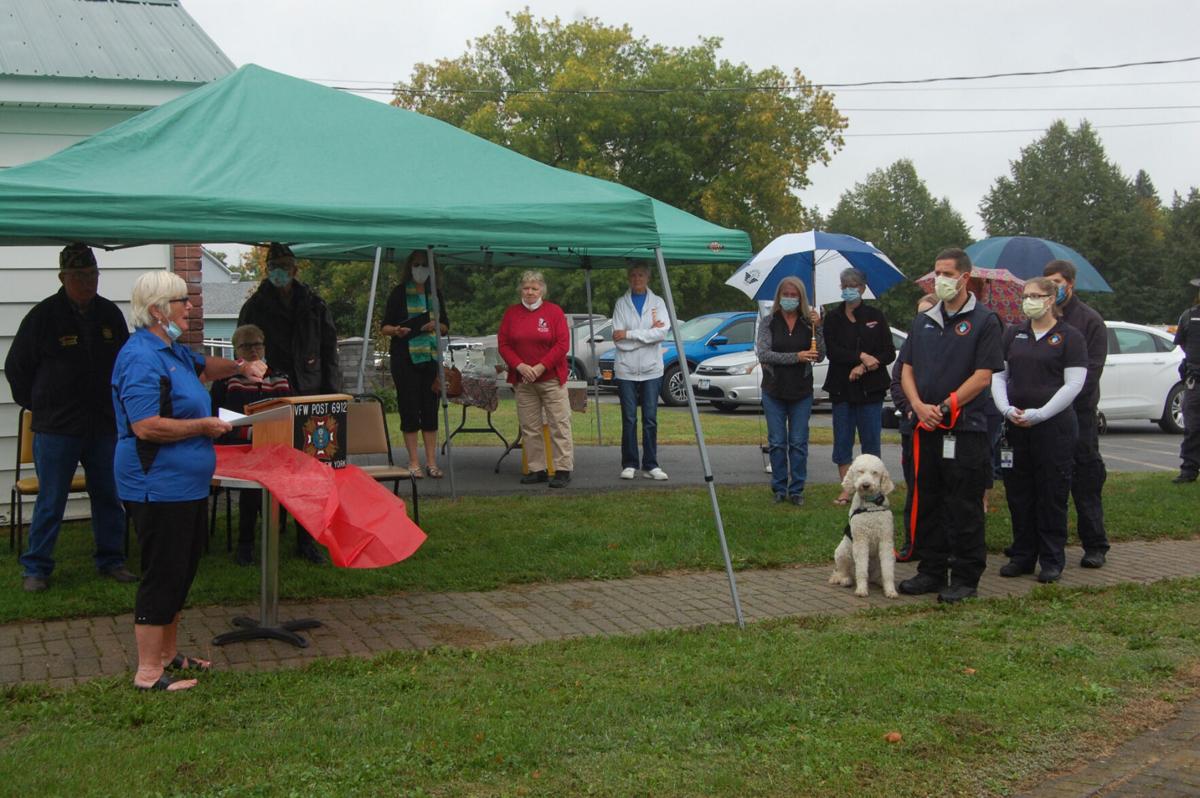 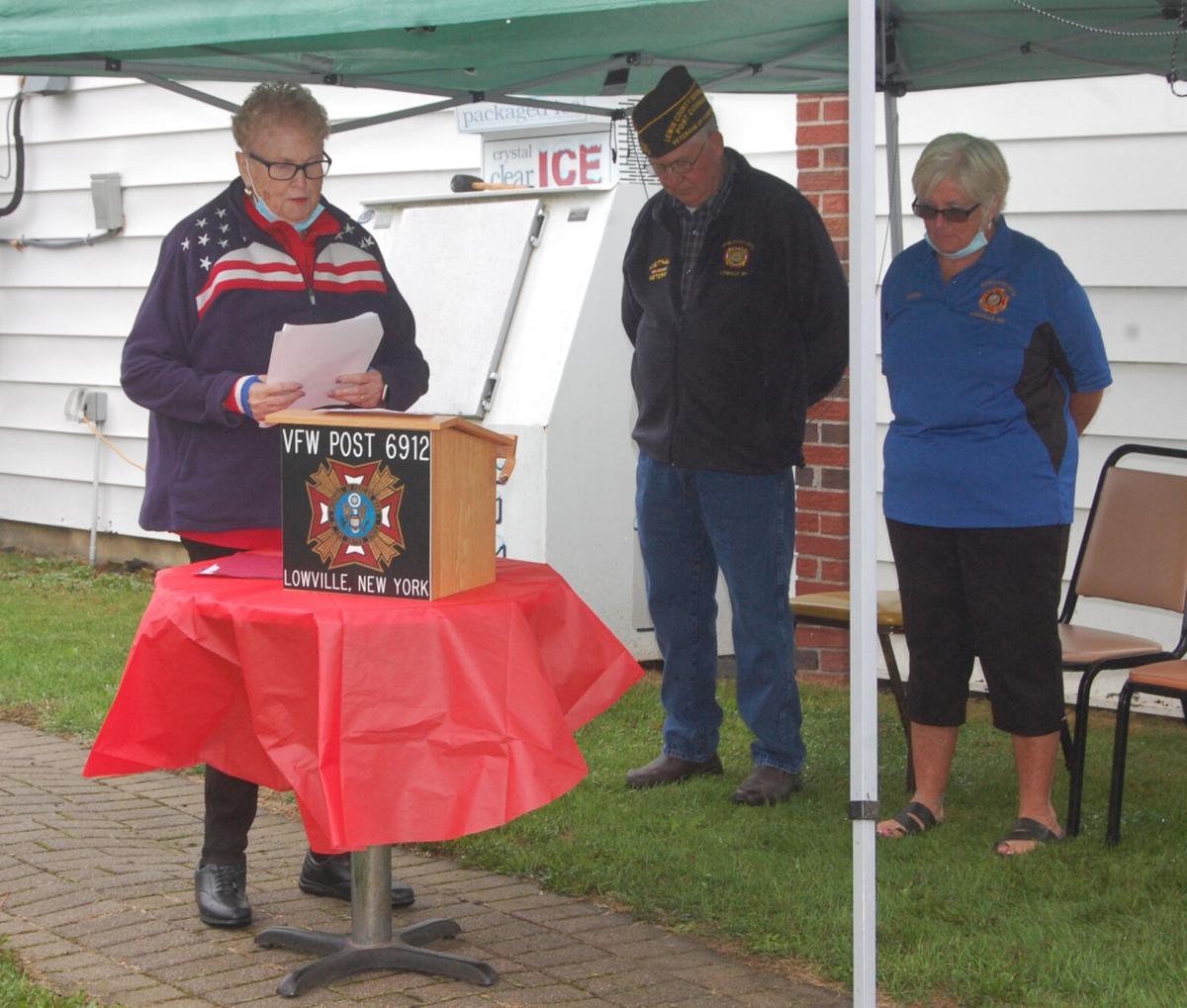 Representatives of local fire departments, Lewis County Search and Rescue, Veterans of Foreign Wars Post 6912 and its auxiliary paused for a minute of silence at 8:46 a.m. on Friday at the Lowville post to honor lives lost in the 9/11 attacks. Elaine M. Avallone/Johnson Newspapers

LOWVILLE — A mist of rain chilled the air, creating a very somber tone for the Friday morning ceremony at the Veterans of Foreign Wars Post 6912 Memorial Wall. About 40 people gathered to remember the 9/11 terrorist attacks which forever changed the lives of the American people.

Representatives of VFW Post 6912 and its auxiliary, local fire and police departments, and the Lewis County Search and Rescue Squad were on hand as VFW Auxiliary Chaplain Elsie Keefer opened the ceremony at 8:30 a.m.

“O God, our hope and refuge, in our distress we come quickly to you,” she prayed. “Shock and horror of that tragic day have subsided, replaced now with an emptiness, a longing for an innocence lost.”

Mrs. Keefer also spoke of the lives lost and the sacrifice of public servants.

Representative of first responder groups, Lowville Fire Chief Joe Austin, Sheriff Deputy Ray Ortlieb and Bill Ferguson of the Lewis County Search and Rescue raised and lowered the American flag to half mast as the crowd stood in silence. The playing of the national anthem followed and Mrs. Keefer, who is also the auxiliary’s Americanism chairperson, lead those gathered in the reciting of the Pledge of Allegiance.

Post Commander Dennis Everson, a Vietnam Veteran, spoke of the affects of the terrorist attacks in 2001.

“On this day, we remember the innocent who lost their lives, and we pay tribute to those who gave their lives so that others might live,” he said. “For many of our citizens, the wounds of that morning remain fresh, firefighters and police officers still choke up at the memory of fallen comrades. Young children and teenagers still long for the parents who will never share the joys of their youth nor guide them to adulthood.”

He also noted more than 2 million have joined the armed forces since the terrorist attacks with more than 50,000 injured and 6,000 deaths in the “defence of freedom.”

Auxiliary President Randa Ortlieb gave a history of 9/11. She likened the experience to that of the assassination of President John F. Kennedy.

“I’m sure everyone here can recall where we were and what we were doing when that first plane, Flight No. 11, out of Boston’s Logan Airport, slammed into the North Tower of the World Trade Center at 8:46 a.m.”

She noted the gathering was to “honor the memory of those lost,” but also to honor the local first responders. Present were representatives of the Lowville, Martinsburg, Glenfield and Beaver Falls fire departments, Lowville Police Department, Lewis County Sheriff’s Department and Lewis County Search and Rescue. Mrs. Ortlieb also recognized the fire departments and ambulance squads from throughout the county which could not be in attendance along with Lewis County Emergency Management team and state police.

“To our brave men and women in uniform who have served and continue to serve to battle the terrorists,” she said. “You all are our heroes as you practice everyday the words of passenger Todd Beamer on Flight No. 93 — Let’s roll!”

A minute of silence was observed at 8:46 a.m., when 19 years ago the terrorist attack began.

The ceremony concluded with the playing of the Alan Jackson song, “Where Were You When the World Stopped Turning.”

After the ceremony, Mrs. Ortlieb said that “every generation has a tragedy which brings you back to basics,” as stated in the Alan Jackson song.

This was the third year the auxiliary has held a Patriot’s Day Ceremony which the auxiliary president said gets bigger each year. She noted next year will be the 20th anniversary of the attack.

“We need to do more of this, and stop knocking the police and fire departments,” said Commander Everson, noting he was proud of those who attended the ceremony and who take pride in the country.