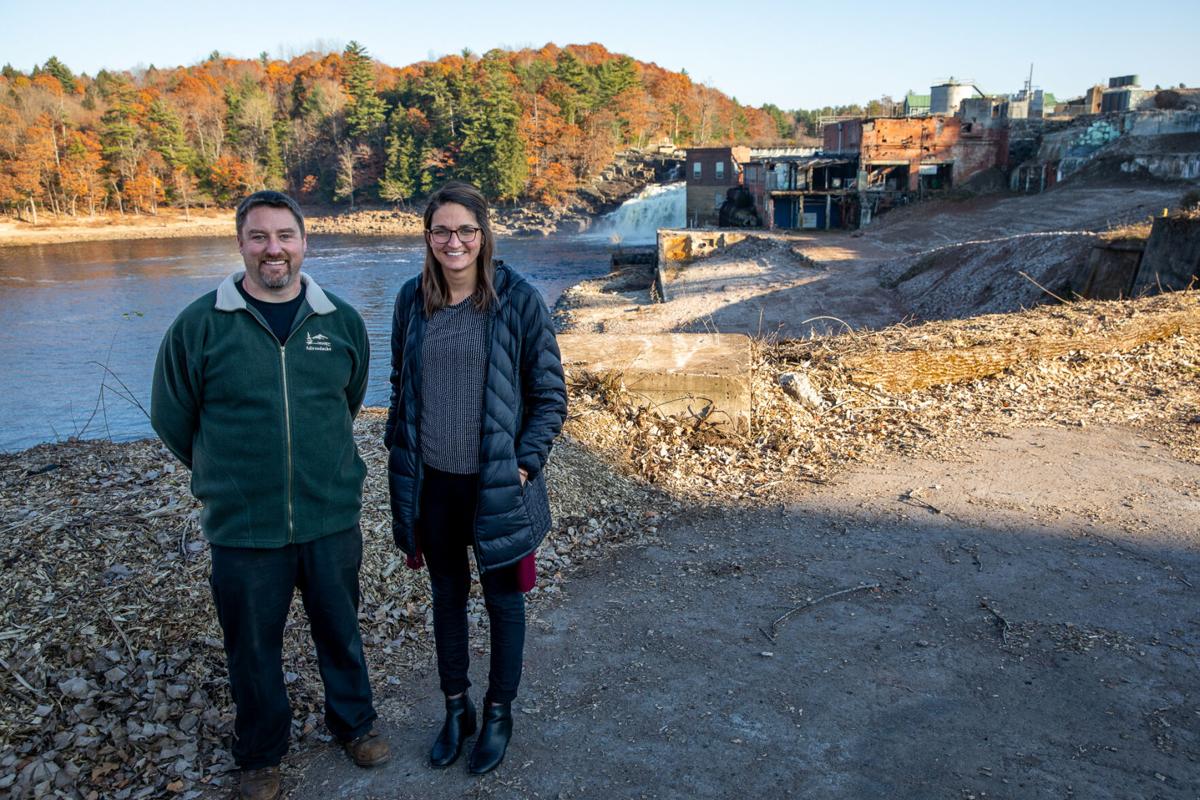 Beau Bailey, mayor of Lyons Falls, left, and Brittany Davis, executive director of Lewis County Economic Development, stand for a photo at the site of what used to be a paper mill and is now ready for development along the Black River on Monday afternoon. Kara Dry/Watertown Daily Times 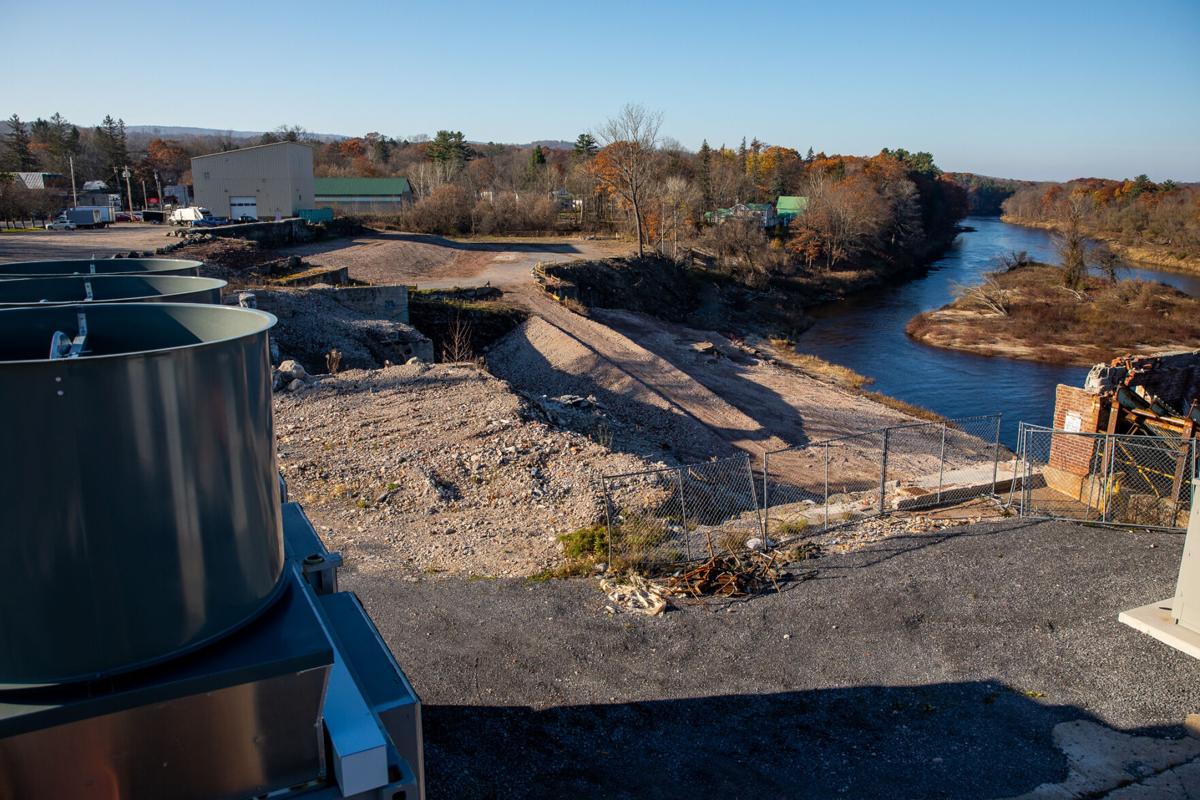 Below Kruger Inc.’s hydroelectric power plant that harnesses the power of Lyons Falls, the site of the former paper mill in the center of the falls’ namesake village along the Black River is cleared, “beautified” and ready to be marketed for development. Kara Dry/Watertown Daily Times 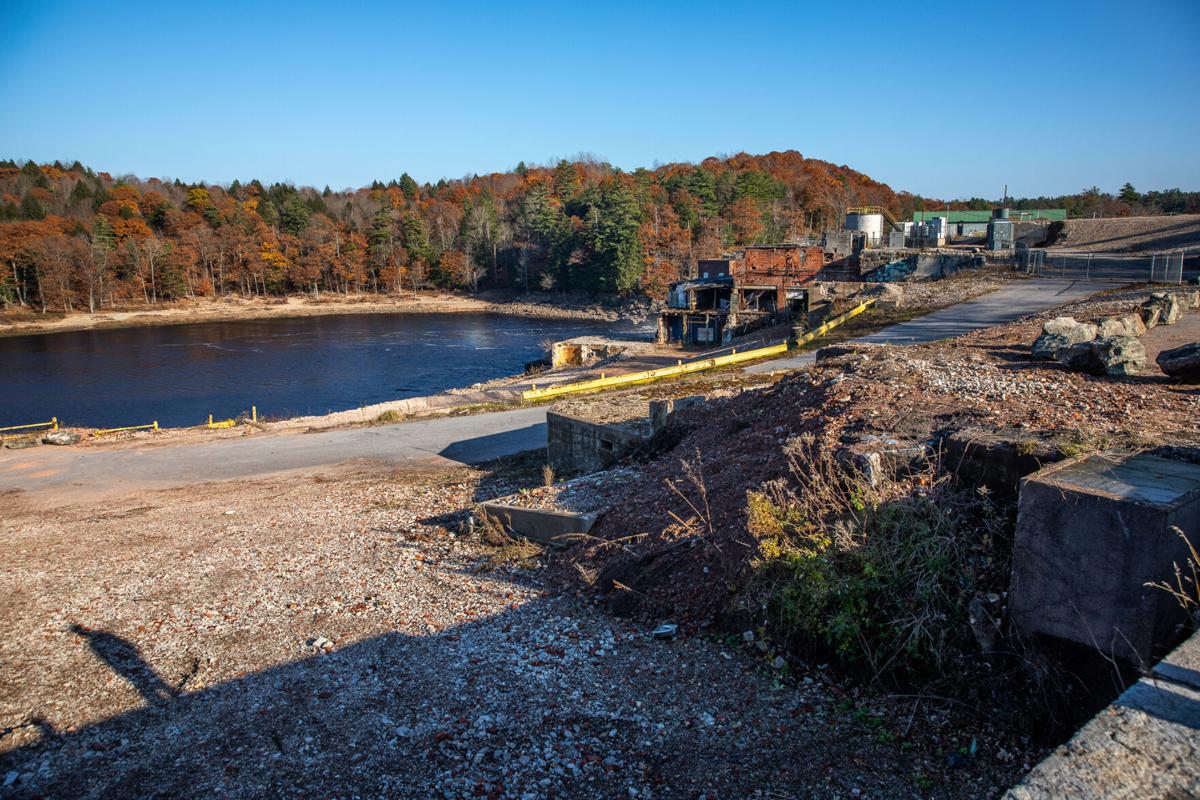 Site of the former paper mill in Lyons Falls along the Black River, now cleared and ready for development. The top tier of the multi-level property will be marketed first. Kara Dry/Watertown Daily Times 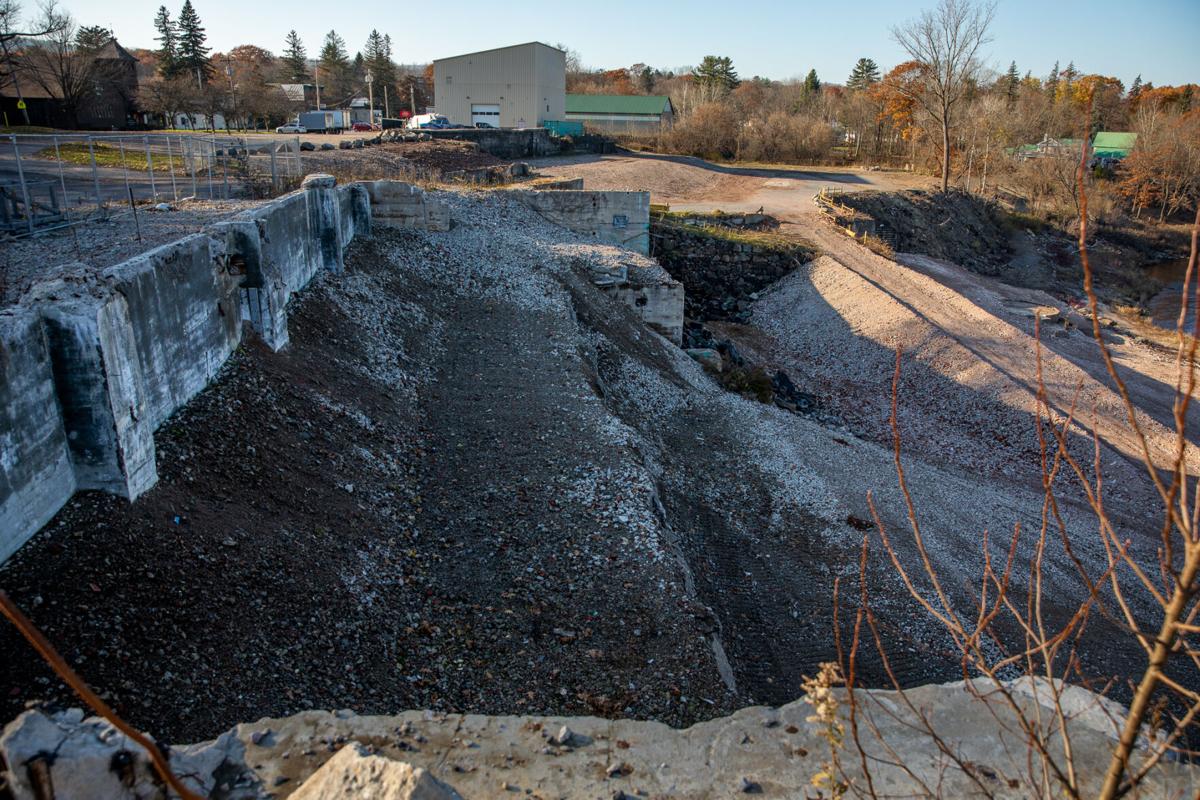 Site of the former paper mill in Lyons Falls along the Black River, now cleared and ready for development. The building in the background is the only mill building that was salvageable and has housed the Black River Valley Creamery for the past three years. The creamery is hoping to expand its operations now that the site is prepped. Kara Dry/Watertown Daily Times 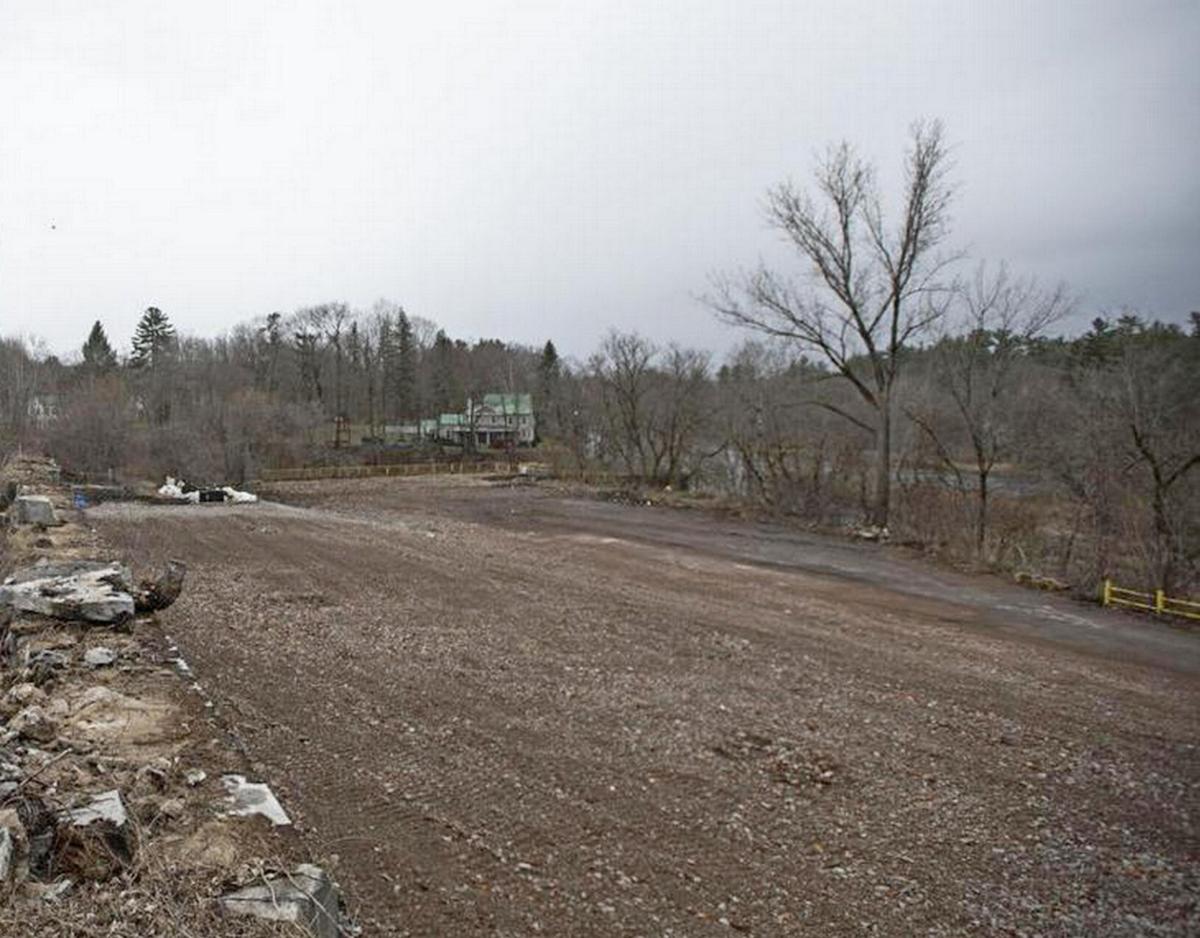 Although the buildings were demolished and the bulk of the rubble removed or buried at the former Lyons Falls paper mill site on Center Street in the village, shown here in early 2020, piles of leftover debris dotted the location and overgrown shrubs and young trees blocked both the view and access to the Black River. Watertown Daily Times 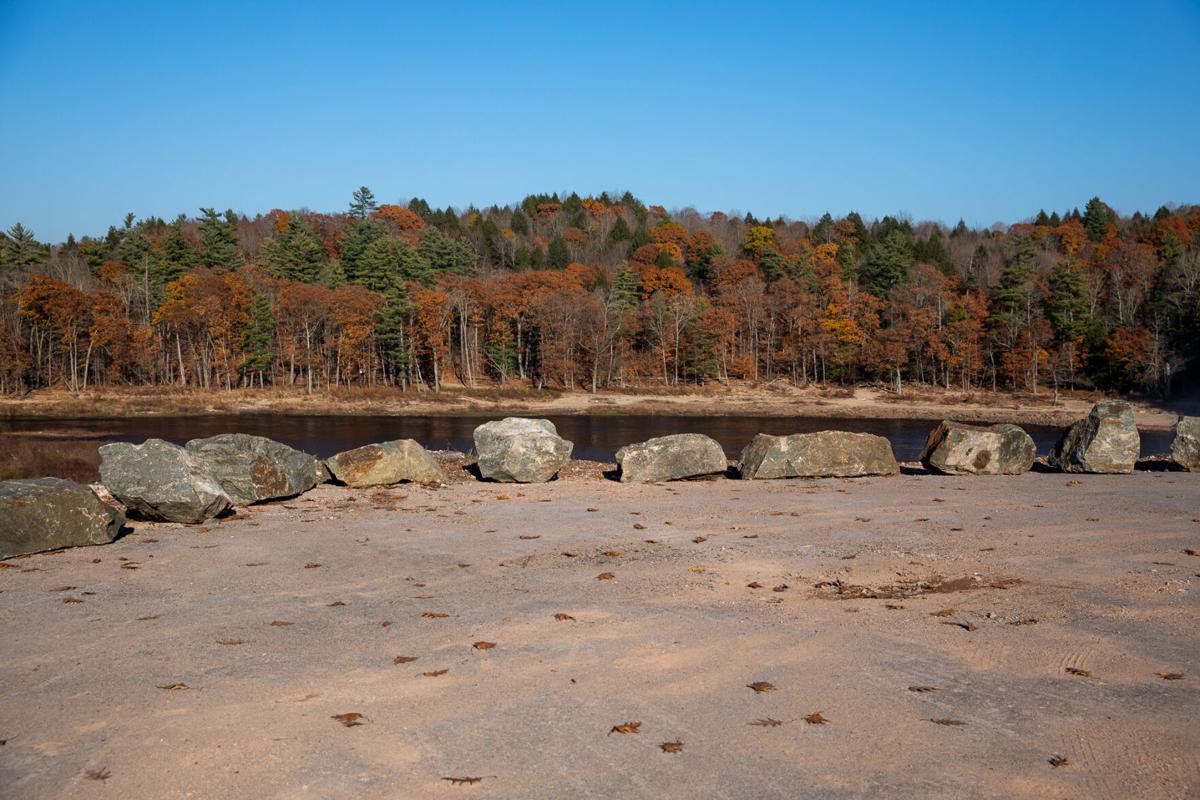 The rocks along the clean edge of one tier of the former paper mill Brownfield Area in Lyons Falls along the Black River mark where a long strip of overgrown brush stood at the beginning of the summer. The site is now cleared and ready to be marketed for development. Kara Dry/Watertown Daily Times 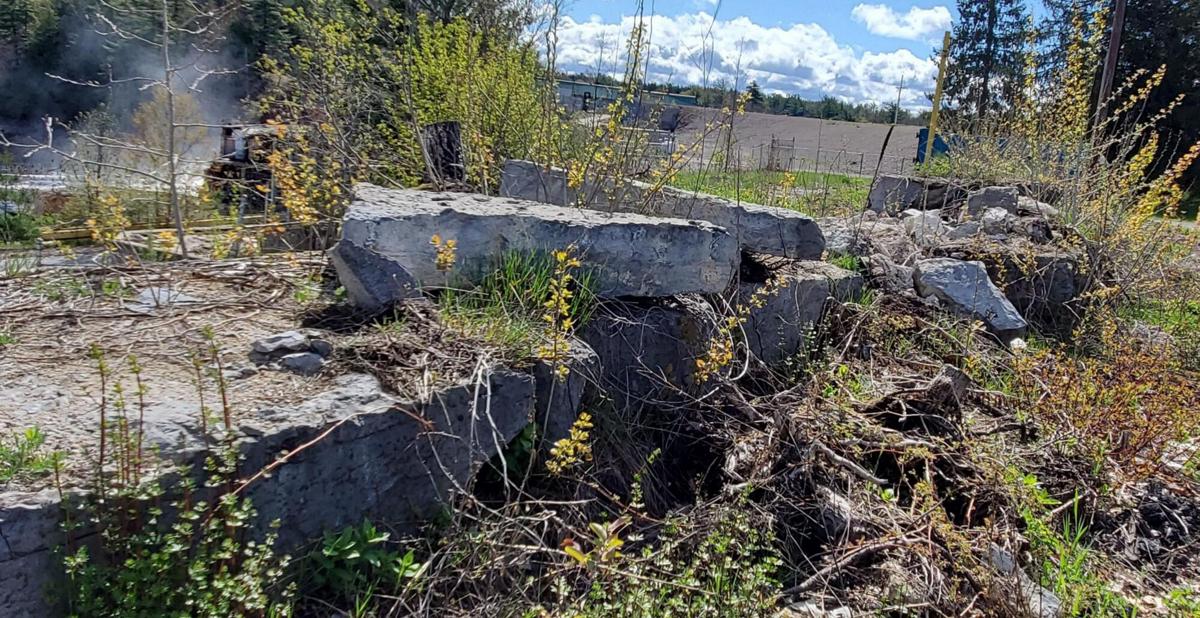 The former Lyons Falls Pulp and Paper Mill site on Center Street in the village was in need of some “beautification” after the larger demolition and cleanup involving the removal of overgrown shrubs and piles of rubble, as pictured, before the site could be marketed to prospective developers. Provided photo 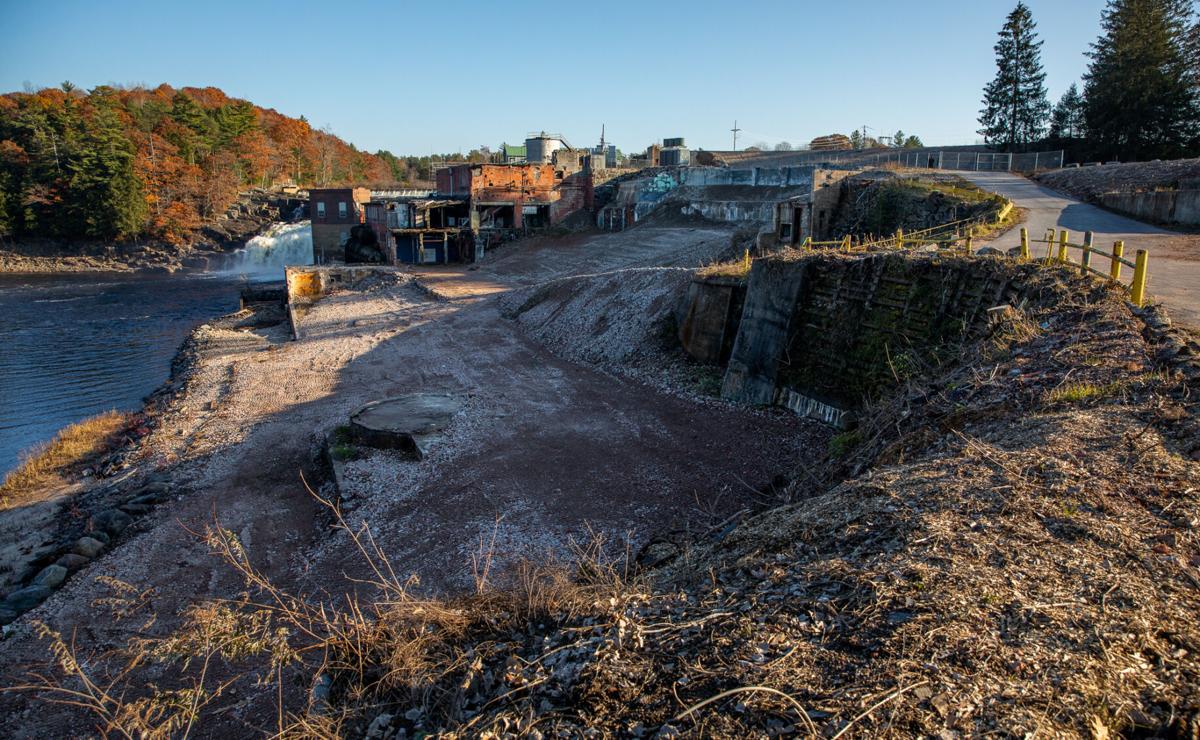 Site of the former paper mill in Lyons Falls along the Black River, now cleared and ready for development on Monday afternoon. Kara Dry/Watertown Daily Times 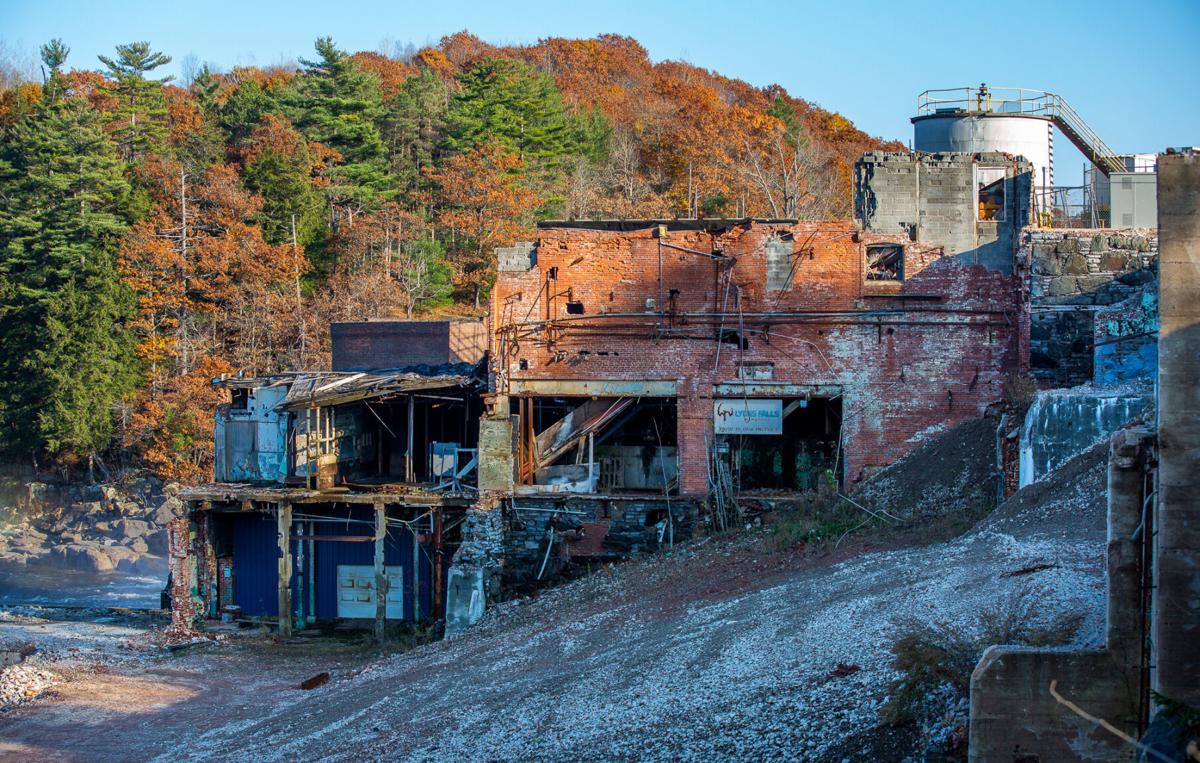 The only remaining brick structure standing at the former paper mill in Lyons Falls is connected to and owned by Kruger Inc.’s hydroelectric plant that harnesses the power of the Black River. Kara Dry/Watertown Daily Times 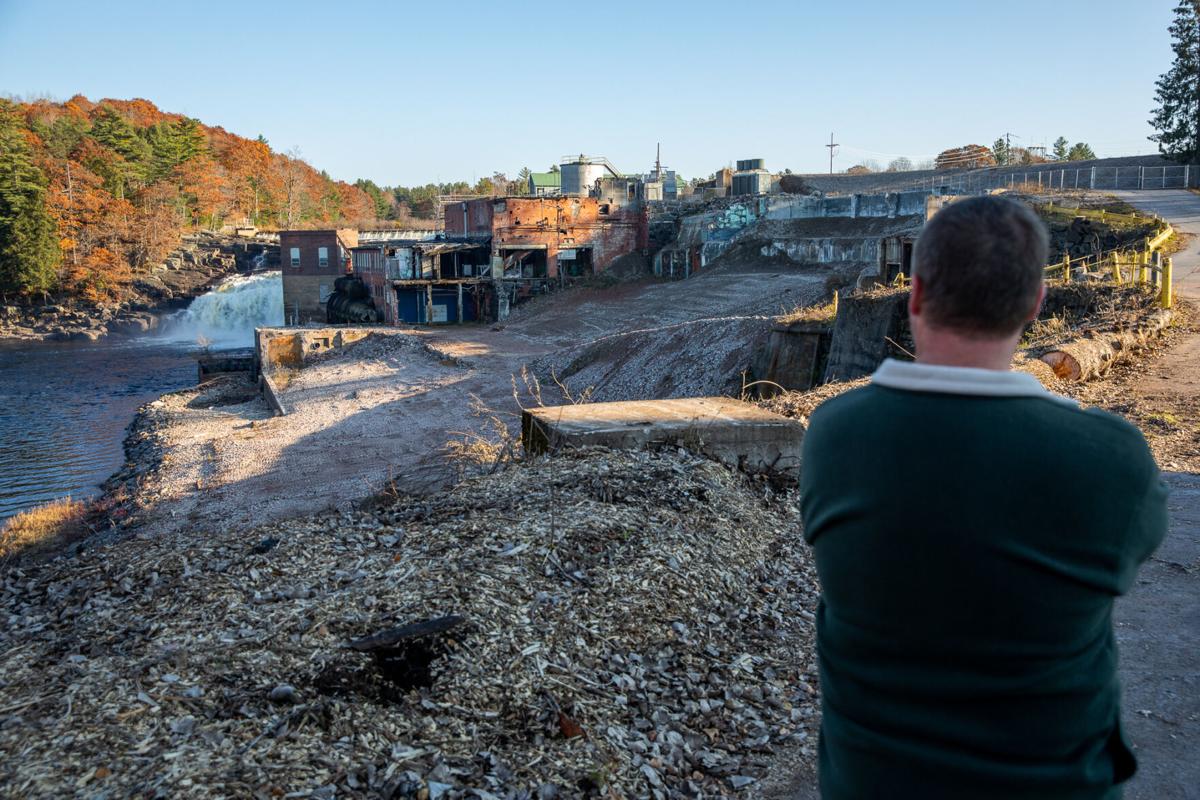 Lyons Falls Mayor Beau Bailey looks at the site of what used to be a paper mill and is now ready for development along the Black River on Monday afternoon. Kara Dry/Watertown Daily Times 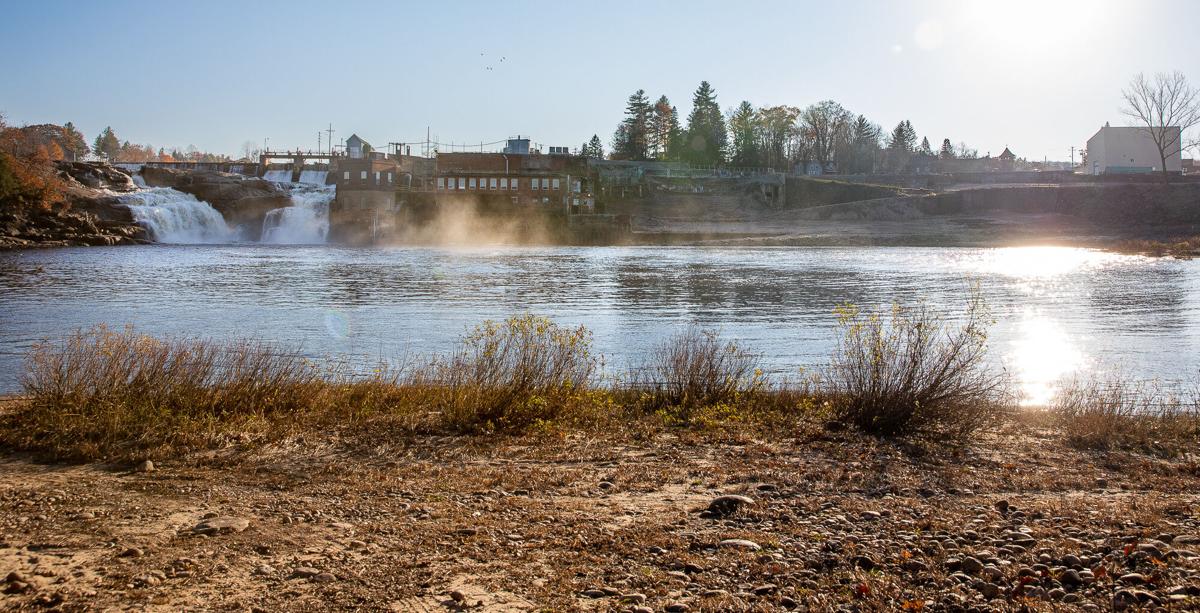 The former Lyons Falls Pulp and Paper Mill seen from across the Black River in the village on Monday afternoon. Kara Dry/Watertown Daily Times

LYONS FALLS — The land just past the confluence of the Black and Moose rivers, at the falls that gave the village its name, is now a “clean slate,” ready for its next chapter.

The former Lyons Falls Pulp and Paper Mill site on Center Street in the heart of the village has been worked over, cleaned up, beautified, and will soon be marketed to prospective developers, but not before the vision for the site is clear, based on community input and what will work best for village residents.

Early last year, the Lyons Falls Mill Committee decided that “beautifying” the site was the first step to prepare it for prospective developers and investors.

As a result, the overgrown shrubs that blocked the view of the river and the original canal wall and the piles of industrial debris left behind by the decade-long cleanup process have all been removed, leaving an expanse of possibilities for the waterfront property.

What remains of the brick mill on one end of the designated Brownfield Area is the ruins of a building abutting the hydroelectric plant owned by Kruger Inc. — a Canadian paper company that has a renewable energy division — the electric plant itself and a small structure next to that plant that mines bitcoin.

The 9.6-acre property was purchased in 2011 by the Lewis County Development Corp., 10 years after the paper mill closed. The development entity also led the work to obtain the financing to make the site usable again, with the intention of turning it into a commerce park.

A number of major grants, including the Brownfield Opportunity Area grant and a contribution from Kruger, paid for the $6 million demolition and broad cleanup of the dangerous collapsing structures, substances and chemicals from the site in a four-phase project completed in 2019.

Lewis County Industrial Development Executive Director Brittany Davis said that Kruger has an option of developing about a half-acre surrounding its facility and hopes the company will take part in the development effort for the larger parcel.

A Kruger spokesperson indicated by email that although the company has considered redeveloping its portion of the site to include a new powerhouse for which some planning is still in process, there is no short-term intention to redevelop the site and not yet a long-term timeline.

While it is not the company’s role to take part in the planning for the larger site, the spokesperson said they “will certainly cooperate with Lewis County Economic Development in their efforts to make the most out of this site.”

On the other end of the property stands the last usable mill structure — a metal building that has housed the Black River Valley Natural Creamery, a small-scale dairy manufacturer, for the past three years. Under the committee’s preliminary plan, support for the creamery will continue as it works on expanding operations.

General committee consensus has been that the site — which has multiple tiers from the river bank up to the road — will be best used by making it a mixed-purpose site.

There is still, however, a number of people in the village who yearn for another large manufacturer to use the space, according to Mrs. Davis and village Mayor Beau Bailey, who are both members of the committee.

They also said the two ideas are not mutually exclusive.

“If a manufacturer comes in, we just stay nimble, we pivot,” Mrs. Davis said. “There are a lot of opportunities in this village.”

“And every opportunity is worth researching and discussing,” Mr. Bailey added. “I still have some things up my sleeve of places in town where I would like to see things happen (if a big manufacturer came to the mill site).”

Committee members agreed that they want the mill site to be a community space.

“I personally would like to see some more retail businesses come back into town and get some foot traffic in here, like it used to be,” Mr. Bailey said. “There used to be a variety of different businesses down here, even when the mill was here. They just slowly over the years folded, closed their doors, moved out of the area or went belly up.”

Mr. Bailey and Mrs. Davis became animated when discussing the types of businesses they would like to see developed on the site in between and around the semi-industrial bookends, flying ideas through the air, each landing on a different flattened tier of the site: a brewery, an adventure outfitter, artisan shops, tourist accommodations.

“I feel like we should do something to capitalize on bringing people in who want to enjoy the vista, who want to be in town and enjoy the town and patronize businesses that are here,” Mr. Bailey said. “Hopefully we can get some more businesses in here to patronize to slowly move in that direction.”

A rainbow shone through the mist at the bottom of the falls, punctuating Mr. Bailey’s gesture to the vista.

Mrs. Davis said marketing for the site will be done through the Saratoga Springs-based development consultant group, Camoin Associates.

She expects the process will start with a committee meeting with Camoin involved to arbitrate different visions for the site and create a cohesive request for interest, for at least the top tier of the property, that will be sent out to prospective developers.

“If we really want to focus on an artisan village and these small businesses that are then going to bring people in to downtown to shop and hang out, you need to have a concept of that. You need to market that to developers who would be willing to build that here for them,” Mrs. Davis said.

There are some incentives to build on the site besides the beautiful location and the motivated community.

Because it is a Brownfield Area, there are tax credits available, and Mrs. Davis said they are exploring the possibility of having power supplied directly from the hydroelectric plant to the new development.

From the Kruger perspective, that possibility would be dependent upon the regulations in place.

What they hope not to do is to rush into the first offer made. Mrs. Davis plans to encourage the committee to take its time and focus on the details to find the best fit for the village — even if it’s not the fastest way to fill the space.

She said they need to be certain to compile all of the characteristics of the ideal development project in the request for interest that Camoin will be sending out.

Although there is no set timeframe, Mrs. Davis said she hopes the next step will be clear by the end of next year, whether it be expansion for the existing business, building a new structure for a new business, a design for green space until other developers can be found, or whatever else comes out of the committee’s process and the request for interest. But she hopes it will be sooner.

Ultimately, she said, “It’s going to take a lot more work, a lot of time and a lot of money” to develop the site, but the committee is very excited to make it happen.

“It’s been a long time coming,” she said.

For more information about the Lyons Falls site, contact Brittany Davis at brittany@naturallylewis.com or call 315-376-3014.