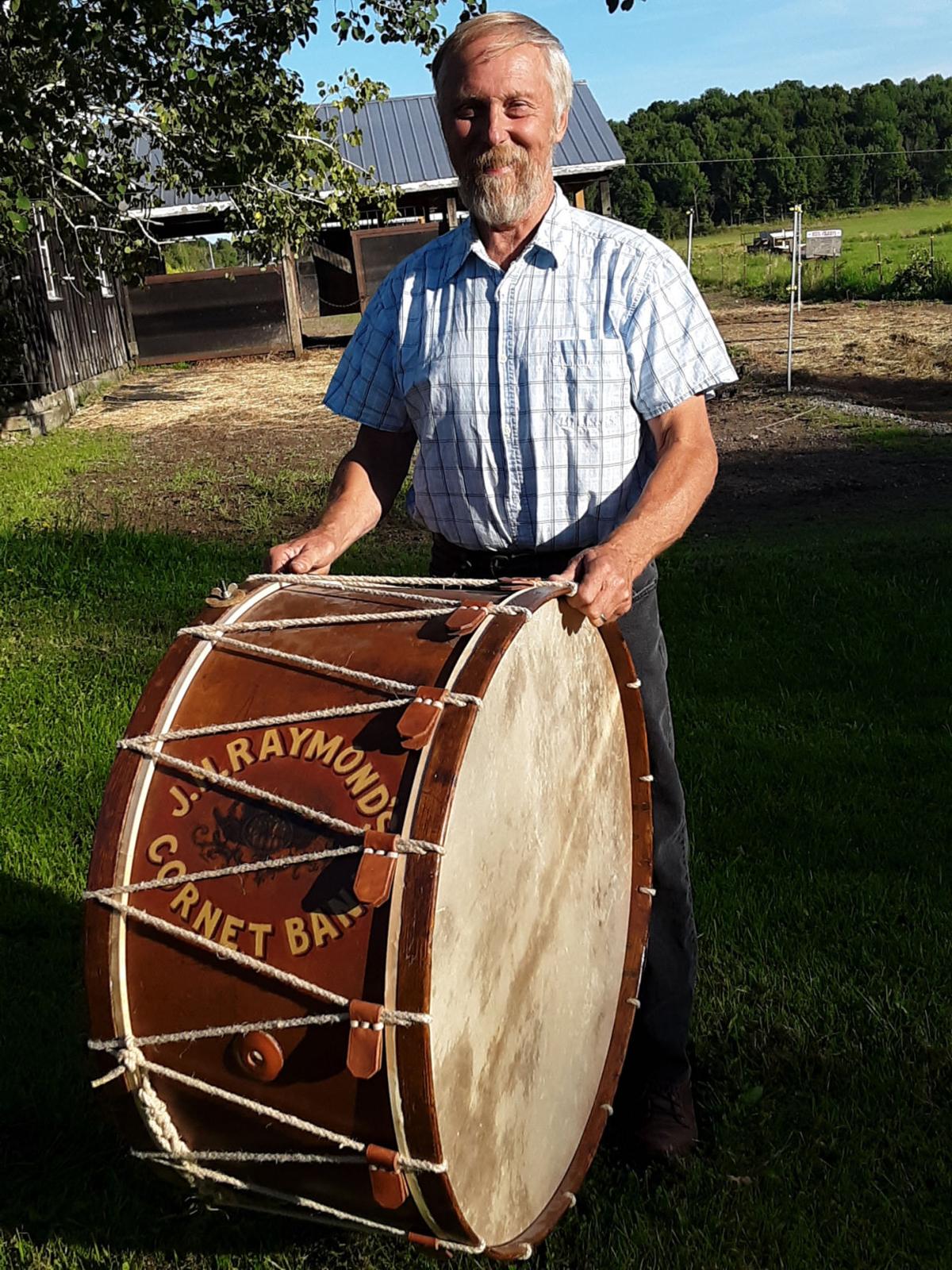 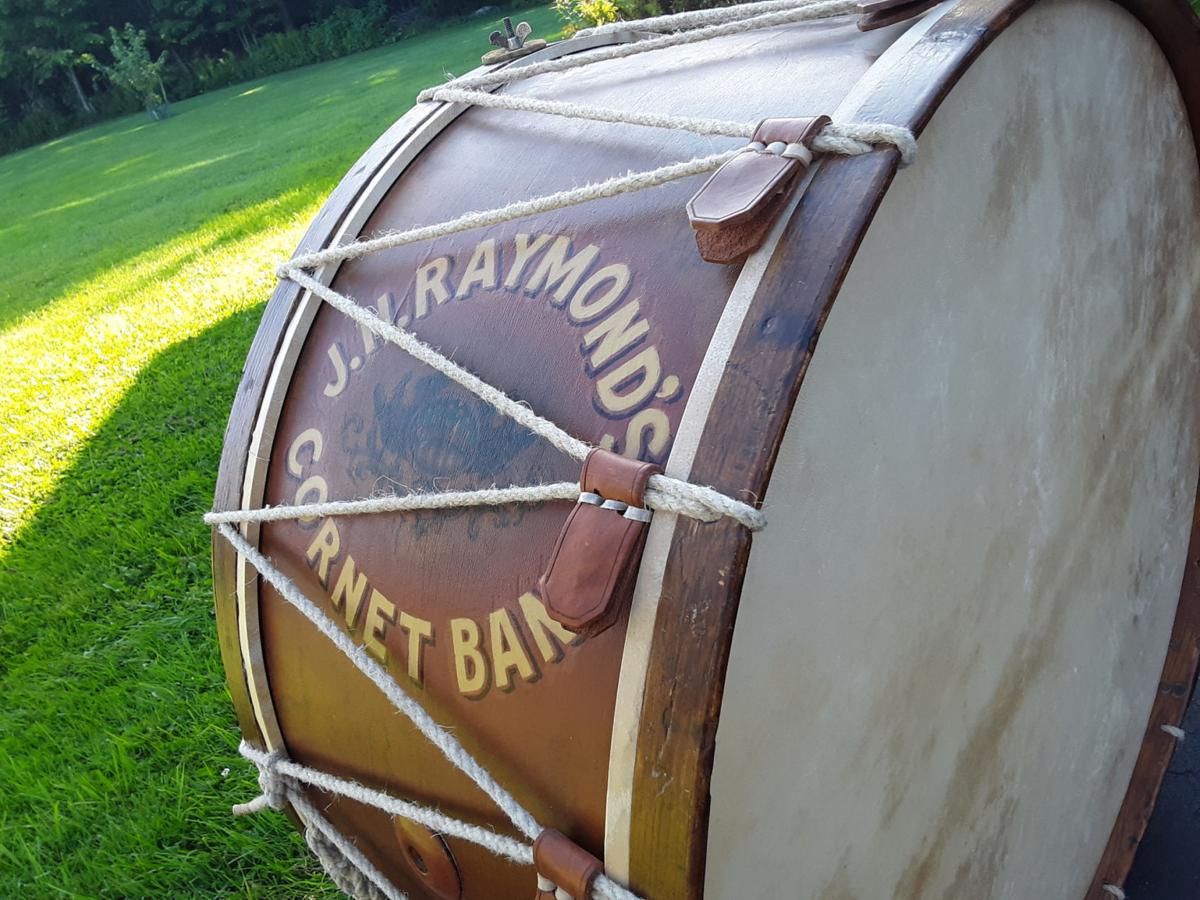 The original bass drum used for 97 years by J.H. Raymond’s Cornet Band in Copenhagen is now in the village to stay, thanks to Eric Totman, who purchased and restored the drum years ago and reunited it with its native village during the 150th Anniversary celebration, and village resident Randy Nicol who found a way to get it purchased for the village. Julie Abbass/Watertown Daily Times

The original bass drum used for 97 years by J.H. Raymond’s Cornet Band in Copenhagen is now in the village to stay, thanks to Eric Totman, who purchased and restored the drum years ago and reunited it with its native village during the 150th Anniversary celebration, and village resident Randy Nicol who found a way to get it purchased for the village. Julie Abbass/Watertown Daily Times

COPENHAGEN — After seeing how perfectly the original bass drum fit in the cradle designed for it in J.H. Raymond’s Cornet Band’s bandwagon and driving the re-enactment band around during the 150th anniversary celebration over the weekend with his show horse team, Copenhagen resident Randy Nicol couldn’t imagine that drum going all the way back to California.

“I just think it ought to stay with the bandwagon. Now that they’re together, they shouldn’t be apart,” Mr. Nicol said.

While on the bandwagon with Eric Totman, the California resident that organized the 1869 re-enactment band and brought the drum and antique cornets that lent so much authenticity, Mr. Nicol discussed the possibility of keeping the drum in Copenhagen.

When Mr. Totman first purchased the drum it was unusable.

He told Mr. Nicol he had spent $3,000 getting it re-headed with new skins and ropes and refurbishing other parts and the frame.

Knowing it would be impossible for the village to organize that kind of money quickly, Mr. Nicol said a donor who prefers to remain anonymous donated $500 toward the drum’s price and “loaned” the remaining $2,500 to prevent the drum from being shipped all the way back to California by Mr. Totman until the funds can be raised locally.

Almost immediately, a like-minded donor that had also been thinking about how to keep the drum in the village contacted Mr. Nicol and donated $500, too.

“I think people will chip in and give it back,” Mr. Nicol said.

Copenhagen resident and Simmons Christmas Tree Farm owner, Shari Simmons, said they would be kicking off a fund drive soon to get the rest to the benevolent donor.

A DVD featuring footage of the three-day event along with historical photographs, post cards and stories has been planned to be sold as part of the drive, Mrs. Simmons said.

“The drum is home to stay,” Mrs. Simmons said, noting that it will be kept at the joint town and village municipal offices in a special case made by Mr. Nicol to protect it and keep it accessible for people.

While Mr. Nicol is the keeper of the bandwagon and leads it with his horses every year in the Christmas parade, pulling the band for the 150th anniversary celebration was an experience on a different level.

“I’ve had horses for 34 years and this was the best thing I’ve ever done with them,” Mr. Nicol said, “It was the history of it, knowing he [band originator J.H. Raymond] was doing the same thing we were in his day. It was just incredible.”

He said the musicians from the Excelsior Re-enactment Band of Syracuse who performed on the bandwagon were amazed because they had never had an experience like this or done a re-enactment with so much authenticity.

For more information about where to make donations, call Village Clerk Sue Parker at 315-688-4229 or go to the municipal offices at 9915 State Route 12.