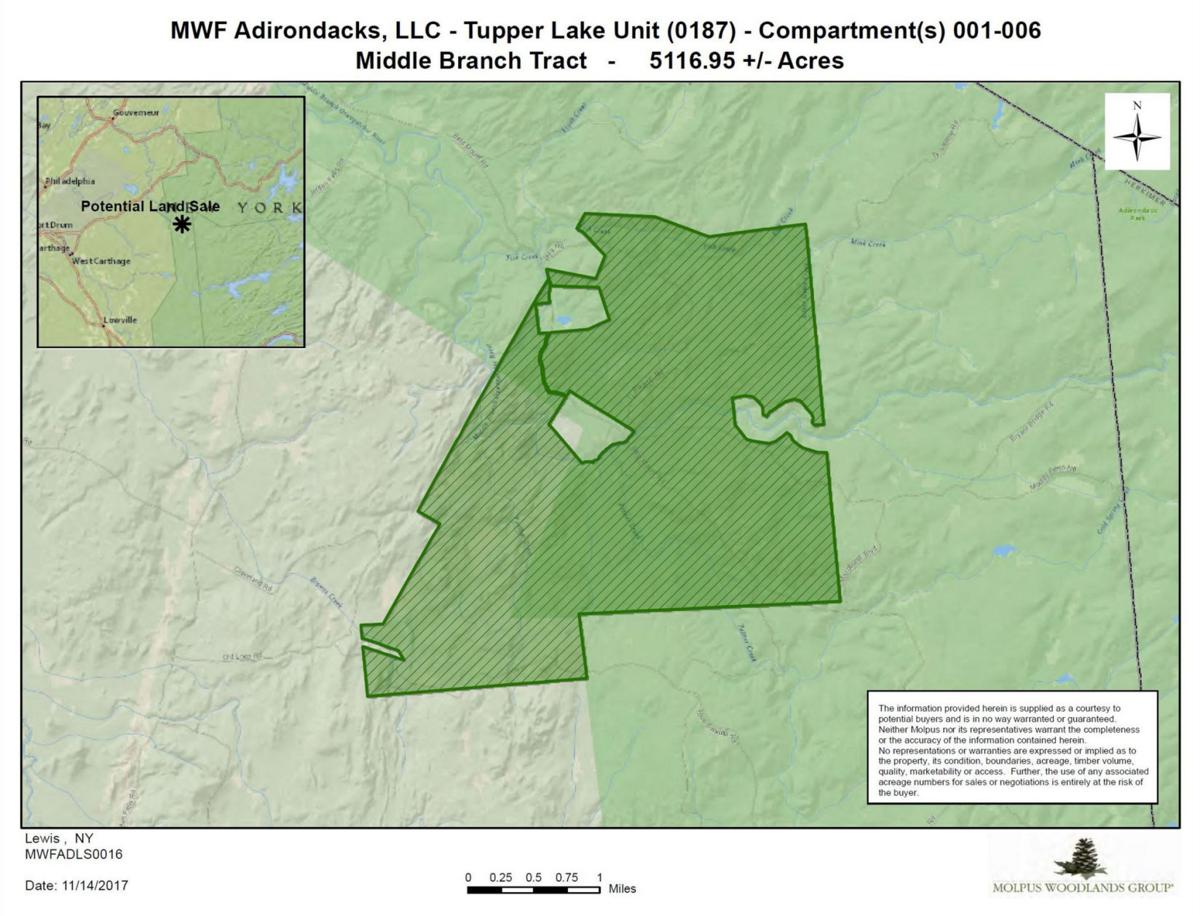 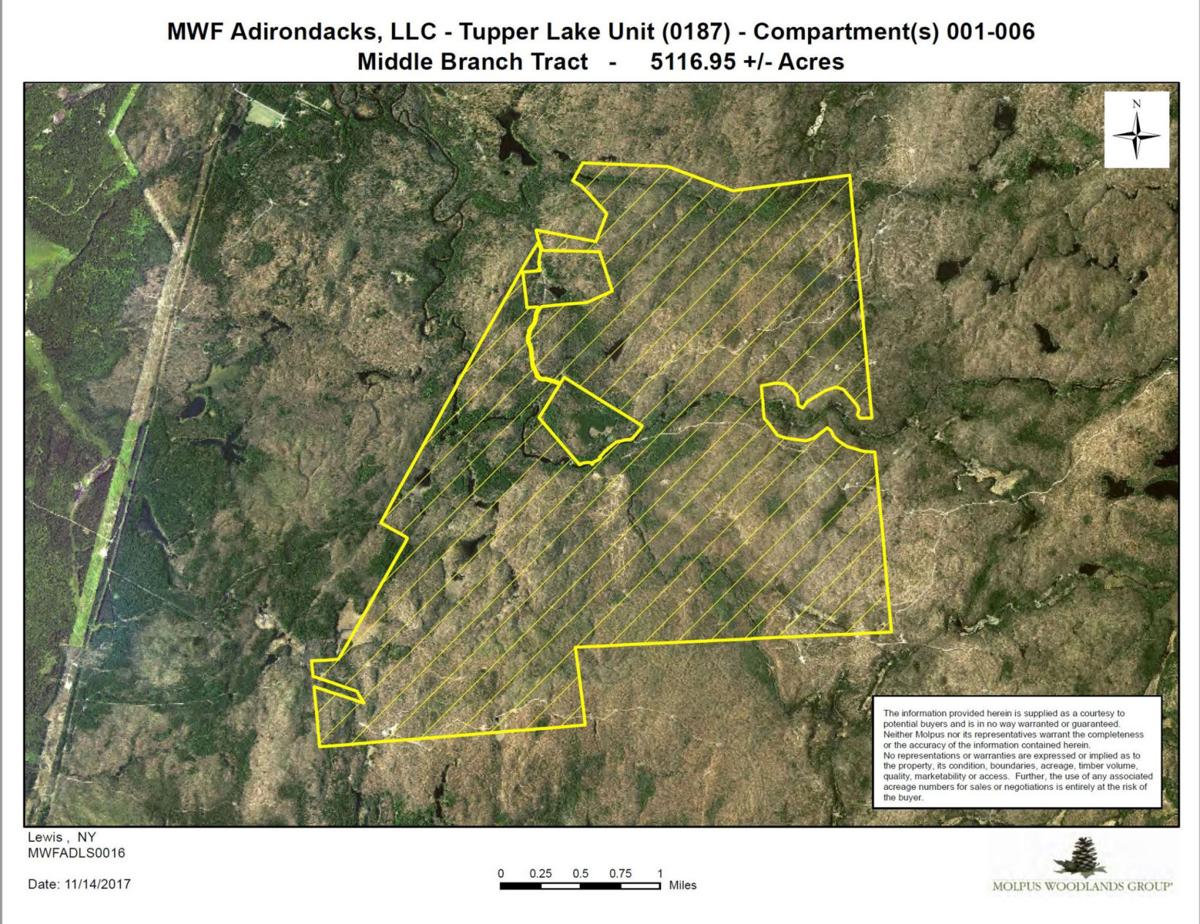 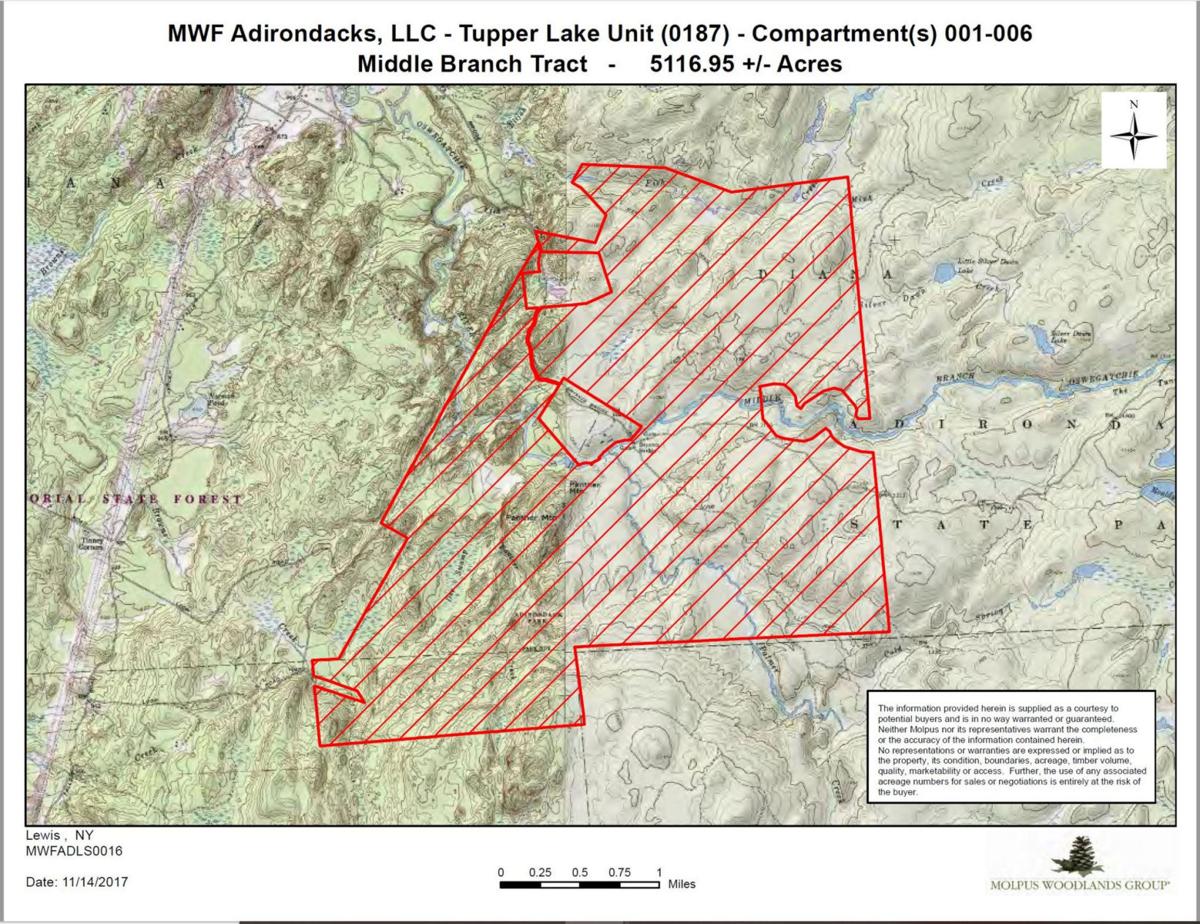 HARRISVILLE — A $2.9 million land deal put 5,117 acres of easement-free land into the hands of a new owner at the end of last year and the recreation trail system has taken a hit.

Atlanta-based Domain Timber Advisors’ subsidiary, Percival Land & Timber LLC, registered in Kentucky, purchased seven parcels in Diana and one in the town of Croghan, referred to as the “middle branch tract,” from MWF Adirondacks LLC, a client of Molpus Woodlands Group.

Landvest also reduced the miles of snowmobile trail agreed upon with Molpus from about nine miles to about five miles.

“If we lose one little bit of what we have left we’ll be done as a club,” said Ron Wolff, trail director for the Long Pond Sno Sled Club that grooms the trails,

Mr. Wolff said the Bald Mountain Road trail is crucial because it connects the Lewis County system to the St. Lawrence County trail system, running the distance from Stillwater to Cranberry Lake, and the Blue Swamp Road trail runs parallel to it where the access has been limited.

Although the DEC has provided detours, Mr. Wolff said all of the trails are “funneling” into the same place now, making that section of trail overused and difficult to maintain. There is also uncertainty as to how long the detours will continue as an option.

Mr. Wolff said Molpus also allowed the club to use a barn on the property to store its grooming machines, which Domain, via Landvest, has discontinued.

“Now I’ve got a rescue sled and a groomer outside, which is fine for now, but we’ve got to figure out what to do after the season’s over,” he said, “We’ve got a lot of moving parts, trying to figure this out.”

While the detours also helped the restaurant, bar and fuel station at the Harrisville Rod and Gun Club on Bryant Ridge Road along the snowmobile trail continue to get customers, trail coordinator Gary Barker said they are concerned about the loss of ATV business.

Mr. Barker said if there is no resolution to the ATV trail issue and no detours, the club will be isolated from both ends of the trail and will lose a significant amount of business.

The outlook for hunting agreements with Landvest and Domain will be addressed in a meeting next week.

Landvest sent a letter to each hunting club that had leases with Molpus, inviting them to each send a representative to the discussion with the landowner.

Mr. Barker belongs to one of the clubs contacted, Silver Dawn II Hunting Club. He said Domain holds the key to half of their hunting ground while the other half is now covered by an easement.

Unlike many other neighboring properties, tracts involved with this purchase do not have a Department of Environmental Conservation easement.

Without that easement, the new owners are free to not just harvest the timber but also to develop it as they wish. The company also has no obligation to allow the public on the land whether it be for hunting, trails or any other public use.

Because Molpus’ other holdings in the area have easements allowing snowmobile and ATV trails, the company entered an agreement with the DEC and the Lewis County Department of Recreation, Parks and Forestry to allow some trails to cross over the land now belonging to Domain, according to the Molpus spokesperson.

The 5,100 acres feature a variety of hardwood trees including sugar maple, red maple, black cherry, yellow birch and American beech, according to the Molpus website, as well as a number of structures, and over half is inside the Adirondack Park’s “blue line.”

While harvesting timber was the primary focus of Molpus’ use of the land, a spokesperson for the company said leases with the hunting clubs on the parcels were also an important piece of the income stream.

The clubs also “help in the maintenance of the road infrastructure and gate system that controls access to each club and pay recurring, annual real property tax expenses,” according to the property’s online sale listing.

The original asking price for the property was $3.25 million, according to Molpus’ website.

The property purchased by Domain was part of the Lassiter Property holdings sold to Rayonier in 2008.

The idea behind the low tax rate per acre is to allow larger holdings to remain intact. With the honor of paying low taxes, it was thought the landowner would share with the community, such as permissive roads and boat launches etc.... Barring this "sharing", my wood lot is currently being taxed at over $2000 an acre, I see no reason to offer the new owner any discount....................tax away Lewis County!

That's about 600 dollars an acre. Pretty good price. Probably wasn't offered to the public at that. I wonder what was really paid out of the eyes of tax authorities. And shouldn't there be a school district out there? I think a school district definitely needs to be gerrymandered to cover that entire area.