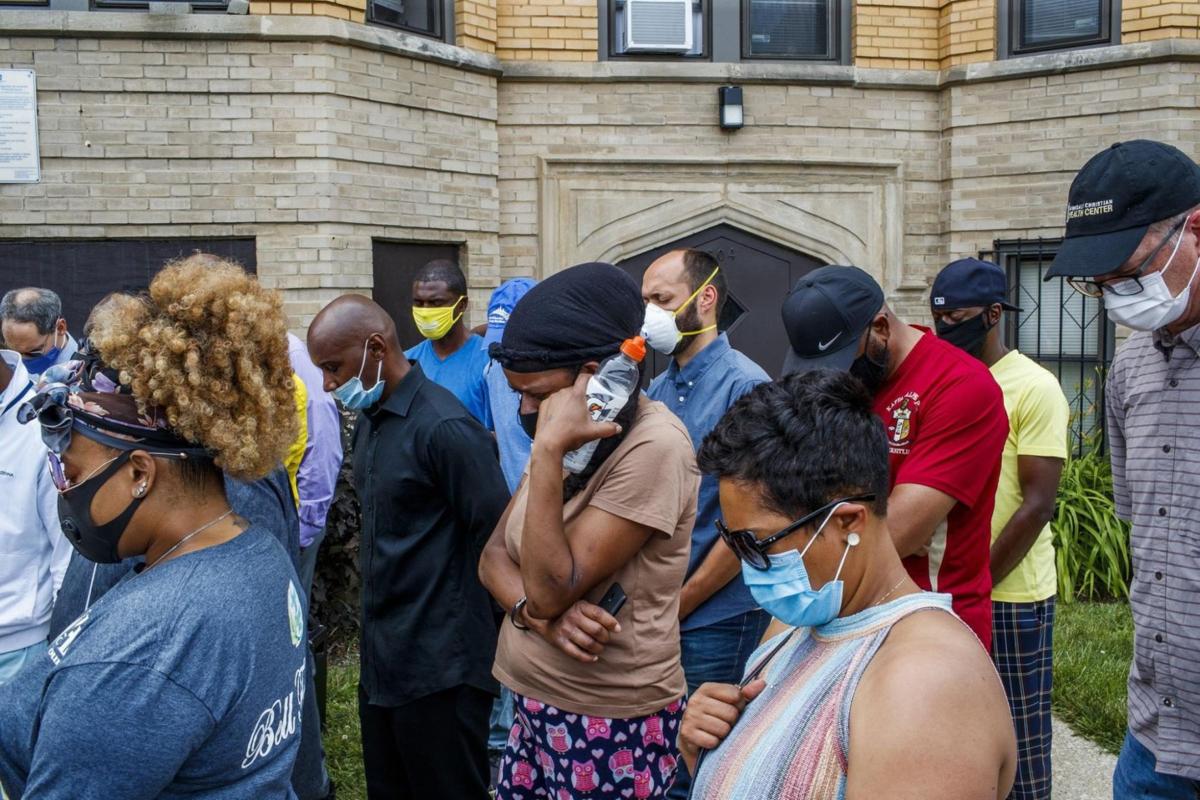 Religious leaders, supporters and members of the community gather on the 600 block of North Central Avenue to denounce the weekend’s overnight violence, including the death of 3-year-old Mekay James who was shot and killed the previous day on the same block Sunday June 21, 2020 in Chicago.(Armando L. Sanchez/Chicago Tribune/TNS) 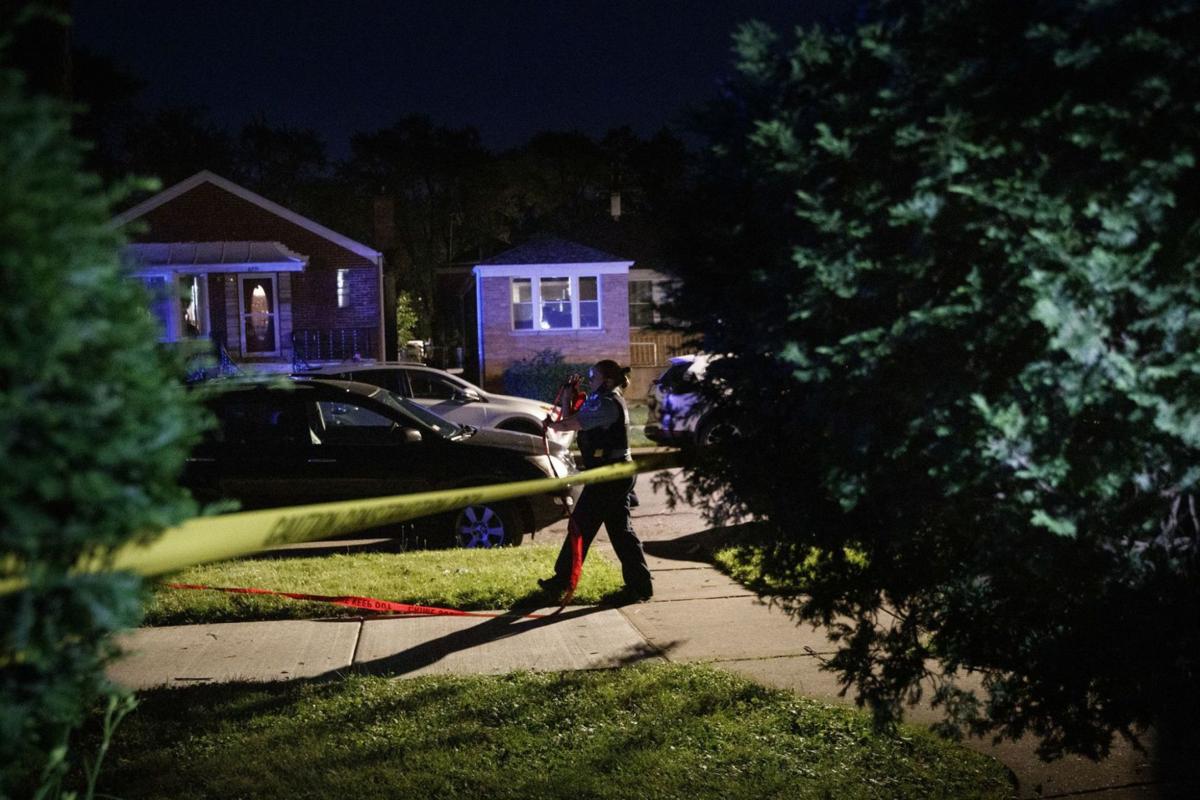 Police work at the scene where a person was fatally shot June 21, 2020, in the 6200 block of North Troy Street in the West Rogers Park neighborhood in Chicago. (Armando L. Sanchez/Chicago Tribune/TNS)

Religious leaders, supporters and members of the community gather on the 600 block of North Central Avenue to denounce the weekend’s overnight violence, including the death of 3-year-old Mekay James who was shot and killed the previous day on the same block Sunday June 21, 2020 in Chicago.(Armando L. Sanchez/Chicago Tribune/TNS)

Police work at the scene where a person was fatally shot June 21, 2020, in the 6200 block of North Troy Street in the West Rogers Park neighborhood in Chicago. (Armando L. Sanchez/Chicago Tribune/TNS)

CHICAGO — At least 106 people were shot in Chicago, 13 of them fatally, from mid afternoon Friday through early Monday, according to city officials and Chicago Tribune data.

It is the most people shot in one weekend since at least 2012 but not the deadliest this year, after more than 20 were killed over the last weekend in May, according to data compiled by the Tribune. Twelve of those shot this past weekend were younger than 18 years old. Five of those children died.

Six shootings involved three or more victims. One drive-by shooting early Monday in the East Garfield Park neighborhood injured five, including a 16-year-old girl who was left in critical condition.

The Austin District, where 3-year-old Mekhi James was fatally shot Saturday afternoon, had the most shooting victims: 18.

Monday afternoon, a somber Chicago police Superintendent David Brown said there are too many violent felons on the streets and made vague accusations about a failed electronic monitoring system to explain the exceptionally violent weekend.

Brown, in one of his first news conferences in the wake of a violent Chicago weekend, spoke of the devastation.

“On the heels of Father’s Day, I come to you again with obviously a high level of frustration and disappointment,” Brown said.

He offered no specifics on why violent felons remaining on the street too long were to blame for the weekend’s carnage. He also called for improvements in Cook County’s electronic monitoring program, in which defendants are released from jail to await trial on home confinement.

“There are too many violent offenders not in jail, or on electronic monitoring, which no one is really monitoring,” Brown said. “We need violent felons to stay in jail longer and we need improvements to the home monitoring system. We also must collaborate with our criminal justice partners to create a safer Chicago.”

As for what caused the violence, Brown offered few specifics on the conflicts that led to shootings.

Mayor Lori Lightfoot expressed support Monday for Brown, saying she has no plans to seek to replace him.

“I can’t even believe someone would ask the question,” Lightfoot said. “Superintendent Brown has been here for eight weeks. He’s a tremendous leader. He has walked into a very difficult circumstance.”

Regarding Brown’s public goal when he arrived to keep Chicago’s homicides for the year under 300, Lightfoot said the superintendent wanted to make it a commonly shared goal to drive down violent crime.

“I think what the superintendent said when he had this ambitious goal of 300, he called it a moonshot,” Lightfoot said. “And the idea was, not so much the number, but making sure that we rallied all the resources, both within the Police Department, but also with our various partners, to really focus on what each of us could to do more around public safety.”

The mayor defended the performance of police officers, saying they are facing an even tougher situation than usual because federal agencies aren’t doing their usual part to fight crime locally during the pandemic. And county officials are trying to keep the head count low at Cook County Jail to stop the spread of the virus there, meaning more people getting sent back out onto the street after arrests, Lightfoot said.

“Public safety in Chicago, like in most big cities, is a big ecosystem,” Lightfoot said. “There’s lots of different inputs and partners. And the challenge that we have faced is, while the Chicago Police Department has been out there, many other parts of that system have not been up to full complement.”

Lightfoot said she would convene a meeting with representatives of the Cook County state’s attorney’s office and the Cook County criminal court system this week “to talk about things each of us can do to step up to stem the violence that we saw this weekend.”

The northernmost shooting over the weekend, which left a man dead, took place about 6:20 p.m. Sunday in the 6200 block of North Troy Street in the West Rogers Park neighborhood, according to police.

Gary Tinder, 20, was walking north on Troy when someone approached him from behind and fired shots, police said.

Tinder was shot in the stomach and taken to Amita St. Francis Hospital in Evanston, where he was pronounced dead at 8:12 p.m., according to the Cook County medical examiner’s office.

“I can’t believe I was the last person to see that boy smile,” said a neighbor, who asked not to be named.

The neighbor was watering plants outside his home when he saw Tinder and gave him a friendly nod and smile. Afterward, he heard the shots.

Another neighbor, who asked to be identified only by his first name Izzy, said he has lived for six years in the neighborhood, which has a large Jewish population. He had never known of a shooting on his block before.

He was on the phone inside when the shooting took place. When he came outside, he saw Tinder on the sidewalk and another man tending to him and calling 911. Tinder’s skin looked pale, Izzy said.

After police cleared the scene outside Izzy’s house, he looked at the pool of blood on the sidewalk. He explained how in the Jewish religion, when someone is killed, the blood would have to be cleaned up and the rags used to clean it would have to be buried with the man. But he didn’t know if the man killed was Jewish and said he had not seen him before.

Izzy pointed to a mezuza on the outside of his home and said he wasn’t concerned for his safety in the neighborhood. His young daughter, who was riding her bike outside moments before the shooting, also shook her head “no” when asked if she was scared.

“I’m sure the almighty God will keep protecting us,” he said.

In other killings overnight in Chicago:

— Just after midnight early Monday, a 15-year-old boy was shot to death and another teen wounded in an attack in the Austin neighborhood, according to a police media notification. The two teens were walking in an alley near the 4700 block of West Superior Street when they were struck by bullets fired from what police said may have been gray sedan. The 15-year-old suffered gunshot wounds to the leg, chest and abdomen. He was taken to Stroger Hospital, where he was pronounced dead. The other teen, a 16-year-old, was shot in the ankle and taken to Stroger in fair condition. No one was in custody, according to police.

— In West Garfield Park about 4:30 a.m., a 41-year-old man was shot in the face by a man on the street in the 3800 block of West Harrison Street. The man was taken to Stroger Hospital in critical condition and pronounced dead about 5:30 a.m. A possible suspect was taken into custody for questioning after witnesses near the scene identified the person, police said in a media notification.

— A 30-year-old man was walking in the 100 block of South Washtenaw Avenue in the East Garfield Park neighborhood. when someone shots from the alley about 4:20 a.m., according to police. The man suffered a gunshot wound to the neck and was taken to Stroger Hospital, where he was pronounced dead. No one was in custody.