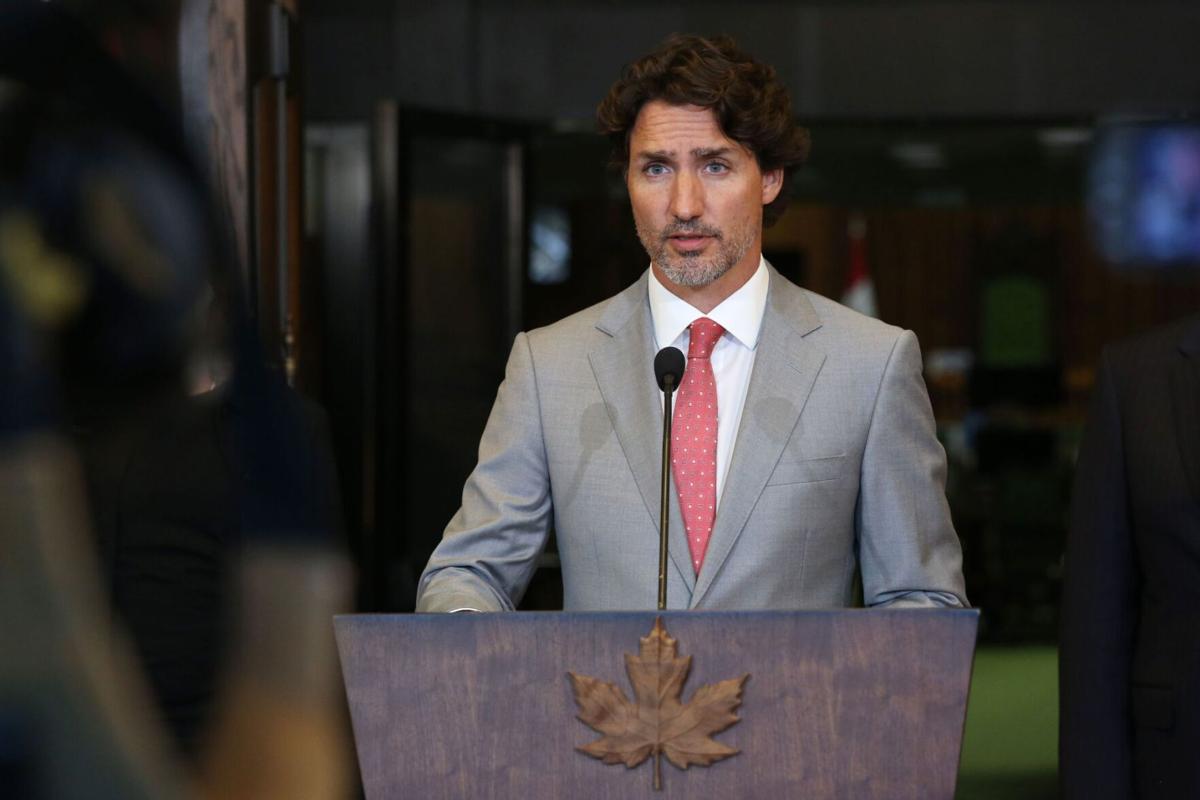 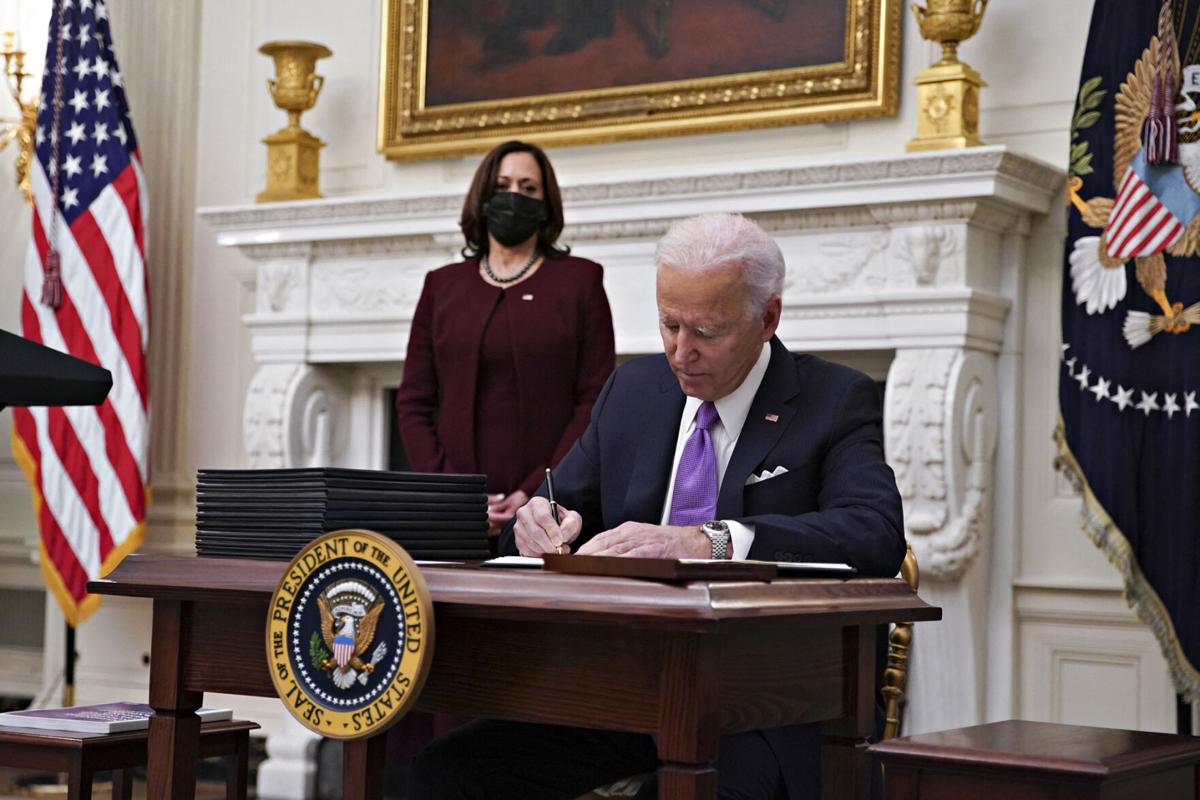 President Joe Biden signs an executive order last week after speaking during an event on his administration’s COVID-19 response with Vice President Kamala Harris, left, in the State Dining Room of the White House in Washington, D.C. Al Drago/Pool/Abaca Press/TNS 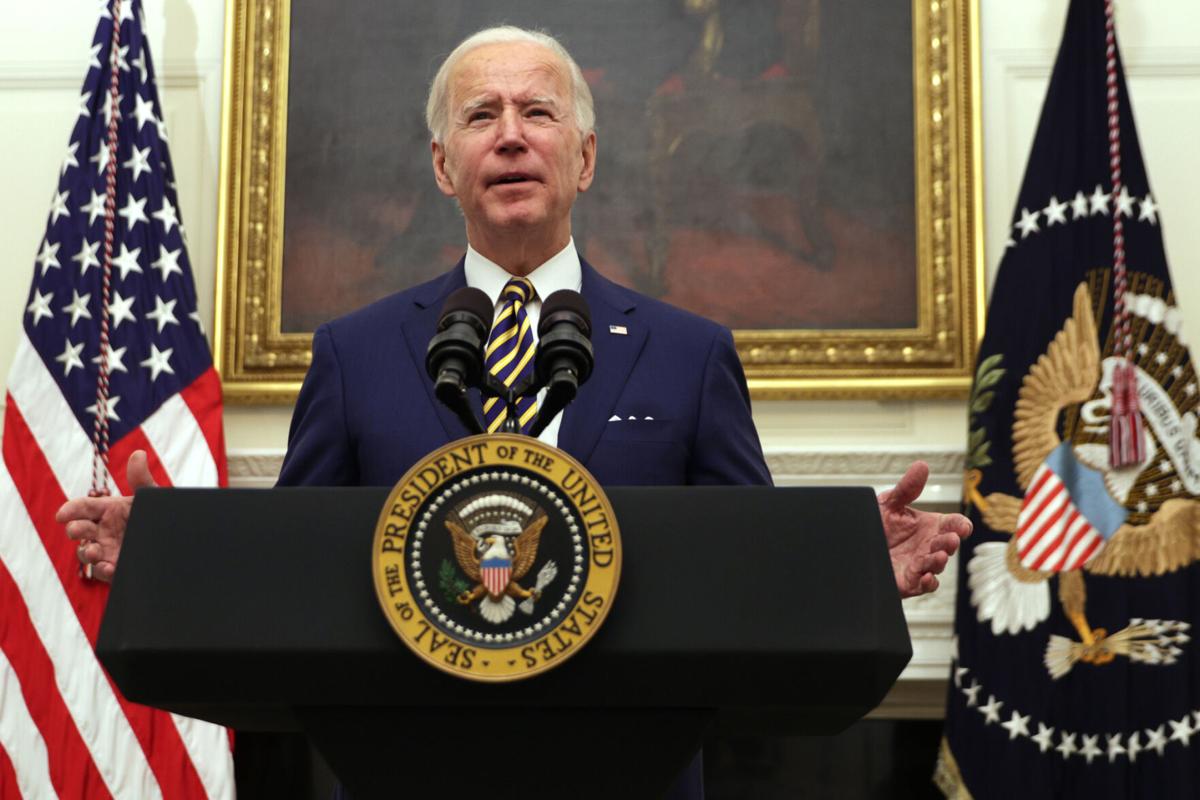 President Joe Biden speaks during an event on economic crisis in the State Dining Room of the White House on Friday. President Biden spoke on his administration’s response to the economic crisis caused by the COVID-19 pandemic and signed two executive orders. Alex Wong/Getty Images/TNS

President Joe Biden signs an executive order last week after speaking during an event on his administration’s COVID-19 response with Vice President Kamala Harris, left, in the State Dining Room of the White House in Washington, D.C. Al Drago/Pool/Abaca Press/TNS

President Joe Biden speaks during an event on economic crisis in the State Dining Room of the White House on Friday. President Biden spoke on his administration’s response to the economic crisis caused by the COVID-19 pandemic and signed two executive orders. Alex Wong/Getty Images/TNS

Noting that the two leaders would likely return to a “more traditional tone,” the North Country Chamber of Commerce president believed disagreements were inevitable, but said they would hopefully be “resolved by agreed channels for resolution, versus responses such as tariffs, which only hurt ourselves given how integrated our two economies are.”

The call was Biden’s first with a foreign leader since taking office earlier this week.

“With every new president, we hope that their first international outreach will be to the Prime Minister of Canada, recognizing our unique and extraordinary connections, economically, socially and as allies,” Douglas said. “We are therefore very pleased this contact is first on President Biden’s list.”

The office of Congresswoman Elise Stefanik, R-Schuylerville, issued a similar sentiment, saying Biden’s talk with the Canadian leader indicated “the special relationship between the United States and Canada that our communities in the North Country know well.”

It was theorized that Biden and Trudeau would discuss the now expired Keystone XL cross-border pipeline expansion project, which Biden squashed with an executive order this week.

Many Canadians and Americans voiced upset with the move, citing lost jobs and opportunity, while others praised it, believing it the right choice environmentally.

At a Friday news conference outside his Rideau Cottage residence, Prime Minister Trudeau urged his nation to look past the project’s cancellation, The Canadian Press reported Friday.

“It’s not always going to be perfect alignment with the United States,” he said. “That’s the case with any given president

“In a situation where we are much more aligned — on values, on focus, on the work that needs to be done to give opportunities for everyone while we build a better future,” he added. “I’m very much looking forward to working with President Biden.”

In her Friday morning statement, Stefanik referenced continued restrictions on Can-Am border crossings, which have blocked nonessential travel between the neighboring nations since last March. The congresswoman urged Biden to discuss the border’s safe reopening with Trudeau.

Restrictions were most recently extended until at least Feb. 21.

The Wilson Center, a Washington, D.C.-based non-partisan policy think tank, announced last month the formation of a bi-national task force that, over the next few months, will develop recommendations for eventually reopening the world’s longest international land boundary to nonessential travel.

The Wilson Task Force on Public Health and the U.S.-Canadian Border was expected to present recommendations for lifting the border restrictions come March.

“As co-chair of the Northern Border Caucus and Representative of New York’s 21st Congressional District, I understand firsthand that bilateral collaboration between the United States and Canada is absolutely critical, especially as we work together to protect public health, safely restart our economy, and defeat the COVID-19 crisis,” Stefanik’s statement reads.

“As we approach one year of border restrictions for non-essential travel, I strongly urge President Biden to commit to a metrics based bilateral plan to safely reopen the U.S.-Canada border as soon as possible.”

The appointment of a new ambassador was likely one of the next steps in the Can-Am arena, Douglas said.

“Traditionally, U.S. Ambassadors to Canada have usually been figures who are personally close to the president, providing a strong channel between the two countries,” he said. “Hopefully, this will be the case once again.”

Lies have consequences. One is that they compromise what a liar can contribute to diplomacy. Stefanik can chirp, but Trudeau and Biden have encountered, more than once, political liars. The chirps of political liars are treated by politicians of integrity as background noise.

Joe is deleting the light stuff from Trump's executive orders. He will get some noise when he raises corporate taxes. He's building roads for the RNC.

it is hilarious watching all these conservatives pretend to be deeply upset about keystone. the right-wing media machine has really gotten them to fall into line.

Come on man, “traditional tone”. That’s why Biden shutdown Keystone? The Canadians have invested over a billion $ in this pipeline based on assurances from our gov't. Earlier they had an alternate plan to build a pipeline West to a port in Canada where it would be easier to ship it to CHINA. Their oil is heavy crude, our refineries in the the Gulf states refine heavy crude, if they can't get it from Canada, the only other source is Venezuela. Boggles the mind that biden would do this to our neighbors to the North to possibly help out two communist countries while putting 11,000 American out of work.

Holmes... fact check...Albert News today.. "David Braziel, CEO of RBN Energy, an energy markets consultancy based in Houston, Texas, said that when the Keystone XL project was first announced, back in 2005, the U.S. was certainly in need of the additional capacity that would have been produced. But as the project continued to stall, the industry found alternative supply chains. Producers began relying more on rail to transport oil supplies while other pipelines expanded incrementally to help move those additional barrels to U.S. markets, Braziel said." Long article...nowhere was China mentioned... Sounds like a Fox spin..

Biden is asking Trudeau how we can join communism.

Biden cancelled the Keystone XL. The oil will now be burned in China long tanker trips fueled by oil. We will have to increase our oil purchases from the Middle East, which will arrive in Houston after long tanker trips fueled by oil. We'll have to fight over that oil at some point, burning more oil. Damage to the environment and our national security has just gotten worse but Joe made a special interest group happy. Lets hear if the liberals in NNY have anything to say about this. Maybe though, they can only juggle the Elise Stefanik ball.

we have been rapidly ramping up renewals and canceling keystone is just as likely to push us further in that direction.

Did you read my post? It doesn't seem that you did. What good does handing China the keys to the Canadian oil fields do for the environment, hermit? It makes things much worse. The old saying is, "The road road to H*** is paved with good intentions." Joe Biden, Kamm Harris, or Chuck and Nancy will never ride around in a limo powered by electricity. The technology does not exist yet to have that heavy a vehicle have the performance needed to protect a government leader. Your pipe dreams won't solve the CO2 problem. The great irony is that liberals are making climate change worse. They're also killing jobs and harming national security. What a weird situation.

i read your post and i read this one and both are delusional.

Oil will be burned, but that doesn't mean it has to be piped through the USA. In fact, why doesn't Canada have refineries in Vancouver? Or Alberta itself for that matter. It would constitute vertical integration. Not in my back yard, that's why. Well not in our back yard either.

NIMBY = selfish. Hero of the Dems, Teddy Kennedy, helped defeat the wind project off the coast of Marthas Vineyard years ago. Boy, that was helpful.

Cancelling the Keystone pipeline contract is a great way to start. Driving gas prices up for everyone. Disproportionately affecting low income people. This is just the beginning.

Not we, it’s Biden’s mishandling of the problem

He works incredibly quickly. It's amazing what evil can do.

Good catch, Holmes. Amazing how all bad thing came from Trump for 5 years. Now its turned into "we" (not Biden).