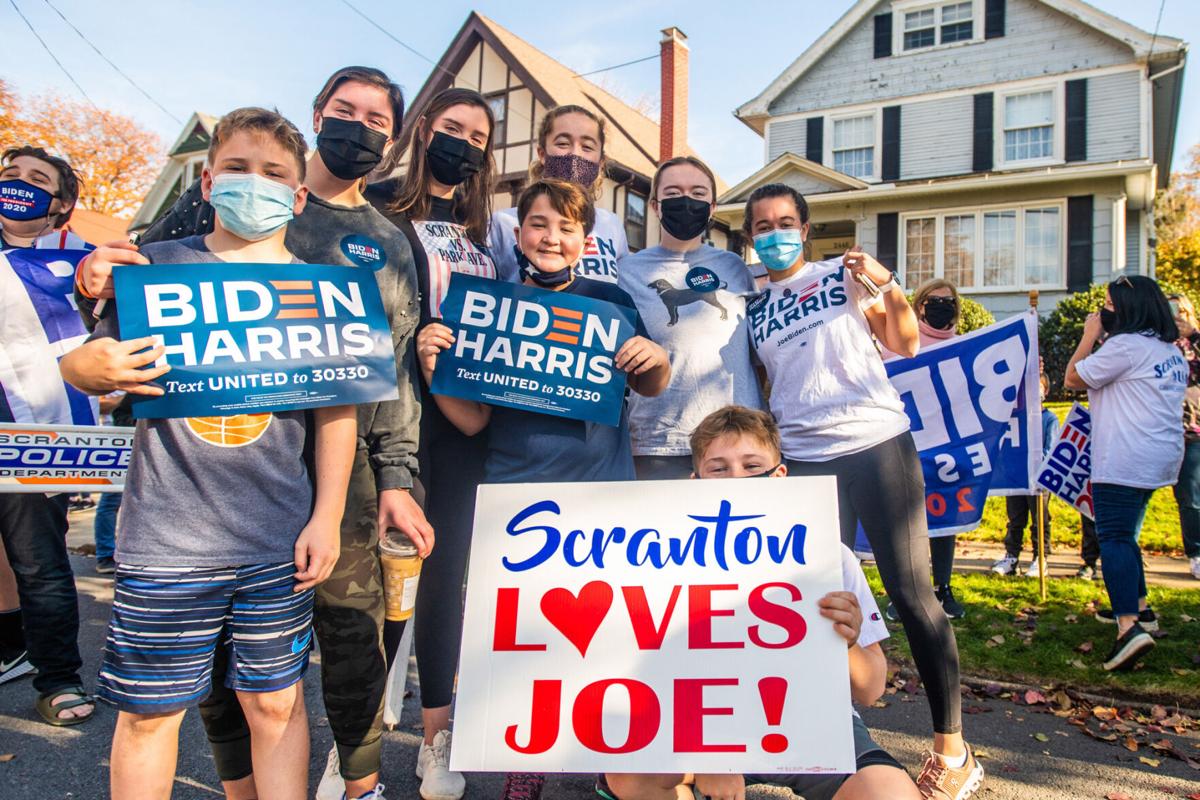 The Hayes family of Scranton, Pa., celebrates outside the childhood home of president elect Joseph Biden, after the election defeat of President Donald Trump, on Saturday. Imagespace/Zuma Press/TNS 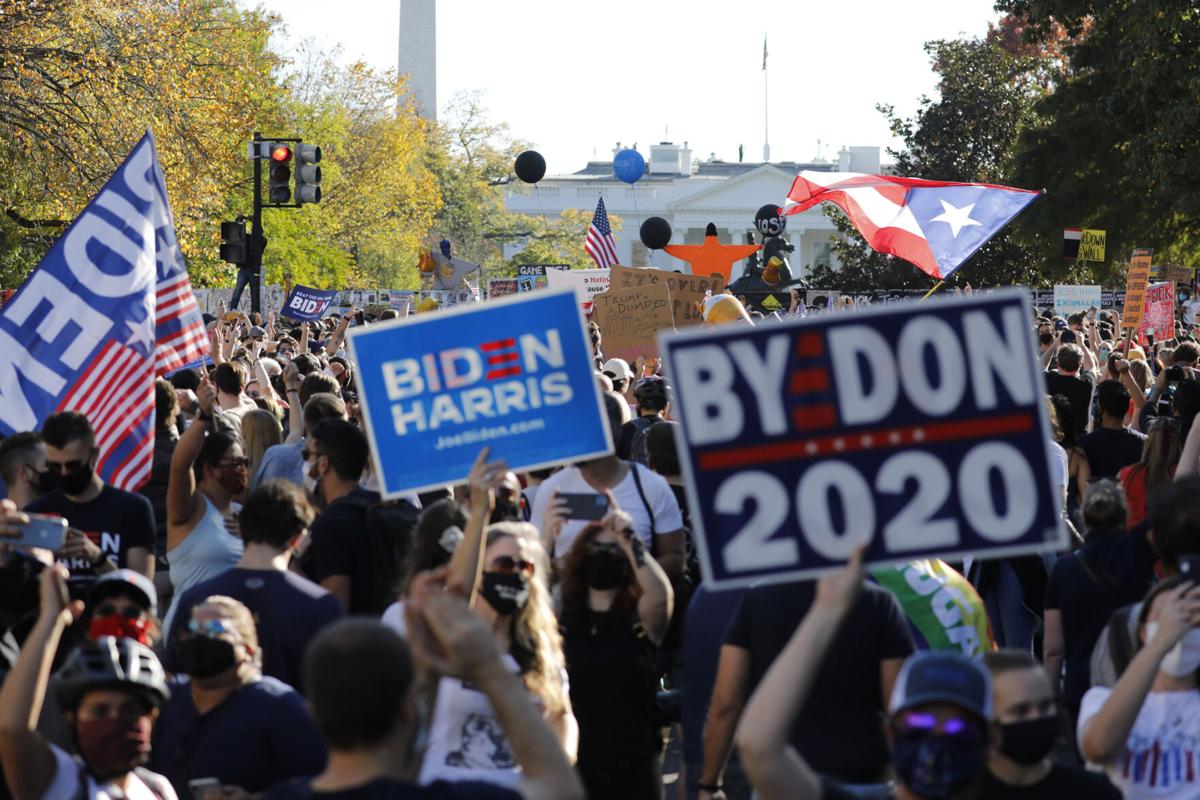 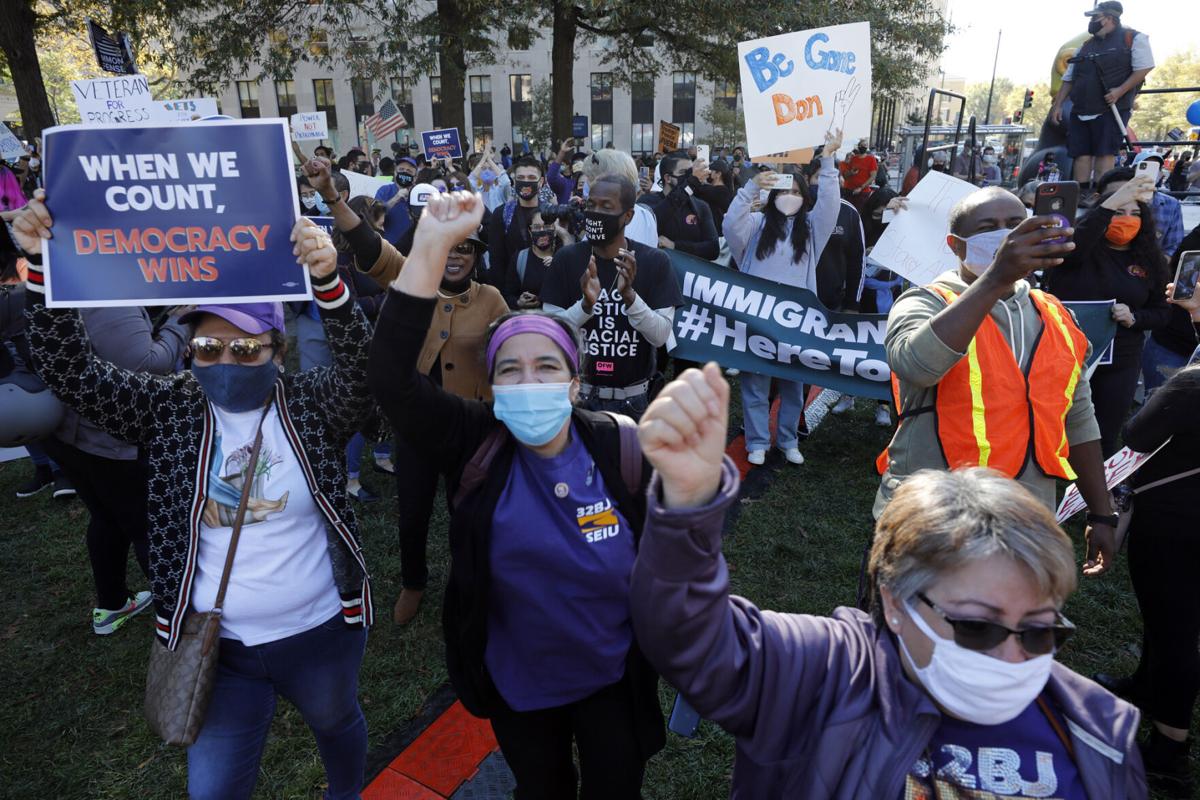 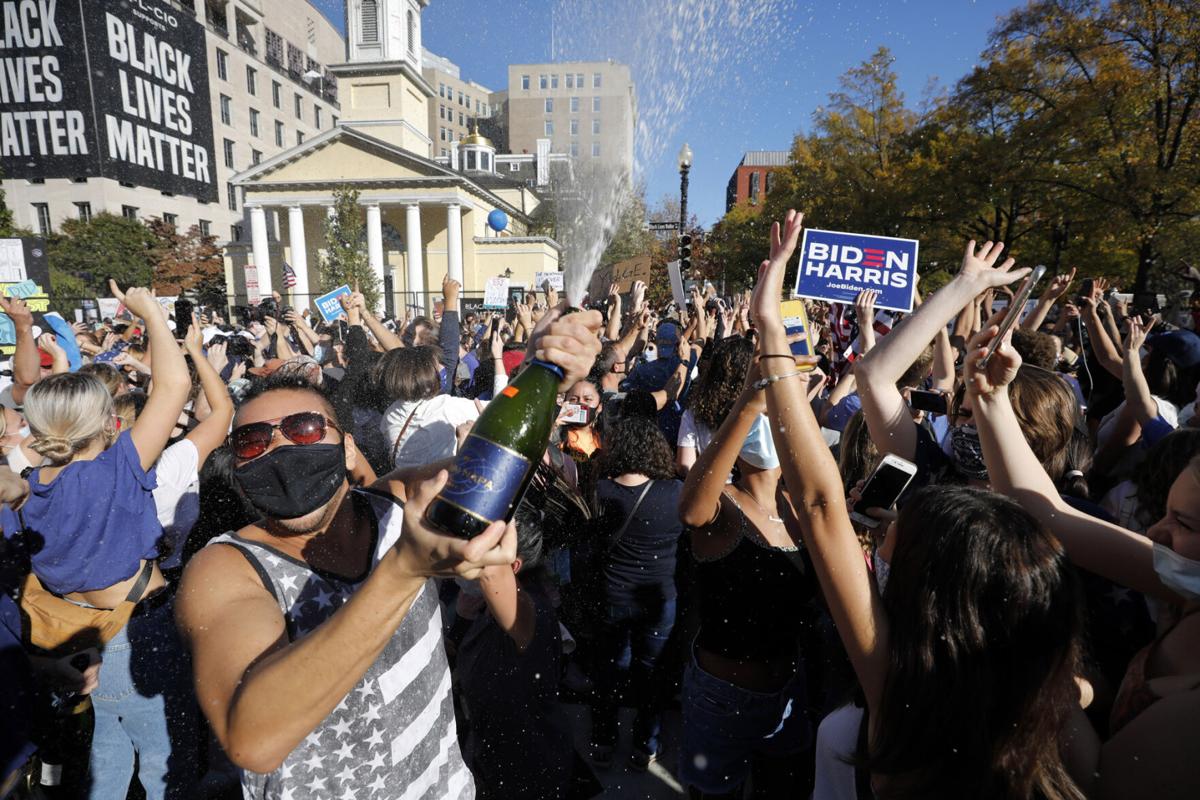 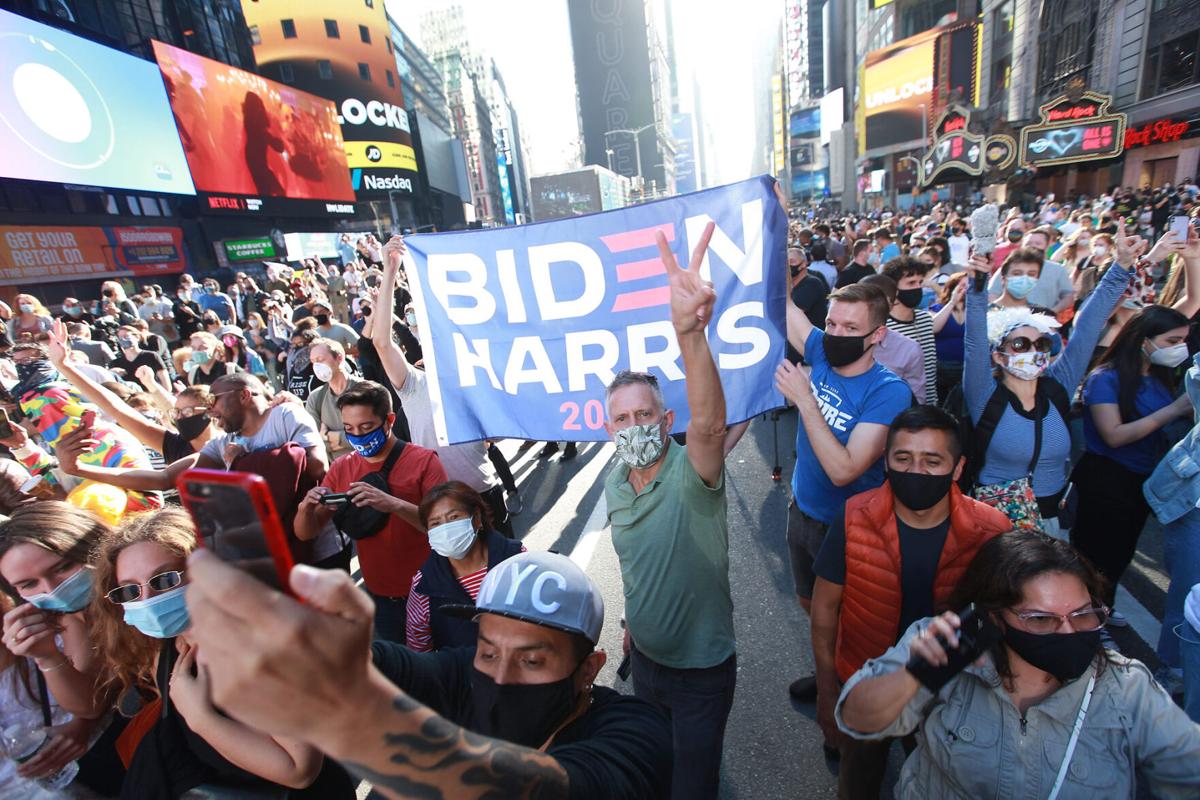 Thousands show up for a party in the streets at Times Square to celebrate the declaration of victory fo President-elect Joe Biden and Vice President-elect Kamala Harris in New York on Saturday. Kirk McKoy/Los Angeles Times/TNS

The Hayes family of Scranton, Pa., celebrates outside the childhood home of president elect Joseph Biden, after the election defeat of President Donald Trump, on Saturday. Imagespace/Zuma Press/TNS

Thousands show up for a party in the streets at Times Square to celebrate the declaration of victory fo President-elect Joe Biden and Vice President-elect Kamala Harris in New York on Saturday. Kirk McKoy/Los Angeles Times/TNS

After four years of angry division and five days of breath-held anxiety, celebrations erupted in Democratic strongholds across the country as news of Joe Biden’s victory spread, even as President Donald Trump’s supporters continued to protest the result.

A crowd gathered outside Trump Tower in Manhattan, with people shouting, “You are fired!” In Lansing, Mich., the president’s backers converged on the capitol in a state that the president-elect flipped back to the Democrats. Dozens of Trump supporters marched toward the Supreme Court in Washington for a “Stop the Steal” rally to bolster his false claims of a rigged election. And residents of Chicago, a city derided by Trump, honked horns, danced in the streets, banged pots and shot off fireworks.

In New York, hundreds converged on Washington Square Park, a staging ground of protests over the past few nights, to cheer and wave Biden signs. Across downtown Manhattan, cars honked horns and diners clapped and stood up in their restaurant seats when news networks called the race.

Carrol Cruz, 41, a photographer, and her husband left their apartment to join the crowds in Washington Square and wave a miniature American flag. “I haven’t slept for days,” Cruz said. “I kept an iPad next to my bed and kept checking for results and suddenly I heard ‘Celebration’ and the neighbors screaming and I knew they had finally come.”

Hundreds of Trump supporters gathered at the Arizona Capitol to raise questions about the results of the election. They waved Trump flags and chanted “USA” as state GOP Chairwoman Kelli Ward said she “won’t rest” until every legal vote is counted for Trump.

“It’s coming down to the skin of our teeth for President Trump,” she said.

At the U.S. Capitol, dozens of Trump supporters bearing flags and other gear marched around the grounds. The group chanted “America First” and “Stop the Steal.” Biden supporters heckled the marchers, shouting “Bye!” and occasional epithets. Some marchers stopped at the foot of the Capitol for a prayer vigil; few would speak to a reporter.

“Even if he does lose fair and square, I’d like to show my support,” said a D.C. area resident who identified himself as Pat. He said that an investigation into the election ballot count was necessary to stop unrest.

There were few signs of worry at the White House, where thousands of peaceful demonstrators danced and sang. The raucous celebration could be heard blocks away.

In Los Angeles, people stepped out of their homes to cheer on an unusually gray and chilly morning. Drivers honked and celebrities, including singer Lady Gaga and actress Kerry Washington, expressed support for Biden on Twitter. Kim Kardashian West, whose husband, Kanye, also ran for president, posted a picture of Biden and Vice President-elect Kamala Harris with three heart emojis.

In Sugar Land, Texas, a Houston suburb, Cynthia Ginyard was watching MSNBC in her den when news flashed that Biden had won the election. Ginyard, who chairs the Fort Bend Democratic Party, said Biden’s win was a huge relief — but having a woman of color as vice president is even bigger. “Earth-shattering,” she said by phone Saturday. “I can say, ‘Madam Vice President.’ I can say that.”

Fort Bend, considered the most diverse county in Texas, has become a symbol of the rapidly growing suburbs in the state and Democrats’ dream of capitalizing on those demographic shifts to loosen Republicans’ solid grip. Despite polls showing a tight race, however, Trump won Texas with little drama.

“We’ve been through so much these past four years, and now the end is in sight,” Ginyard said. “We have to put up with him until January 20th, but help is on the way.”

Chicago closed Michigan Avenue near Trump’s building there and Wacker Drive for celebrations.

Alderman Scott Waguespack said in an interview that he was “ecstatic.” Waguespack said Chicago, like municipalities across the country, have been ravaged by the health crisis and the economic fallout, and “we’ll have an administration that we will work with that focuses on the issues that we need to fix.”

Trump’s Chicago-bashing rhetoric was political theater but hardships for minority and immigrant communities were real, said Alderman Carlos Ramirez-Rosa, a member of the body’s progressive caucus.

“Those are all things we felt in our communities,” Ramirez-Rosa said. “There is hope today.”

Back in New York, on the corner of 55th Street and Fifth Avenue, at least 50 people gathered to wave American flags, some wearing Biden-Harris masks and T-shirts. It was the closest they could get to Trump Tower, which was barricaded from pedestrians.

People in cars honked while friends hugged. At least two celebrators brought kitchen pots and cooking utensils to bang together. One woman had tears pouring into her face mask and a 20-something man dropped to his chest to do “the worm” across the intersection.

“We saw the news and we immediately heard people clapping at their windows and we had to go out,” said Christine Debouck. “I thought today would be like yesterday and the day before.”

“Suddenly it was over. I’m so excited.”