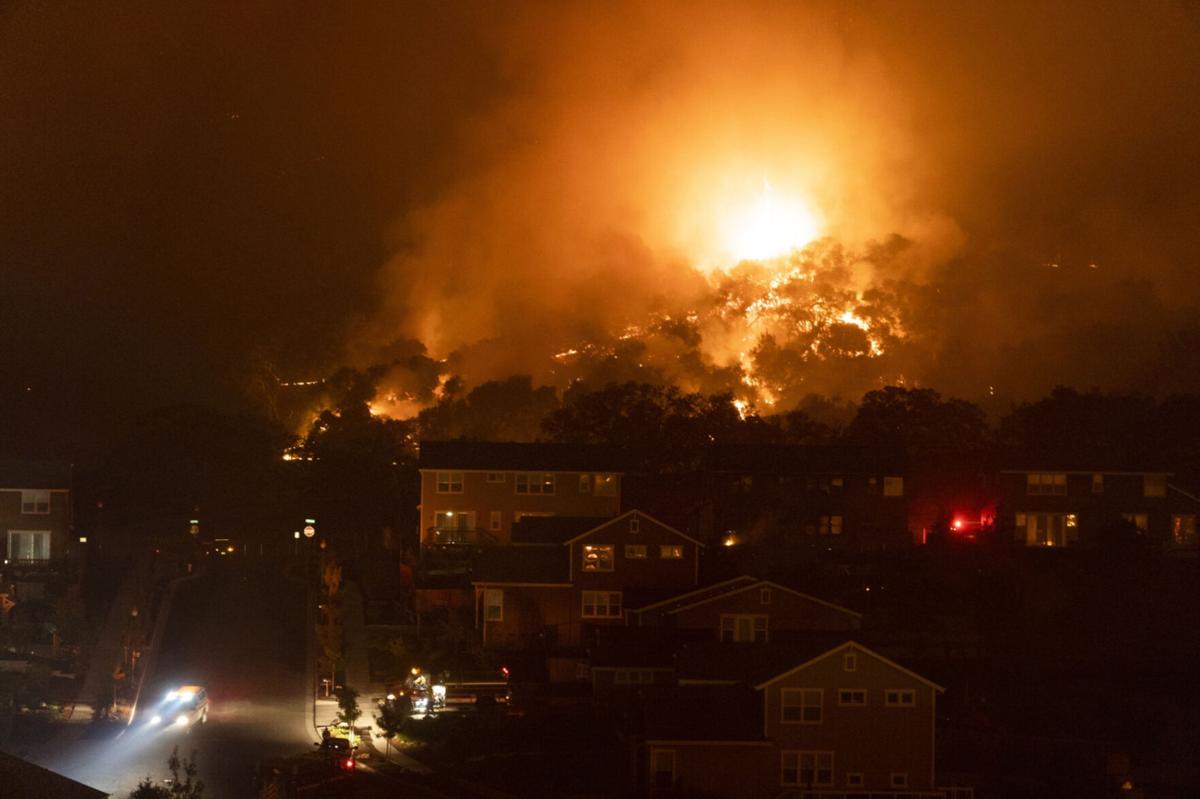 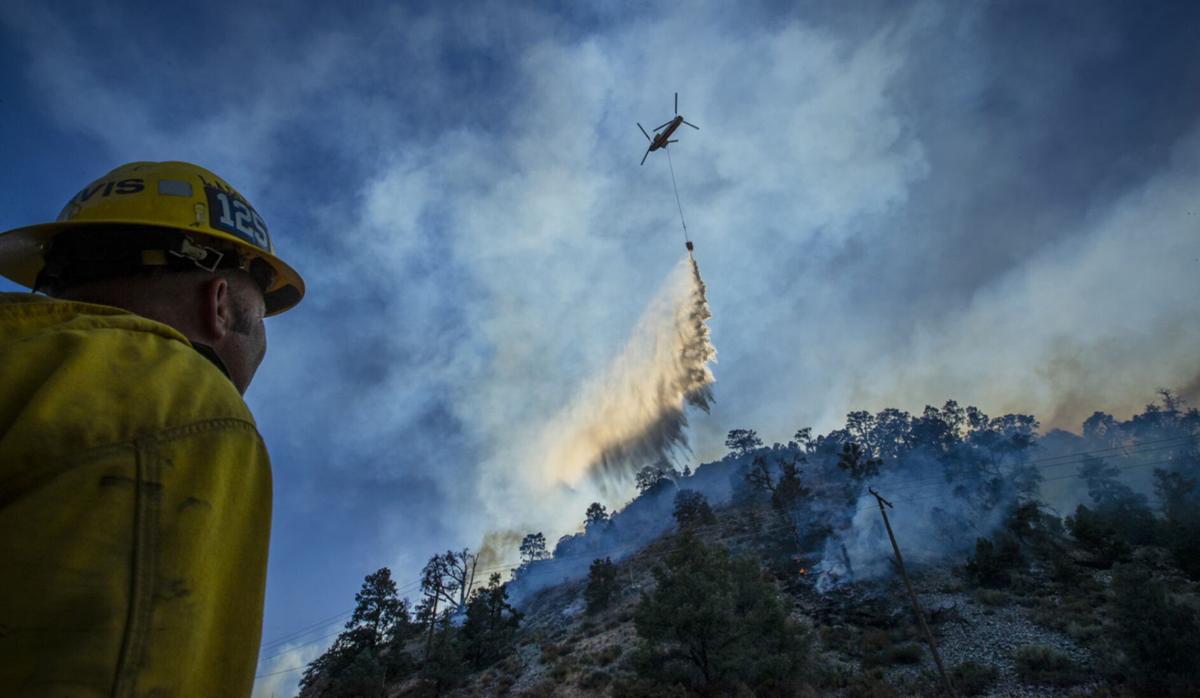 The wildfires, power outages and extreme weather that have ravaged California are setting the stage for a deepening economic crisis for an engine of U.S. growth.

Blazes that scorched 4.1 million acres, more than the past three years combined, have cost a record $1.1 billion to battle. S&P Global Ratings is warning that a new fund to help utilities cover liabilities may fall short. The state’s finances are already battered, with the coronavirus pandemic busting a $54 billion hole in the budget and hope fading for federal stimulus anytime soon.

This week has shown that wildfire season is far from over, as hot weather and dry winds spurred utility giant PG&E Corp. to cut power to about 39,000 customers to prevent flames. Taken together, the crises hammering the world’s fifth-biggest economy signal dismal possibilities about a recovery in a state suffering from rolling blackouts, smoke-filled air and apocalyptic skies. The tacit trade-offs of living in California — tolerating higher costs and deepening inequality for a good quality of life and jobs — are being compromised by climate change, raising the scenario that residents and businesses will flee.

For years, California has stood out as a symbol of economic success, with budget surpluses, record-low unemployment and booming industries from technology to entertainment. The reversal from having the best recovery among states after the previous recession should serve as a “wake-up call” on how the impacts of climate change are coming to fruition more quickly than once thought, Scott Anderson, Bank of the West’s chief economist, said.

He estimates the “one-two punch” of the fires and pandemic will push the state’s unemployment rate to 10.4% this year and 8.8% in 2021, higher than his U.S. forecast of 8.4% and 6.9%, respectively. A trend of departing residents exceeding incoming people, typical for California during downturns, could be more prolonged than in the last recession and deal a blow to the the state’s growth for decades, he said.

Frequent fires “may have inhabitants, insurers and government questioning the viability of living there and continually rebuilding,” said Patricia Healy, senior vice president of research at Cumberland Advisors. And the pandemic may trigger structural changes that could also fuel the exodus from the Golden State, such as the rise of remote work.

California, of course, has a long history of booms and busts, and it may yet emerge from the calamities with relative strength. Credit-rating companies are still holding its rating to its highest in about two decades because the state has built up reserves and overhauled practices to reduce political dysfunction. For all the talk of people leaving, the median home price in August hit a record $706,900, according to the state Realtors association.

Gov. Gavin Newsom, when asked last week about the prospect of people leaving, said the state has the ability to prosper well into the future, noting that a special edition of Time Magazine declared in 1994 that California’s best days were behind it.

“This state six, seven months ago was dominating in so many different sectors,” he said at an Oct. 5 briefing. “Those core tenets of this state remain still as alive and enlivened as they ever have been despite some of these situational challenges that we face.”

Newsom, a Democrat, has made addressing climate change a key part of his administration’s goals. Last month, he announced a target to ban new gas-fueled cars by 2035, a first among states, in a bid to mitigate carbon emissions, as well as a pledge to conserve 30% of state land and coastal water. Yet these long-term initiatives face uncertainty and difficulties in implementation.

California is spending about $205 million in fire prevention and management programs this fiscal year, down from $354 million in the prior year. The decline was driven by the budget gap and inability of the administration and legislature to an agreement on how to spend cap-and-trade dollars, which boosted the funding last year, said H.D. Palmer, a spokesperson for Newsom’s finance department. He said this year’s spending levels show that it’s a priority given that other budget items were cut significantly.

The Trump administration denied Newsom’s request for a major presidential disaster declaration for fires that burned almost 2 million acres since September. Such a decree would allow local governments to seek federal reimbursement for their costs and make it easier for residents and communities to access federal aid. The state plans to appeal the decision, said Brian Ferguson, a spokesman for the governor’s Office of Emergency Services.

The $1.1 billion in emergency spending by the California Department of Forestry and Fire Protection this fiscal year marks the first time that those costs have topped $1 billion. It’s more than triple the original budget allocation of $372.7 million, and is projected to grow to $1.3 billion, the department, known as Cal Fire, wrote in a letter to legislators this week.

Barring significant action, California’s fire trends are only expected to intensify. About 69% of the state’s economic output was exposed to fire risk in 2018, and that’s estimated to rise to 71% over the next two decades, according to the Federal Reserve Bank of San Francisco.

So far, the state has boosted homeowner protections in insurance policies and emergency response plans for counties. Legislators last year established a $21 billion fund to help utilities such as PG&E and Edison International cover future liabilities when their equipment ignites disastrous blazes, a move that shored up market confidence.

But that fund is likely to run out of money sooner than expected given “the lack of sufficient rainfall, the dry environment, and the apparent ease that relatively routine wildfires can develop into catastrophic wildfires,” S&P said last month.

Meanwhile, investors are assessing whether to buy securities sold by communities most at risk from climate change, which could lead to higher borrowing costs for them or even loss of access to the market. Bond giant Pacific Investment Management Co. demands greater compensation to hold such debt, said Sean McCarthy, head of municipal credit research.

“It’s impossible to deny that these risks are not here now,” McCarthy said. “We’re going to see the collision of climate change with the recession.”