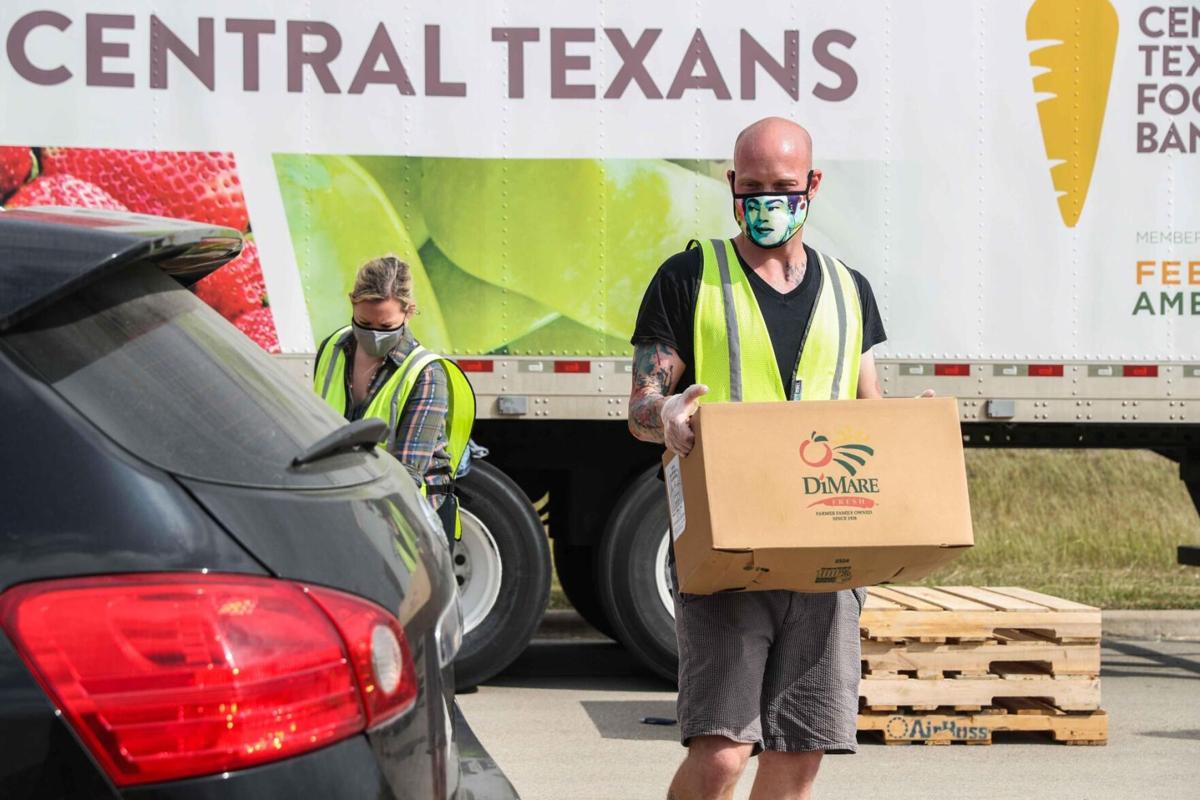 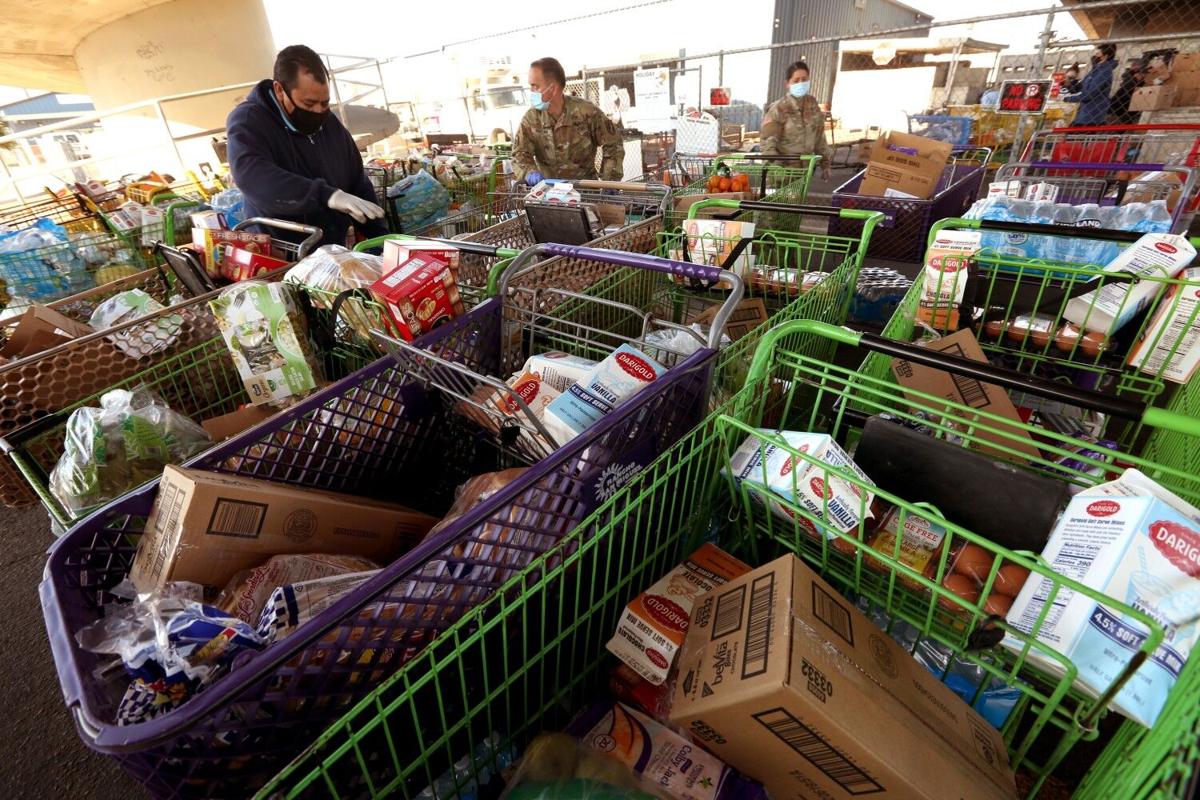 Volunteers with the Emergency Food Bank and members of the California National Guard deliver food to needy families and individuals who are reeling from the economic impact due to the pandemic in Stockton on Dec. 10, 2020. The Emergency Food Bank provides shopping carts of food for needy residents of Stockton five days a week. (Genaro Molina/Los Angeles Times/TNS)

Volunteers with the Emergency Food Bank and members of the California National Guard deliver food to needy families and individuals who are reeling from the economic impact due to the pandemic in Stockton on Dec. 10, 2020. The Emergency Food Bank provides shopping carts of food for needy residents of Stockton five days a week. (Genaro Molina/Los Angeles Times/TNS)

Even as average personal incomes rose during the pandemic largely because of government aid, millions of people who didn’t receive such help have fallen into poverty, struggling to pay for food and other basic expenses.

That group, trying to get by with the help of local charities, may have been excluded from the federal payments because of immigration status, lack of time in the labor force needed to claim unemployment benefits, or just red tape in states that have been slow to pay jobless claims.

The situation in the Houston area is particularly desperate, with almost half of residents struggling to pay basic expenses in the week ending Dec. 7, according to a Census Bureau survey. That share has grown 10 points since October to 48.4%, the highest of the 15 metro areas included. In Miami and Riverside, Calif., more than 45% of people said they had trouble paying for routine expenses such as food, rent and car payments.

Statewide, Nevada had the highest rate, at 44.7%. Experts say the hardest-hit areas have large numbers of immigrant workers who aren’t entitled to pandemic relief, or, like Nevada, have an unemployment system that has broken down under the strain of unemployment applications in the pandemic. Nevada also lacks a state income tax, which can help verify unemployment claims.

In New York, 14% of adults reported their household not having enough to eat, according to data collected between Nov. 25 and Dec. 21 by the Center on Budget and Policy Priorities from Census Bureau’s Household Pulse Survey. In 19% of households in New York, adults reported that children weren’t eating enough because they couldn’t afford food. The figures were both 2% higher than the average response across the U.S.

The new COVID-19 relief bill Congress passed in December includes help for more families with mixed immigration status, who were excluded from previous $1,200 stimulus payments. And lawmakers in some states such as New York are proposing measures that would create relief funds for workers shut out of jobless payments.

Average personal income was up in almost every state in the third quarter of 2020 compared with 2019, according to a Stateline analysis of data from the federal Bureau of Economic Analysis. That’s in part because many unemployed people were still getting supplemental $600 weekly checks through July 26, as well as the earlier $1,200 lump sum. A smaller $300 weekly unemployment supplement and $600 lump sum are in the new relief bill.

But at the same time, poverty rose more than 2 points nationwide between June and November to 11.7%, the fastest jump in history, according to a study by the University of Chicago and the University of Notre Dame. The largest increase previously recorded was 1.3 points between 1979 and 1980, during a deep recession caused by a spike in oil prices.

The recent increase of 7.8 million more people in poverty hit minorities and those without a college education the hardest, along with residents of states with less effective unemployment systems, said Bruce Meyer, a co-author of the study and University of Chicago professor of public policy.

While the unemployment rate has dropped since its springtime high — the rate declined from 14.7% in April to 6.7% in November — low-wage restaurant and hospitality jobs have been slow to come back, and many of those employers are now shutting down again as the virus surges.

Even people able to get government help may have fallen into poverty as extra jobless aid expired, Meyer said.

“Those payments were a long time ago. There’s a lot of people who have been out of work since the spring,” Meyer said. “They used up their savings, stopped paying bills and borrowed money from family and friends. Now they’re cutting back on groceries and those bills are really starting to accumulate. Their situation has gotten a lot more dire.”

In a Dec. 17 report, the left-leaning Economic Policy Institute and National Employment Law Project called on states to start relief funds to “provide financial assistance for unemployed immigrant workers and other jobless workers shut out of unemployment insurance programs.”

A petition for such a plan, which would raise taxes on wealthy residents to provide $3.5 billion for excluded workers, is circulating in New York state, and a similar bill was proposed in the state Assembly and Senate. Both bills are still in committee.

“While our communities die during the pandemic, (rich New Yorkers’) wealth keeps increasing,” said Assemblywoman Carmen N. De La Rosa of Manhattan in a December news conference supporting the bill. In the New York City area, 43.7% of people had trouble paying bills in December, up 10.7 percentage points since August.

City and state revenue have declined during the pandemic, making aid to workers excluded from payments a hard sell. Washington, D.C., considered a $33 million fund, but it was deemed too costly. In April, the city’s convention authority approved $18 million for hospitality workers, including $5 million for immigrants without legal status.

Immigrants are a large share of the people not receiving aid. Others include people with criminal convictions, new graduates without a work history, and people who have experienced gaps in employment, said Paul Sonn, state policy director for the National Employment Law Project.

For instance, of the 500,000 people who applied for extended unemployment in North Carolina during the pandemic, 140,000 were denied.

“All kinds of people are falling through the cracks in the unemployment insurance system, and almost all the federal assistance programs piggyback on state unemployment,” Sonn said. “So, for them there’s no safety net, no stimulus checks.”

Hospitality workers in low-wage jobs, already struggling before, are even more financially stressed on unemployment benefits that pay even less.

Damani Varnado, a New York City actor who supplemented his sporadic voiceover and acting gigs with a server job at a Tribeca restaurant, has been behind on rent and utilities since work dried up on both fronts in February and March.

“I’m living within my means, negotiating with my landlord because I don’t want to fall too far behind, and trying to hang in there because there is light at the end of the tunnel and I want to keep living in New York,” Varnado said.

Some of his friends get only $100 a week or less because their nominal pay was less than minimum wage, a practice banned in some states but not in New York. Varnado is a board member for One Fair Wage, a group lobbying to raise wages for tipped workers and fundraising to help such workers.

Tips, as much as 70% of pay for such workers, are part of the pay calculation for unemployment but they fell off drastically at the start of the pandemic and some workers didn’t report cash tips to avoid taxes.

Hard-pressed Houston has seen an influx of asylum seekers from Central America attracted by the area’s booming pre-pandemic economy, though many have had a hard time finding work.

“For the undocumented immigrants, the pandemic was a disaster on top of a disaster,” said Francisco Arguelles, executive director of the Living Hope Wheelchair Association, a Houston-based charity that helps immigrants with disabilities who don’t have health insurance.

Already struggling with food and rent costs before the pandemic, many immigrants have turned to local charities like food banks, moved in with friends and family in increasingly crowded conditions, and gathered in fast-food parking lots for Wi-Fi for their children’s schooling, Arguelles said.

Ana, a 31-year-old single mother and immigrant from Mexico living in the U.S. illegally, found it particularly hard to find work in the Houston area while caring for her five children, all U.S.-born citizens, in a home owned by her father. Local charities helped her get through until she found a way to support the family by baking cakes and other desserts at home.

“They did so much for me. They helped me with food and clothes and little things like birthday presents for my children — that was so important,” she said.

Houston-area food banks are employing some out-of-work restaurant employees to help with food distribution, regardless of immigration status, through a relief initiative called Get Shift Done.

Food banks in the area distribute about 800,000 pounds of food a day, twice the amount they did last year, said Paula Murphy, a spokesperson for the Houston Food Bank, which covers 18 counties in Southeast Texas.

But Texas food banks are fighting a state funding cutback triggered by across-the-board state budget cuts because of falling tax revenue. The $1.9 million cut came from money used to send surplus farm produce to food banks, and Feeding Texas, an umbrella organization for 21 food banks, has opposed the reduction.

The Texas Department of Agriculture has asked for more money for food banks, possibly from federal funds, when the legislature convenes next week, said department spokesperson Mark Loeffler.

Even immigrants with legal permission to work have trouble getting by, especially with new “public charge” rules that discourage immigrants who hope for a green card from using public benefits.

Adesola Ogunleye, 33, who has legal work permission since she was brought to the U.S as a child from Nigeria and has DACA (Deferred Action for Childhood Arrivals) status, got a dream job in January, helping to manage a Philadelphia restaurant for $18 an hour. But the restaurant closed in March, and when it reopened, Ogunleye decided it was too risky to go back since she has diabetes and COVID-19 would especially dangerous for her.

She qualified for unemployment at $175 a week, but “that’s not enough to pay any bills,” she said. Friends have helped her, she said, directly and through online fundraisers, and a consortium of restaurants sometimes makes meals for her and other out-of-work restaurant employees.

She felt she couldn’t ask for food stamps or help paying her utility bills because she was told those would endanger her prospects for getting a green card and eventual citizenship. That’s a valid concern for immigrants hoping for a green card, also known as legal permanent resident status, which is a step on the way to citizenship, said Randy Capps, director of research at the nonpartisan Migration Policy Institute in Washington, D.C.

Utility help is not considered under the public charge rule, Capps said, but many immigrants turn down benefits they’re entitled to out of worry about the rules. The rule had a chilling effect on immigrant use of such benefits, according to a December study co-authored by Capps.