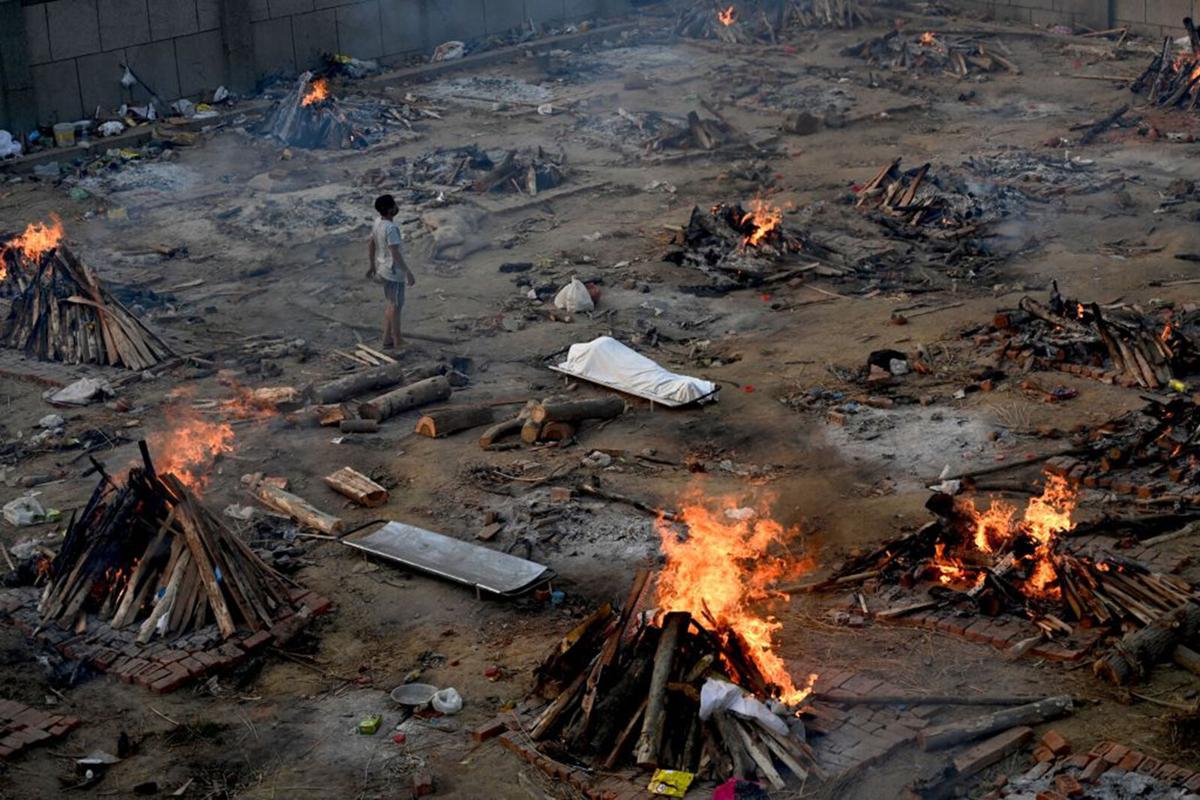 A man stands amid burning pyres of victims who lost their lives due to the COVID-19 coronavirus at a cremation ground in New Delhi on April 26. Money Sharma/AFP via Getty Images/TNS 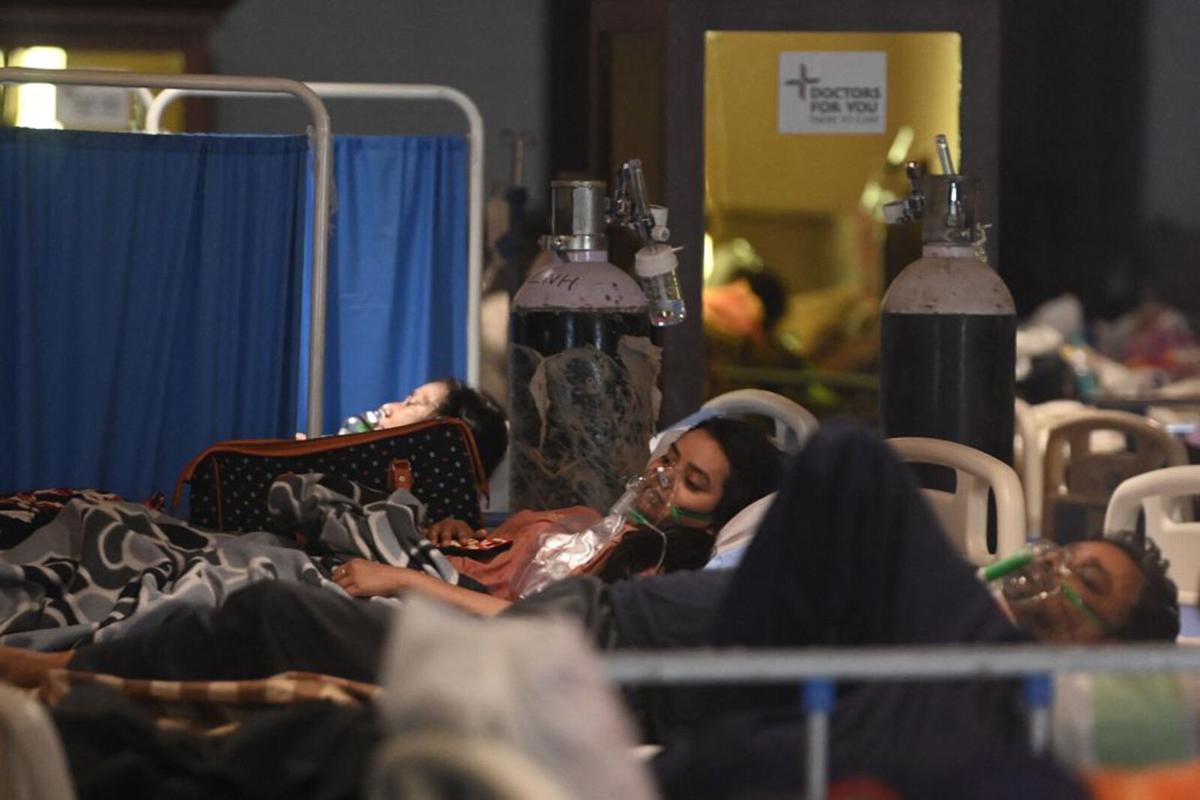 Patients breath with the help of oxygen masks inside a banquet hall temporarily converted into a Covid-19 coronavirus ward in New Delhi on April 27. Money Sharma/AFP via Getty Images/TNS 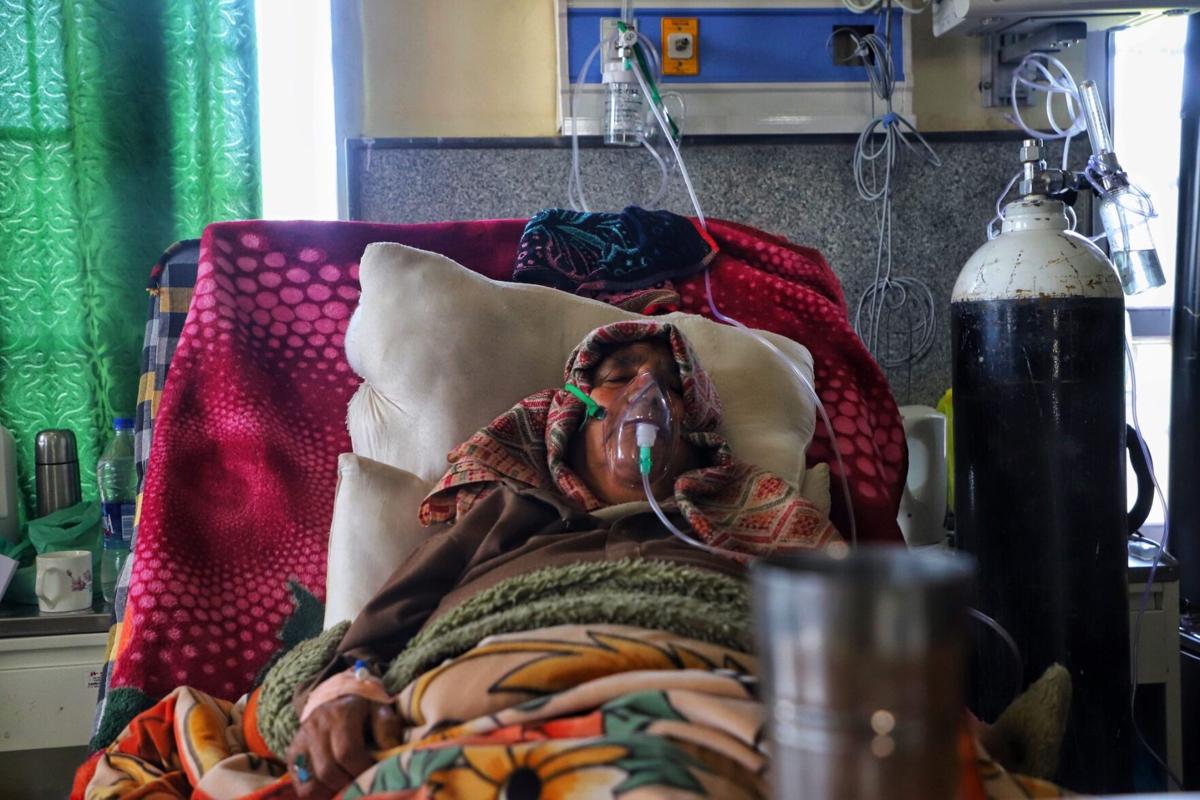 A Kashmiri woman suffering from breathing difficulty due to coronavirus disease (COVID-19), receives oxygen at a COVID-19 Centre Kashmir, India. In the Union Territory of Jammu and Kashmir, a complete lockdown is to be imposed in 11 districts though May 3 in view of the alarming surge of the positive cases being reported. Among the 20 districts of Jammu and Kashmir, Srinagar district is the worst affected where cases continue to show an unabated rising trend. Nasir Kachroo/NurPhoto via ZUMA Press/TNS

A man stands amid burning pyres of victims who lost their lives due to the COVID-19 coronavirus at a cremation ground in New Delhi on April 26. Money Sharma/AFP via Getty Images/TNS

Patients breath with the help of oxygen masks inside a banquet hall temporarily converted into a Covid-19 coronavirus ward in New Delhi on April 27. Money Sharma/AFP via Getty Images/TNS

A Kashmiri woman suffering from breathing difficulty due to coronavirus disease (COVID-19), receives oxygen at a COVID-19 Centre Kashmir, India. In the Union Territory of Jammu and Kashmir, a complete lockdown is to be imposed in 11 districts though May 3 in view of the alarming surge of the positive cases being reported. Among the 20 districts of Jammu and Kashmir, Srinagar district is the worst affected where cases continue to show an unabated rising trend. Nasir Kachroo/NurPhoto via ZUMA Press/TNS

MUMBAI, India — The bodies have burned for so long at crematoriums in the western state of Gujarat that furnaces have started to melt.

Firewood for funeral pyres is rationed and sparse, leaving the dead half-cremated on the banks of the Ganges. Gravediggers in the capital New Delhi are in such high demand that families are hiring them to excavate plots while stricken loved ones are still alive.

All across India, a trail of death and misery is devastating a country whose leaders boasted of defeating the coronavirus just a few months ago. An explosion of new cases fueled by the so-called double mutant variant of the coronavirus first discovered in India is now pushing the nation’s overburdened health care system toward collapse.

About 350,000 new infections are being reported each day, a record for any country since the virus first emerged from China more than a year ago, killing in excess of 3.1 million people worldwide.

Oxygen is in short supply and dying patients take their breaths in hallways, waiting rooms and outside the gates of Indian hospitals too overwhelmed to accept new patients. It is like this every day; eerie marches of the sick and dying, crowding alleys and wider streets, as if ghosts from a centuries-old plague.

Many Indians are logging on to Twitter for the first time, pleading for help in finding oxygen tanks, which now sell on the black market for double to triple the amount of a a worker’s monthly salary. Exhausted nurses complain of urinary tract infections because they can’t take bathroom breaks during shifts that never seem to end.

“Everyone just feels helpless,” said Chaithra Kodmad, 28, an emergency room doctor at a private hospital in Bengaluru, which has run out of beds in its intensive care unit. “This virus is everywhere. It’s entered peoples’ homes. It doesn’t care what age you are, what caste you belong to. It doesn’t matter.”

Kodmad, like many other health care workers in India, said vaccinated colleagues are still being infected by the double mutant variant, which earned its name from a pair of mutations derived from a highly infectious variant prevalent in California and another thought to be resistant to vaccines that was first found in South Africa.

Experts are trying to pinpoint what impact variants have had in the outbreak. The World Health Organization said this week that the variant from India, officially known as B1617, has been detected in at least 17 countries, including the U.S.

But it is striking here with swift cruelty. The outbreak has already disrupted India’s pledge to provide millions of doses of the vaccine to developing countries. India, which is home to the world’s largest vaccine manufacturer and the maker of the AstraZeneca shot, the Serum Institute, has stopped exports to address domestic shortages.

The crisis — exposing the divide between rich and poor nations — threatens to prolong the global pandemic just as Western counties such as the United States have stepped up vaccines and loosened COVID-19 restrictions.

India also thought it was turning the corner at the start of the year after undergoing a painful lockdown that was politically unpopular and left millions of mostly migrant workers jobless. With only a few thousand reported daily cases in the country of 1.4 billion, a sense of triumphalism had taken root.

The country’s ruling Bharatiya Janata Party claimed COVID-19 had been “defeated” under the leadership of Prime Minister Narendra Modi. The health minister said India had reached the “endgame” of the disease. People started to emerge from isolation, relishing the opportunity to return to public gatherings.

In March, more than 50,000 fans sat shoulder to shoulder, many without masks, to watch India contest England in cricket at Narendra Modi Stadium in Ahmedabad, the largest city in Gujarat. In April, thousands attended election rallies in West Bengal for the country’s by-elections. Meanwhile, millions of pilgrims celebrated the Hindu festival Kumbh Mela by taking dips in the sacred Ganges and Yamuna rivers.

And then it happened. An uptick in cases spiraled into a surge. India became a cautionary tale for a world wanting to rush back to its rhythms. This nation was adding 30 times as many reported cases as it did in February. Because of insufficient testing, the actual number of infections and deaths is estimated to be many times higher.

Health experts are calling for aggressive actions, including new lockdowns and a national mobilization to secure supplies of oxygen, hospital beds and medication. Social and economic assistance will be needed to help the tens of millions who live hand to mouth.

“The best-case scenario is that this current wave would peak by mid-May and begin to improve over the next few weeks following that,” said Krishna Udayakumar, founding director of the Duke Global Health Innovation Center at Duke University. “We are still looking at weeks to months of tragic outcomes across India.”

Tragedies are playing out in incalculable ways each day in the world’s second-most populous nation. Last week, 24 COVID-19 patients died when an oxygen tank leaked at a hospital in Nasik, a holy city 100 miles northeast of Mumbai.

“Patients on ventilators were gasping for air, squirming in agony,” said Yuvraj Mungse, who watched his 62-year-old uncle perish in the incident. “There was panic in the ward. We watched them suffocate to death in front of us.”

Rakesh Srivastava, a transportation business owner in the northern city of Varanasi who lost his 45-year-old wife to COVID-19 two weeks ago, said he waited in line for five hours to cremate her body along the ghats, or steps, of the Ganges.

“There were so many bodies being burnt,” said Srivastava, 48. “The people at the ghats were running out of wood.”

At the center of India’s crisis is a health care system that ranks among the world’s worst, according to the WHO.

Indians are scrambling for assistance. Wheezing patients journey for hours to different cities in the hopes of finding medical attention. Anyone with means — particularly health care workers — are receiving dozens of calls a week from family and friends asking for leads.

Ruben Mascarenhas, a social activist in Mumbai who runs a 24-hour COVID-19-related helpline, said his team of 50 workers receive about 1,000 calls a day. They’re able to help less than half of those secure what they need, be it hospital beds, ventilators, plasma or oxygen cylinders.

“Our system is broken even during normal times,” said Mascarenhas, 33. “We can’t really expect it to work in the pandemic. ... Our heart breaks every time a case goes unresolved. It is like a continuing nightmare. You have one in the day. You have one at night. And it keeps going on like that.”

The severity of the outbreak has brought sympathy and help even from enemies such as Pakistan, which has offered to send medical equipment and ambulances. China, another geopolitical rival and neighbor, has also pledged support.

President Joe Biden promised to provide “a range of emergency assistance, including oxygen-related supplies, vaccine materials and therapeutics,” according to a White House readout of a phone call Monday with the Indian prime minister.

Washington has been widely criticized in India for not acting sooner, including lifting an embargo on raw materials needed to manufacture vaccines. The international support is welcomed, but will do little to stop thousands more dying each day for the foreseeable future.

The steady and increasing pace in which the dead appear at Jadid Qabristan Ahle, Delhi’s largest Muslim cemetery, is weighing heavily on Mohammad Shamim.

The 38-year-old father of four who has worked as a gravedigger since he was a teenager said the number of COVID-19 victims he inters has grown from an average of two a week to 15 to 20 a day in the last month.

“We are running out of space,” Shamim said, adding that the dwindling number of available plots has spurred people to notify him in advance that they need his services before a person has died.

“I have not experienced this before,” he said.

Shamim sleeps in a makeshift hut in the graveyard to avoid going home and risk infecting his wife and children. He has no one to console him after another day surrounded by grieving and often hysterical relatives of the deceased. One of the many indignities of the pandemic is the way victims must be tightly wrapped in white cloth to contain infection, barring family from taking one last glimpse.

“Everyone wants to see their loved ones one last time,” Shamim said. “I have to be ruthless and not allow it. But relatives often get nasty and say hurtful things. I can’t say anything to them either because they are distraught.”