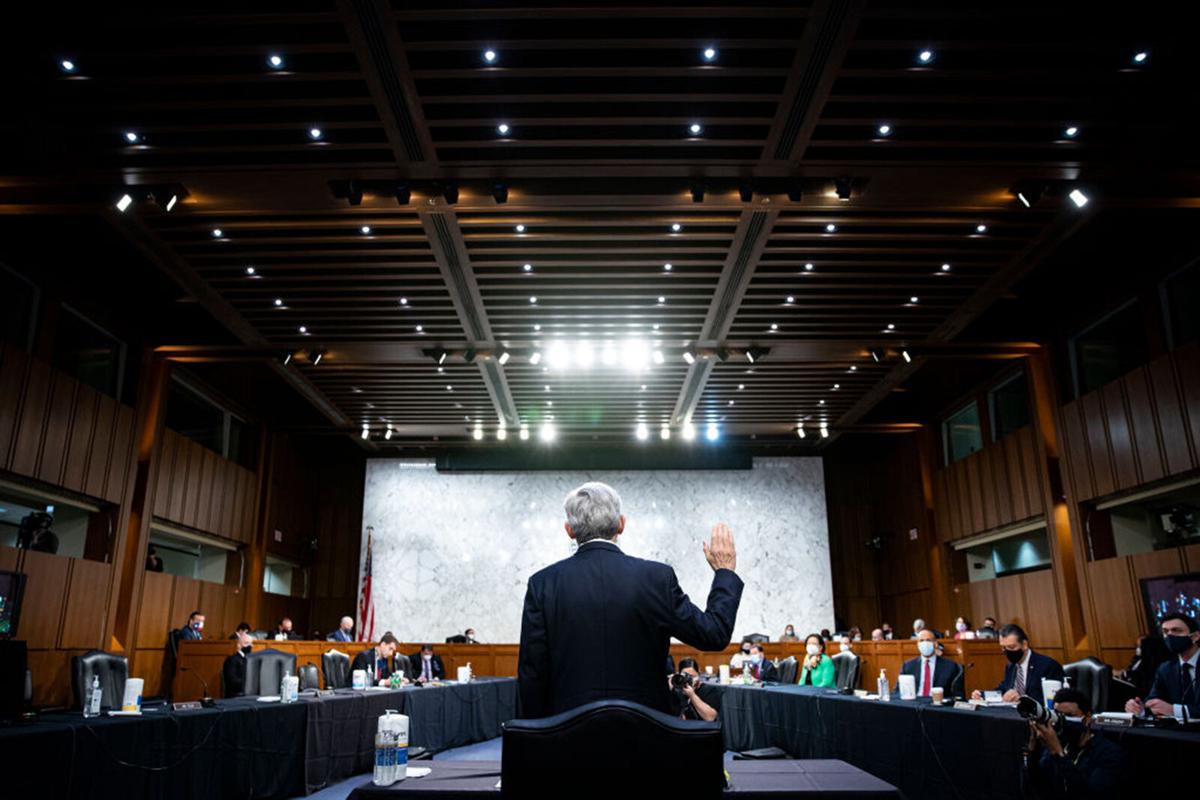 Attorney General nominee Merrick Garland is sworn-in during his confirmation hearing before the Senate Judiciary Committee in the Hart Senate Office Building on Monday in Washington, DC. Garland previously served as the Chief Judge for the U.S. Court of Appeals for the District of Columbia Circuit. Al Drago/Getty Images/TNS 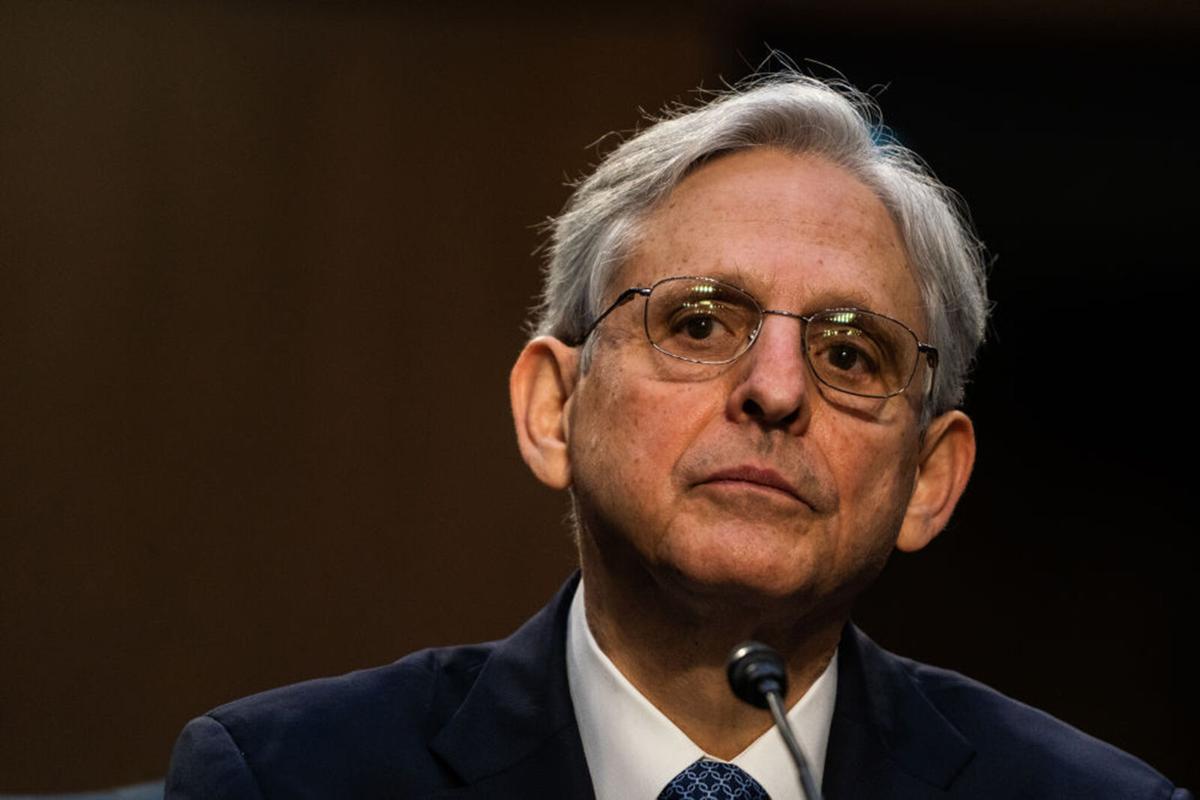 Attorney General nominee Merrick Garland speaks during his confirmation hearing in the Senate Judiciary Committee on Capitol Hill on Monday in Washington, DC. Garland was previously the Chief Judge on the U.S. Court of Appeals for the D.C. Circuit and former President Barack Obama’s nominee for the Supreme Court. Demetrius Freeman-Pool/Getty Images/TNS

Attorney General nominee Merrick Garland is sworn-in during his confirmation hearing before the Senate Judiciary Committee in the Hart Senate Office Building on Monday in Washington, DC. Garland previously served as the Chief Judge for the U.S. Court of Appeals for the District of Columbia Circuit. Al Drago/Getty Images/TNS

Attorney General nominee Merrick Garland speaks during his confirmation hearing in the Senate Judiciary Committee on Capitol Hill on Monday in Washington, DC. Garland was previously the Chief Judge on the U.S. Court of Appeals for the D.C. Circuit and former President Barack Obama’s nominee for the Supreme Court. Demetrius Freeman-Pool/Getty Images/TNS

WASHINGTON — Merrick Garland, President Joe Biden’s nominee to be the next attorney general, told Congress on Monday that the investigation into the attack last month on the U.S. Capitol would be his top priority if confirmed to become the nation’s top law enforcement official.

“This was the most heinous attack on the democratic processes that I’ve ever seen, and one that I never expected to see in my lifetime,” Garland testified before the Senate Judiciary Committee, saying he intended to give agents and prosecutors “all the resources they could possibly require to do this” investigation.

“I am not the president’s lawyer,” Garland testified. “I am the United States’ lawyer, and I will do everything in my power, which I believe is considerable, to fend off any effort by anyone to make prosecutions or investigations partisan or political in any way.”

The committee, which will hear from other witnesses today as it examines Garland’s record and qualifications, could vote on the nomination as early as March 1, and a vote on the Senate floor would follow soon thereafter. Garland is expected to win easy confirmation.

Democrats, who frequently complained about the Trump administration’s stonewalling of congressional investigations, also won a commitment from Garland to cooperate with their inquiries into the Justice Department. Sen. Richard Durbin, D-Ill., the panel’s chairman, asked Garland if he would cooperate with his committee’s probe into the former administration’s policy of separating children from undocumented parents caught by authorities. “I think that the policy was shameful,” Garland testified. “I can’t imagine anything worse than separating caring parents from their children.”

Among his highest priorities, Garland testified, would be beefing up enforcement of civil rights and voting rights laws. “Communities of color and other minorities still face discrimination in housing, education, employment, and the criminal justice system,” he testified, adding that such groups also “bear the brunt of harm caused by pandemic, pollution, and climate change.”

Garland is not expected to get much of a honeymoon if confirmed. He will immediately be tasked with supervising the prosecutions of scores of people who are alleged to have attacked the Capitol and implementing the Biden administration’s progressive policies. The Justice Department has charged more than 250 individuals in the Jan. 6 storming of the Capitol, an attack by a pro-Trump mob that put the lives of lawmakers, staffers, the public, reporters and police officers at risk. The Justice Department has said scores of police officers were injured in the assault. Five people, including a police officer, died during the siege.

In his testimony, Garland signaled the Justice Department’s investigation into the siege would be an expansive one. “I intend to make sure that we look more broadly,” he said, “to look at where this threat is coming from, what other groups there might be, that that could raise the same problem in the future, and that we protect the American people.”

A graduate of Harvard Law School, Garland worked for a big law firm before joining the Justice Department in the 1980s to become a prosecutor. When Bill Clinton became president, Garland was tapped to take a top role in the deputy attorney general’s office. From that perch, he helped supervise the investigation into the Oklahoma City bombing, the worst act of domestic terrorism in U.S. history. More than 165 people died in the explosion. In his testimony Monday, Garland said the experience overseeing the 1995 bombing investigation had informed his thinking on how to battle the threat posed by domestic terrorists and extremists.

Garland left the Justice Department in 1997 when he won confirmation to become a judge on the U.S. Court of Appeals for the D.C. Circuit, which is considered one of the most influential courts in the nation.

Despite blocking Garland’s assent to the Supreme Court five years ago, powerful Republicans have signaled they respect the judge and consider him to be a moderate alternative to more progressive candidates Biden was considering. Influential Republicans on Monday indicated they supported Garland’s nomination. “I think you are a very good pick for this job,” Sen. Lindsey Graham, R-S.C., said.

Sen. Chuck Grassley of Iowa, the ranking GOP senator on the panel, said: “No one doubts that Judge Garland is qualified for the job. ... I just want to say that I like you, I respect you.”

In response to questions from Graham and Grassley, Garland pledged to respect special counsel John Durham’s inquiry into the federal investigation of Russia’s meddling in the 2016 election and alleged ties between Moscow and the Trump campaign. “I understand that he has been permitted to remain in his position,” Garland said, referring to Durham, who was appointed special counsel by Attorney General William Barr. “Sitting here today I have no reason to think that that was not the correct decision. ... I don’t have any reason to think that he should not remain in place.”

Garland told Graham he had read the executive summary to a lengthy Justice Department Inspector General report published in December that revealed major failings in how the FBI obtained warrants from the Foreign Intelligence Surveillance Court to clandestinely gather information on a former Trump campaign adviser. “There were certainly serious problems with respect to FISA applications,” Garland said, adding that he believed the FBI was working to address the shortcomings.