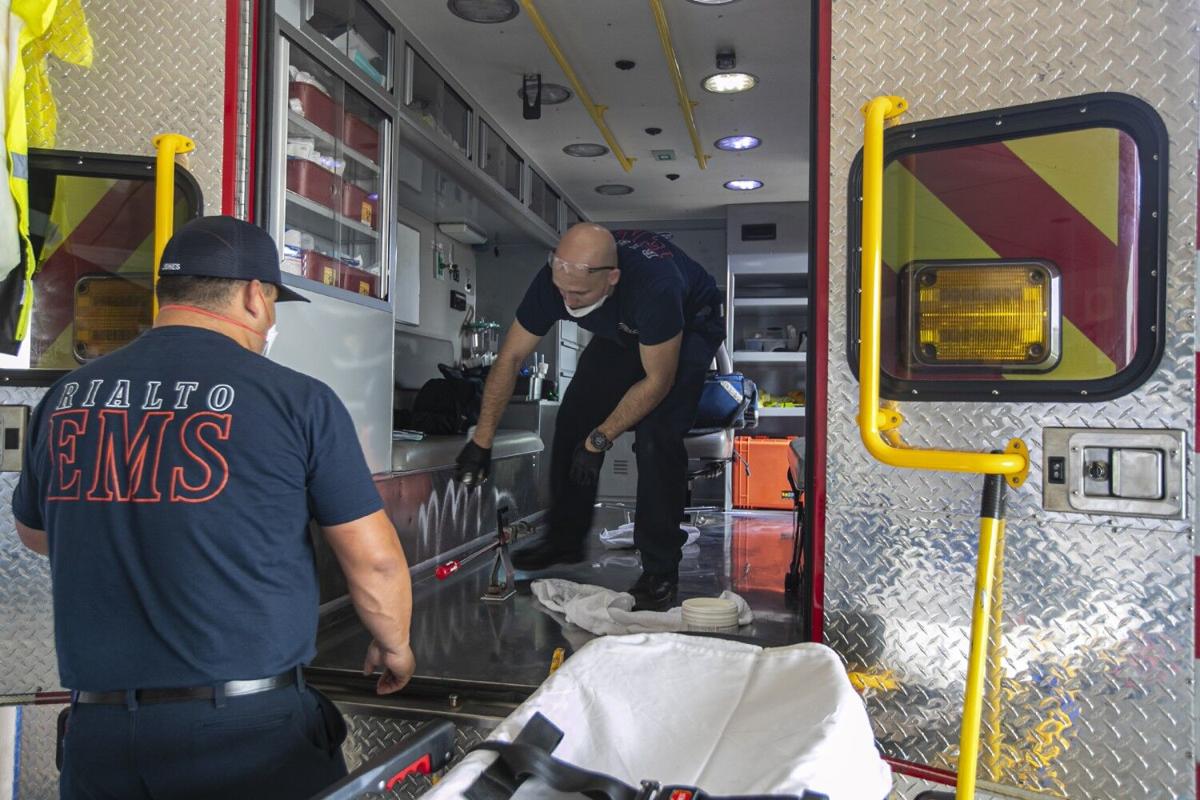 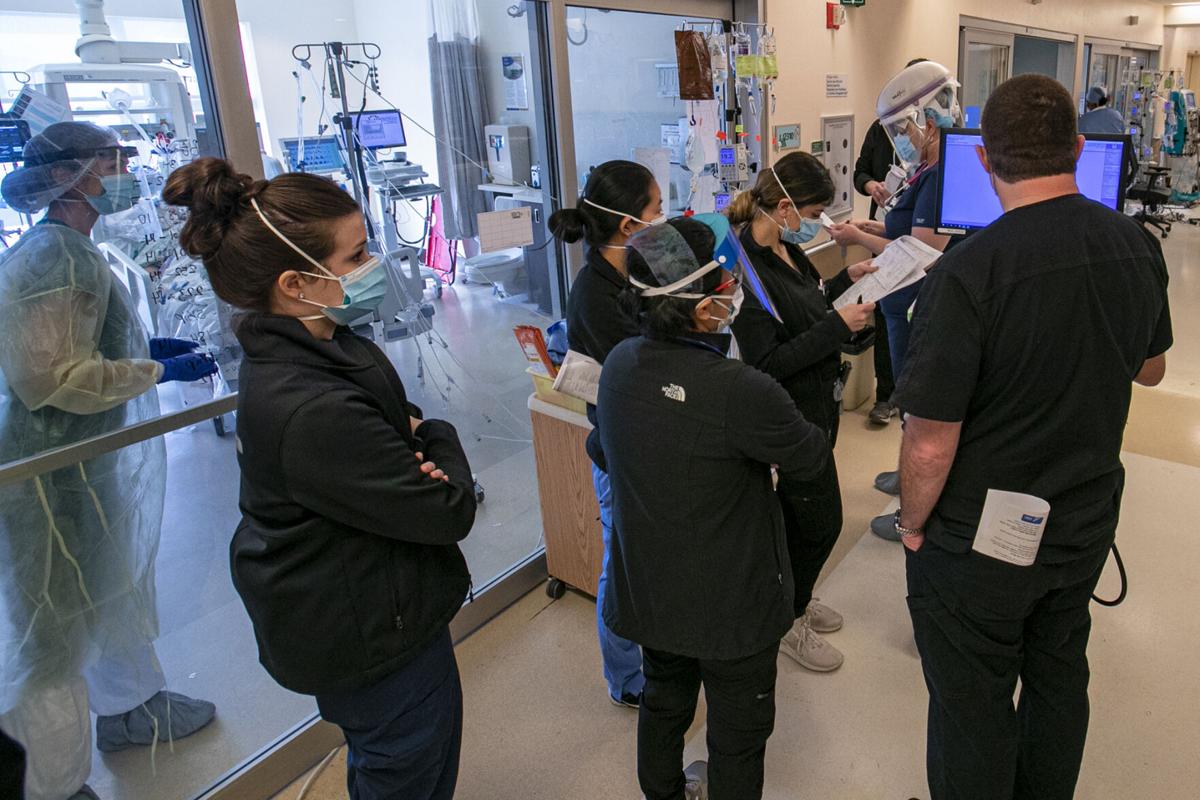 Arrowhead Regional Medical Center, like many other hospitals, is struggling with the surge in COVID-19 patients. Staff is seen at Arrowhead on Dec. 23 in Colton, Calif. Irfan Khan/Los Angeles Times/TNS 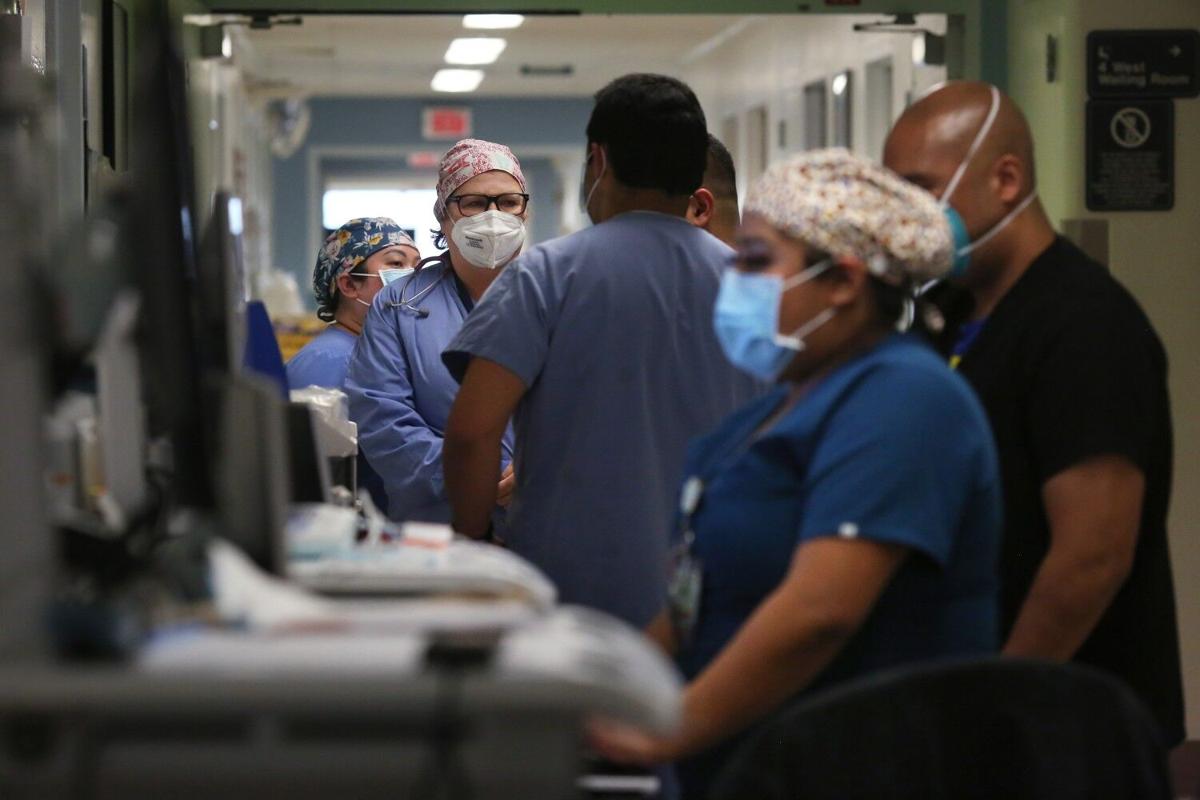 Hospital doctors and nurses work treating COVID-19 patients in a makeshift ICU wing at Harbor UCLA Medical Center on Dec. 29 in Torrance, Calif. The hospital has no open beds for incoming patients and has worked tirelessly to create additional beds for the influx of COVID-19 patients. Dania Maxwell / Los Angeles Times/TNS

Arrowhead Regional Medical Center, like many other hospitals, is struggling with the surge in COVID-19 patients. Staff is seen at Arrowhead on Dec. 23 in Colton, Calif. Irfan Khan/Los Angeles Times/TNS

Hospital doctors and nurses work treating COVID-19 patients in a makeshift ICU wing at Harbor UCLA Medical Center on Dec. 29 in Torrance, Calif. The hospital has no open beds for incoming patients and has worked tirelessly to create additional beds for the influx of COVID-19 patients. Dania Maxwell / Los Angeles Times/TNS

LOS ANGELES — Conditions at Los Angeles County hospitals are worsening by the day, forcing officials to take increasingly desperate measures to prevent the health care system from crumbling under a crush of COVID-19 patients.

Methodist Hospital of Southern California has taken the grim step of convening a triage team that will “make the difficult, but necessary decisions about allocating limited resources” to critically ill patients “based on the best medical information available,” officials said in a statement.

Supplies of vital equipment, including ventilators, are tight, and there is limited availability of sufficiently staffed intensive care unit beds and healthy hospital workers, the Arcadia-based facility wrote in a public message to patients and their families.

“If a patient becomes extremely ill and very unlikely to survive their illness, even with life-saving treatment, then certain resources currently limited in availability — such as ICU care or a ventilator — may be allocated to another patient who is more likely to survive,” that message states. “If a ventilator or ICU care is not offered or is stopped, the patient has the right to ask their doctor for further detail regarding this decision, and will receive everything needed to ensure that they are free of pain or discomfort.”

Officials have long sounded the alarm that such a bleak possibility was at risk of becoming reality, as the relentless COVID-19 wave has pushed hospitals, and health care workers, to their breaking point.

State officials have already asked hospitals to draw up plans for crisis standards of care, which, in the worst-case scenario, would force certain supplies, therapies and staff to be rationed.

When it comes to deciding who is eligible for ICU admission or should have access to a ventilator, patients who are more likely to survive with such care will receive priority.

A hospital-appointed triage officer is expected to make decisions to benefit populations of patients, “even though these decisions may not necessarily be best for some individual patients,” according to a state memo issued in June.

“Importantly, the status of all critically ill patients is re-evaluated daily by our triage team in order to ensure best possible use of limited resources,” according to the hospital’s letter. “In other words, if an ICU bed or ventilator is not available at first, such resources could become available to the patient at a later date.”

In the face of the most recent surge, the newly appointed state public health officer and director of the California Department of Public Health, Dr. Tomas Aragon, issued a sobering new order that forces the postponement of all but the most essential and life-saving surgeries in wide swaths of Southern California and the San Joaquin Valley.

The kinds of surgeries that will be postponed include non-urgent spine surgeries and carpal tunnel release, while necessary heart surgeries and serious cancer removal will not be affected. The counties affected by the order include Imperial, Los Angeles, Orange, Riverside, San Bernardino, San Diego, Fresno, Kern, Kings, Madera, Merced, San Benito, San Joaquin and Stanislaus.

The situation is so bad in those regions that a plea was sent for additional staffing through California’s mutual aid system.

Some paramedics in the Bay Area are being sent to the southern half of the state to help. Two paramedics from the Mountain View Fire Department in Santa Clara County have been dispatched to hospitals in Bakersfield and L.A. County.

What does crisis standards of care mean?

The surgery order portends a time when some hospitals become so overwhelmed they’re forced to declare to state and local public health departments they are operating under crisis standards of care.

When such a declaration is made, under the new state order, nearby hospitals will be required to accept transfer patients. Government officials are to “take all measures to ensure balanced distribution of patients across the hospital system.”

A hospital operating under crisis standards of care essentially means that it is so overwhelmed that it’s unable to provide necessary emergency and critical care to everyone who needs it. Under this standard, resources and staff are so scarce that hospitals no longer can provide the best care for every individual.

So instead of making decisions in the best interest of every patient, hospitals are forced to focus limited staff and resources on saving the most lives possible — even if that means refraining from giving the best care to some people.

According to the June state memo, in a situation when there is a severe shortage of medical resources and a patient has a poor immediate survival prognosis, health care providers may need to decide to give palliative care aimed at providing relief from pain as patients die, rather than improving their prognosis.

Though it has convened a triage team, it was not immediately clear whether Methodist Hospital has made such an official declaration.

Aragon said the order to postpone all but the most life-saving surgeries is needed to help clear hospital space for the sickest COVID-19 patients. It is not an ideal solution, but officials said they have no choice.

“If this increase of COVID-19 patients continues, hospitals may be unable to provide necessary emergency and critical care to Californians,” Aragon wrote. “If hospitals lose the capacity to care for seriously ill COVID-19 cases, those highly infectious COVID-19 patients will be pushed into the general community, which will further increase community transmission.”

Many hospitals had already decided on their own to postpone surgeries. Last week, officials with L.A. County’s four publicly operated hospitals said the majority of nonessential surgeries had been postponed; Kaiser Permanente is also postponing non-urgent and elective surgeries and procedures at its facilities throughout California.

One 44-year-old patient had his kidney transplant surgery scheduled at Cedars-Sinai Medical Center for Jan. 15 postponed because no ICU beds were available.

The pandemic’s death toll continues to climb. A Los Angeles Times count of local health jurisdictions found that 503 COVID-19 deaths were reported Tuesday across California, the second-highest single-day death toll tallied, eclipsed only by the total on Dec. 31, when 575 deaths were reported. California is now averaging 362 reported deaths a day over the past week, the highest on record.

Since Christmas, at least 1,784 deaths have been recorded in L.A. County. One in 6 deaths of the entire 10-month pandemic have been reported in the last 11 days.

The large death toll may be influenced by a backlog being reported out following the holidays.

COVID-19 is by far the most common problem in intensive care units across L.A. County. As of Monday, COVID-19 patients took up 79% of the available beds in L.A. County’s ICUs; that’s a dramatic worsening compared to Dec. 1, when COVID patients took up only 20% of those beds.