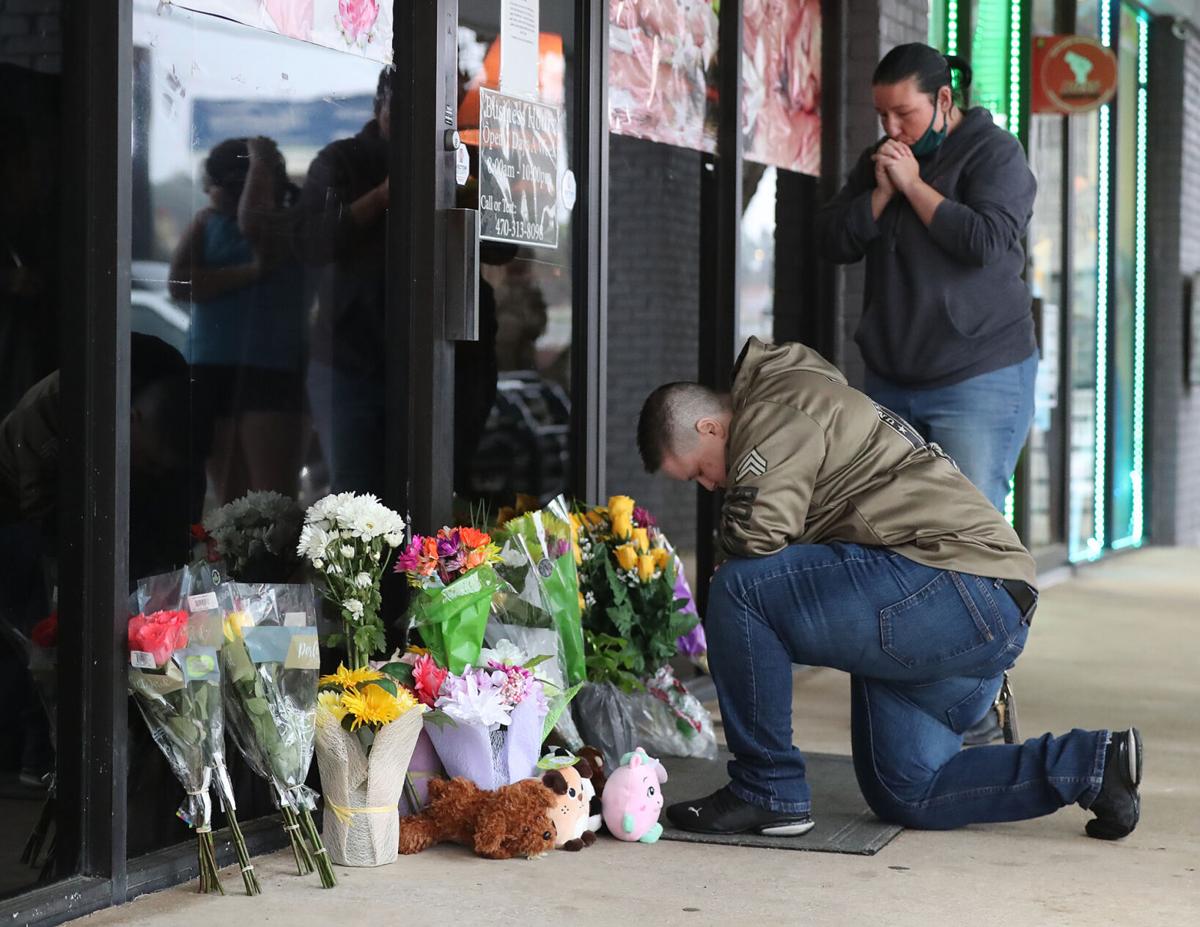 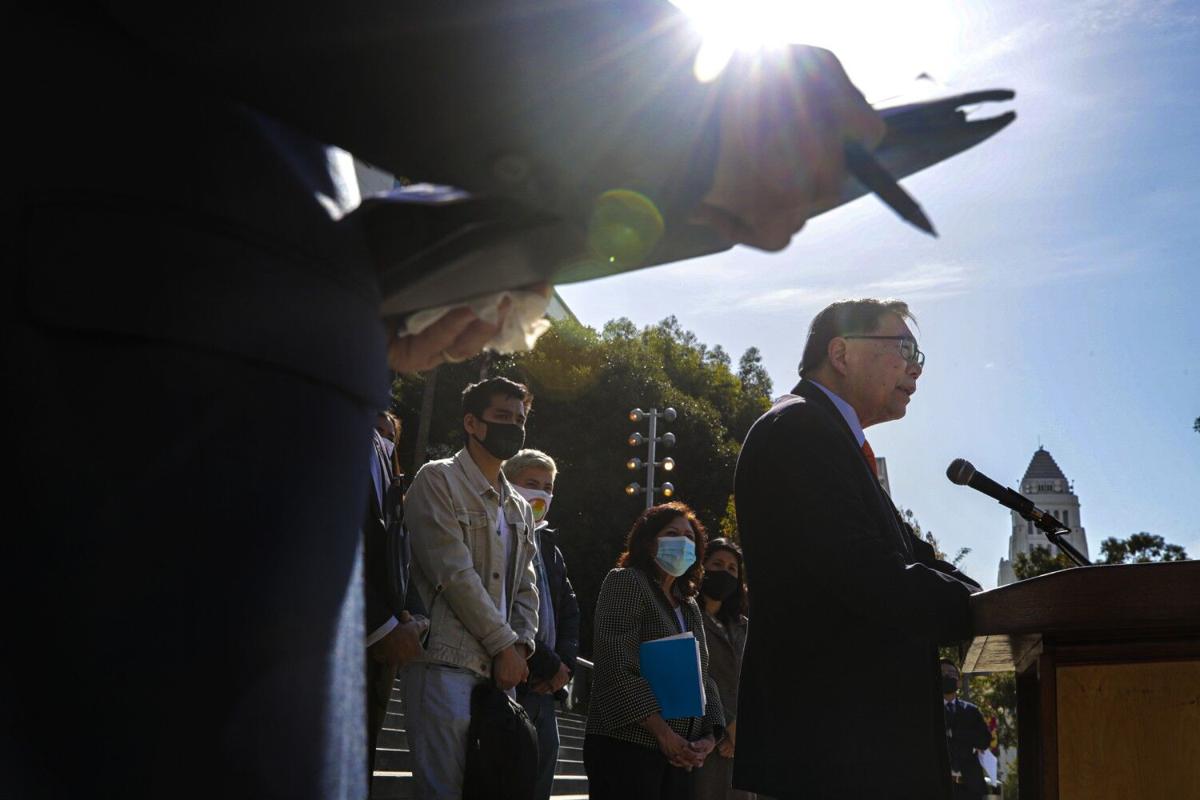 Stewart Kwoh, President Emeritus of Asian Americans Advancing Justice LA, speaks against the hate and recent violence against Asian Americans at a rally held on the steps of County Hall of Administration on March 17 in Los Angeles. Irfan Khan/Los Angeles Times/TNS 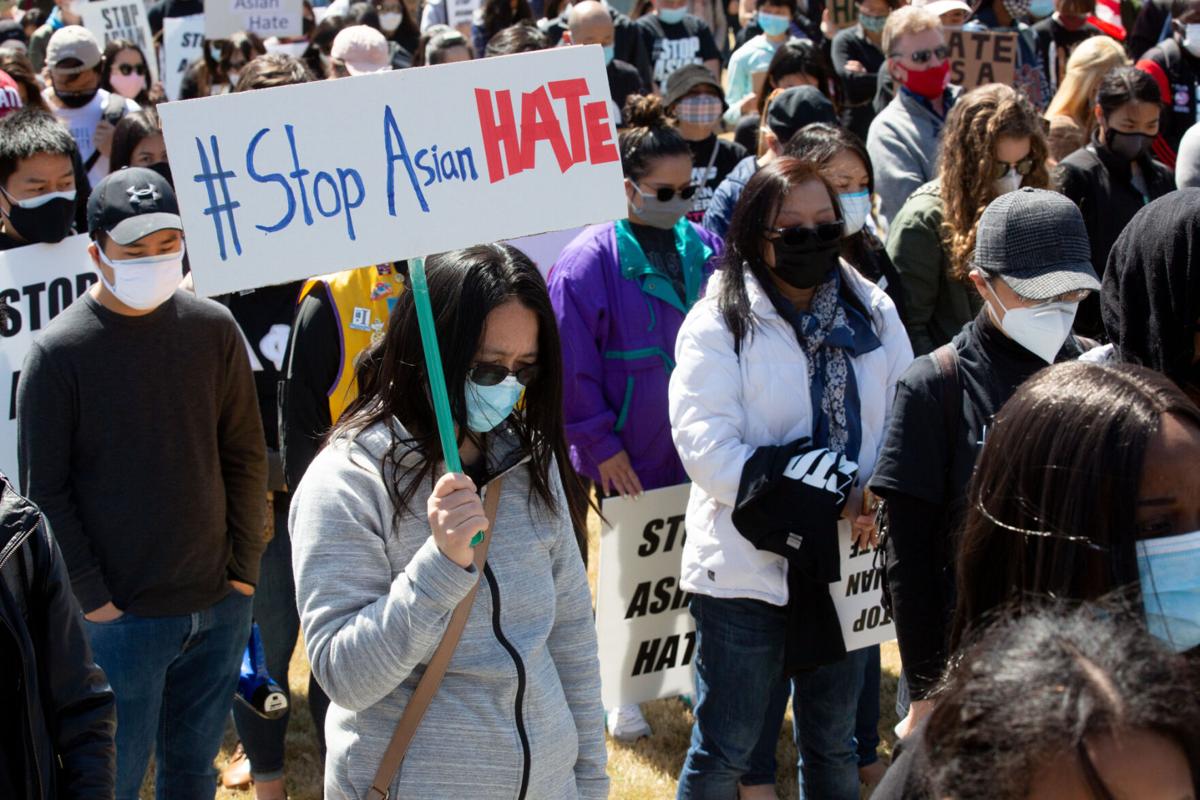 A large crowd gathers for a unity rally at the Liberty Plaza near the Georgia State Capital on March 20. Steve Schaefer/Atlanta Journal-Constitution/TNS

Stewart Kwoh, President Emeritus of Asian Americans Advancing Justice LA, speaks against the hate and recent violence against Asian Americans at a rally held on the steps of County Hall of Administration on March 17 in Los Angeles. Irfan Khan/Los Angeles Times/TNS

A large crowd gathers for a unity rally at the Liberty Plaza near the Georgia State Capital on March 20. Steve Schaefer/Atlanta Journal-Constitution/TNS

CHICAGO — When Summer Chen talks about her life in Chicago, there is a sorrow that tinges her feelings toward the city she calls home.

It is the place she’s found her calling as a Mandarin language teacher, but it also has been the backdrop of a cascade of racist harassment that has worn her down to the point of depression at times: criticism of her Chinese accent in English, an unprompted sexual text from a former co-worker, and anonymous people hacking into a remote learning session and barking racial slurs.

Following last week’s shooting spree at three Atlanta-area spas that left eight dead, including six women of Asian descent, Chen said she wondered more than ever if she was safe in Chicago.

“What came to me is the strong fear for my own identity as an Asian woman,” said Chen, a 35-year-old who lives in Bridgeport. “What if the next victim is me?”

The massacre in Georgia followed a recent swell of reported attacks against Asian Americans and was the culmination of a year of that community feeling scapegoated for the coronavirus pandemic first detected in Wuhan, China. But for Asian American women who spoke to the Chicago Tribune, the killings last week were all the more painful because the violence reminded them of their own encounters with racism and misogyny.

That specific breed of harassment has dogged them throughout their lives, they said, and stems from centuries of America’s discriminatory laws and widespread stereotyping of Asian women.

During the first week of the academic year at the Chicago high school where Chen works, which she requested to be unnamed for her privacy, three to four anonymous users logged into her Google classroom. Chen said after she spoke Mandarin, what sounded like a group of teenage boys shouted, “Chinese (expletive)!”

Chen tried to remove them but didn’t know how, so in a panic she exited the room. She soon realized her students were still logged on, so she came back. The voices reemerged, this time using a racist term to mock the language. Then they left.

Chen said the principal was notified and from then on, teachers used a waiting room for unauthorized users. But the culprits have not been caught.

“It’s like a trauma,” Chen said. “The school year, it’s almost over, but I still have that trauma every time I open the link for my remote learning class.”

The menace of attacks against Asian Americans during the coronavirus pandemic has harmed male and female victims; in San Francisco, for example, an 84-year-old Thai man died earlier this year after a man shoved him onto the pavement. But a national coalition of Asian American organizations that collected 3,795 reports on anti-Asian racism from March 2020 to February found almost 70% of them came from Asian women.

The deaths were both chilling and unsurprising to Choimorrow, a 39-year-old Korean American woman who lives in Skokie. The Saturday before St. Patrick’s Day, she took her 6-year-old daughter to downtown Chicago to see the river that had just been dyed green. When she stopped by a coffee shop off Michigan Avenue, a man waited on the other side of the door.

Choimorrow said she and the man both stood still until she opened the door. The man barged out and yelled, “Chinese (expletive). That’s right, you hold the d—- door for me. Don’t expect me to hold the door for you.”

“Every time it happens, all of the experiences you’ve had in the past is sort of like, you sort of get re-traumatized,” Choimorrow said. “It’s the reoccurrence of these things that happen that really is what causes us the most harm.”

Exactly a year before the Georgia shootings, Archer Heights resident Sara Zhang winced when then-President Donald Trump first tweeted a racist slur for the coronavirus, sparking an uproar among Asian American leaders who feared it would expose their communities to violence. But anti-Asian racism neither began nor ended with the Trump era, she said.

Violence against Asians and Asian women in particular “didn’t just suddenly come out of nowhere” as a result of Trump using racist slurs for the virus, said Zhang, an 18-year-old freshman at the University of Southern California. “It’s something that’s historically rooted from the brutality of white supremacy and American imperialism.”

Scholars of Asian American history trace the hypersexualization of Asian women to 1875, when the U.S. government passed the Page Act that effectively banned Chinese women from entering the country under the guise of prohibiting entry for what it described as “immoral” immigrants such as sex workers. It preceded the 1882 Chinese Exclusion Act that included Chinese men. During the 20th century, American military occupation of Asian countries such as South Korea and Vietnam drove a sex industry as well as the fetishization of Asian women as sexual objects.

Zhang said she feels the weight of those stereotypes envelop her whenever she steps outside. Twice, she was groped by men when she was a teenager, once at the CTA’s Roosevelt Red Line stop and another time near her high school, Payton College Prep.

“I am an Asian woman, and I have to be aware of who I’m around,” Zhang said. “Whenever I go into these public spaces, I feel uncomfortable.”

Over recent decades, Asian Americans have become associated with a new stereotype: the successful immigrant. As a group, they have the highest median income and education levels among racial groups, according to the Pew Research Center. But the label “Asian American” is exceedingly diverse — an umbrella term for more than two dozen nationalities — and also encompasses the U.S. racial group with the highest income inequality.

The triumph of some Asian Americans should not be attributed to an innate work ethic, scholars Min Zhou and Jennifer Lee argue in their 2017 paper “Understanding the Asian American Achievement Paradox.” They say that since the 1965 immigration act allowed more Asians to come to the U.S., a “hyper-selectivity” took root as immigrants from countries such as China were more likely to have bachelor’s degrees compared with the rest of their originating country’s population.

Lan Ho, a 30-year-old Vietnamese American woman who lives in the West Loop, said the elevation of prosperous Asian Americans, also known as the “model minority” myth, has masked the larger community’s struggles and led to pushback last week to the notion that the Georgia shootings should be considered a hate crime. Authorities have said they are still investigating the cause.

“America tells us that we’re not allowed to call it racism because we are essentially deemed the main beneficiaries of the American Dream,” said Ho, co-founder of the Vietnamese coffee startup Fat Miilk. “‘You guys are out here being doctors and engineers and taking all of these really prestigious roles.’ ... We say no to that.”

The day after the shooting spree, Cherokee County Sheriff Frank Reynolds said early indicators showed the attacks “may not be” racially motivated. Capt. Jay Baker elaborated that Robert Aaron Long, a 21-year-old white man who was charged with murder in the eight deaths, told police he was provoked by a “sex addiction.” Baker was later removed as the spokesman for the case after he also said Long had “a really bad day” and after an old Facebook post of Baker’s surfaced with him promoting racist language tying China to the coronavirus.

Grace Pai, organizing director of the Chicago chapter of Asian Americans Advancing Justice, said the idea that the attacks were not racially motivated is “ridiculous.”

“Anybody can look at what he did: He targeted three Asian businesses and killed mostly Asian American women,” Pai said about the alleged gunman. “How is that not racially motivated?”

Pai said the news of the Georgia shootings felt like a familiar nightmare come true. Fearing a wave of violence, Asian Americans Advancing Justice in Chicago had begun bystander intervention trainings last October, educating about 1,000 people as of last week on how to step in when they see anti-Asian harassment or discrimination.

Pai’s organization also supports a proposal before the Illinois General Assembly that would require public schools to teach Asian American history. The legislation cleared a House committee the day after the mass shooting and now heads to the full chamber for further consideration.

“It’s important to recognize Asian Americans in all their dimensions and afford us our full humanity rather than thinking of us only in terms of those success stories or the invisible, cheap labor that is also another prevalent view of our community,” said state Rep. Theresa Mah, a Chicago Democrat co-sponsoring the proposal and whose 2nd House District includes Chicago’s Chinatown.

This past Saturday, Chen, the Mandarin teacher from Bridgeport, stepped onto a bench at the foot of the Illinois Centennial Monument in Logan Square and peered out into the sea of hundreds of faces during a “Stop Asian Hate” rally. One of them was her 8-year-old son’s.

Her stories of racism and misogyny, bottled up for years, flowed from her as she gripped the megaphone. But so did something else: pride in an identity under attack.

“I am proud to be an Asian woman,” Chen said in an interview later that day. “The reason I was there today is not only to speak up for myself as an Asian woman ... it’s for my own children in the future. I don’t want them to live in fear.”