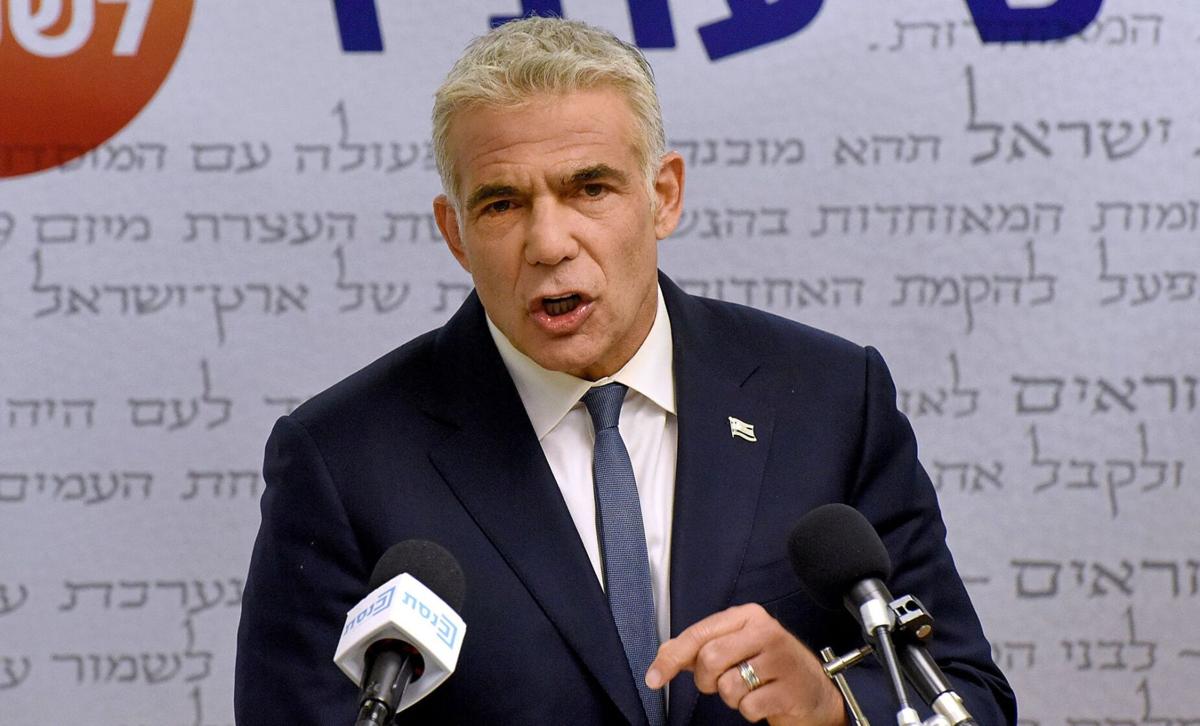 Israel’s centrist opposition leader Yair Lapid delivers a statement to the press at the Knesset (Israeli parliament) in Jerusalem on May 31. Lapid says he has formed a coalition government that will remove Prime Minister Benjamin Netanyahu from leadership.Debbie Hill/POOL/AFP/Getty Images/TNS 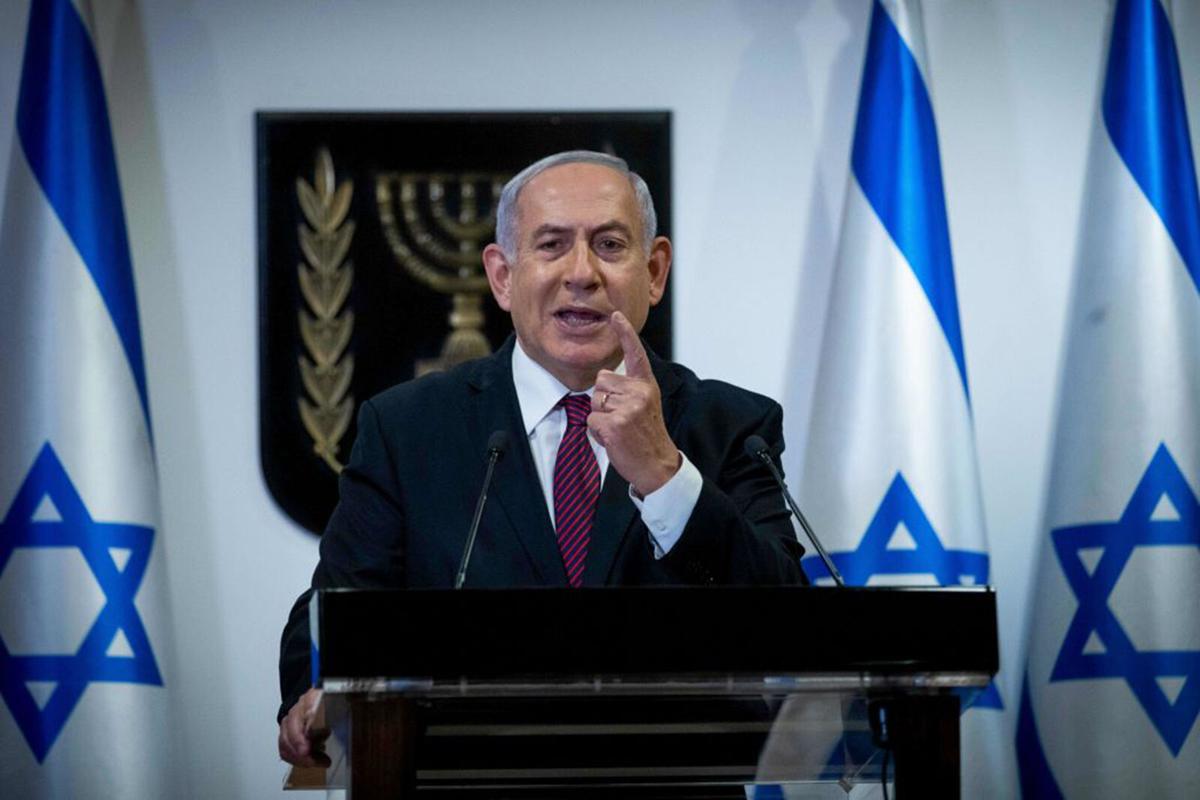 Israel’s centrist opposition leader Yair Lapid delivers a statement to the press at the Knesset (Israeli parliament) in Jerusalem on May 31. Lapid says he has formed a coalition government that will remove Prime Minister Benjamin Netanyahu from leadership.Debbie Hill/POOL/AFP/Getty Images/TNS

The news amounted to a political earthquake in Israel, where the 71-year-old prime minister has been a commanding political presence for a generation, but the new government will not be sworn in until later this month, which could mean a tense interlude for the country.

Critics from across the political spectrum have expressed fears that Netanyahu, who has shown increasingly authoritarian tendencies in recent years, could seek to somehow derail what would normally be a ceremonial handover of power to his successor.

Secular centrist politician Yair Lapid, who heads a so-called “change” coalition made up of disparate parties united mainly in their desire to topple Netanyahu, made his announcement less than an hour before a midnight deadline for finalizing the makeup of the planned new government.

The new governing coalition represents a historic first for the country: It includes a party representing Palestinian citizens of Israel. As the deadline neared, a small Islamist party called the United Arab List agreed to participate, the party’s leader said.

Lapid, 57, a former television host, leads the largest party in the grouping, but he is not slated to succeed Netanyahu. Instead, in an unusual arrangement, Naftali Bennett, 49, who heads a small hard-line party that played a king-making role in forming the coalition, is to serve as the country’s leader for the next two years, with Lapid then following suit.

Wednesday’s political drama came only a dozen days after a cease-fire ended fighting between Israel and the militant group Hamas. Initially, the 11-day bout of fighting, which left more than 250 Palestinians dead and killed 12 people on the Israeli side, appeared to bolster Netanyahu’s political prospects, narrowing the window during which Lapid could work to patch together a coalition.

As Netanyahu has been fighting for his political life, politicians who normally keep a wary distance from one another have expressed common fears that he is wielding dangerously anti-democratic tools in a bid to cling to power. Some former allies who have now turned against the prime minister have warned of the possibility of violence by Netanyahu’s most ardent supporters.

Avigdor Lieberman, a former defense minister under Netanyahu, said Tuesday in a speech to a bar association gathering in the southern city of Eilat that he could envision a turn of events akin to the Jan. 6 insurrection at the U.S. Capitol by supporters of then-President Donald Trump.

Several of Netanyahu’s foes — including a few erstwhile allies on the political right and his more traditional opponents on the political left — were placed under enhanced protection from the Shin Bet domestic security service this week after die-hard backers of the prime minister unleashed a torrent of threats and invective against them on social media, picketing outside the homes of some.

As the coalition’s outlines emerged, Netanyahu himself employed harsh language against its members, particularly some past proteges. On Sunday, he accused Bennett of carrying out the “fraud of the century” by entering into a prospective government with dovish parties that support the creation of a Palestinian state alongside Israel.

Despite the breakthrough accord by his opponents, Netanyahu is unlikely to fade from political view, said analyst Shalom Lipner, a former civil servant who advised Israeli prime ministers for more than two decades.

“It’s fairly certain that he’ll continue to harangue his opponents as ballot thieves and traitors to the conservative cause, hoping to rally discontent around his flag and to mount another challenge for the premiership,” said Lipner, a nonresident senior fellow at the Atlantic Council.

The signed coalition agreement is considered the definitive proclamation of a new Israeli government, but due to the Knesset’s summer recess, a formal installation is not expected before June 14, and Netanyahu was to remain in office as caretaker prime minister until then.

Although Netanyahu’s prospects of staving off the new government’s inauguration are considered slim, political survival is his signature trait, and longtime observers counseled caution. Anshel Pfeffer, an Israeli journalist who has written a biography of Netanyahu, said detractors shouldn’t write him off too soon.

“Hold his obits until the actual swearing-in, if and when it happens,” Pfeffer tweeted Monday as the coalition talks moved closer to fruition. Only once before, in 1990, has an agreed-upon Israeli coalition been scrapped as it’s been about to be sworn in.

The final days and hours of coalition negotiations were contentious but made steady progress, according to Israeli media reports. In the end, Lapid informed Israeli President Reuven Rivlin, using carefully formulaic Hebrew phrasing, that he had formed a coalition consisting of at least 61 seats in the Knesset.

The corruption case hanging over Netanyahu has been a crucial factor in the country’s two years of political paralysis. He has used his post, which under law he was allowed to retain even while fighting the charges in court, as a forum from which to hurl accusations at the judiciary, investigators and prosecutors.

One reason Netanyahu has found it difficult to attract his traditional allies in a coalition partnership is that he has a habit of not keeping political promises. Last year, he formed a so-called emergency government with his then-main rival, former army chief Benny Gantz.

But the government collapsed in December without Gantz getting his promised turn as leader.

If the newly unveiled coalition does take power as scheduled, analysts said that, with such a disparate grouping of parties, it would be difficult to make progress on contentious issues including dealings with the Palestinians, or Jewish settlements in the West Bank. Instead, domestic concerns are expected to be front and center: the economy, education and health care.

Leading up to the late-night tumult, it was a busy political day: Earlier Wednesday, political veteran Isaac Herzog was named to the largely ceremonial role of Israel’s president, which he will take over next month.

Herzog, 60, a former head of Israel’s Labor party and leader of the political opposition to Netanyahu, was chosen Tuesday by an anonymous vote by members of the Knesset.

Although the president plays little part in the rough and tumble of Israeli politics, Herzog’s powers do touch on a matter of potential interest to the prime minister: the authority to grant pardons.