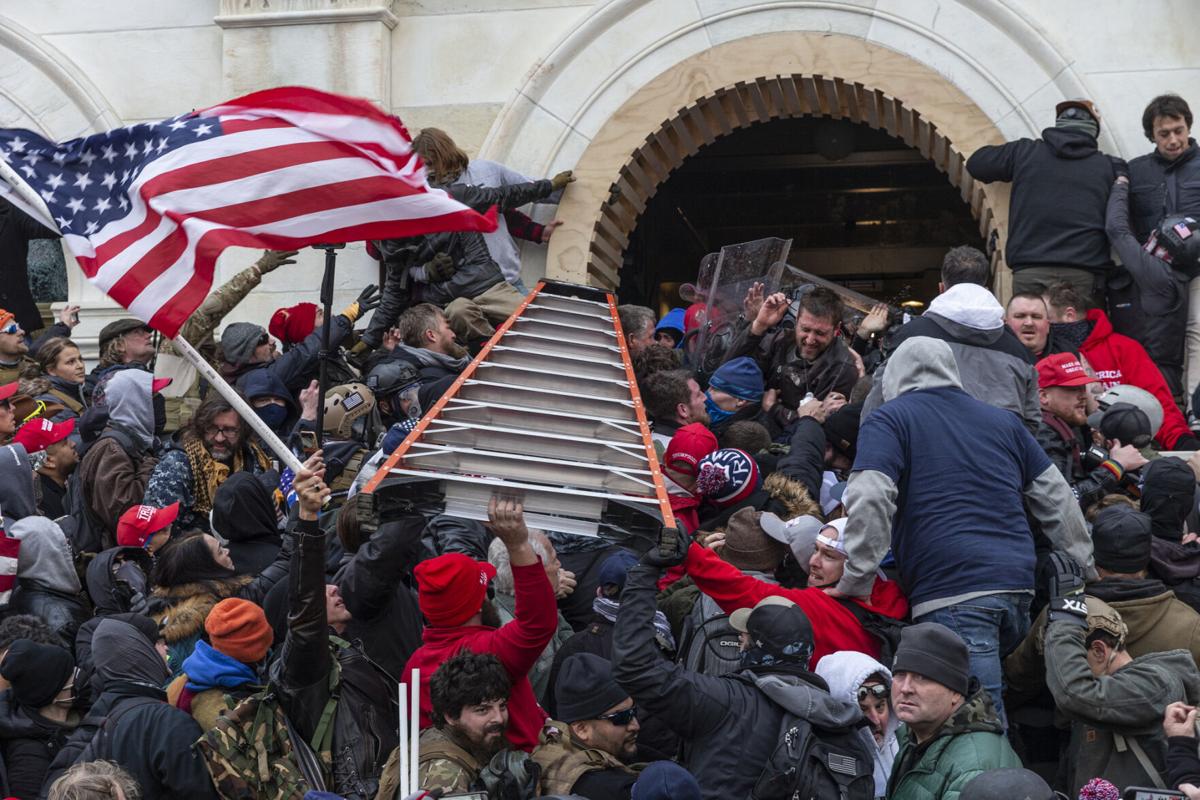 Rioters clash with police during the Jan. 6 insurrection at the U.S. Capitol in Washington, D.C. Lev Radin/Pacific Press via ZUMA Wire/TNS 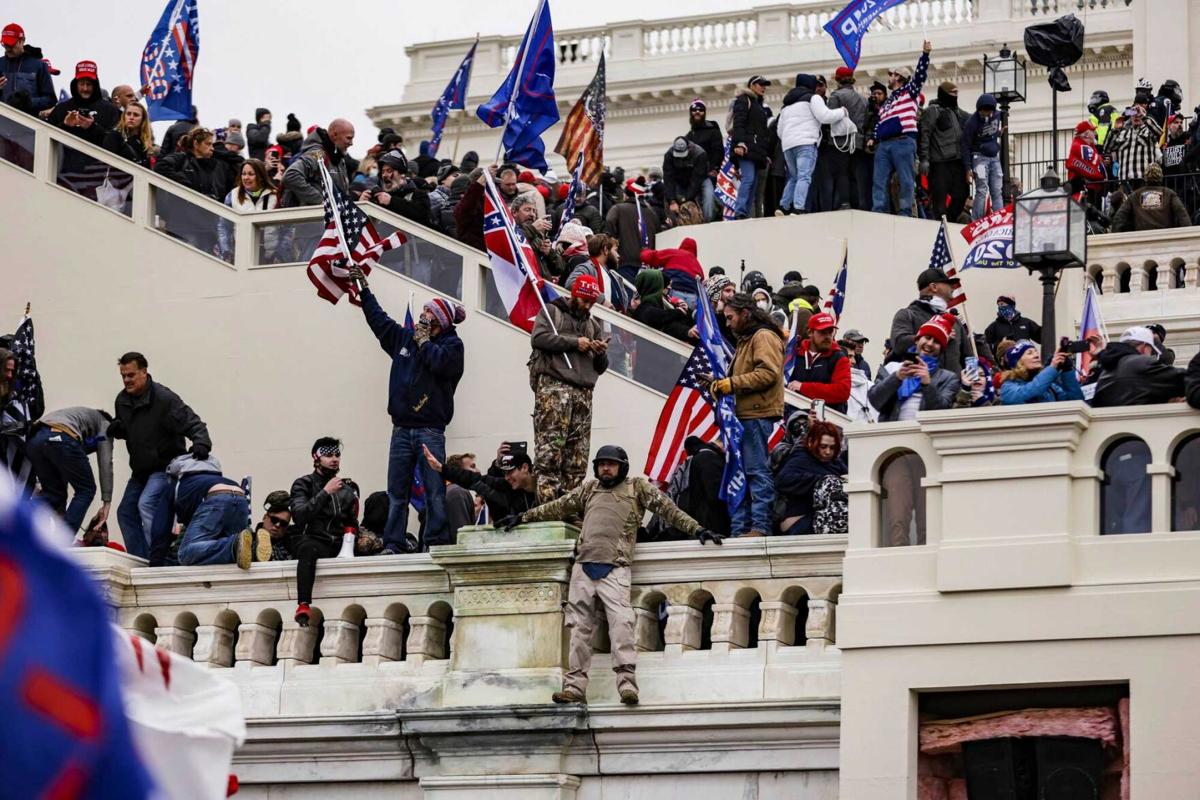 Rioters clash with police during the Jan. 6 insurrection at the U.S. Capitol in Washington, D.C. Lev Radin/Pacific Press via ZUMA Wire/TNS

Cellphone records obtained in the federal investigation of the deadly insurrection at the U.S. Capitol show some members of Congress may have communicated directly with rioters before and during the mayhem, according to reports.

Authorities have collected data from cellphone towers and have found evidence that lawmakers corresponded with supporters of former President Donald Trump who stormed Congress on Jan. 6 in an attempt to overthrow final confirmation of Joe Biden’s election win.

The same data also revealed that someone inside the Trump White House was in communication with a member of the far-right extremist group Proud Boys in the days just before the riot, according to the New York Times, which cited the FBI investigation. Authorities have not revealed the names of those who participated in the phone call nor has it been determined what was discussed.

Meanwhile, law enforcement officials have not directly accused any lawmakers of wrongdoing.

The cellphone data in question was gathered from the electronic devices of suspects who have been arrested in the weeks following the riot, but further investigation is necessary to determine whether they were aided or abetted by persons on the inside.

Although no lawmakers have been implicated, suspicions have emerged around a close friend of freshman Rep. Marjorie Taylor Greene of Georgia who admitted he was among the angry crowd that stormed the building, reports said.

Anthony Aguero recorded himself during the attack and posted the video to Instagram.

CNN’s KFile, known for taking a deeper dive into the social media histories of lawmakers, found instances of Aguero calling Greene “one of my closest friends.”

Authorities have said search warrants would be sought if proof is found that public officials offered assistance to the rioters in any capacity.

Democratic Sen. Sheldon Whitehouse of Rhode Island has called on the Senate Ethics Committee to supplement the FBI investigation, saying he wanted to make sure this isn’t an investigation that is limited to the individuals who assaulted and entered the Capitol on Jan. 6, alluding to the “potential culpability by members of Congress,” CNN reported.

The FBI has also announced the creation of a cellphone “exclusion list” that differentiates the mobile devices of legislators from those that were not authorized to be in the Capitol on the day of the riot.

Last week, during a Senate Judiciary Committee hearing into Jan. 6 security failures, Republican Sens. Mike Lee of Utah and Josh Hawley of Missouri suggested the bureau might have overstepped its authority by obtaining cellphone data as part of its investigation, according to CNN.

The Jan. 6 riot, which left five dead, was sparked by months of false claims by Trump and others in the GOP who spread the notion that widespread voter fraud got Biden elected and cheated the incumbent out of a second term.

Hawley, who was photographed on the day of the riot greeting Trump supporters with a raised fist outside the Capitol, objected to the Electoral College results in Pennsylvania and voted to undo millions of votes cast for Biden to presumably deliver a last-minute victory to Trump.

In the days immediately following the uprising, some Congress members expressed suspicions about whether some of their colleagues had played a direct role in planning the attack.

Staff for Massachusetts Rep. Ayanna Pressley reported that emergency panic buttons were inexplicably removed from her office that day, presumably so help couldn’t be called — although no proof of a conspiracy has been uncovered.

An investigation has also been launched into suspected tours that were given to Trump supporters at the Capitol the day before the insurrection, Ohio Democrat Tim Ryan announced, but so far the Justice Department has declined to name anyone involved.

The questions about the tours were first raised when Rep. Mikie Sherrill, D-N.J., claimed during a Facebook Live broadcast that she observed some Republicans in Congress giving the groups “reconnaissance” of the Capitol.

Sherrill joined numerous other lawmakers who called the tours highly unusual because the Capitol had been closed to the public throughout the pandemic.

“The visitors encountered by some of the Members of Congress on this letter appeared to be associated with the rally at the White House the following day,” their statement read.

Further, Sherrill wrote: “Members of the group that attacked the Capitol seemed to have an unusually detailed knowledge of the layout of the Capitol Complex ...”

Sherrill’s allegations came the same night that New York Rep. Alexandria Ocasio-Cortez addressed constituents on an Instagram Live video expressing her fear that some of her Republican colleagues would have disclosed her location during the insurrection Jan. 6.

“I myself did not even feel safe going to that extraction point, because there were QAnon and white supremacist sympathizers and frankly white supremacist members of Congress in that extraction point, who I know and who I had felt would disclose my location and allow me to, who would create opportunities to allow me to be hurt, kidnapped, etc.,” she said.

Rep. Lauren Boebert, an outspoken Trump loyalist, was forced to deny allegations that she was involved in any plot or conspiracy amid claims that she live-tweeted House Speaker Nancy Pelosi’s movements as rioters stormed the building.

Fellow lawmakers have called for Boebert to resign.

“America is depending on all of us today,” she tweeted about an hour before the rioters arrived on the Capitol steps. “This is something I don’t take lightly. I will fight with everything I have to ensure the fairness of the election.”

As the siege began Jan. 6, the Colorado Republican tweeted that representatives “were locked in the House Chambers.”

A minute later, she tweeted: “Speaker has been removed from the chambers.”

Simultaneously, she was on the floor addressing Pelosi directly, telling the speaker she had “constituents outside this building right now,” reports said.

Rep. Eric Swalwell, a California Democrat, went on Twitter to call out Boebert for the tweets.

“I hope we understand if there was an inside job — whether it was members or staff or anyone working at the Capitol who helped these attackers better navigate the Capitol — that is going to be investigated,” Swalwell said at the time.

But Boebert, who objected to Biden’s victory in Arizona and Pennsylvania, dismissed the seriousness of the charges.

“(Democrats) accuse me of live-tweeting the speaker’s presence after she had been safely removed from the Capitol, as if I was revealing some big secret, when in fact this removal was also being broadcast on TV,” Boebert said, according to the Boston Globe.

The WHY is still out there. One could list the possible reasons for collusion with the boots on the ground rioters but still come up with a benign ending or was it to distract from coronavirus surge. Those involved did it for what reason? Was it to plant the seeds of doubt about the election of 2020 for future documentaries, was it to distract from the effects of the pandemic, did Trump really think he had been cheated and if he did how did he convince so many followers. Were the rioters patriotic Americans concerned about losing their control of American government to swamp dwellers? IMO there is an underlying reason that may or may not ever be uncovered. In the mean time justice must prevail.

Did anyone other than the blind loyal GOPer's think there wasn't inside information on the riot? Lot's more to come out on this..