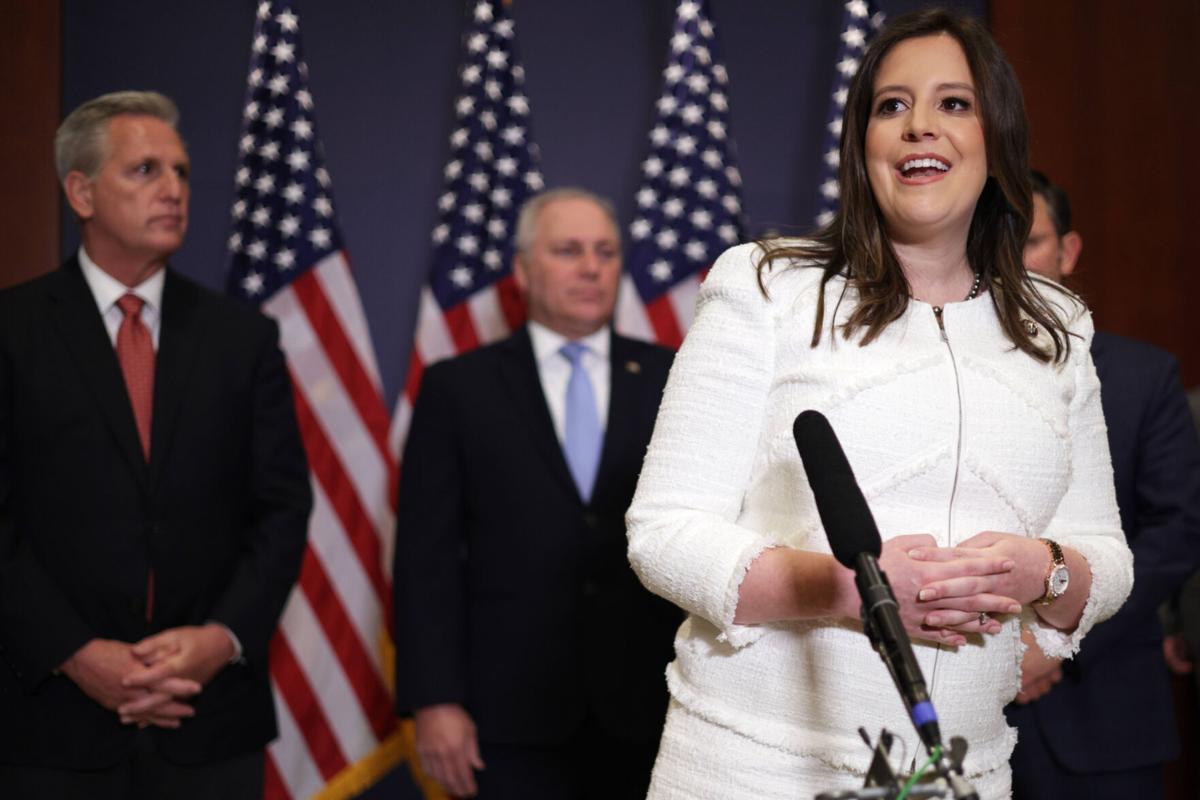 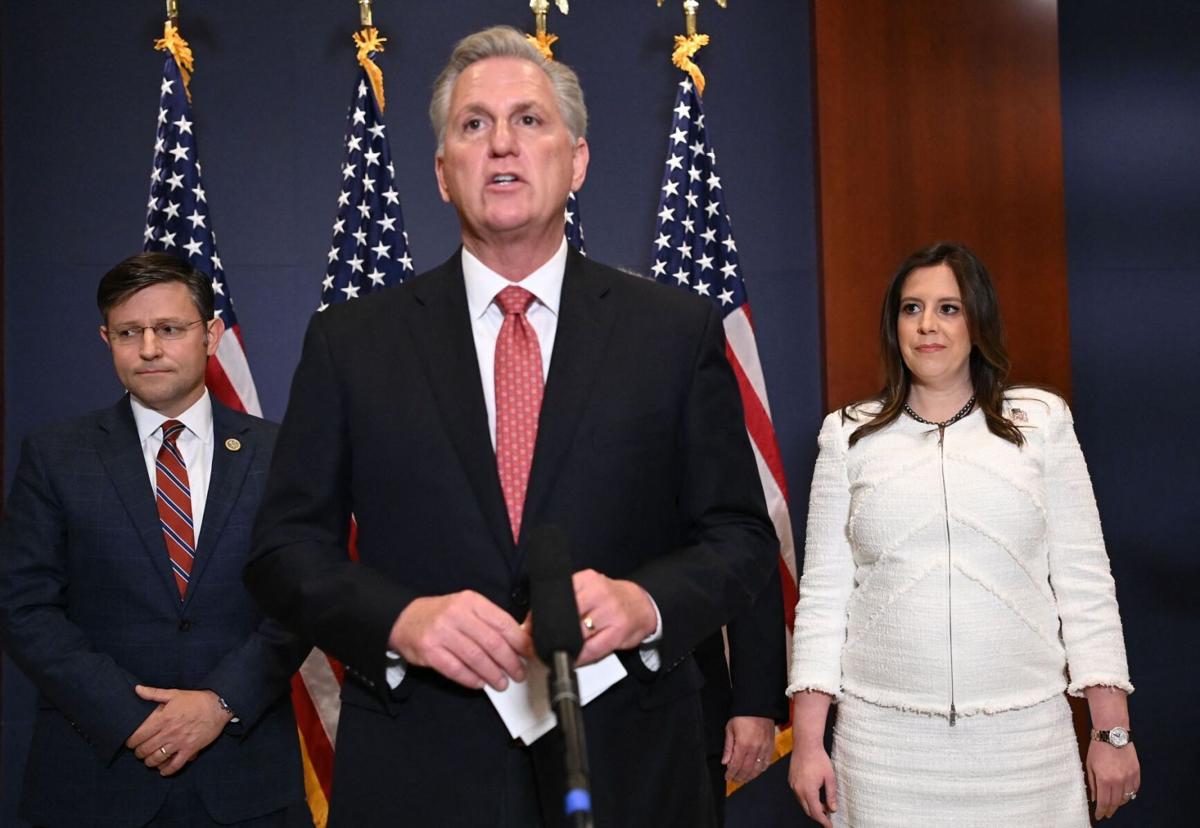 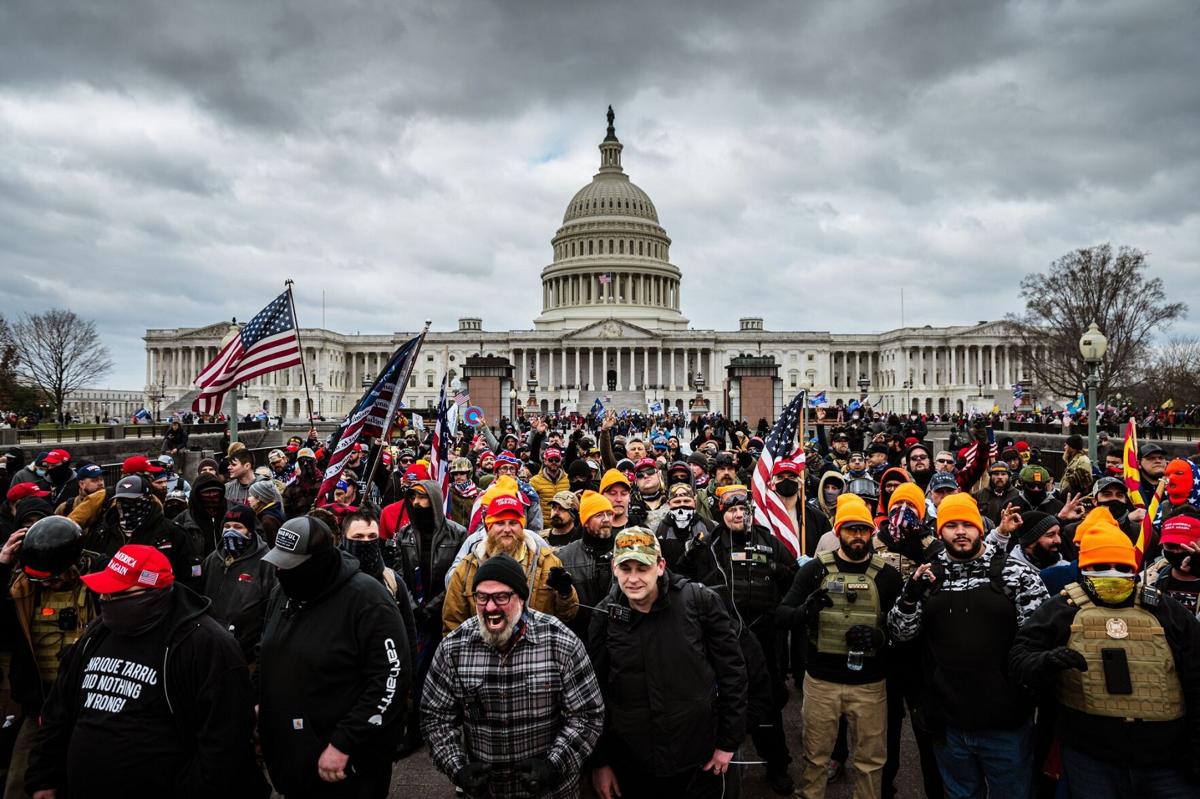 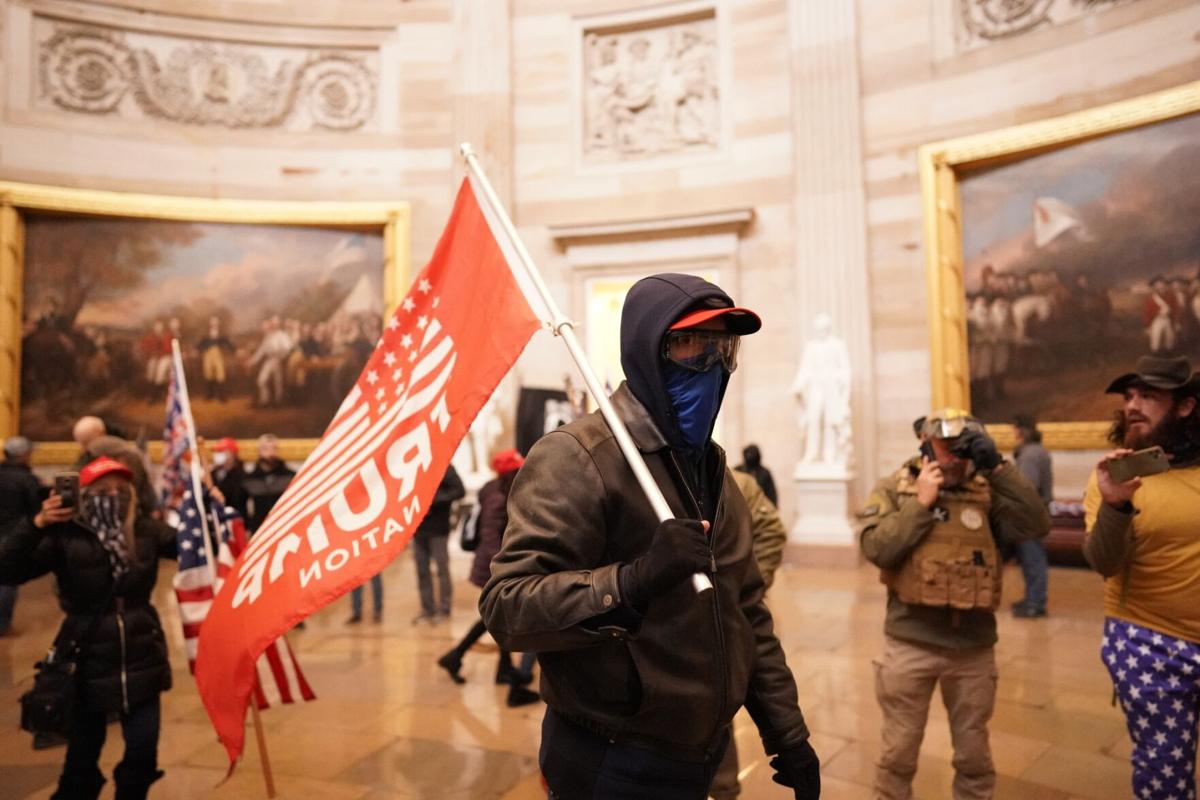 Protesters storm the Capitol and halt a joint session of the 117th Congress on Jan. 6 in Washington, D.C. Kent Nishimura/Los Angeles Times/TNS 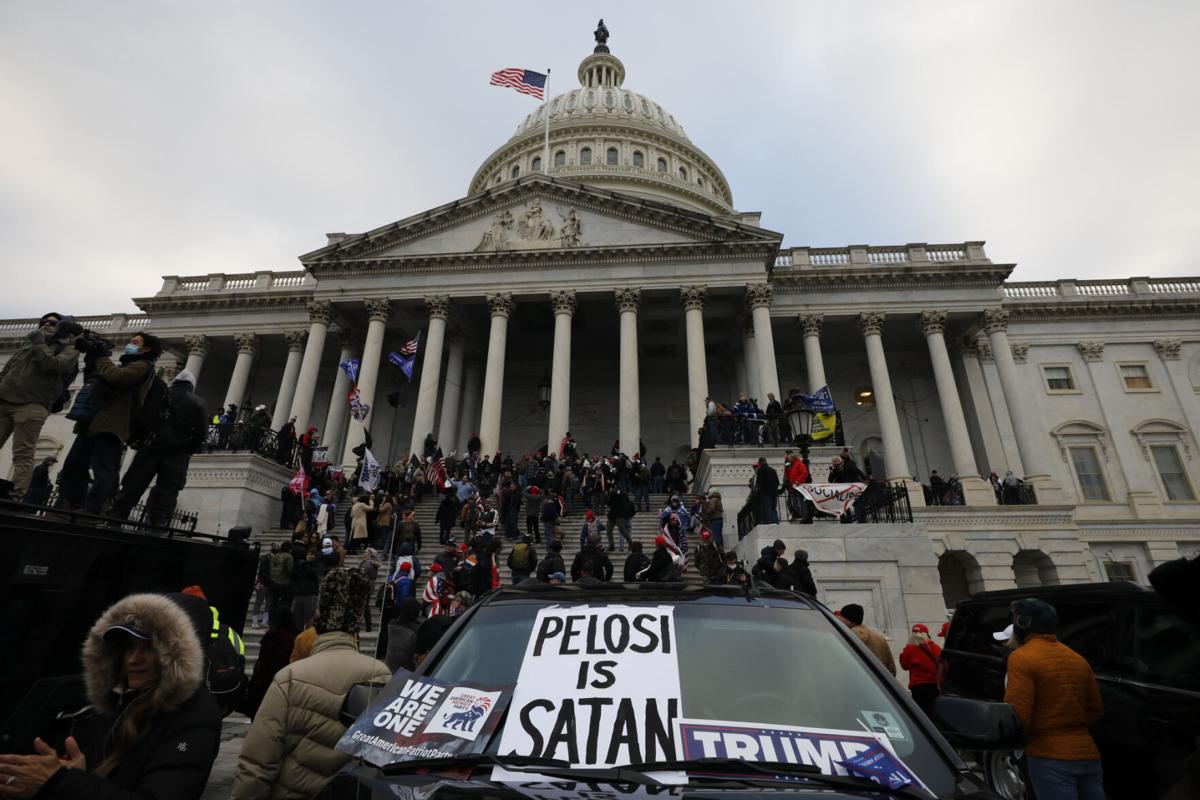 Supporters of President Donald Trump protest on the steps of the U.S. Capitol building on Capitol Hill in Washington, D.C., on Jan. 6. Yuri Gripas/Abaca Press/TNS

Protesters storm the Capitol and halt a joint session of the 117th Congress on Jan. 6 in Washington, D.C. Kent Nishimura/Los Angeles Times/TNS

Supporters of President Donald Trump protest on the steps of the U.S. Capitol building on Capitol Hill in Washington, D.C., on Jan. 6. Yuri Gripas/Abaca Press/TNS

U.S. Rep. Elise Stefanik said Thursday that she voted against the creation of a commission to investigate the Jan. 6 attack at the Capitol because it was too narrow in scope.

“If we are addressing political violence broadly, we need to go back to look at multiple acts that were committed — not just by those on Jan. 6 — but the targeting of Republicans at the congressional baseball practice, where there was a shooting which injured my colleague, (Minority) Whip (Steve) Scalise, and many people almost lost their lives at that event,” she said, referring to the June 14, 2017, shooting by James Hodgkinson.

In addition, Stefanik, R-Schuylerville, said the commission should address the violence from Black Lives Matter and the destruction of federal property.

Stefanik said she was also concerned that language in the bill would have the potential for the commission to interfere with law enforcement agencies’ ability to investigate and prosecute cases stemming from the Capitol insurrection.

Stefanik made her remarks to reporters after an event to celebrate Grant Cottage achieving designation in January as a National Historic Landmark by the National Park Service.

The 43-acre property was where former President Ulysses S. Grant completed his memoirs about six weeks before his death in July 1885.

Stefanik pointed out that numerous agencies are investigating the Capitol attack, and the House has a working group that is making recommendations about how to make sure Capitol Police have the resources they need and that there is adequate sharing of intelligence.

Stefanik also addressed Georgia U.S. Rep. Marjorie Taylor Greene, who has come under fire for likening requirements to show proof of vaccination to Jews being forced to wear a star during Nazi-era Germany. She also has compared House Speaker Nancy Pelosi’s requirement to wear masks on the House floor until everyone is vaccinated to that of Jews being taken to the gas chamber, according to media reports.

“I condemn that comment. That does not represent the House Republicans’ position,” Stefanik said. “Obviously, there’s no comparison to the horrors of the Holocaust. I’ve been very active to make sure we’re increasing education of the next generation of the horrific atrocities that occurred during the Holocaust.”

Stefanik said she has not spoken to President Donald Trump about the news of a grand jury being convened to consider criminal charges relating to his business dealings, but called the investigation “politically targeted.”

She also took a shot at President Joe Biden, who earlier in the day, at an appearance in Cleveland, had held up a card with the names of Republican lawmakers who had voted against the American Rescue Plan stimulus package, but touted its benefits after passage. Stefanik was the third name on the list.

Stefanik said she did not support that bill because it was a very partisan piece of legislation.

Among her priorities for this session are making sure that rural infrastructure, particularly rural broadband, is part the ongoing negotiations over an infrastructure spending package.

Time to start referring to Trump as, “former President” NNY360.

It was not an insurrection. It was a group of goof balls. An insurrection happens when a group of highly trained, armed to the teeth mercenaries stage a takeover of the government. Due to Nancy's incompetence a group of goofballs occupied the capitol for a short time. They were told by Trump to protest peacefully unlike democrats who promote violence with no consequence because they belong to the right side. Biden said he protested when young and found himself in the capitol building. Did he once take part in an insurrection? Or was that one on his numerous lies? The left is just giddy about the grand jury. They are still looking to find a crime. They already have the verdict and the perpetrator. "America, what a country".

Once again, Elise shows excellent judgment. She didn't fall for the hokey, liberal lies about this being an insurrection and the Scalise shooting being an abberation not even worth discussing. Elise is a firewall against the loons. Thank you for your strength and judgment, Congresswoman.

The Middle Class, The Dan, Mike’s, Karen’s will like this.

she is simply awful. what a pathetic, obviously fake excuse to vote against the commission. she knows it's a fake excuse and she rubs it in everyone's face anyway.

The Republican political strategy for 2022 seems to be to not only memory hole the attack of January 6th but also Trump himself. Despite killing the commission, every person who goes before a judge or jury is going to say they committed their crimes at the behest of Trump.

If they want him to fade they have to, en masse, admit that he lost the election. Take the short term pain from confronting that fact. They can’t because of cowardice both political and personal. Trump’s Followers are dedicated to him because Congressional Republicans have allowed it to happen over the last 5 years.

How many different ways can this woman say that it's really her career that matters to her?

Biden’s bill has as little to do with genuine infrastructure ...

Interesting Elise will fly impromptu to Georgia chasing down bogus votes...but won't look into the MAGA mob storming the Capitol...