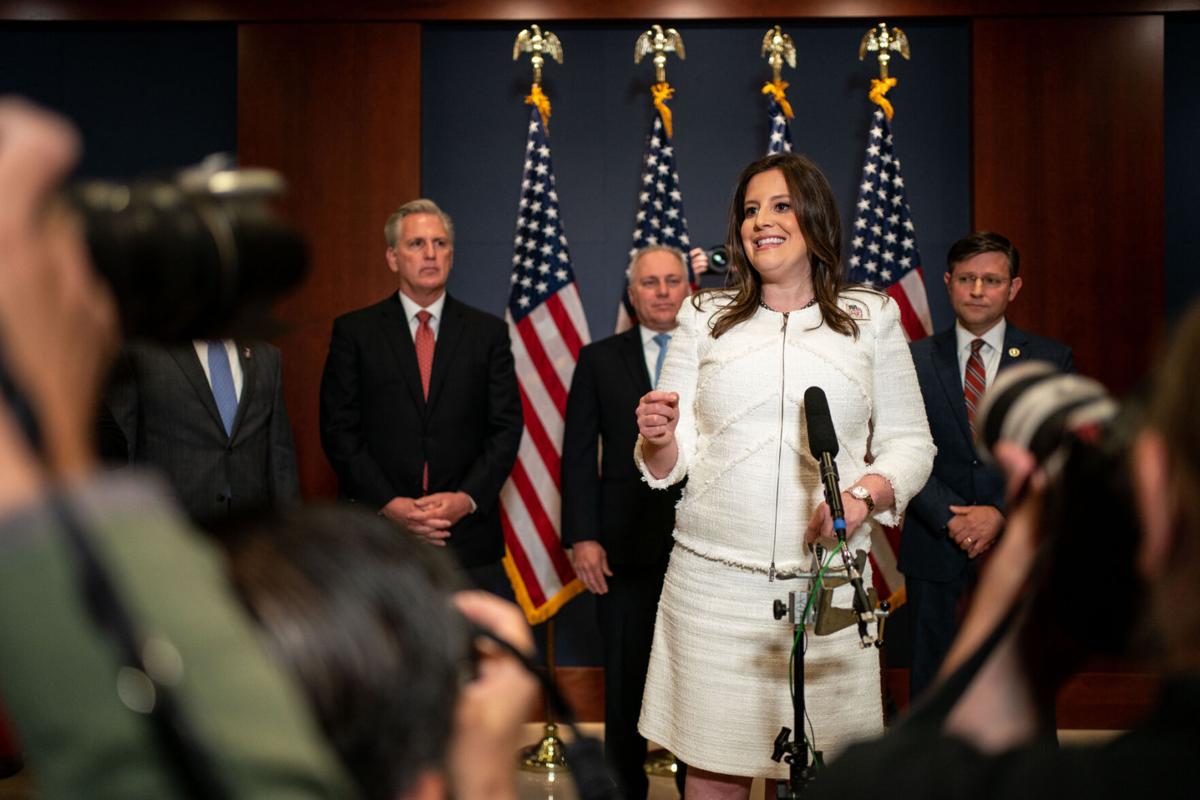 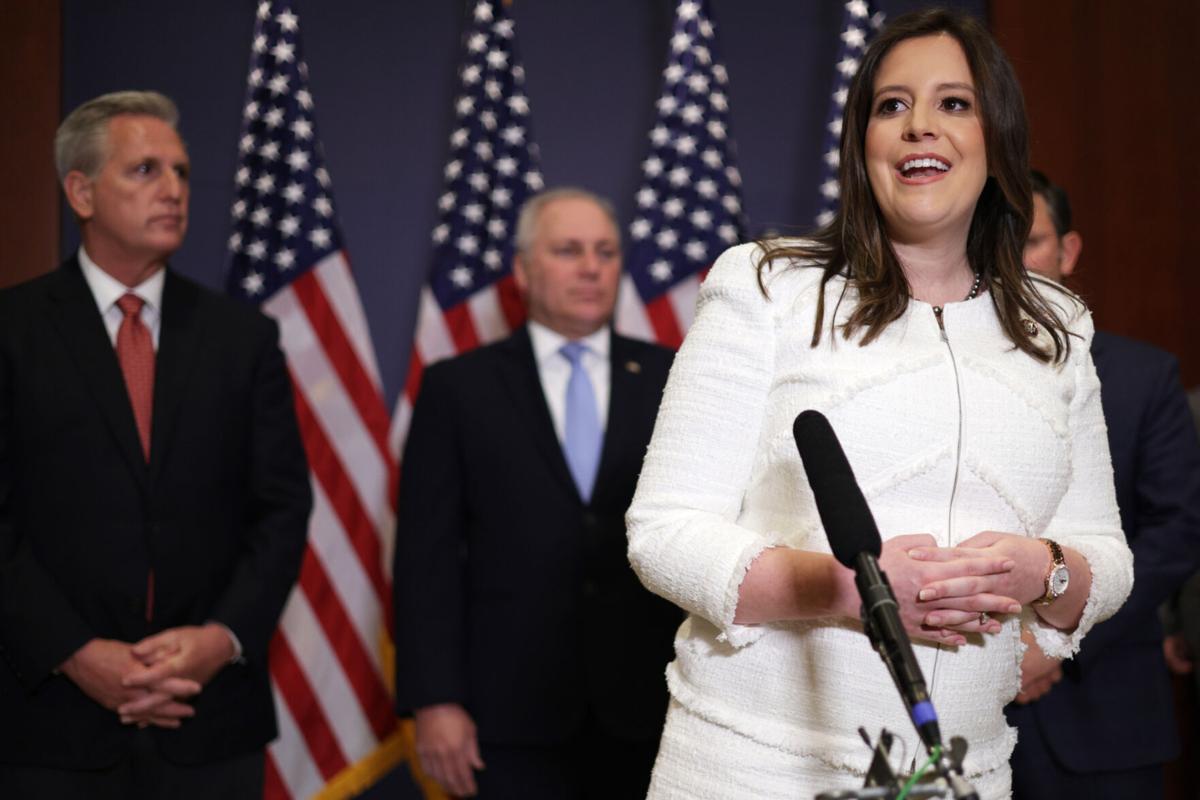 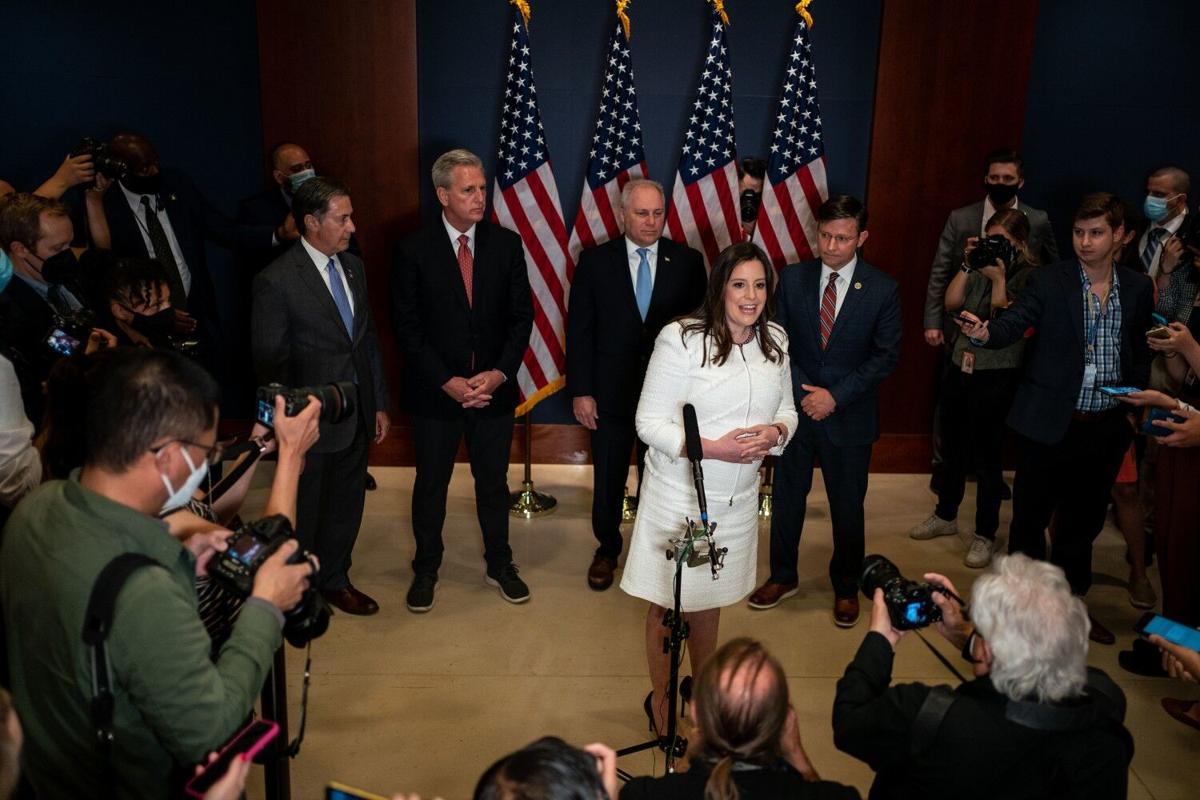 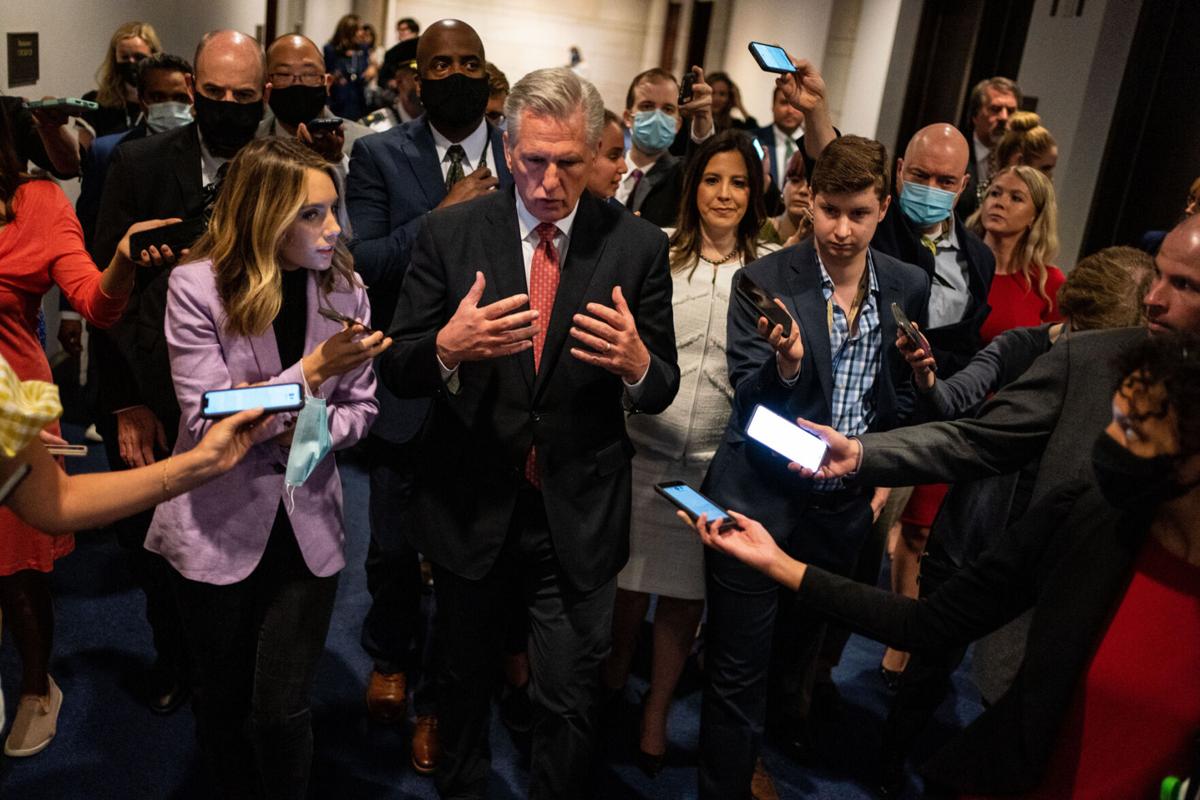 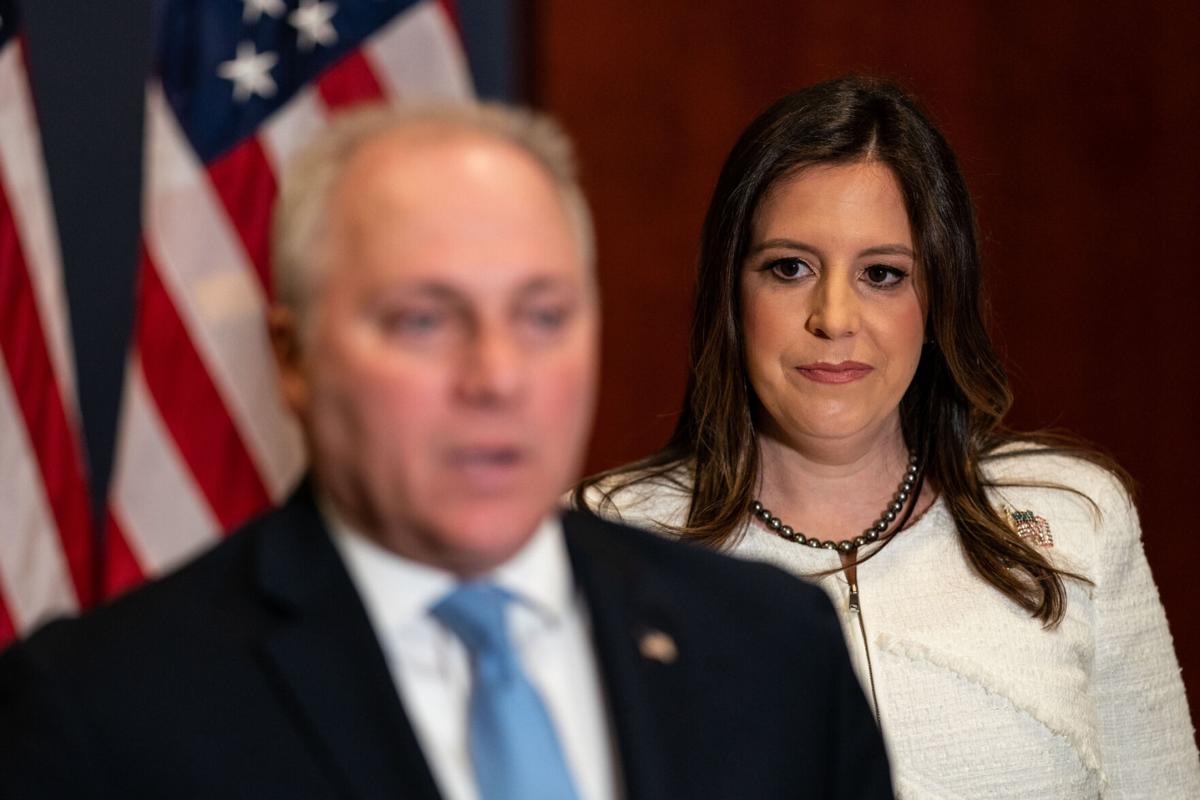 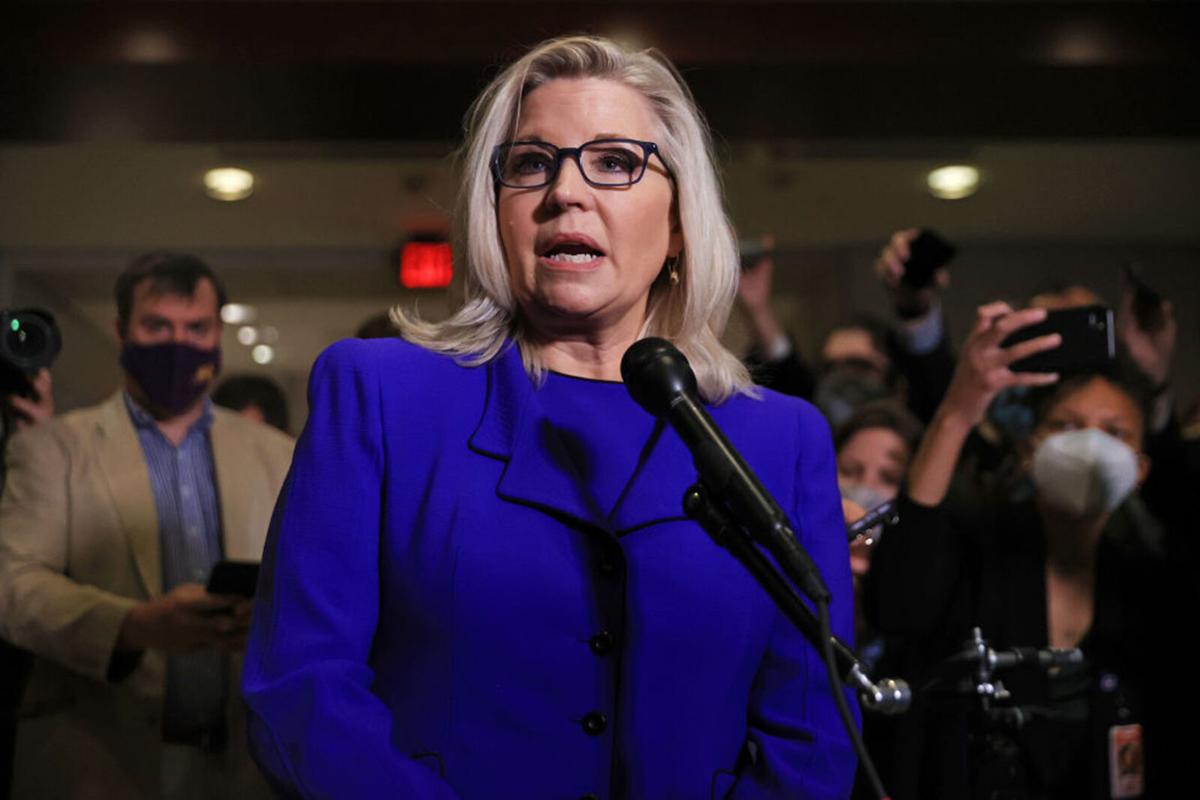 Rep. Liz Cheney, R-Wyo., speaks to reporters after House Republicans voted to remove her as conference chair on May 12, 2021, in Washington, D.C. Chip Somodevilla/Getty Images/TNS 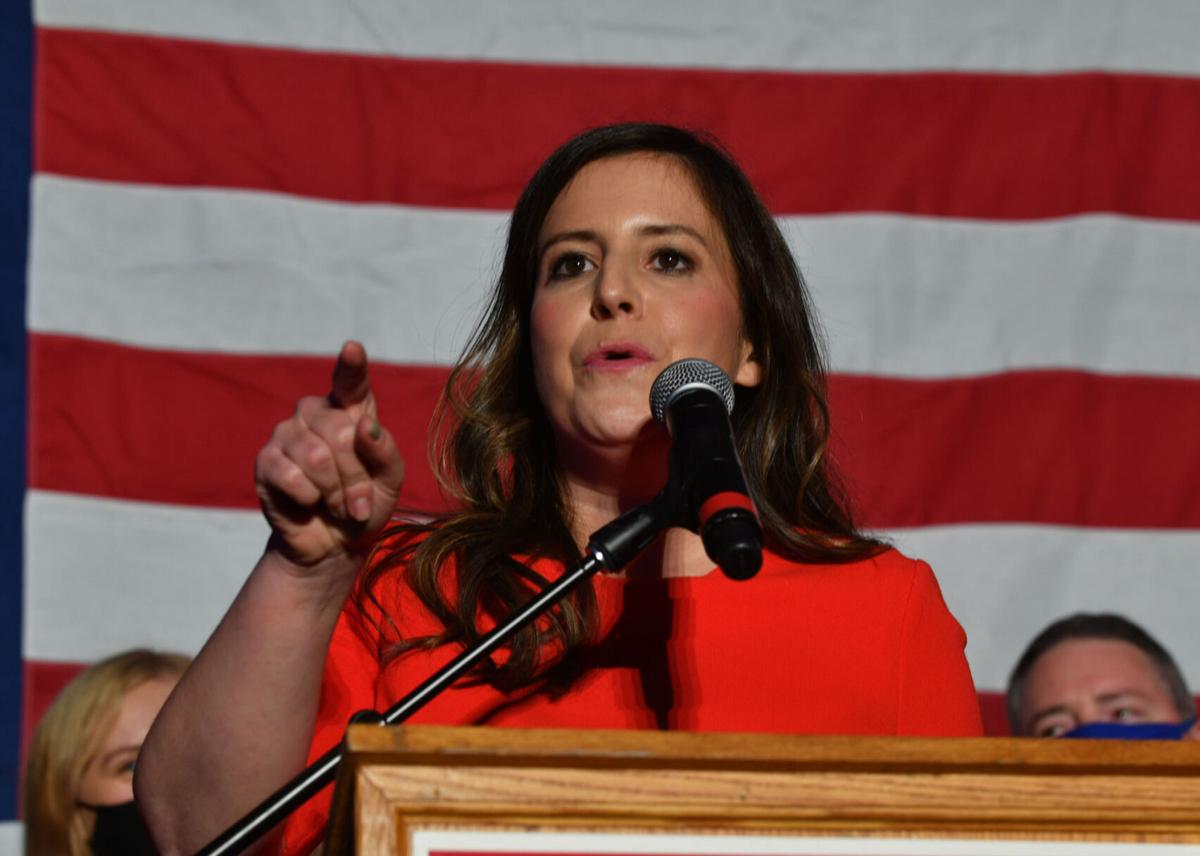 Rep. Liz Cheney, R-Wyo., speaks to reporters after House Republicans voted to remove her as conference chair on May 12, 2021, in Washington, D.C. Chip Somodevilla/Getty Images/TNS

WATERTOWN — House Republicans voted Friday morning to elect Rep. Elise M. Stefanik as its Republican Conference chair and third in the party’s command, replacing Rep. Elizabeth L. “Liz” Cheney and propelling her to one of the top political positions in the country.

“I’m truly honored and humbled to earn the support of my colleagues to serve as House Republican Conference Chair,” Rep. Stefanik said in a statement Friday. “The American people are experiencing an economic crisis, a border crisis, an energy crisis, and a national security crisis due to Far-Left radical policies. House Republicans will continue to put forth policies focused on growing our economy and getting people back to work, reopening our schools, promoting American energy independence, securing our border, strengthening our national security, and protecting our Constitution.”

“Congratulations to Elise Stefanik for her Big and Overwhelming victory! The House GOP is united and the Make America Great Again movement is Strong!” his statement said.

Rep. Cheney of Wyoming was voted out of the third-highest leadership position within the Republican Party during a reported closed-door meeting in the basement of the U.S. Capitol. Her removal came after she made repeated statements criticizing former President Trump and his claims that the 2020 presidential election was fraught with voter fraud, as well as the role these contentions may have played in the Jan. 6 riot at the Capitol.

“There is no one better suited for this critical role as we sight our sights on retaking the House Majority in next year’s midterms,” he said in a statement. “Her ascension to leadership will be a tremendous asset for all New Yorkers who will have a powerful and influential voice in the halls of Congress.”

The National Federation of Republican Women also congratulated Rep. Stefanik in a statement.

“We look forward to your strong leadership as you work to unite the Republican party,” said the federation’s president, Trisha Turner. “You are an outstanding role model for women and we stand behind you. Because of this, many more will be empowered to run for office.”

“Elise Stefanik’s rise to leadership in the Republican Congressional Conference was propelled by her allegiance to Donald Trump, her support for the “Big Lie” that the presidential election was stolen, and her adherence to the most extreme policies of her Party,” Mr. Jacobs said in a statement. “Congresswoman Stefanik should celebrate her success now, as it will be short-lived in a state that has firmly rejected Donald Trump and all that he stands for. Like Icarus, she is flying too close to the sun and a precipitous plummet is soon to follow.”

It’s no longer enough to say that Biden didn’t win in a free and fair election. The new test of Trump supporters willingness to disregard reality is being willing to accept that there was no riot or attack on the Capitol on January 6th. Those folks were just acting like normal tourists. Haven’t heard Stefanik get behind the New Big Lie. Yet.

A Colorado man who was recently charged with murder in the disappearance of his wife a year ago has also been charged with voter fraud for voting for Donald Trump in the 2020 presidential election using his wife's mail-in ballot, according to an affidavit.

Anyone who supports Liz Cheney or Cobb for that matter, is for ‘America Last’..

The usual suspects that can accept the 2020 election where Elise won by 19 points..

It is interesting that often the WDT is criticized by liberal partisans who claim this newspaper is too conservative! In this case, Muir and Kelly ended the article with a statement by Jay Jacobs, giving the Dems the last word. What does the last paragraph even mean? Does Jacobs have the power to predict the future or does he get a thrill from pretending he has that power? Predicting the fall of Elise Stefanik is a fool's errand. C'mon Dems, practice what you preach and support a strong woman. How about encouraging "diversity" dems? You know, diversity of thought. The constant hypocrisy of so called feminists who are actually misogynists, and free speechers who are actually speech stiflers is stupifying but not surprising.

I see the usual Cobb supporters can’t get over the 2020 loss.

a political philosophy, movement, or regime (such as that of the Fascisti) that exalts nation and often race above the individual and that stands for a centralized autocratic government headed by a dictatorial leader, severe economic and social regimentation, and forcible suppression of opposition

Being able to criticize elected leaders is freedom.

Stefanik claimed that the United States had the worst job report ever.

Congrats! Always an independent thinker, this was a smart and logical choice. She was too smart to get engaged in the Governor's race in our destroyed state. As usual, Elise plays chess while her antagonists play checkers. And in typical main stream fashion, anytime the right picks someone, they have to attack them. It's quite fascist of the media actually and shameful all at once.

“We look forward to your strong leadership as you work to unite the Republican party,” said the federation’s president, Trisha Turner. “You are an outstanding role model for women and we stand behind you. Because of this, many more will be empowered to run for office.”

First, good luck with unifying the party behind the lie that Trump actually won the election. I suppose the truth is really overrated, tho. Secondly, a woman who joins a group of powerful men to demote another woman for the sole reason that she was telling the truth is a good role model? So, those other women will be empowered to run for office as long as they’re willing to lie and subsume any trace of morality and loyalty to the democratic principles this country was founded on? Got it!