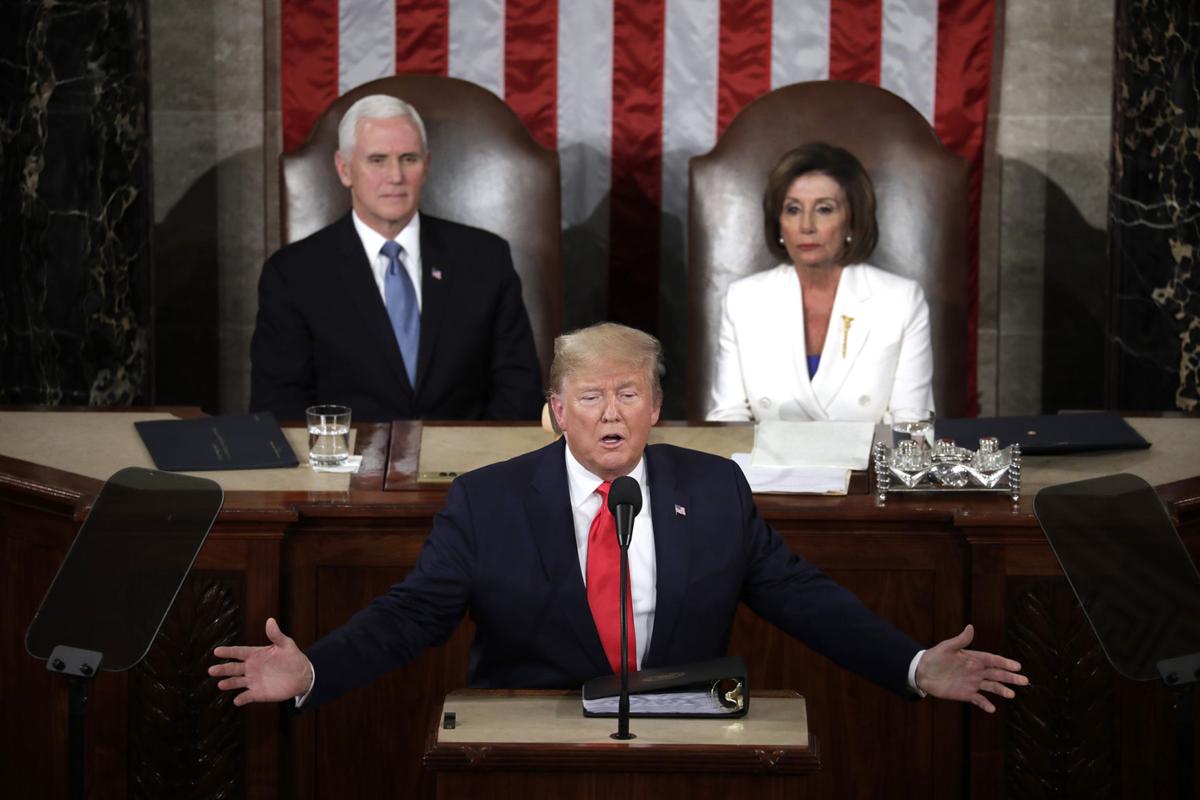 President Donald Trump delivers the State of the Union to a joint session of the U.S. Congress on Capitol Hill on Tuesday. Yuri Gripas/Abaca Press/TNS 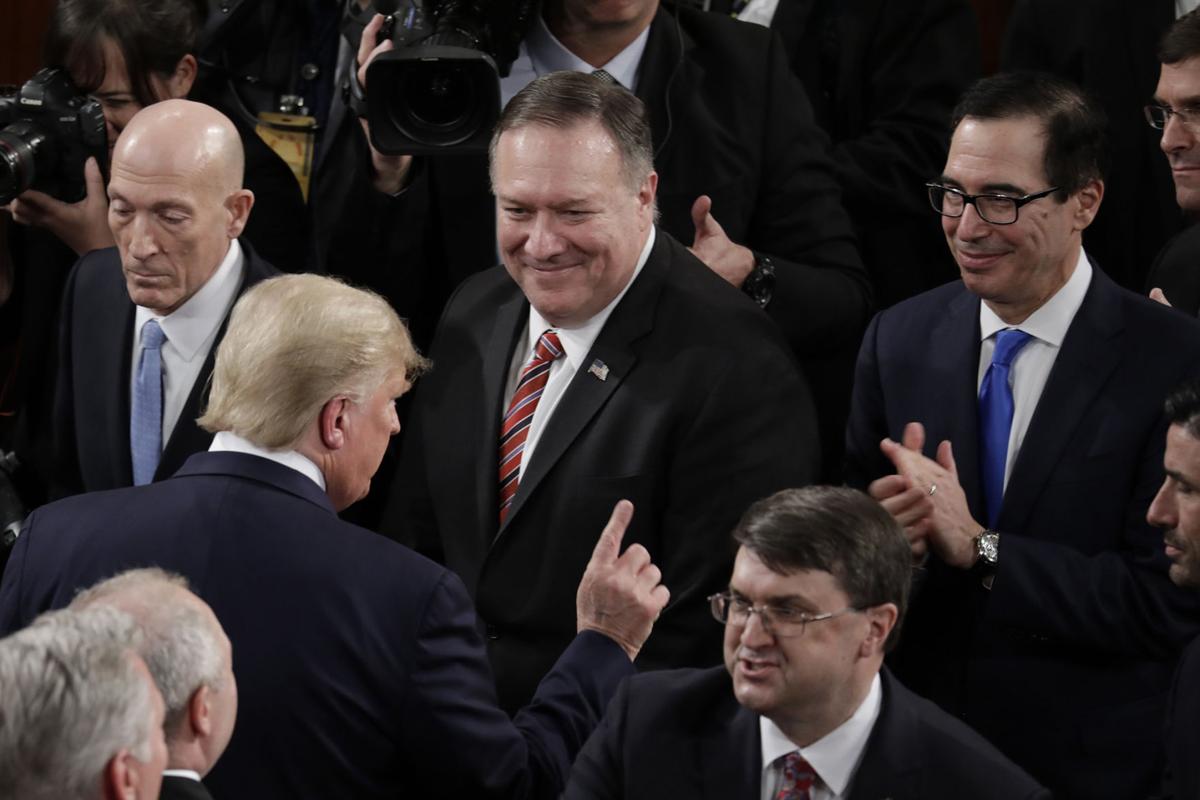 U.S. President Donald Trump is greeted by U.S. Secretary of State Mike Pompeo, center, and Treasury Secretary Steve Mnuchin, right, as he arrives to deliver his State of the Union address on Capitol Hill on Tuesday, Feb. 4, 2020 in Washington, D.C. Yuri Gripas/Abaca Press/TNS 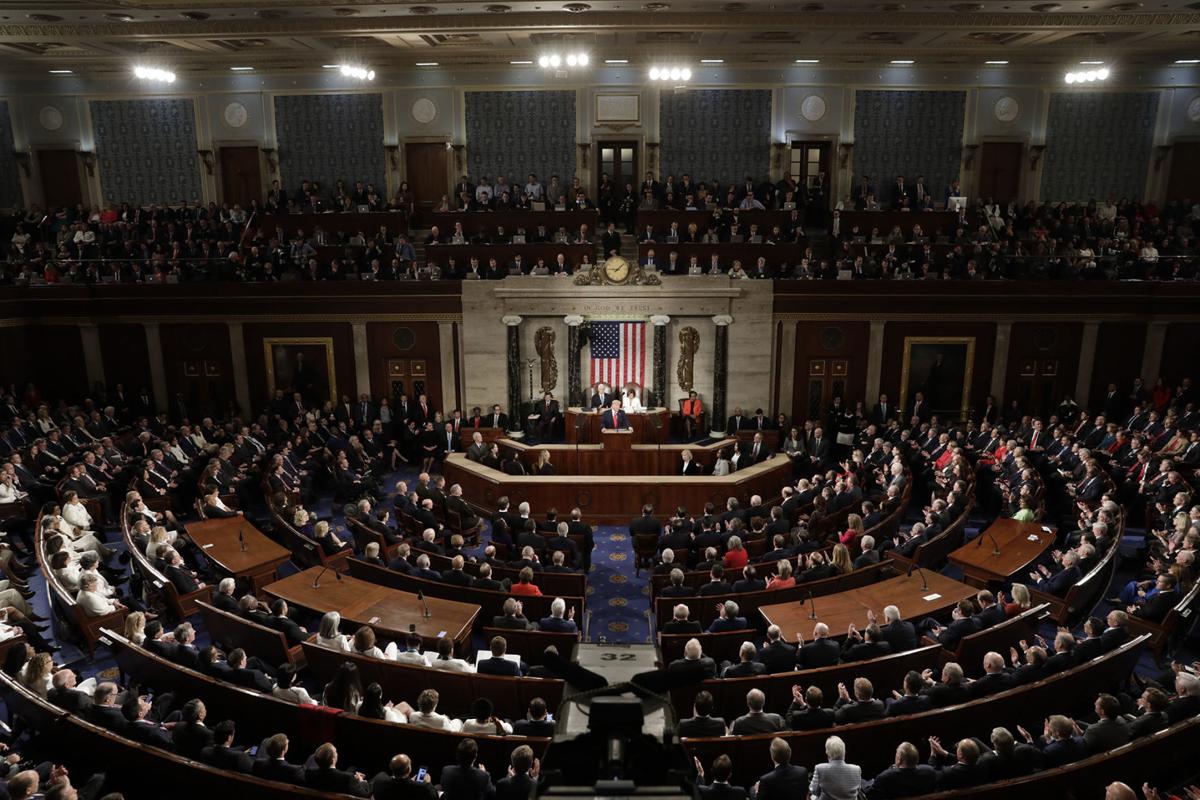 President Donald Trump made the case for his reelection on Tuesday night in his third State of the Union address. Yuri Gripas/Abaca Press/TNS

President Donald Trump delivers the State of the Union to a joint session of the U.S. Congress on Capitol Hill on Tuesday. Yuri Gripas/Abaca Press/TNS

U.S. President Donald Trump is greeted by U.S. Secretary of State Mike Pompeo, center, and Treasury Secretary Steve Mnuchin, right, as he arrives to deliver his State of the Union address on Capitol Hill on Tuesday, Feb. 4, 2020 in Washington, D.C. Yuri Gripas/Abaca Press/TNS

President Donald Trump made the case for his reelection on Tuesday night in his third State of the Union address. Yuri Gripas/Abaca Press/TNS

WASHINGTON — President Donald Trump highlighted economic gains and his own case for reelection in his third State of the Union address Tuesday night to a joint session of Congress, where lawmakers have battled since September over whether he should be removed from office.

Republican lawmakers chanted “four more years!” before Trump began speaking, setting an intensely partisan tone for the address on the eve of the president’s virtually certain acquittal in the Republican-controlled Senate, which is scheduled to vote Wednesday afternoon, at the start of an election season.

“In just three short years, we have shattered the mentality of American decline and we have rejected the downsizing of America’s destiny,” Trump said. “We are moving forward at a pace that was unimaginable just a short time ago, and we are never going back!”

Trump made his way to the rostrum on the House floor just seven weeks after the Democratic majority in the same chamber approved two articles of impeachment against him, charging him with abuse of office and obstruction of Congress.

Trump did not mention his impeachment, but when House Speaker Nancy Pelosi, D-Calif., extended her hand in greeting, he did not take it, a remarkable break with protocol that spoke volumes about the bitter divisions that have deepened under Trump.

Trump offered few major policy proposals but presented a triumphant view of the nation’s progress under his administration. “The state of our union is stronger than ever before,” he declared.

He contrasted his record with President Barack Obama’s, blaming his predecessor for a decline in the workforce that was largely triggered by the recession that began before Obama took office in 2008, and taking credit for recent gains.

“From the instant I took office, I moved rapidly to revive the U.S. economy — slashing a record number of job-killing regulations, enacting historic and record-setting tax cuts, and fighting for fair and reciprocal trade agreements,” Trump said.

Democrats sat without clapping as the president recited a litany of economic and jobs numbers.

“This is a blue-collar boom,” Trump said, pointing to a rise in median household income and the steady rise of the nation’s stock market since he took office.

In another unexpected move, Trump recognized conservative radio host Rush Limbaugh, who this week announced that he is fighting lung cancer. Trump said he was awarding Limbaugh the Presidential Medal of Freedom, the highest civilian honor, and then looked up to the balcony as first lady Melania Trump put the medal around Limbaugh’s neck.

As he embraced the pageantry and spectacle of the annual televised address, Trump aimed to define himself as a Washington outsider fighting a thicket of partisan opposition to bring the changes his supporters want.

And he presented his accomplishments — namely, a revised North American trade agreement and criminal justice reform — as priorities that his predecessors failed to get done.

Trump’s signature on the U.S. trade deal with Canada and Mexico last week marked one of his most concrete accomplishments, and he said it showed he had delivered on his pledges to retool America’s trade relationships.

“Many politicians came and went, pledging to change or replace NAFTA — only to do absolutely nothing. But unlike so many who came before me, I keep my promises,” he said.

Unlike President Bill Clinton, who publicly apologized to Americans for his mistakes following his impeachment and acquittal 21 years ago, Trump was not expected to make a show of contrition.

He plans to give a separate speech on his expected acquittal after the Senate vote Wednesday, according to an administration official.

Some Republican lawmakers who plan to vote against removing Trump from office on Wednesday say they are troubled by the evidence that he withheld U.S. military aid to Ukraine in an effort to pressure the government there to investigate former Vice President Joe Biden, who is seeking the Democratic nomination.

The Democrats’ impeachment effort may have given Trump a slight lift, at least for now.

In recent weeks, Trump’s support has risen slightly as he has showcased policy wins on trade and foreign policy while Democrats pressed their impeachment case in the Senate. A Gallup tracking survey Tuesday showed Trump’s approval rating at 49%, a record high for his presidency.

But the partisan acrimony and pessimism that intensified throughout the trial cast a pall over the State of the Union address, belying whatever calls for bipartisanship and national unity were programmed into the president’s teleprompter.

Republicans feel aggrieved that Trump was impeached, while many Democrats are furious that they were blocked from even calling witnesses at the Senate trial. Partly as a result, his expected acquittal comes after the shortest presidential impeachment trial in history.

Democrats, eager to defeat Trump in November, were demoralized after technical problems created mass confusion and lengthy delays at Monday’s first-in-the-nation Iowa caucuses, an ominous start to the party’s nomination fight and the 2020 election cycle.

Trump made at least passing reference to some of the more progressive candidates near the top of the field, panning the “Medicare for All” proposal backed by Sens. Bernie Sanders of Vermont and Elizabeth Warren of Massachusetts.

For the second year in a row, a large group of Democratic women dressed in white to honor the women’s suffrage movement and seemingly in protest of the president.

“The State of the Union is hurting because of the occupant of the White House, who consistently demonstrates contempt for the American people, contempt for Congress, and contempt for our Constitution — strong-arming a sham impeachment trial in the Senate. This presidency is not legitimate,” Pressley said.

Other Democrats attending the speech protested Trump’s environmental policies by wearing pins displaying a popular graphic representation of how much the planet has warmed since 1850.

“We are wearing these climate pins to send the message that Americans will not hear from President Trump tonight: Climate change is real. We need to act, and we need to act now,” said Sen. Thomas R. Carper, D-Del.

Democrats planned to respond to Trump’s address with a focus on working-class struggles and health care, according to excerpts from the party’s official response that were released ahead of time.

“It doesn’t matter what the president says about the stock market. What matters is that millions of people struggle to get by or don’t have enough money at the end of the month after paying for transportation, student loans, or prescription drugs,” Michigan Gov. Gretchen Whitmer planned to say.

(Times staff writer Erin B. Logan contributed to this report.)

The GREATEST State of The Union Address in the HISTORY os The United States of America given By the GREATEST President in HISTORY, President Donald J Trump.

The forest was shrinking but the trees kept voting for the axe. For the axe was cruel but shrewd and convinced the trees that because his handle was wood he was one of them.

You would make Aesop proud. Whose version do like best; Townsend, Croxall.....?