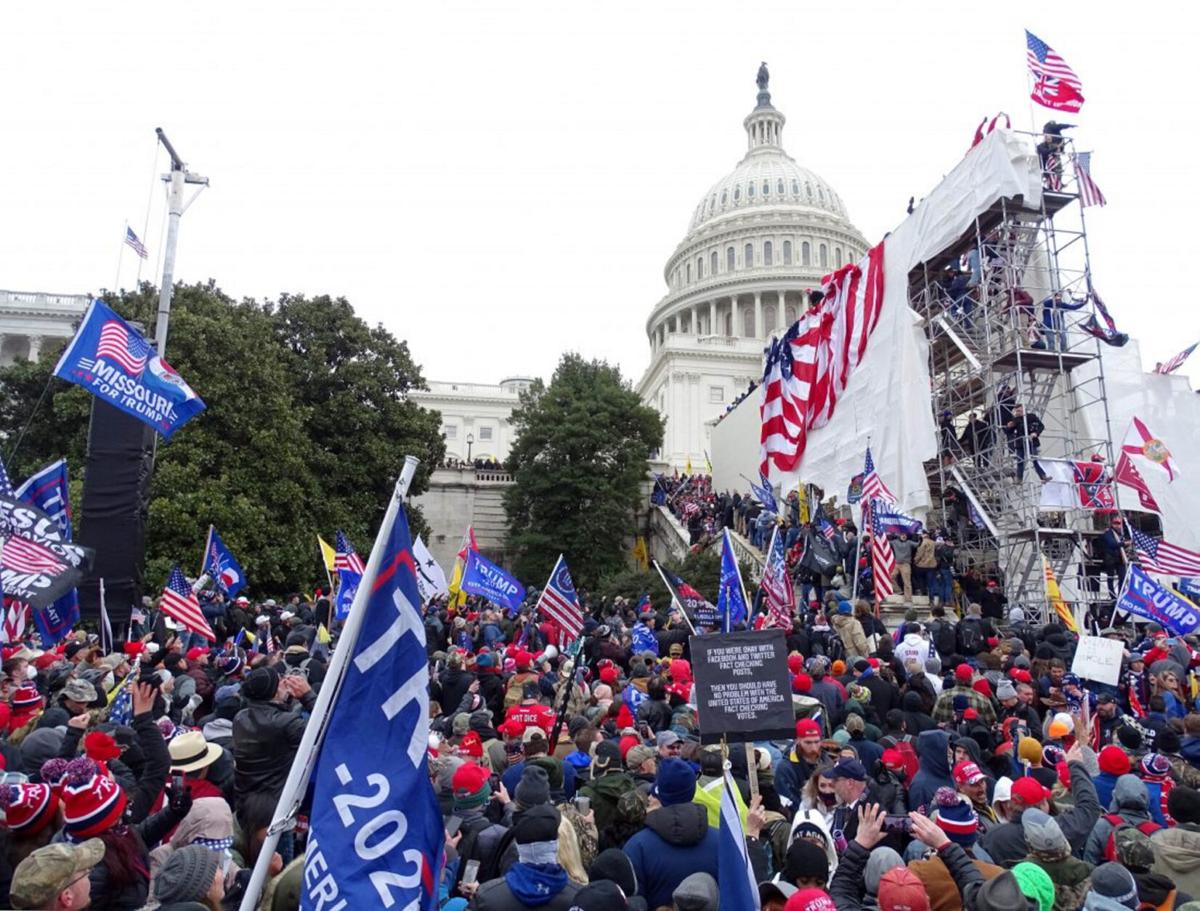 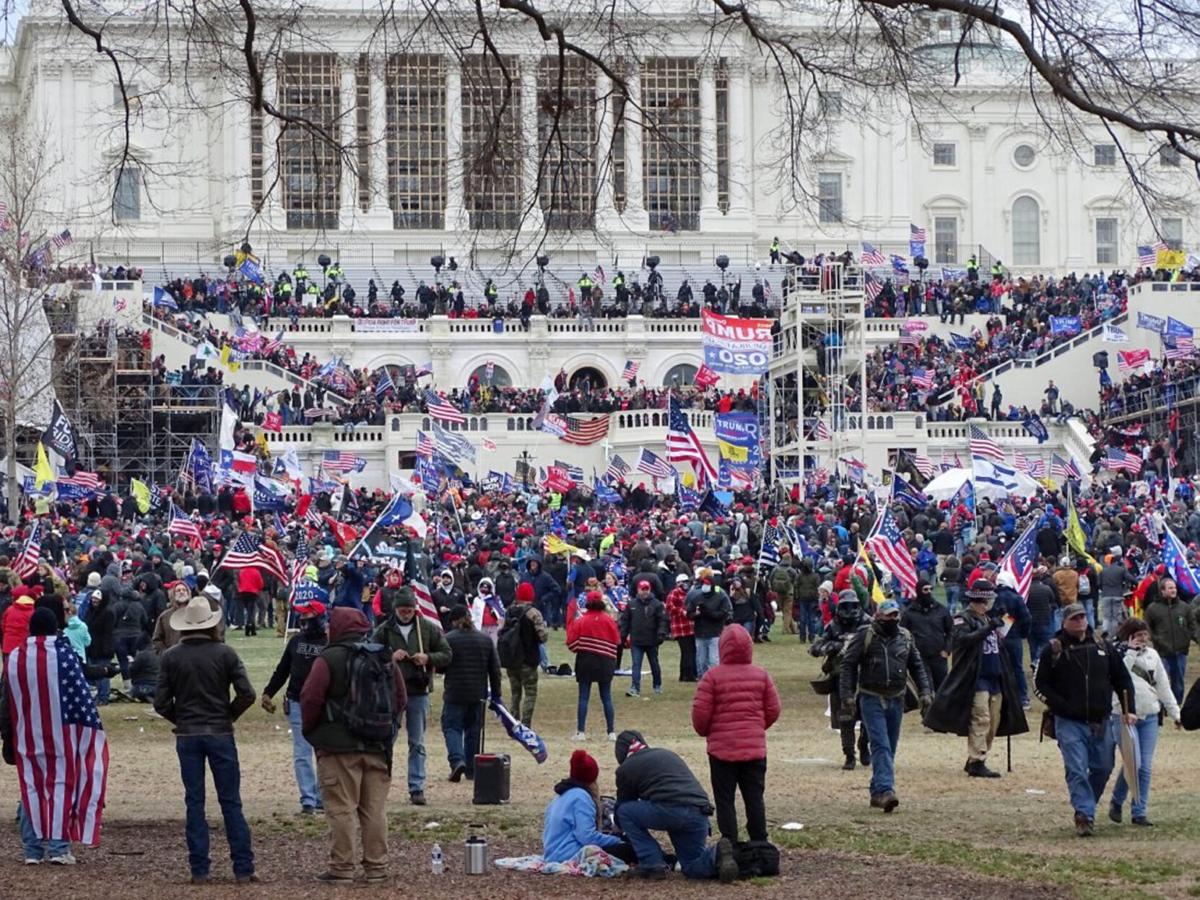 Thousands of Donald Trump supporters gathered on Capitol Hill on Wednesday to protest Congress. The rally turned into a riot when a portion of the crowd broke into the Capitol building. Jim Lanthier photo via Adirondack Daily Enterprise 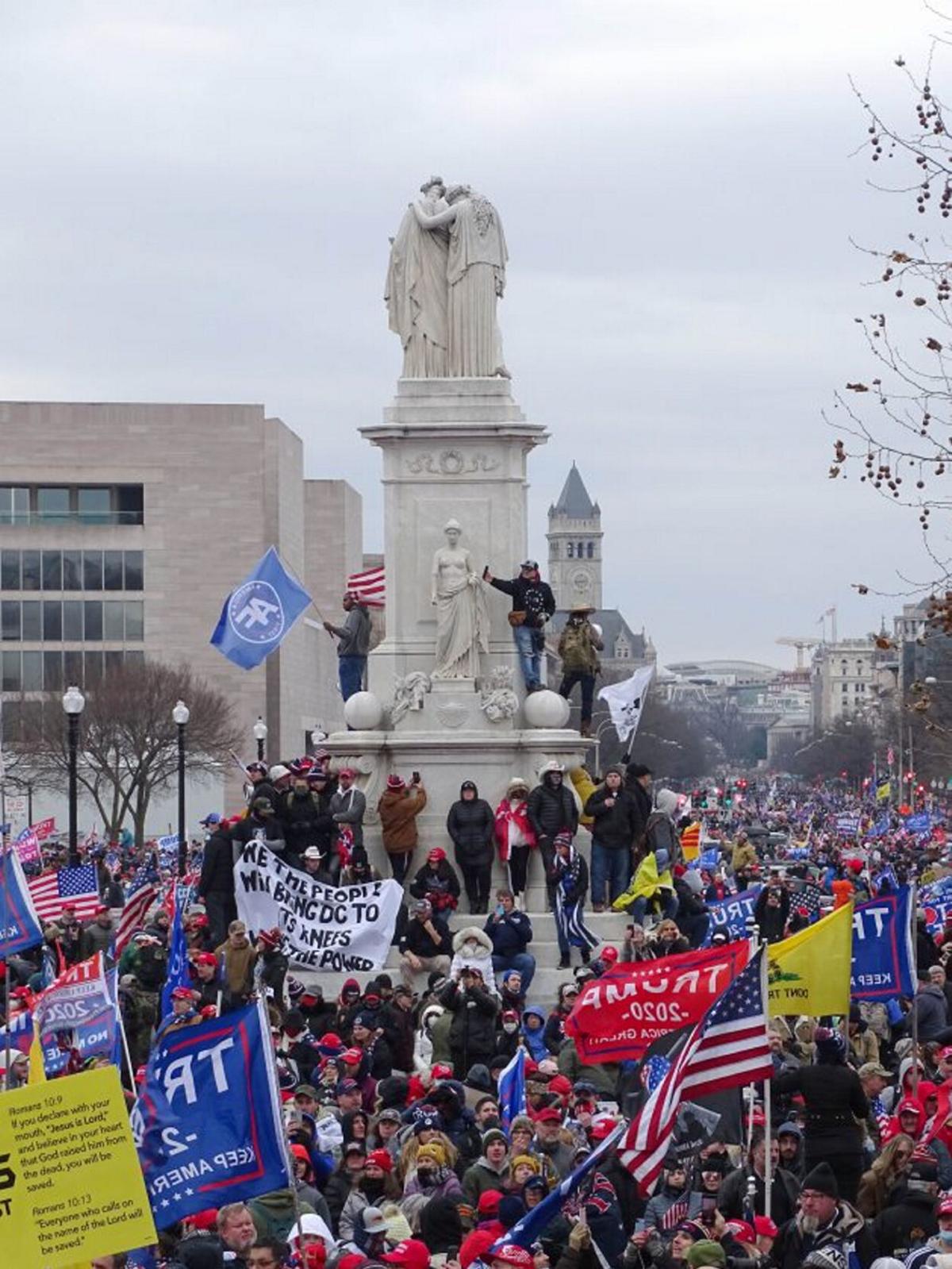 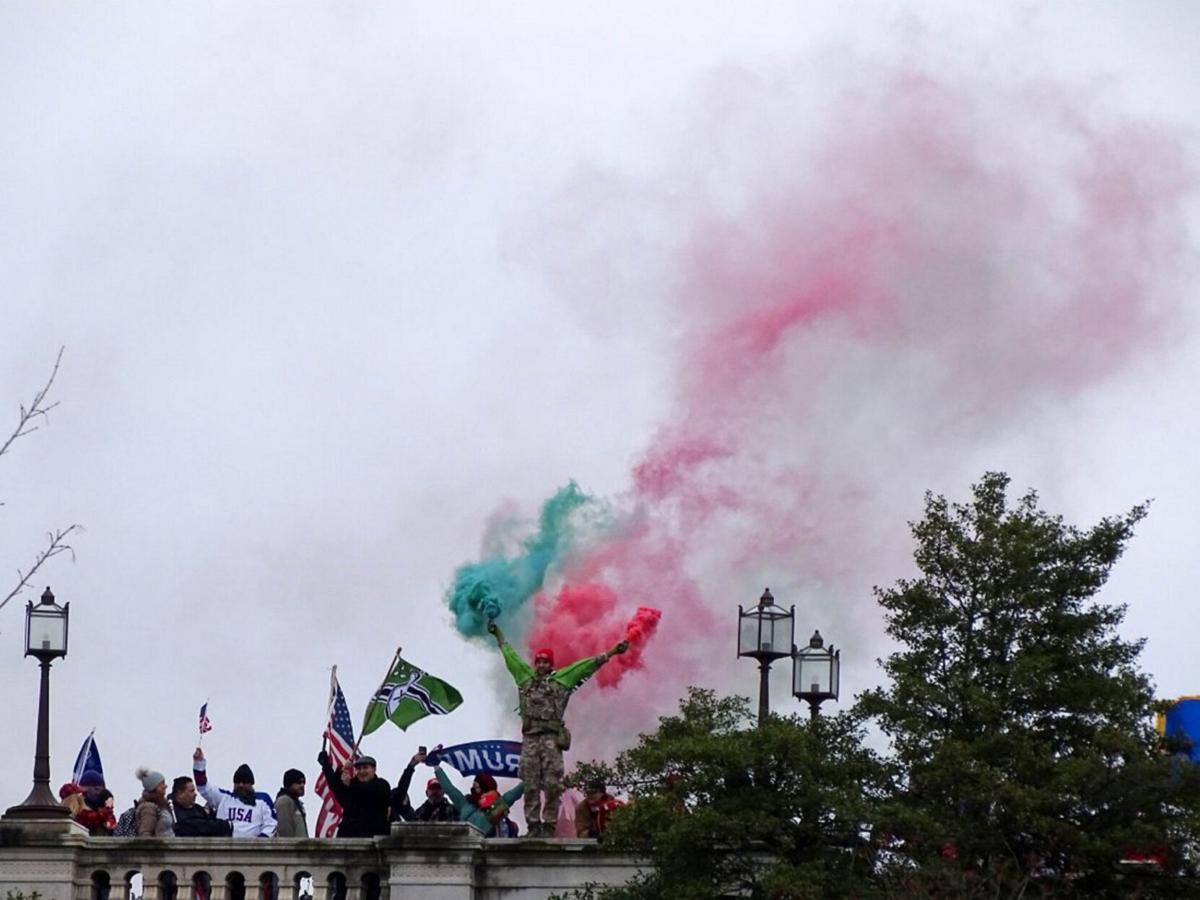 Donald Trump supporters party on Capitol Hill on Wednesday before some of them broke into the Capitol building. The green flag pictured here is the flag of “Kekistan,” a redesign of the Nazi war flag, flown by alt-right users of the 4chan website. Jim Lanthier photo via Adirondack Daily Enterprise

Amid a sea of flags on the U.S. Capitol lawn Wednesday, Tupper Lake photographer Jim Lanthier documented the scene where thousands of Donald Trump supporters had shown up to protest Congress’ certification of Joe Biden as the winner of the 2020 election.

While the day is known for the violent occupation by rioters who broke their way into the halls of Congress, Lanthier, a Trump supporter, said the atmosphere outside was more that of a festival.

“It was a Woodstock moment,” he said.

He said he wasn’t in the riot that took place when a portion of the crowd broke into the Capitol itself, but outside on the lawn he saw skirmishes between rioters and the police.

For the most part, though, he said his experience was nonviolent, calling it “amazing” and “surreal.”

He shot around 4,000 photos and recorded audio the entire time.

“I don’t want to cause any controversy,” he said.

Lanthier got in line for a noontime Trump speech at the Ellipse park at 7 a.m., with thousands of others. After the speech he followed the mass of people down Pennsylvania Avenue and toward the Capitol.

He had arrived several days early to get the lay of the land, and suddenly he noticed that the fence blocking access to the Capitol lawn, where Biden will be inaugurated Jan. 20, had been trampled and people were covering the yard and climbing everything in sight.

“When I saw people climbing all over the monuments, climbing the side of the (Capitol) I realized ... ‘That was fenced in,’” Lanthier said. “I was like, ‘Oh my God, am I even supposed to be here?’”

He did not believe this was planned.

“They didn’t come here with intent on going into the Congress building,” he said.

But he said it was easy for the mass of people to get past the Capitol Police and fencing.

“I guess that was the purpose. There was so many people there they couldn’t do anything except for back off,” Lanthier said.

He saw some people fighting police. One person threw something at an officer, and Lanthier ran out of the way as the officer returned fire with a rubber bullet. A concussion grenade went off around 15 feet from him, and he said at one point he saw a police officer with a bleeding head.

He made it to the Capitol steps, but he was exhausted and limping from being on his feet all day, so he did not go up and in.

Legislators, including north country Rep. Elise Stefanik, were hurried out of their chambers to safer locations.

A woman who tried climbing through the broken glass of a door was shot and killed by a Capitol Police officer. She was a 35-year-old Air Force veteran from Southern California, a Trump supporter and a follower of the QAnon conspiracy theory. A Capitol Police officer, Brian Sicknick, died due to injuries suffered during the invasion. Three other people died in the day’s chaos as well.

Outside, Lanthier said the scene was more peaceful.

“It was all just regular people like you and I,” Lanthier said. “No one had any weapons. No one was swinging sticks, throwing rocks. No one had guns and knives. No one was beating each other up, other than at the front end.”

He said he spoke with people coming out of the building who told him about the shooting and their experience walking around House members’ offices.

Asked what the purpose of the event was, Lanthier said there were people from all over the world, coming in different groups with different intentions, so there was no single answer. But he said most people there believed the 2020 election wasn’t fair.

He also said it was, in part, an anti-COVID-19 lockdown event.

He was asked if he thought the event was successful.

Lanthier speculated that members of Antifa or Black Lives Matter may have been the ones to break in to make Trump supporters look bad although he did not provide evidence of that.

“These people who actually made it into the building, there’s a possibility that this was a false flag,” Lanthier said.

Theories that the rioters were not Trump supporters are largely unfounded. Many well-known Trump and QAnon internet personalities were among the people who filmed themselves or were photographed committing crimes in the Capitol.

He was asked why the people inside were shouting the same slogans — “Stop the steal” and “We want Trump” as the people outside.

“If they wanted to do something wrong and look like a Trump supporter, they would also say that,” Lantheir said. “It’s hard to actually draw those conclusions. ... It’s confusing.”

The last thing he did before leaving Washington on Thursday was to walk around the Capitol building again. He said a brand-new fence was going up.

Stefanik needs to be censored or removed. Her insanity and cult like fawning is over a man whose supporters attempted to overthrow the US Government (and kill the vice president). She is a useless legislator who is now tainted. She wont get a co-sponsor on anything because she led aa coup against the congress itself.

AP review of social media posts, voter registrations, court files and other public records for more than 120 people either facing criminal charges related to the Jan. 6 unrest or who, going maskless amid the pandemic, were later identified through photographs and videos taken during the melee.

That evidence shows the mob was overwhelmingly made up of longtime Trump supporters, including Republican Party officials, GOP political donors, far-right militants, white supremacists and adherents of QAnon.

They are identifying and arresting them now, Trump supporters and some with plastic handcuffs. Every one needs to be prosecuted. This lie that it was Antifa is stupid.