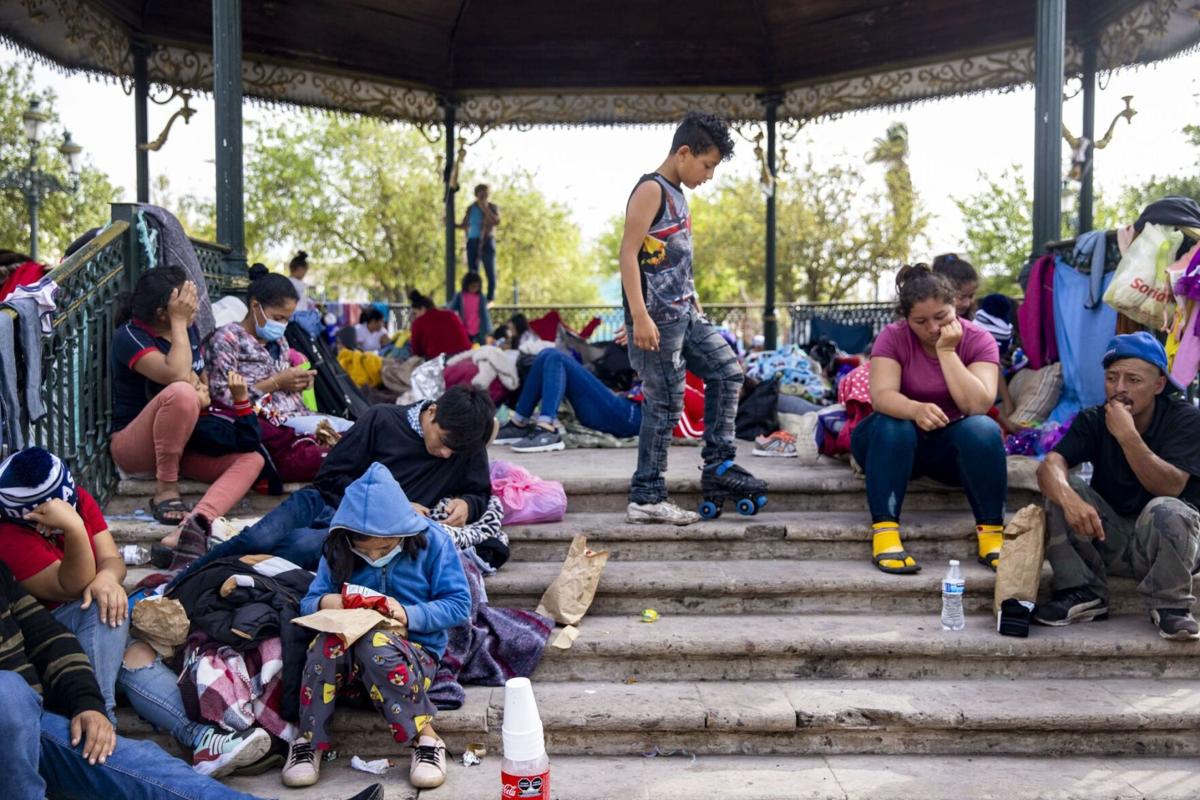 A young boy plays with a single roller-skate as other expelled migrants sit around a gazebo in a public square in the Mexican border city of Reynosa on Wednesday. Migrants have resorted to living at the plaza as the U.S. continues to expel them after they cross the border under Title 42, a pandemic-related public order still in place and left over from the Trump administration. Lynda M.  González/Dallas Morning News/TNS 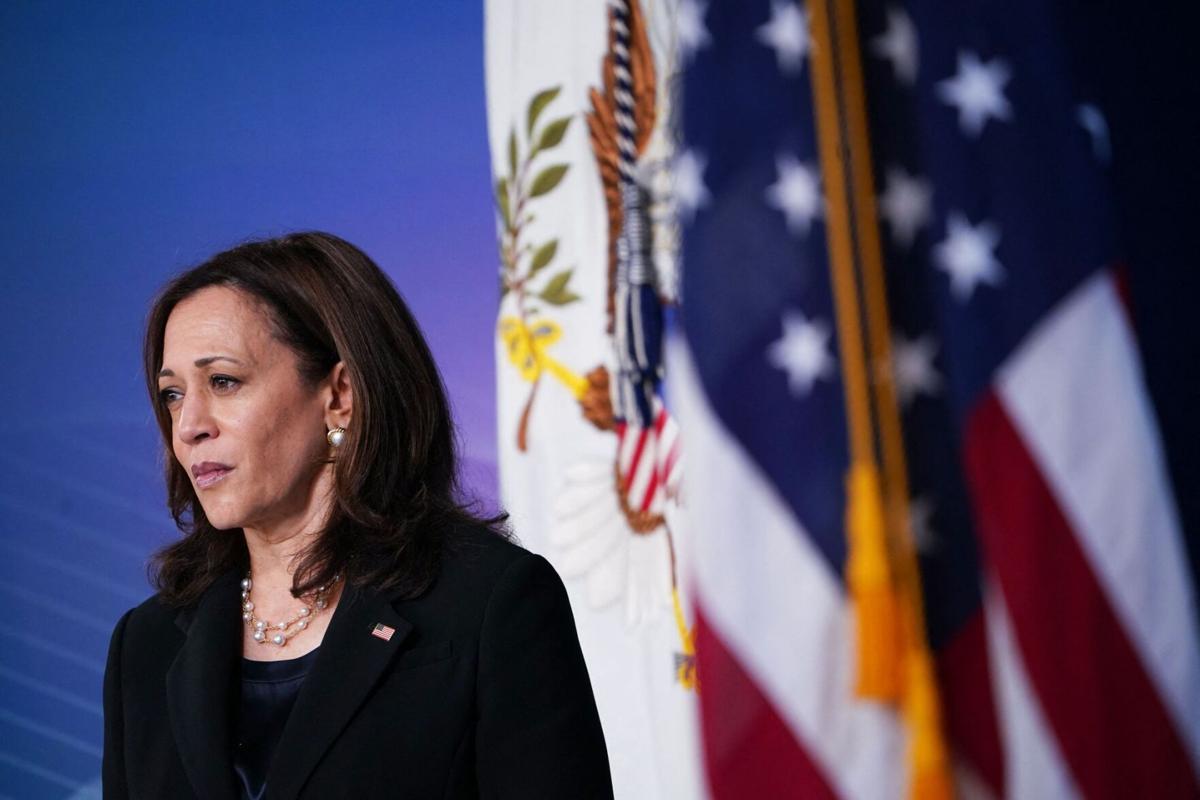 US Vice President Kamala takes part in an event on high-speed internet in the South Court Auditorium of the Eisenhower Executive Office Building, next to the White House in Washington, D.C., on June 3, 2021. Mangel Ngan/AFP/Getty Images/TNS

A young boy plays with a single roller-skate as other expelled migrants sit around a gazebo in a public square in the Mexican border city of Reynosa on Wednesday. Migrants have resorted to living at the plaza as the U.S. continues to expel them after they cross the border under Title 42, a pandemic-related public order still in place and left over from the Trump administration. Lynda M.  González/Dallas Morning News/TNS

US Vice President Kamala takes part in an event on high-speed internet in the South Court Auditorium of the Eisenhower Executive Office Building, next to the White House in Washington, D.C., on June 3, 2021. Mangel Ngan/AFP/Getty Images/TNS

WASHINGTON — Three previous U.S. administrations have sought without success to stem the tide of migrants from Central America. Vice President Kamala Harris heads to Mexico and Guatemala next week hoping to emerge with a migration strategy that will work where others failed.

Harris — deputized by President Joe Biden to deal with the historic numbers of migrants at the southern border — has said the U.S. is committed to improving economic conditions in Guatemala, Honduras and El Salvador so their citizens have less reason to leave.

That’s been tried before, yet the countries remain among the poorest in the Western Hemisphere and racked by violence. While Biden and Harris have yet to develop an official strategy, they have vowed to reverse former President Donald Trump’s aggressive policies and make the U.S. more welcoming to migrants desperate to escape nations where economic misery was compounded by a pair of hurricanes late last year.

“The U.S. makes a mistake of reducing Central America to a problem of migration. Trump did it, Obama did it. And there isn’t the short-term fix to migratory problems,” said Eric Olson, the director of the Central America-D.C. platform for the Seattle International Foundation, who has discussed the issue with Harris.

While the White House initially promised a new strategy before Harris’ trip, it’s now expected only after she returns. “Vice President Harris is leading diplomatic efforts to inform the strategy which requires engaging with partners on the ground,” her chief spokesperson, Symone Sanders, said in an email.

In advance of the trip, Harris directed aides to review previous U.S. plans to assess which policies worked and which didn’t, according to a senior administration official, who asked not to be identified because the discussions have been private. She also asked aides to identify metrics to judge the success or failure of the administration’s efforts, the official said.

Harris has spoken with the presidents of Guatemala and Mexico and met with a number of regional experts in recent weeks. Juan Gonzalez, the National Security Council’s senior director of Western Hemisphere affairs, traveled to Mexico in May for meetings with government officials on migration issues, reviving law enforcement cooperation and laying the groundwork for Harris’s visit, according to Mexican and U.S. officials familiar with the talks.

Since the start of the year, U.S. authorities have apprehended or denied entry to more than 200,000 Central American at the southern U.S. border, expelling many of them to Mexico. More than 16,500 children who entered the U.S. unaccompanied by parents or guardians were in shelters supervised by the Health and Human Services Department as of Thursday; 351 have been apprehended daily on average in the last month.

Harris in March took on the task of leading U.S. negotiations over migration, a job that former President Barack Obama gave to Biden as vice president and one with serious political risks. Republicans have blamed the increase in asylum-seekers and other migrants on Biden’s more amicable tone, accusations the White House rejects.

The Biden administration has proposed $4 billion in aid to Guatemala, El Salvador and Honduras over the next four years, requesting $861 million for fiscal year 2022 to begin implementing its program.

In a recent call with Guatemalan President Alejandro Giammattei, Harris also promised $310 million in immediate humanitarian assistance to the region.

Funneling more money into the region — the basis of Biden’s emerging strategy, just as previous U.S. policies — is seen as a gamble by some immigration advocates, who say the U.S. should expand pathways for legal migration and work permits. And any new aid, advocates say, must be backed by greater political pressure on regional leaders.

Biden’s strategy will include new paths for legal immigration, according to two administration officials. They noted that an additional 6,000 visas for temporary workers were recently made available to migrants from the three countries, and said Biden also intends to allocate more refugee slots to Latin America and restore a program Trump ended that allows Central American children to apply for protection in the U.S. while in their home countries.

The vice president has praised Biden’s approach during the Obama administration but has also made some tweaks to the strategy, which was developed to address a migration spike in 2014. Harris wants to involve a broader swath of international organizations, companies and nonprofits, according to senior administration officials. The vice president already announced pledges by MasterCard Inc., Microsoft Corp. and Nestle Nespresso SA to help the region.

Alongside the strategy to bolster the region’s economies, the U.S. has also emphasized the need to crack down on rampant corruption that has undermined past U.S. aid.

“Part of giving people hope is having a very specific commitment to rooting out corruption in the region,” Harris said during a recent meeting with Guatemalan judicial leaders.

Many Central Americans are skeptical of the assistance. Some harbor deep suspicions that date to the Cold War, when the U.S. propped up right-wing political leaders in the region and funneled money to security forces that cracked down on their own citizens.

And among those who support the U.S. approach, there are doubts as to whether the U.S. — with its deep political divisions — would maintain a long-term commitment to the region amid political power shifts. Many programs begun under Obama eventually sputtered and momentum was stunted even further when Trump in 2019 slashed funding to the Northern Triangle countries.

Carlos Hernandez, executive director of the non-profit Association for a More Just Society in Honduras, said he had to fire 40 people after Trump’s sudden aid freeze.

“President Biden’s administration should plan for an eight-year period, so that these programs are more sustainable,” he said. “The structural problems that generate poverty and migration are not ones that are resolved with a quick intervention.”

Since fiscal year 2016, the U.S. Congress has allocated $3.6 billion in foreign assistance to Central America, though the Trump administration redirected nearly $400 million amid the aid suspension.

Trump’s action resulted in U.S. agencies scaling back many assistance programs — some just two years after they were launched, according to the Congressional Research Service.

Absent support from the Trump administration and with resistance from the region’s politicians, international anti-corruption bodies collapsed, and initiatives to advance high-level corruption cases in Guatemala and Honduras have floundered.

Harris’s itinerary doesn’t include either country, and she has yet to speak with their leaders.

Even U.S. efforts that were implemented have produced mixed results.

More people in Guatemala participated in workforce development programs than expected from 2013 to 2018, but the U.S. missed its targets in Honduras and El Salvador, according to a 2019 Government Accountability Office report.

A 2020 Wilson Center study co-authored by Olson and now-State Department Central America envoy Ricardo Zuniga found that the aid programs overseen by Biden as vice president lacked a clearly defined vision and suffered from poor coordination with groups on the ground.

“The impact of the aid has been minimal,” said Roberto Rubio, the executive director of the National Foundation for Development in El Salvador, which has received U.S. aid.

Olson said the Biden administration under Harris has chosen the right approach by prioritizing the corruption fight and trying to rely more heavily on non-governmental organizations and companies to deliver assistance.

“The partnerships in Central America with governments are, I would say, at an all-time low,” Olson said. “We need to look at alternative ways to thinking about this.”