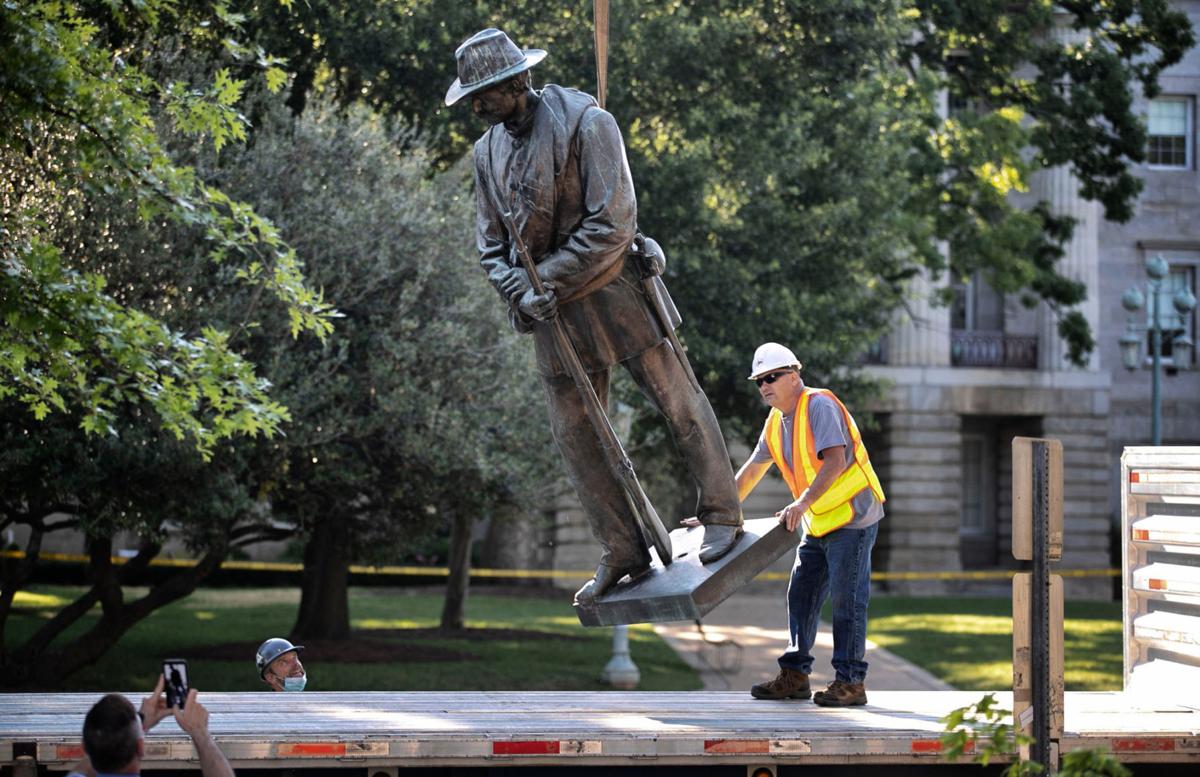 The Confederate monument on the west side of the North Carolina State Capital grounds is dismantled and loaded on a flat bed truck on Salisbury Street on Sunday, June 21, 2020 in Raleigh, N.C. (Robert Willett/The Raleigh News & Observer/TNS) 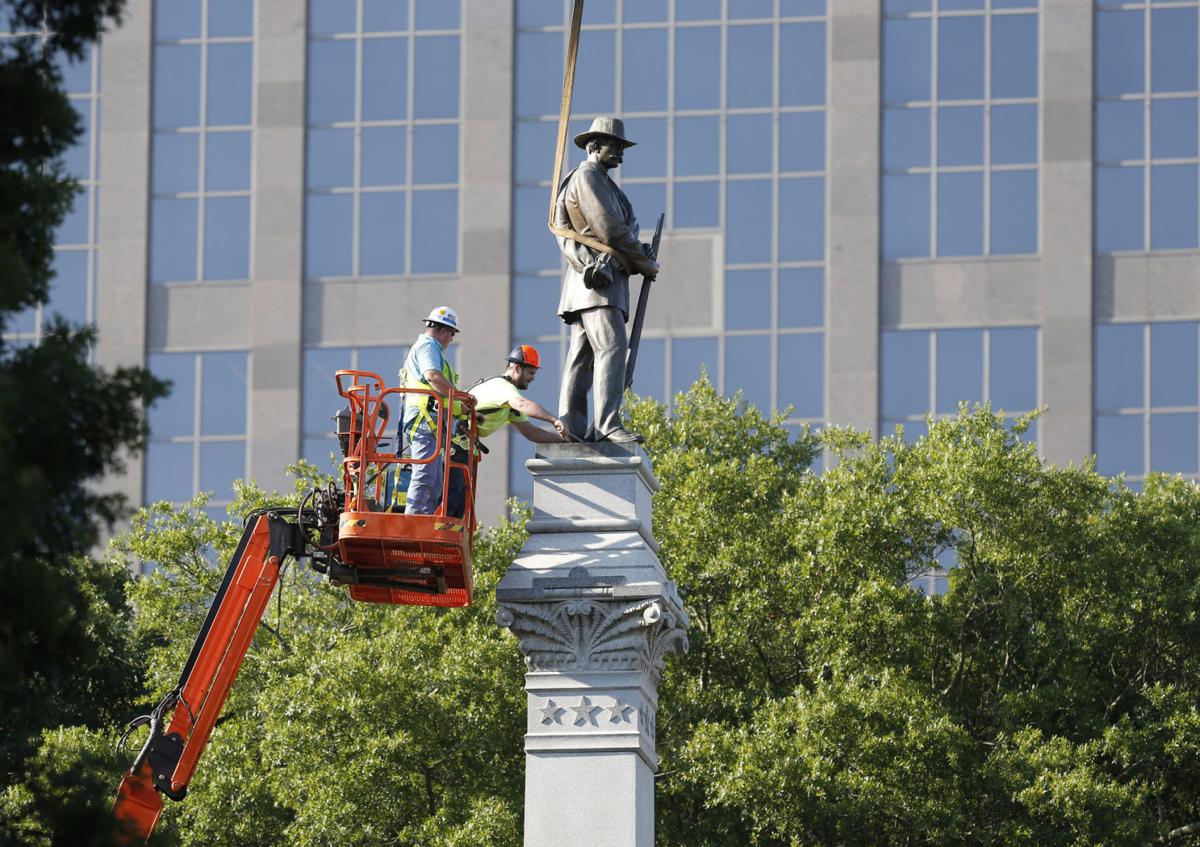 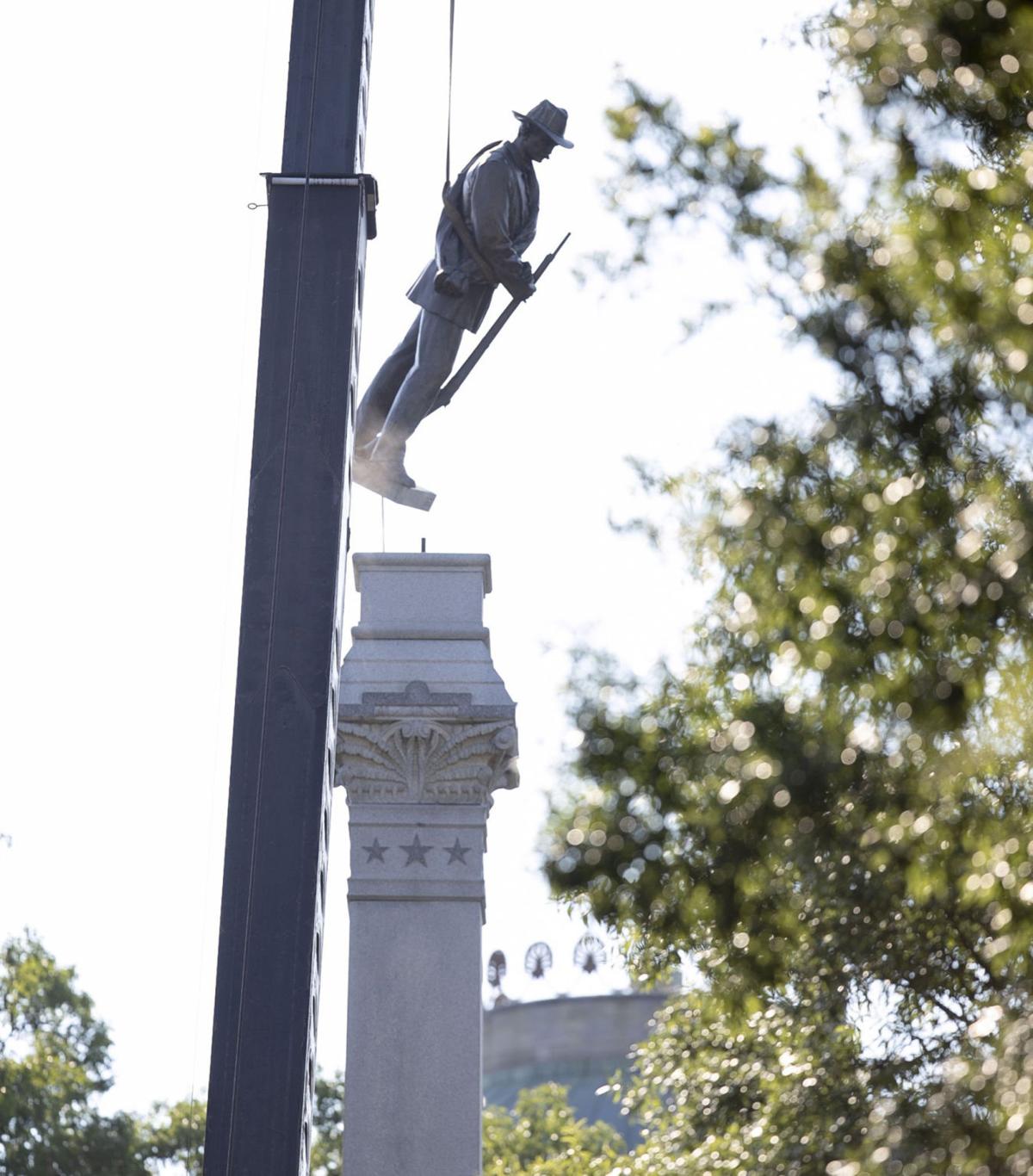 The Confederate soldier statue atop the historic Confederate monument on the west side of the North Carolina State Capital grounds is removed by a crane on Sunday, June 21, 2020 in Raleigh, N.C. (The Raleigh News & Observer/TNS) 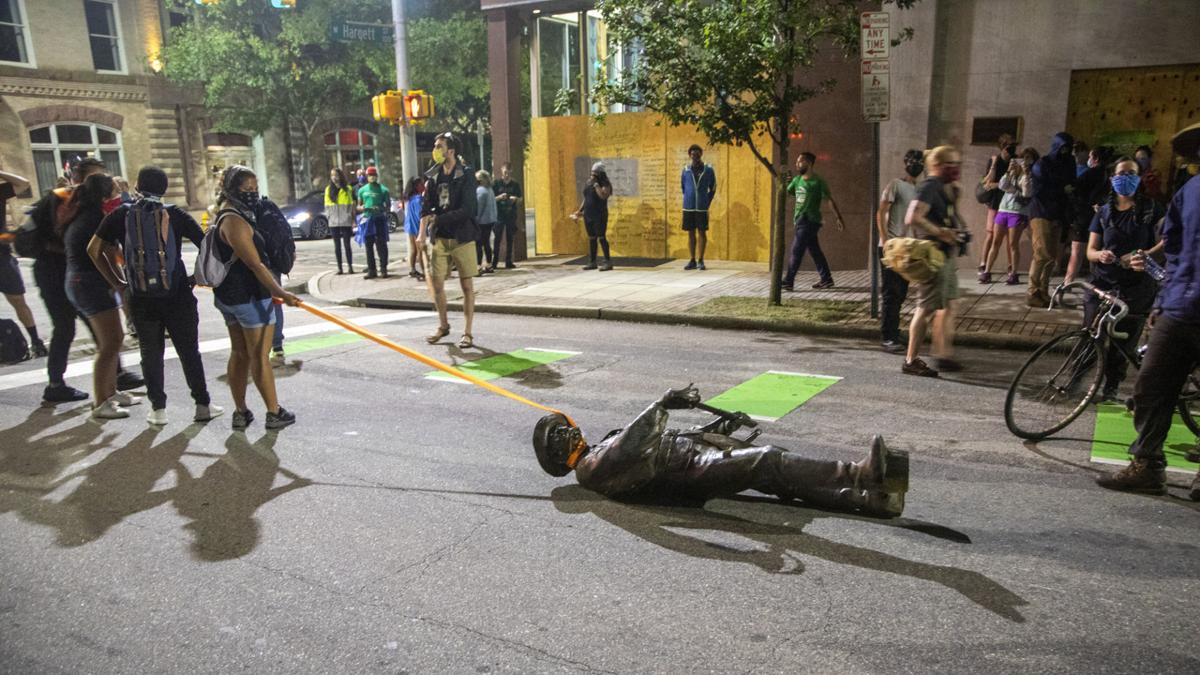 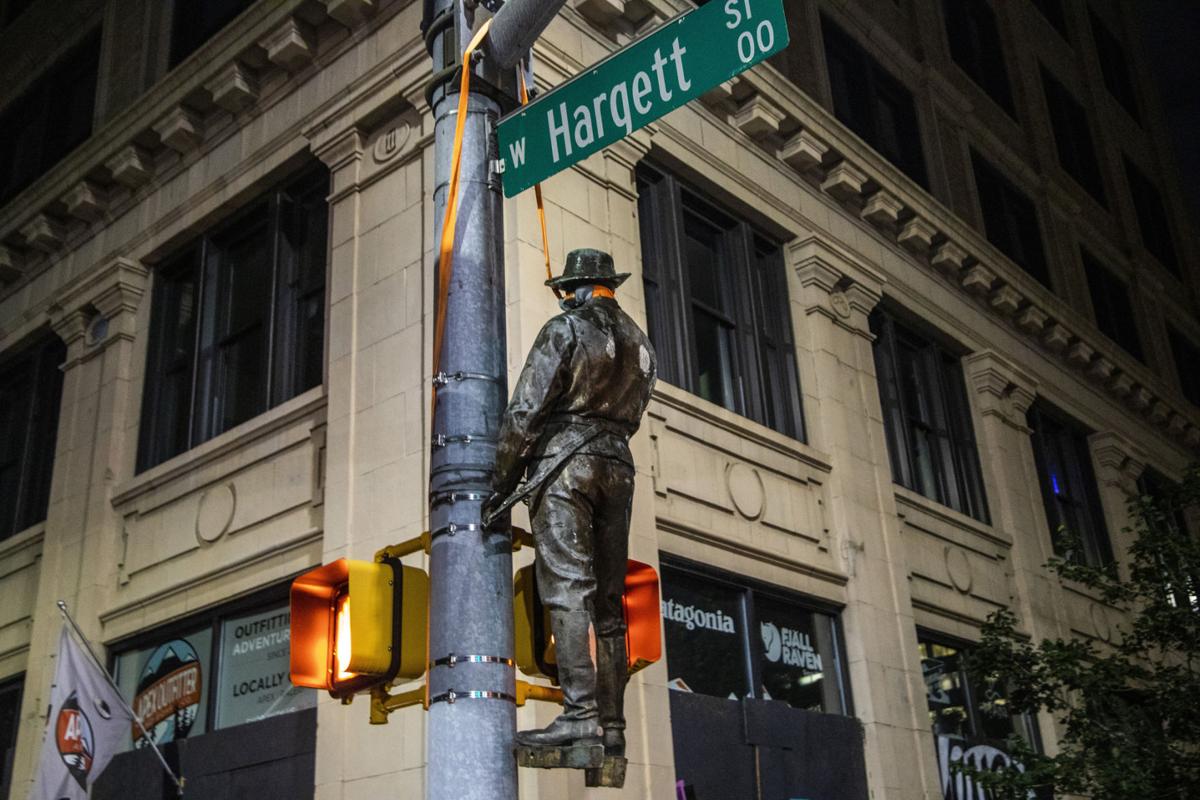 Protesters lynch a statue pulled from the Confederate monument at the State Capitol at the intersection of Salisbury and Hargett Streets in Raleigh, N.C., on Juneteenth, Friday, June 19, 2020. (Travis Long/The Raleigh News & Observer/TNS) 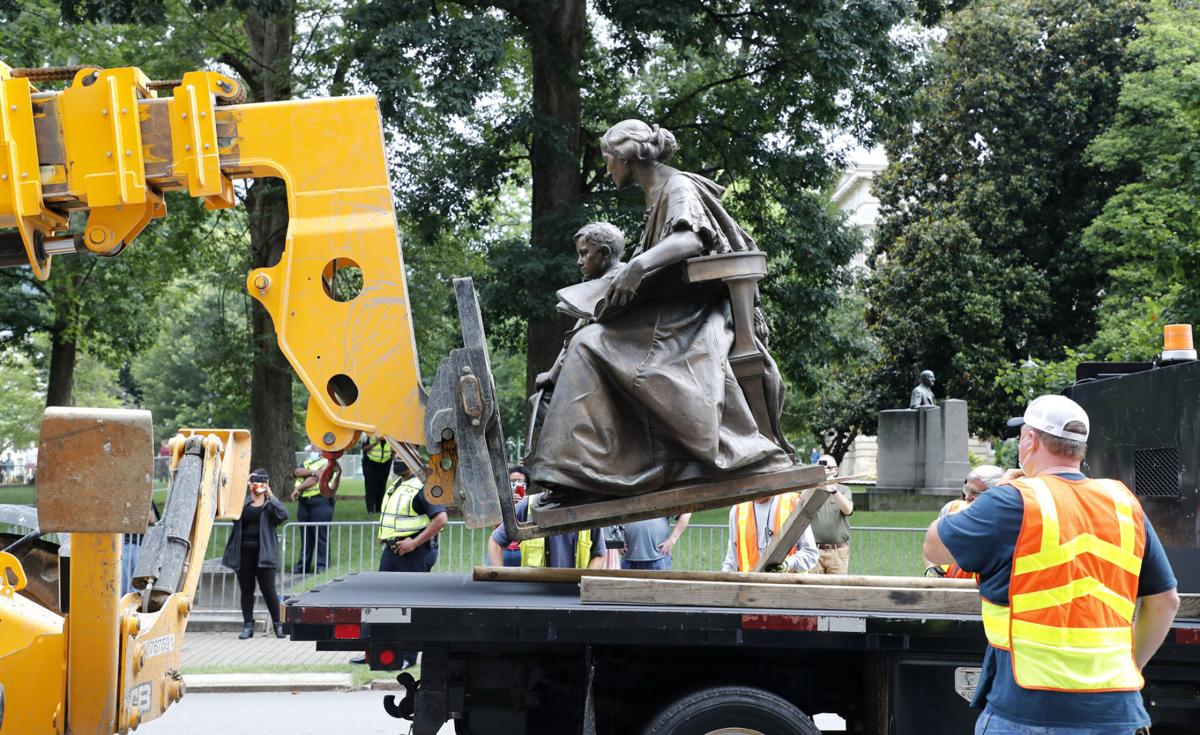 The Confederate monument on the west side of the North Carolina State Capital grounds is dismantled and loaded on a flat bed truck on Salisbury Street on Sunday, June 21, 2020 in Raleigh, N.C. (Robert Willett/The Raleigh News & Observer/TNS)

The Confederate soldier statue atop the historic Confederate monument on the west side of the North Carolina State Capital grounds is removed by a crane on Sunday, June 21, 2020 in Raleigh, N.C. (The Raleigh News & Observer/TNS)

Protesters lynch a statue pulled from the Confederate monument at the State Capitol at the intersection of Salisbury and Hargett Streets in Raleigh, N.C., on Juneteenth, Friday, June 19, 2020. (Travis Long/The Raleigh News & Observer/TNS)

Crews brought a crane, cherry picker and flatbed to disassemble the 75-foot obelisk on the Capitol lawn, which has stood since the late 1800s.

As they worked, a crowd gathered on Hillsborough Street, cheering and giving thumbs-ups to the workmen.

Michelle Collins, 36, a film student in Raleigh, came to watch the monument be dismantled to gather film footage.

Collins said taking the statue down may make some feel better but as a Black woman she was skeptical of it signaling significant change. Elected leaders need to change policies and the general population has to push them to take action, she said.

“There is still going to be racism out there,” she said, “with a statue or without it.”

Shana Tucker brought a cello and played duets with Carly Prentis Jones, who sang “We Shall Overcome” over the noise of the construction machinery.

“Finally,” said Tucker. “This is a big deal, and it seems like an authentic gesture. I’m proud of my city today.”

“We just wanted to breathe hope into the air,” said Prentis Jones. “I was born in Raleigh and I’ve seen these statues all my life. I’m glad we’re on the right side of history.”

About 100 spectators cheered, as the crane hoisted the 10-foot Rebel off his perch around 8:30 a.m. The statue dangled in the air, tottering on the heavy strap around its waist, and dropped to the flatbed.

“Look at that loser!” one onlooker yelled.

The Confederate statues have received renewed attention following the police killing of George Floyd in Minneapolis in May. Protesters in North Carolina and around the country have called for police reforms and an end to systemic racism.

Asking for the removal of Confederate statues has been one of protesters’ calls to action. Some cities have voted to remove them, while in other places, protesters have taken them down themselves.

Saturday, Gov. Roy Cooper ordered three Confederate monuments removed from the state Capitol grounds to protect public safety, he said in a statement, less than 24 hours after protesters pulled down the two bronze soldiers at the base of the Confederate monument, The News & Observer reported.

Crews removed the Wyatt Monument and the Women of the Confederacy statues Saturday morning.

“Monuments to white supremacy don’t belong in places of allegiance, and it’s past time that these painful memorials be moved in a legal, safe way,” Cooper said in his statement.

Angela Williams, 51, of Clayton, was one of the people watching the dismantling of the Confederate Monument on Sunday. Some may see the statue as heritage, she said, but they need to look at what it means to her as an African American.

To Williams, Confederate memorials are celebrating her ancestors being whipped, tortured and hung.

“How can you celebrate that heritage without looking at mine?” she asked.

But to watch it finally come down gives her a moment to exhale and hope that things will continue to get better.

“Someone is hearing us even though we are still trying to breathe,” she said.

Tony Maupin, 72, said his great-grandmother became the chair of one of the committees raising money for the Confederate Monument after her son died in a battle in 1862. Maupin said he was disappointed to see the statue go.

“It is another page of history that is being erased,” he said. “A lot of our state history is being sanitized by a new political party. I think good and bad history should stay in place so we can learn from it.”

Sunday morning, after removing the soldier from its perch, and after an hour of discussion, crews hammered a handle into the statue’s granite pedestal and hauled off the first section of stone, roughly the size of an easy chair.

“I think they should just topple it,” said Lisa Beebe, watching with her son, Cooper. “That would be more satisfying.”

Ten minutes later, the workers fastened straps around a second piece, roughly the size of a steamer trunk, and lifted it into the sky. The crowd cheered and offered commentary as people filmed the scene with raised phones: “Rest in pieces.”

Then the removal effort halted through the rest of the morning. Around 12:30 p.m. weights were added to the back of the crane — a counterweight to prevent it from tipping over — and a large hook was added to its line.

The cherry picker carried two men up to the top, where they drilled two rods into the granite. Yellow and red straps were attached to the rods, then placed over the crane’s hook.

Around 1:50 p.m., as a crowd of about 100 watched in anticipation, the crane started to pull. But as the crane jerked and shook, the straps broke loose, and the granite didn’t move. It was still in place at 2:30 Sunday afternoon.

The Confederate Monument honors fallen Confederate soldiers, according to Documenting the American South, an initiative by the UNC-Chapel Hill library.

Protesters took down the two bronze figures at the bottom of the memorial on Friday. The cavalryman was hung by its neck from a streetlight. The infantryman was dragged through the streets.

In North Carolina, those who have sought to remove the statues have been bound by a law passed in 2015 backed by the Republican-led General Assembly. Then-Gov. Pat McCrory signed the law, the “Cultural History Artifact Management and Patriotism Act of 2015,” which essentially banned the removal of Confederate statues from public property.

“If the legislature had repealed their 2015 law that puts up legal roadblocks to removal we could have avoided the dangerous incidents of last night,” Cooper said in his statement Saturday.

The News & Observer previously reported that the law was passed as a response to increasing calls to take down Silent Sam, the Confederate statue on UNC-Chapel Hill’s campus that protesters eventually took down themselves in 2018.

In August 2018, the North Carolina Historical Commission voted to keep three Confederate memorials on the Capitol grounds — the three that Cooper ordered to be removed.

Republican Lt. Gov. Dan Forest called the removal of the statues Friday night “utter lawlessness” in a press release Saturday morning. He is running against Cooper, a Democrat, for governor this November. He said Cooper deserves blame for the police not stopping the protesters.

“Last night’s destruction occurred on state property, right next to his office,” Forest said. “It is clear that Gov. Cooper is either incapable of upholding law and order, or worse, encouraging this behavior.”

“In working to strategically balance the public’s safety and the safety of the officers, the chief determined it was best to not re-engage on the statue and as a result no one was seriously injured,” DPS spokeswoman Pamela Walker wrote in an email.

This isn't going to stop with Confederate Statues... it's morphed into Columbus, Queen Isabella, Francis Scott Key...and seems to be moving towards anyone who ever owned a slave... When do we remove those involved with the Indian Removal Act in 1830.... and the numerous other acts designed to enslave native americans...which includes Presidents...some of which were also slave owners.. During Lincoln's watch... 1863, the Lincoln administration oversaw the removal of the Navajos and the Mescalero Apaches from the New Mexico Territory, forcing the Navajo to march 450 miles to Bosque Redondo—a brutal journey. Eventually, more than 2,000 died before a treaty was signed...

Whether the statue celebrates the person...or reflects our heritage..is in the eyes of the beholder... Statues aren't causing this....individual values are...re-read MLK's speach..

Hmmm, the mob probably wants to replace these monuments with Marx or Lenin!