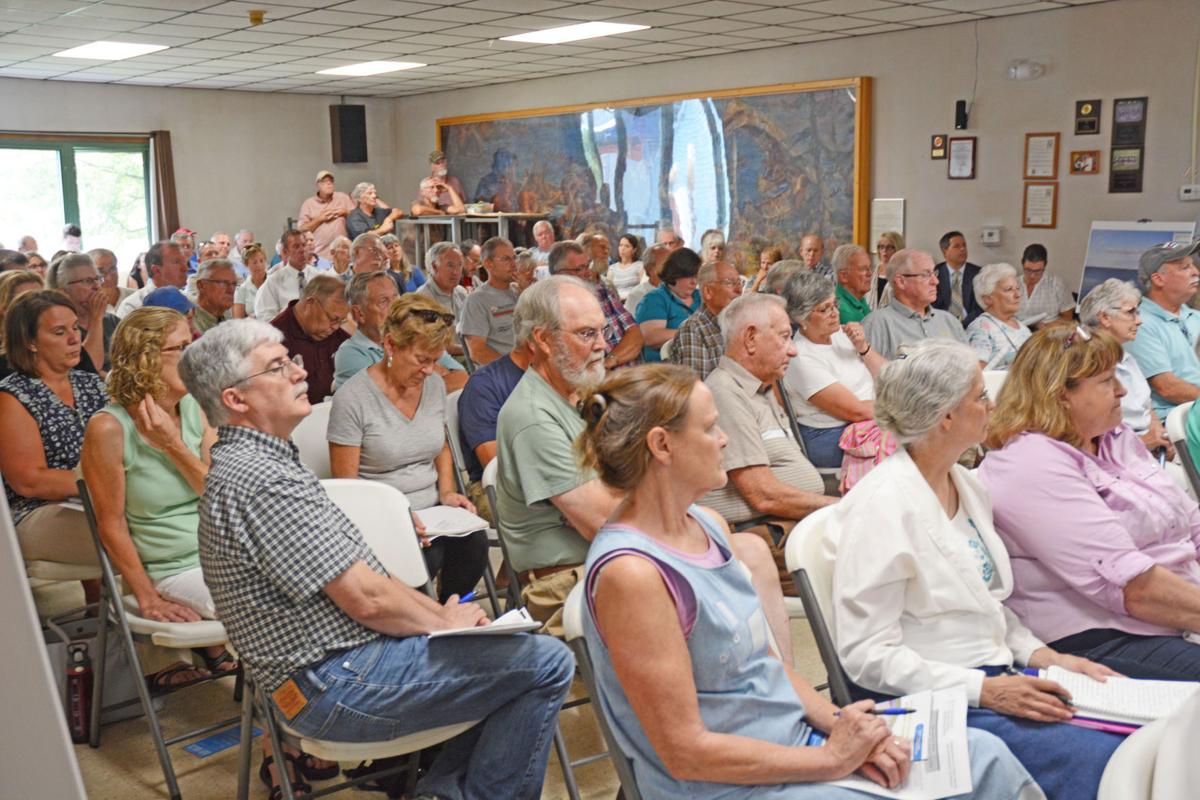 A crowd of about 150 people were at the recent public hearing on the Galloo Island wind project in Henderson. Jefferson County has sent a letter to the Public Service Commission clarifying its policy on wind farm tax abatement. 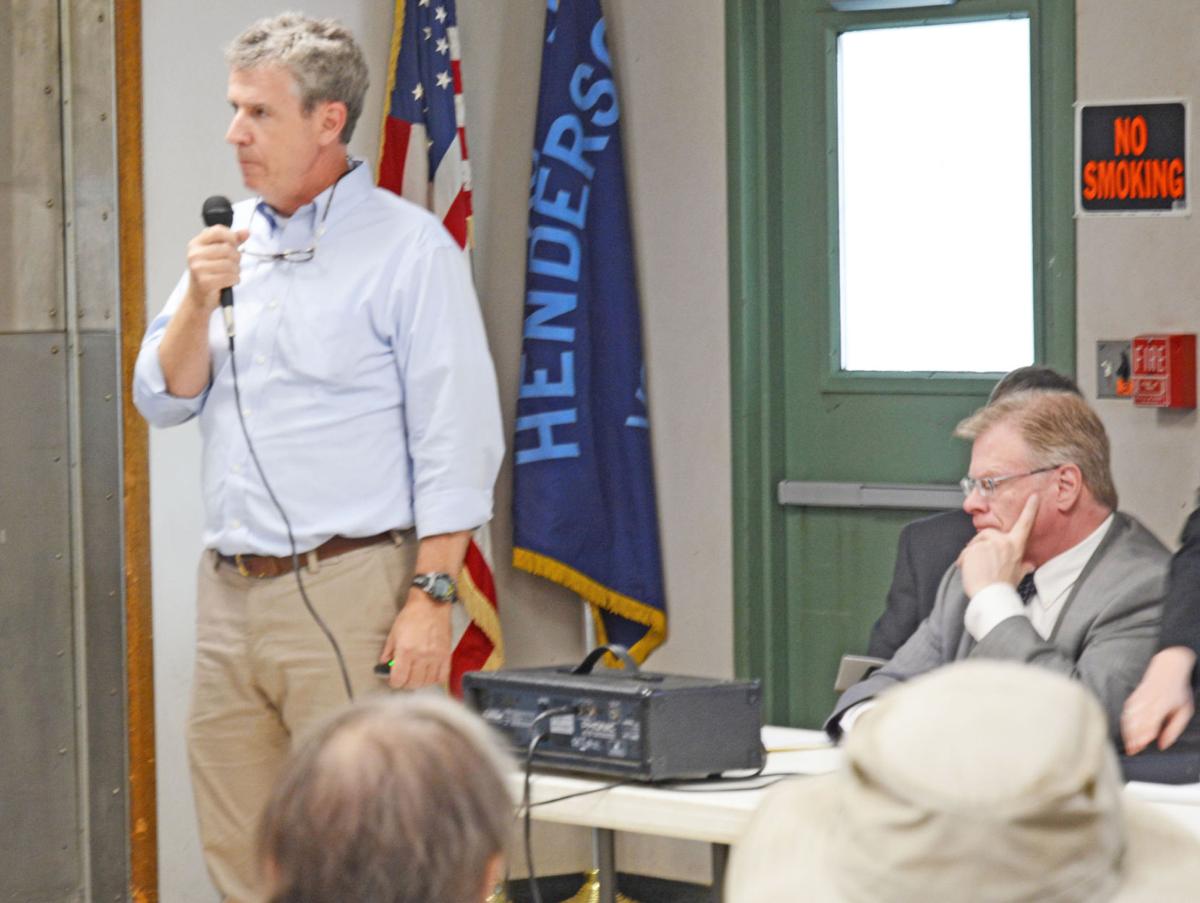 Neil T. Habig, project manager for the Galloo Island wind project, speaks during an informational session held by the state siting board recently in Henderson Harbor.

A crowd of about 150 people were at the recent public hearing on the Galloo Island wind project in Henderson. Jefferson County has sent a letter to the Public Service Commission clarifying its policy on wind farm tax abatement.

Neil T. Habig, project manager for the Galloo Island wind project, speaks during an informational session held by the state siting board recently in Henderson Harbor.

Jefferson County, responding to a document filed with Public Service Commission staff by Apex Clean Energy, has clearly set forth its expectations on any payment-in-lieu-of-taxes agreement reached on the proposed Galloo Island wind project.

The issue arose at a recent public hearing on the project in Henderson, when resident Briggs McAndrews spoke, among other things, to the financial aspects of the proposal, urging all the taxing entities to reject the company’s likely PILOT request, limiting any such agreement to five years, starting at 50 percent of assessed value and declining by 10 percent of value each year until the project reached full assessment in year six.

In a filing with PSC staff as part of the Article 10 review of the proposal, project manager Neil T. Habig wrote “Given the general level of reception received from the other involved tax jurisdictions and the county’s resolution, it appears remote that the local taxing jurisdictions would not execute a PILOT agreement.”

Apex refers to a figure of $7,500 per megawatt as an average state PILOT figure.

Jefferson County Legislature Chairman Scott A. Gray responded to the Apex filing by clarifying that while the county’s resolution on PILOTs for wind projects compels the completion of such an agreement, it also clearly states “That policy requires any payment through a PILOT agreement be equal to what normally would be collected as full taxation.”

Neil T. Habig, Galloo project manager for Apex, said it is too early to respond to the county’s comments.

“I would prefer to defer our response to this until after it is properly filed with the (Public Service Commission),” Mr. Habig wrote in an email. “That gives people an opportunity to appreciate the full context of the county’s letter.”

A chart in the county’s response points out that full taxation, based on similar wind farm assessments in Belmont’s Jericho Rise project and in the portion of Maple Ridge Wind Farm in Harrisburg, assessments per megawatt range from $1,386,666 per megawatt to $1,696,969 per megawatt. Based on the lower value, annual taxes due from the project at full assessed value would be $1.08 million for the county, $272,000 for the town and $1.78 million for the Sackets Harbor Central School District, totaling more than $3 million.

At the PILOT figure suggested by Apex, the total to be split by all three taxing districts would be $814,000.

The county’s PILOT policy does not control the values accepted by the town and school district. Sackets Harbor Central School District has reviewed the request without acting on it.

According to the PSC document filed by Apex, “The Sachets (sic) Harbor Central School District advised they would be holding a school board meeting on August 16, 2018 to discuss implications of the tax cap and school funding consequences of a PILOT agreement.”

The school district’s website does not include any meeting minutes beyond Aug. 7, although a meeting was scheduled for Aug. 15.

Under the state’s tax cap law, taxing districts must “add any PILOTs that were receivable in the base year. The total amount of PILOTs receivable is to be included in the calculation of the tax levy limit. No adjustment is permitted.”

This is because PILOT agreements are considered to be general, not property tax, revenue. At the Apex requested rate of $7,500, the district’s revenue of $456,120 would be added to revenues, thus affecting the tax-cap formula.

But under full valuation at a rate slightly below $1.4 million per megawatt, according to the county’s calculations, the district would receive $1,780,661 annually at today’s school tax rate. Since it would be applied to property tax revenues, it would reduce the amount of the tax levy, helping rather than hindering the district’s ability to stay under the cap.

The tax-cap law does provide for a growth adjustment when assessments increase because of notably higher assessments, but it would almost certainly be more than offset by receiving $1.7 million.

To date, no commercial wind project in New York state has been built without a PILOT agreement that provides significant property tax relief.

Anne Reynolds, executive director of the Alliance for Clean Energy New Yorkm wrote in a 2017 email to the Times, “Nearly every operating wind project in NYS has a PILOT, as do most power plants of any type. Many other types of significantly-sized development projects in NY have PILOTs too.”

The county passed its policy on PILOTs for commercial power projects in July 2016. The Galloo Island project is the first to request a PILOT since the county’s action.

Tax revenues by the proposed Apex wind farm PILOT, vs. at full value: