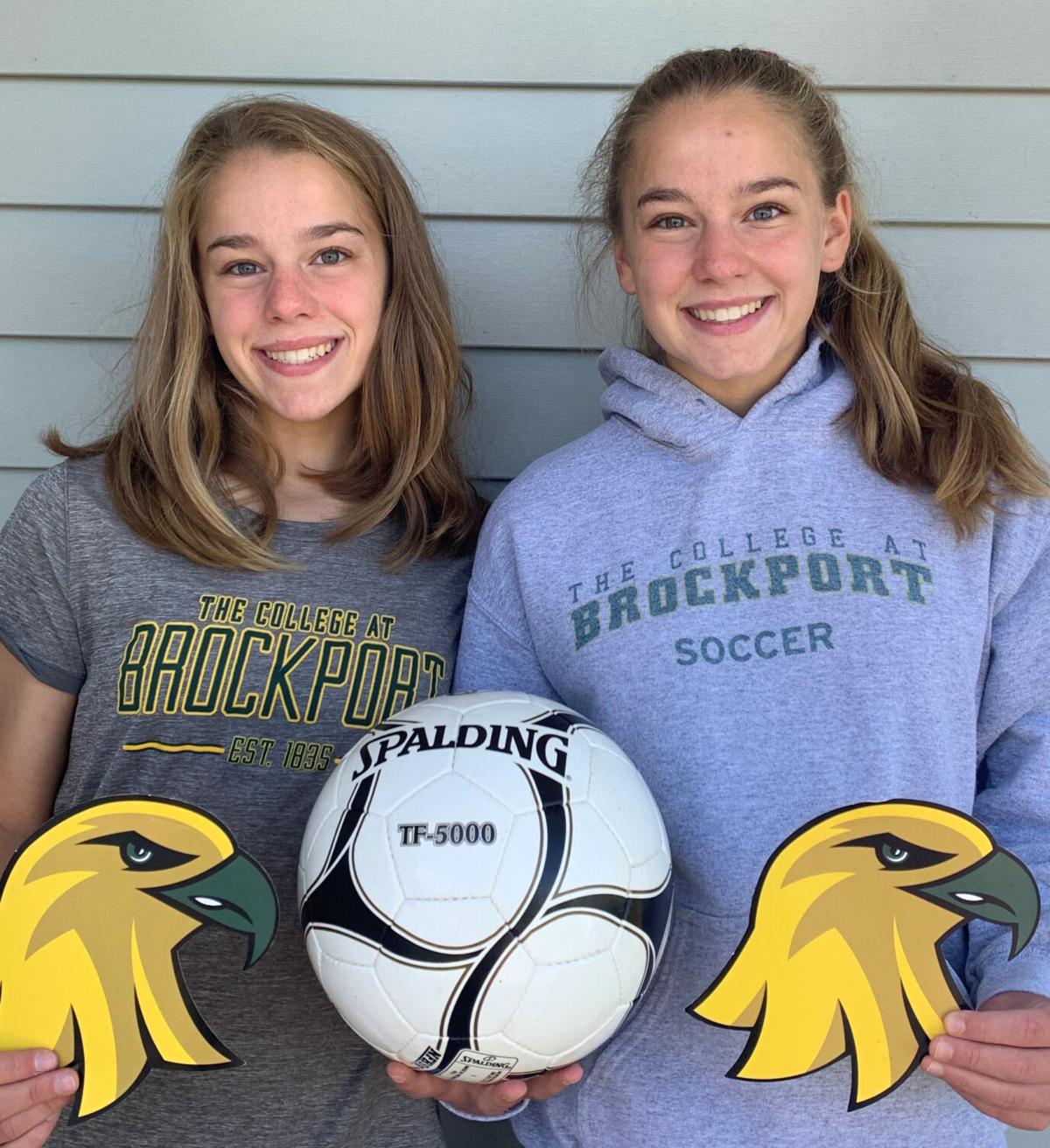 Twins sisters Kaylie (left) and Allyson (right) Isereau are committed to play college soccer together for The College at Brockport after graduating from Central Square in June. Provided photo 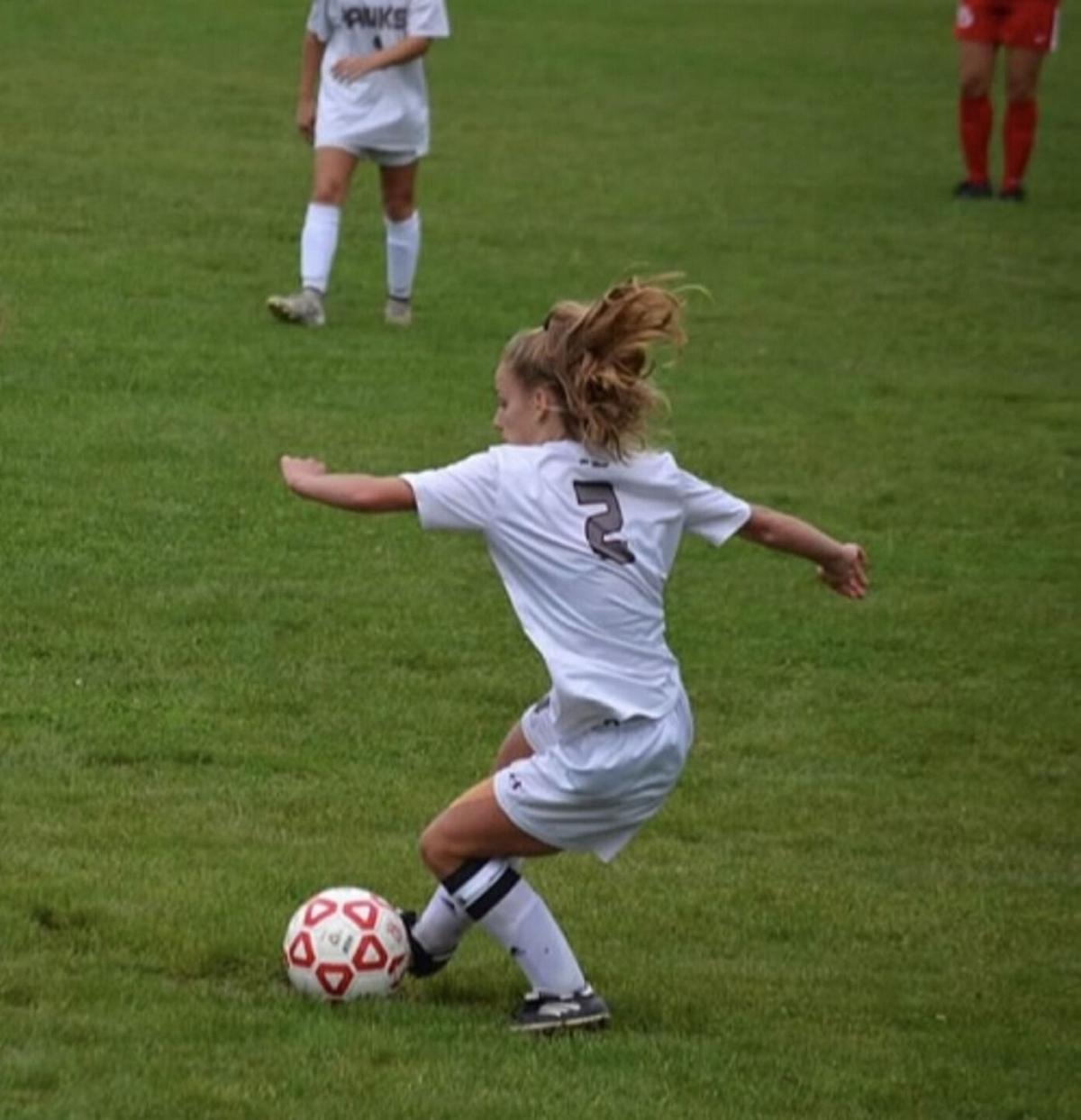 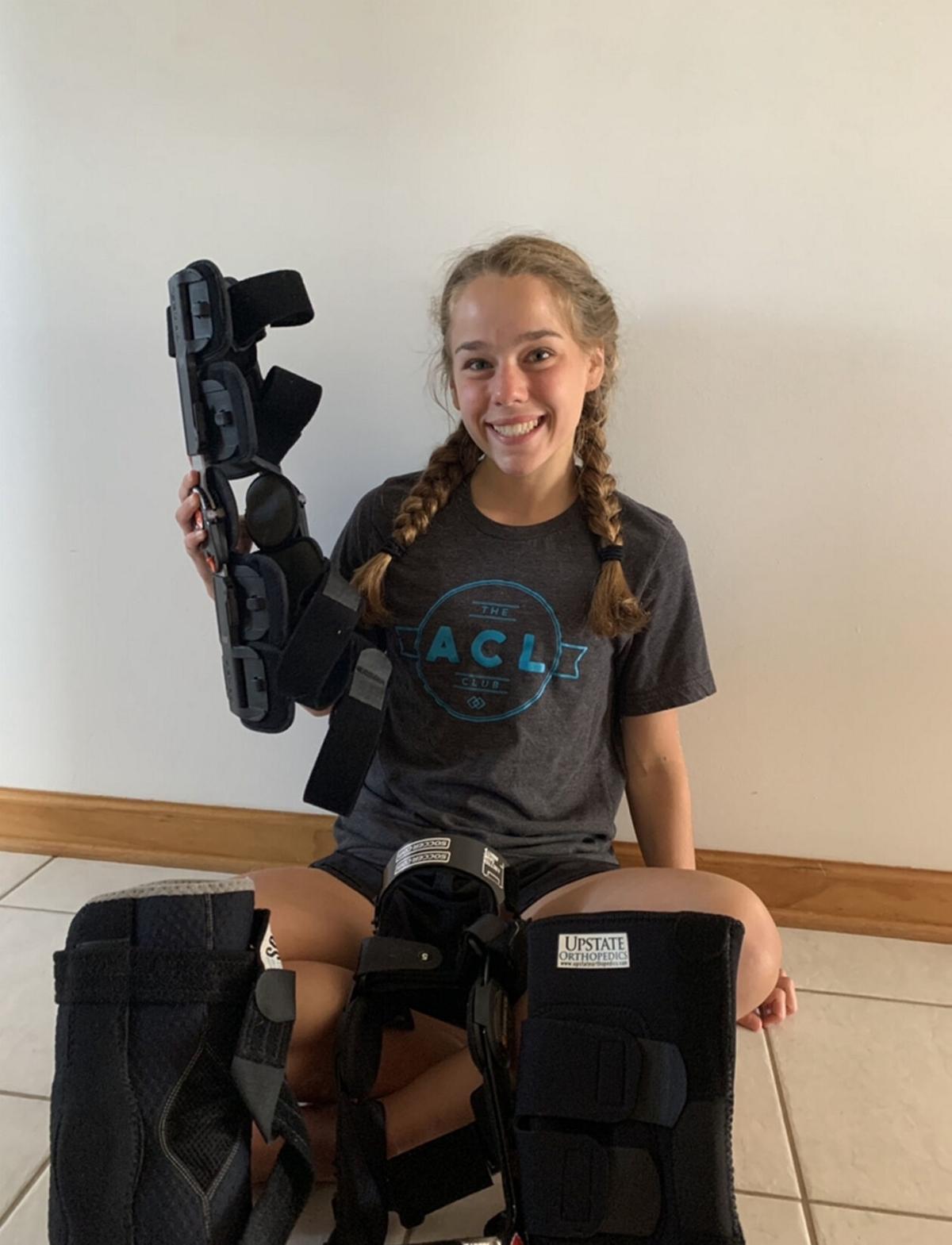 Recent Central Square graduate and eventual The College at Brockport soccer player, Kaylie Isereau, with her knee braces after suffering a torn ACL in each knee in consecutive summers in 2018 and 2019. Provided photo

Twins sisters Kaylie (left) and Allyson (right) Isereau are committed to play college soccer together for The College at Brockport after graduating from Central Square in June. Provided photo

Recent Central Square graduate and eventual The College at Brockport soccer player, Kaylie Isereau, with her knee braces after suffering a torn ACL in each knee in consecutive summers in 2018 and 2019. Provided photo

CENTRAL SQUARE — Their prolonged wait has been further delayed by the COVID-19 pandemic, but Allyson and Kaylie Isereau remain upbeat as they anticipate taking the soccer field to compete together again.

The identical twin sisters, who graduated from Central Square-Paul V. Moore High School in June, are each committed to play women’s soccer for The College at Brockport. The SUNYAC fall sports season was suspended in July until at least January 2021 due to the virus, but the Isereau duo will join the team on campus today and soon begin practice through the coming months.

The standout midfielders — daughters to DJ and Kristen Isereau — are eager to eventually realize their shared dream to play collegiate soccer together despite the recent postponement of their freshman fall campaign.

That announcement was the latest hurdle for Kaylie Isereau, who missed her final two high school seasons for the Redhawks after suffering a tear to the anterior cruciate ligament in each knee during consecutive summers.

Allyson and Kaylie had played on the same scholastic and travel soccer teams since they were introduced to the sport at age four and enjoyed two varsity seasons together as Central Square underclassmen prior to Kaylie’s knee injuries.

“It had always been a dream of ours to be on the soccer team together in college and keep playing as sisters,” Allyson Isereau said. “Even though we got a notice that our fall season is canceled, we’re still going to be able to practice this year, and even just putting our cleats on together again and talking soccer, trying to compete against each other and run faster than each other, it has been so great. It’s bringing back old memories and it’s amazing.”

Allyson Isereau finished with four goals and nine assists as a fourth-year midfielder last season, helping Central Square to a team-record 16 wins and the program’s first-ever trip to a Section 3 championship game. She scored four goals to go with four assists the year prior, while Kaylie remained a fixture in the locker room each season to mentor and support her teammates. Kaylie Isereau tore the ACL in her right knee in July 2018 to miss her junior year and suffered a tear of the left ACL the following summer.

Allyson and Kaylie each finished with five goals during their sophomore season in fall 2017 — the last time they played a scholastic soccer game together — and each garnered Salt City Athletic Conference All-Star honors.

The tight-knit twins have been aiming to recapture that form to bring to the Golden Eagles since Kaylie Isereau was fully cleared for soccer activities in March and dedicated their summer toward gearing up for the next endeavor.

The Isereau sisters attended small pod practices of five players or less conducted by their travel team, Arsenal Academy, and have stayed active during their downtime by hiking and kayaking.

“It’s really fun being able to do everything we used to do together, but also to have something new to look forward to and move on from high school and start our new adventure when it comes to soccer,” Kaylie Isereau said.

Allyson Isereau committed soon after they went for an overnight campus visit together in July 2019 and her sister followed about a week later after contemplating her future in the sport shortly after her second knee surgery.

“(Idland) was so supportive and still wanted me to play for them, and I wanted to be with Allyson, so I thought that this would be a good choice for me and I felt like, if I don’t feel ready to play I can always be a practice player, but here we are now and I think I’m ready,” Kaylie Isereau said.

“I felt like I didn’t want my soccer career to end, like I had something more to prove, and all the girls at Brockport were super nice,” she added. “I connected with another girl on the team who had torn her ACL so we’ve been talking, giving each other advice, and I was just like: ‘OK, I need to go here and prove to myself that I can play soccer again and have as much fun as I used to.’”

Allyson Isereau plans to major in biology and chemistry with the goal to become a dentist, having already job-shadowed her uncle in the profession and enjoying the experience.

Kaylie Isereau will major in exercise science and hopes to eventually work as a physical therapist, inspired to help athletes work back from the type of injuries she has endured. She spoke often to her physical therapist — Chris Hall at Syracuse Orthopedic Specialists — about the field and became intrigued by observing the SOS staff work with a variety of patients, from knee replacements to shoulder rehabilitations.

“I would go to physical therapy and unlike most people, I actually loved physical therapy,” Kaylie Isereau said. “It was something fun for me to do because I love staying active and I couldn’t really do anything else.”

The Isereau sisters were undergoing all-out preparation for their collegiate debut when they received word that SUNYAC had opted to suspend all sports until at least January.

After a few initial tears, each quickly took the optimistic view of being able to slowly ease into their college surroundings and be introduced to the new program, coaches, and teammates.

For Kaylie Isereau, the postponement offers added time to get back to her physical peak and feel comfortable competing on the field again in a low-pressure environment coming off two knee surgeries.

“There were some tears but we did some Zooms with the team and after realizing that we’re going to be able practice and do things as a team, like weight-lifting or team bonding, it seems like we’ll be together and still playing soccer, there just won’t be the competitiveness of it,” Allyson Isereau said. “We just have to have a positive mindset and hope that everything turns out OK.”