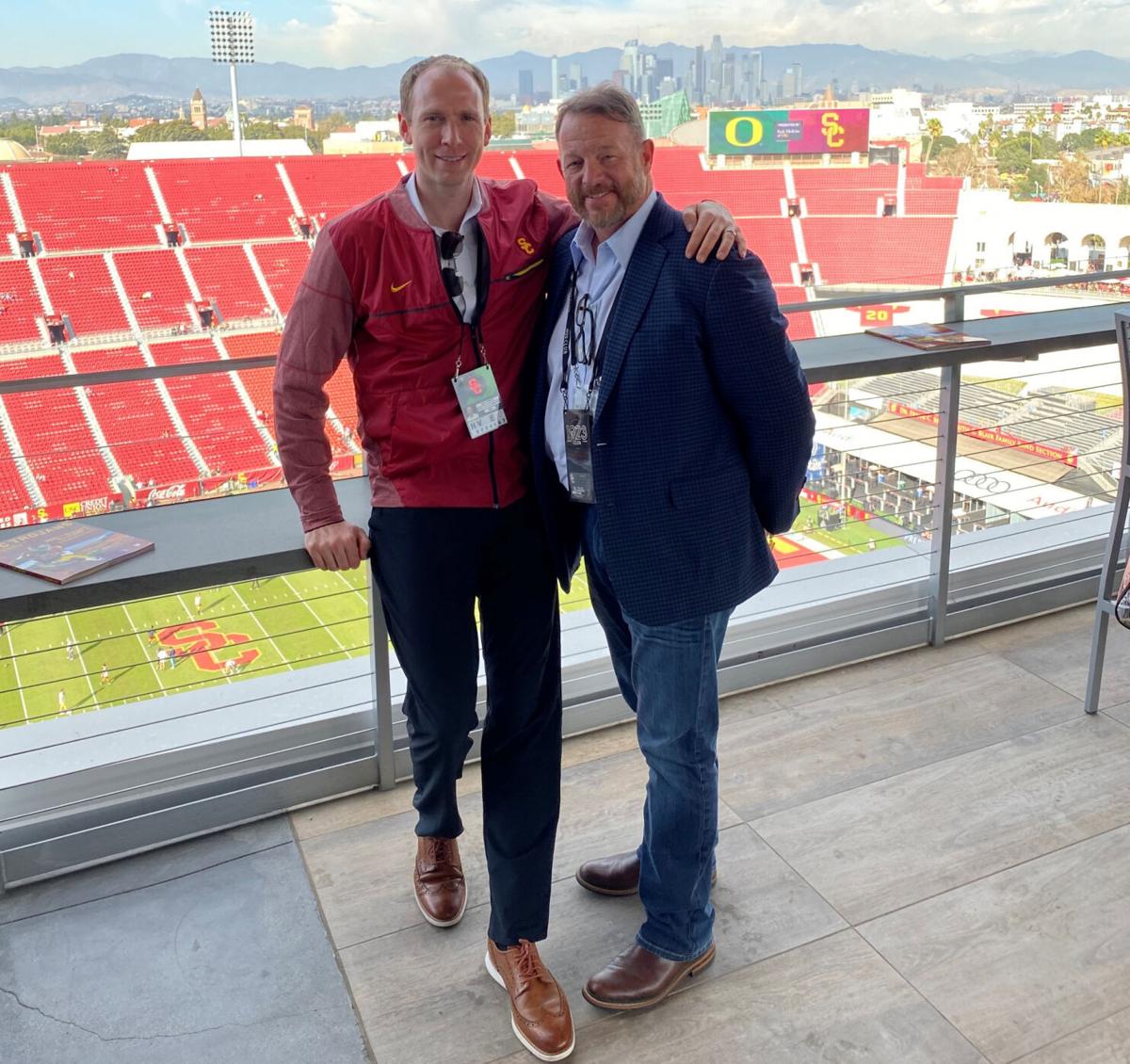 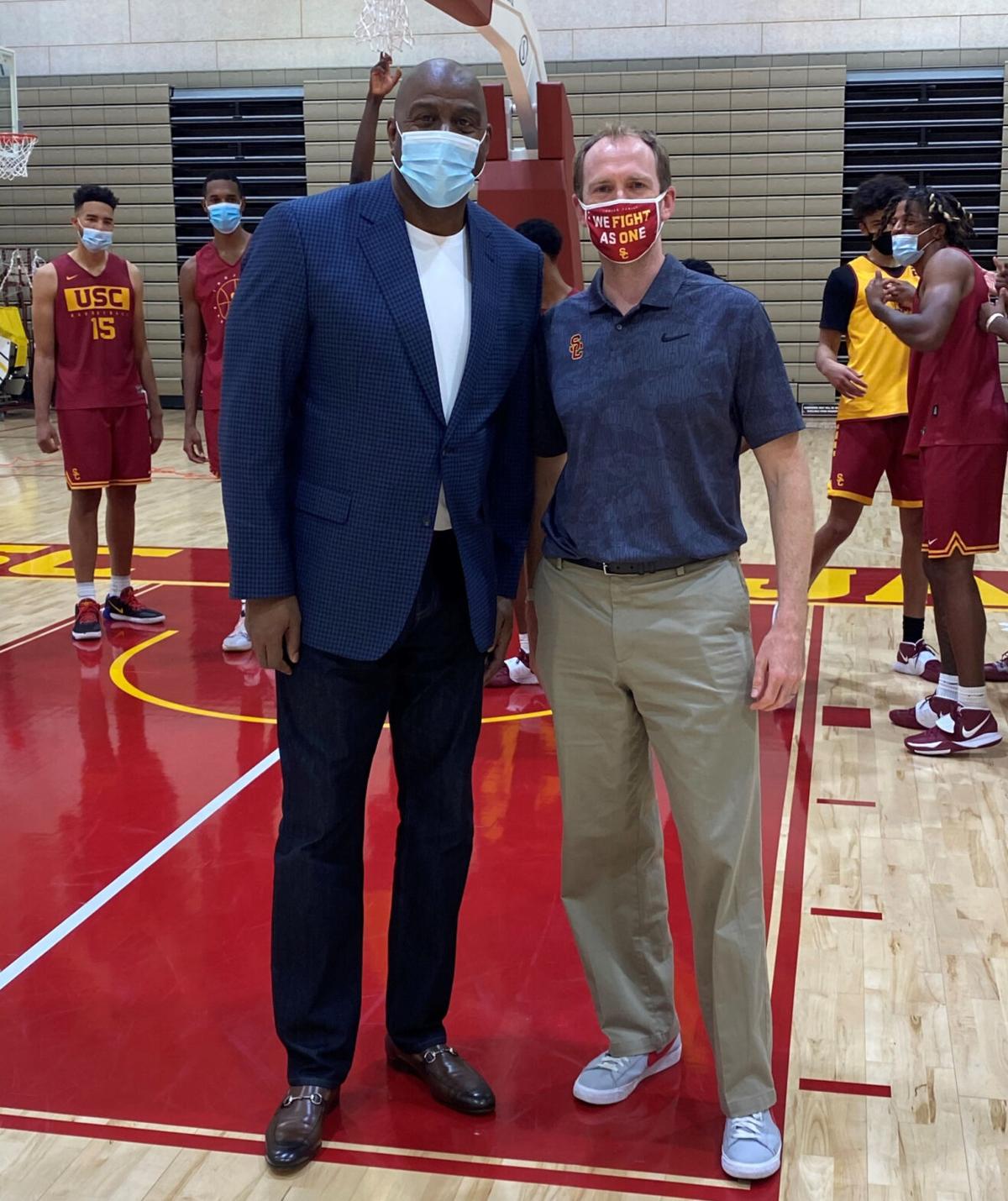 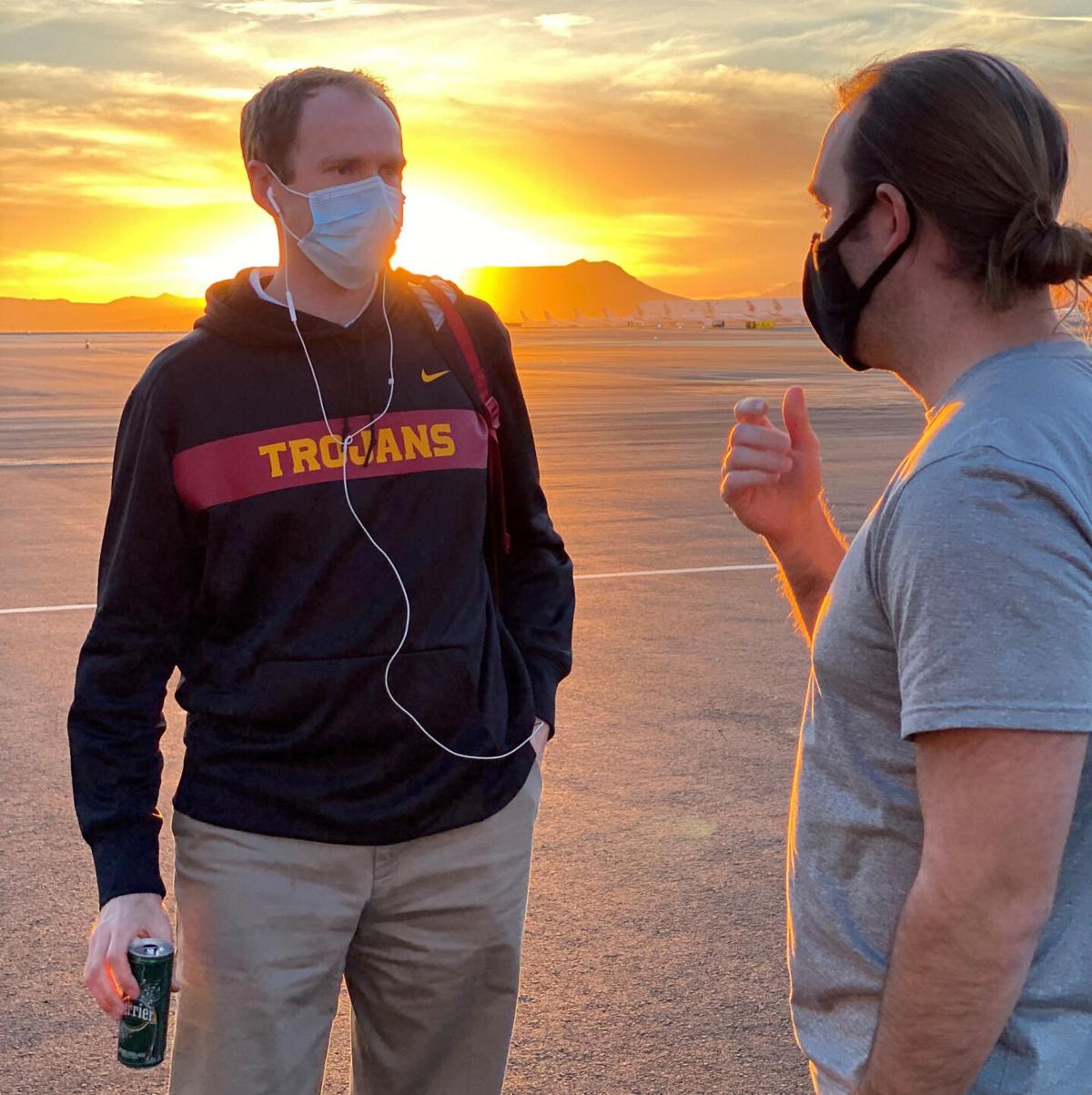 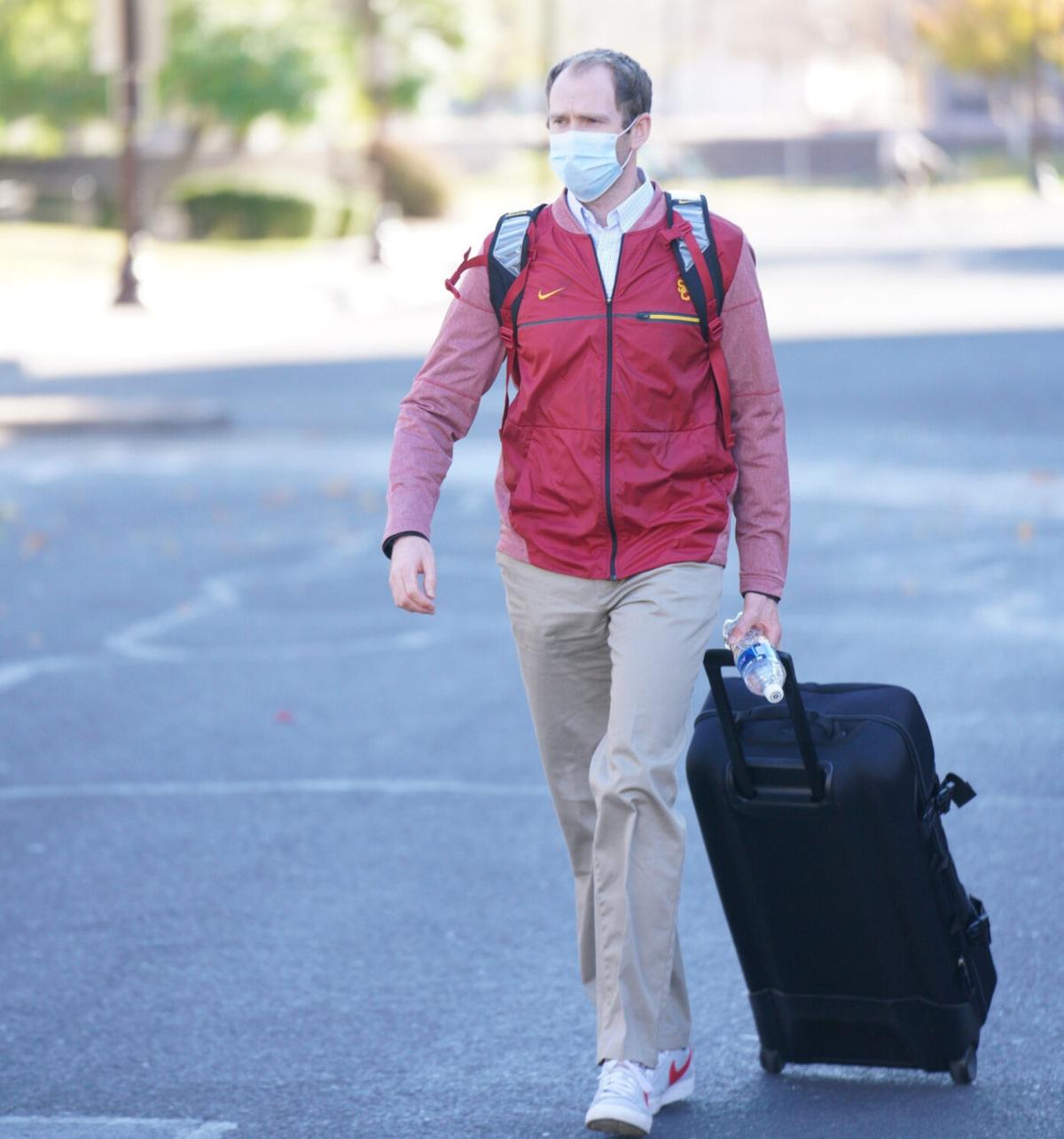 LOS ANGELES, Calif. — Paul Perrier shifted career paths upon graduating from Oswego State University but gained the skills that are helping him thrive in college athletics administration while contributing to a Frozen Four campaign for the Lakers.

Perrier is the Deputy Athletic Director for the University of Southern California in Los Angeles, beginning his second stint at the prestigious Pacific-12 Conference institution in October 2019.

The 2005 Oswego State graduate and native of Aurora, Ontario, Canada, arrived on the area campus with intentions to prepare for a medical career but left with late-developing plans to attend law school.

In the process, Perrier helped the Lakers men’s ice hockey team advance to its second NCAA Division III national title game in 2003 while laying the foundation for his future, learning to be an effective communicator and building relationships with a wide array of cohorts.

“It really forced me to define what’s important to me, what do I want to focus my energy on, a big thing was relationship-building,” Perrier said of his Oswego experience. “I had very different conversations whether I’m sitting next to a colleague in chemistry class or going and talking to a guy on the hockey team, or even talking to a professor. You have to be able to effectively send the same message to different people with different sets of motivations.”

In his current position, Perrier oversees many of the internal operations of USC Athletics and is mostly focused on areas that directly support student-athletes such as the medical, training, strength and conditioning, and nutrition staffs. He also oversees USC’s sports administration program which encompasses the oversight, management, and support of all Trojans athletics teams.

Perrier previously worked in the Office of Athletic Compliance for USC from 2009-15, finishing as associate vice president, before working four years for Rutgers University as Senior Associate Athletic Director and Chief Compliance Officer.

Perrier said the decision to return to USC was easy after an enjoyable first tenure and their willingness to take a chance on him from the onset. The university helped Perrier through the process of obtaining his work visa after an initial denial and first hired him while he was completing a postgraduate internship for the NCAA.

“The Trojan family is such a unique place with its heritage and competitive success, also while being a top private institution in the country and the world,” said Perrier, who lives in Redondo Beach, Calif., with his wife, Lindsey, and their two sons, Cole and Henry.

“I left here once and it’s going to be really hard to leave here a second time,” he added. “It really is a special place. In the same day just in terms of student-athletes, you could be interacting with Olympians, people who are going to be professional athletes or people who are going to be doctors, politicians, teachers. There’s just such a wide range and array of people you get to interact with and help along their path while they’re at USC.”

Over the past 10 months, Perrier has channeled the steady, determined approach with which he once helped guide the Lakers on the ice to help his department operate amid the COVID-19 pandemic.

Learning to work with new staff members remotely has been a key adjustment, Perrier said, but he has kept perspective on the importance of safety in the series of temporary changes thrust upon college sports.

“Our focus has always been the student-athletes and supporting them and focusing on their health and safety, so that piece hasn’t changed, just the specifics of what that looks like,” Perrier said. “Typically, it’s mental health, athletic training, nutrition, and strength and conditioning when you’re on campus. Now, it’s really pivoted to making sure they have all the resources in terms of travelling, isolating, testing, all those things.”

Oswego State men’s hockey coach, Ed Gosek, said that he could think of few better examples for young athletes to imitate than Perrier. Gosek took over the head role from George Roll in 2003 when the latter left to become coach at Division I Clarkson midway through Perrier’s playing career.

Gosek noted his dedication in the classroom — Perrier was a presidential scholar and the recipient of the Chancellor’s Award for Student Excellence at Oswego — along with his contributions on the ice. The 6-foot-2, 200-pound forward finished with 18 goals and 36 assists in 107 career games from 2001-05.

“He exemplified student-athlete, he got it,” Gosek said. “He had fun, but he balanced academics, athletics, and he was an important part of our program. … I think his love for athletics and sport, competition, just caring for athletes, I really think that’s a big part of it for him.”

Gosek recalled conversations with Perrier late in his Lakers career about his shift in mind-set regarding career goals.

The pre-med chemistry major took a minor in forensics and was drawn to the required public justice classes. He changed course during his senior year, ultimately choosing a law school in late summer 2005 after he graduated from Oswego. Perrier later earned his Juris Doctor from the University at Buffalo Law School.

“That’s one of the great things about college, figuring out what your path is and what you want to do, what you’re passionate about,” Perrier said. “I didn’t decide that until my senior year at Oswego, or even started studying for it, so studying for the LSATs (Law School Admission Test) on bus rides with the boys wasn’t always the easiest.”

Perrier spoke fondly of his playing memories at Romney Field House, the former home rink of the Lakers, and his deep admiration for coach George Roll, who was largely responsible for getting Perrier to Oswego. He can still replay the emotional scene in the locker room when Roll told the team he would be leaving to coach Clarkson following Oswego’s loss in the 2003 NCAA Division III national final.

Gosek recalled a playoff game in which an airborne puck hit the roof of Romney Field House and struck Perrier’s mom in the head, but she refused to be rushed to the hospital until the game was decided, displaying the same tenacious spirit as her son on the ice.

Perrier’s happiest moment as a Laker came when he helped Oswego beat rival Plattsburgh in 2003 en route to the Frozen Four to capture the program’s first SUNYAC championship in 12 years.

“It’s one thing to win a championship but then to win it with your friends, family, fans, the local community,” Perrier said. “It was really special because they hadn’t won (SUNYAC) in a while, and beating Plattsburgh was even better.”