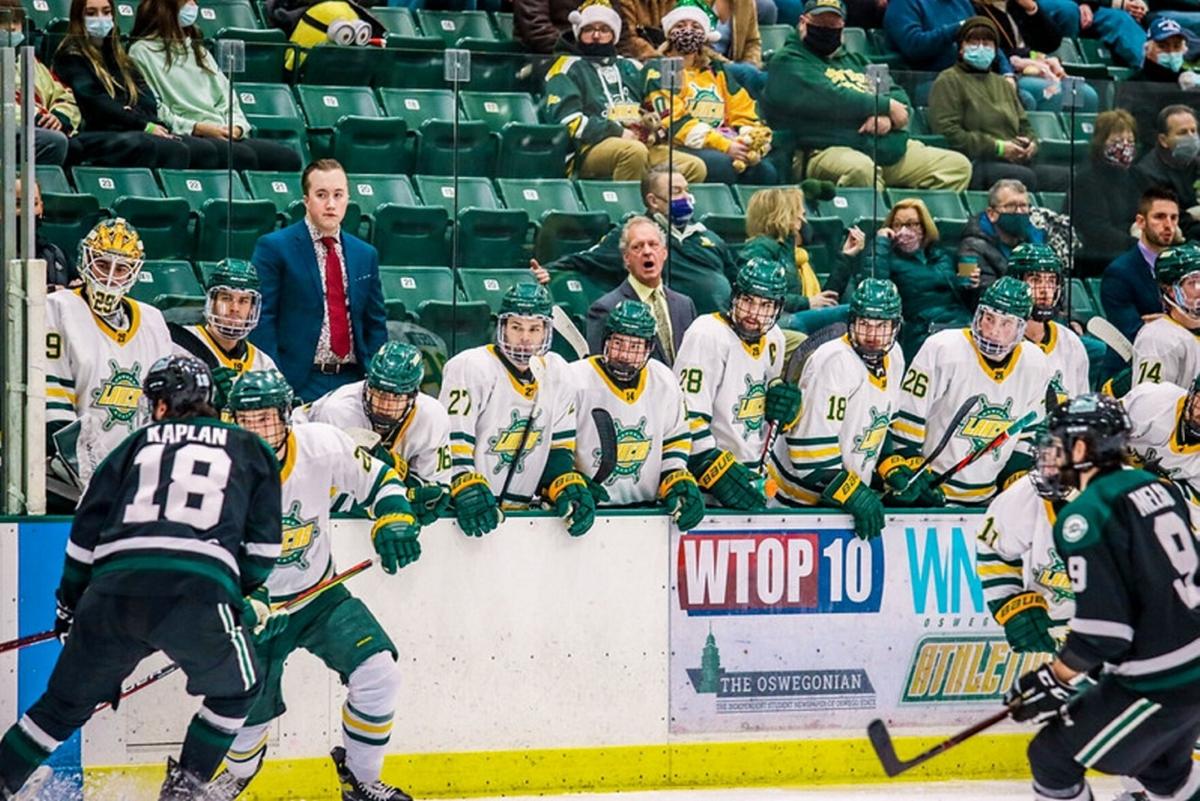 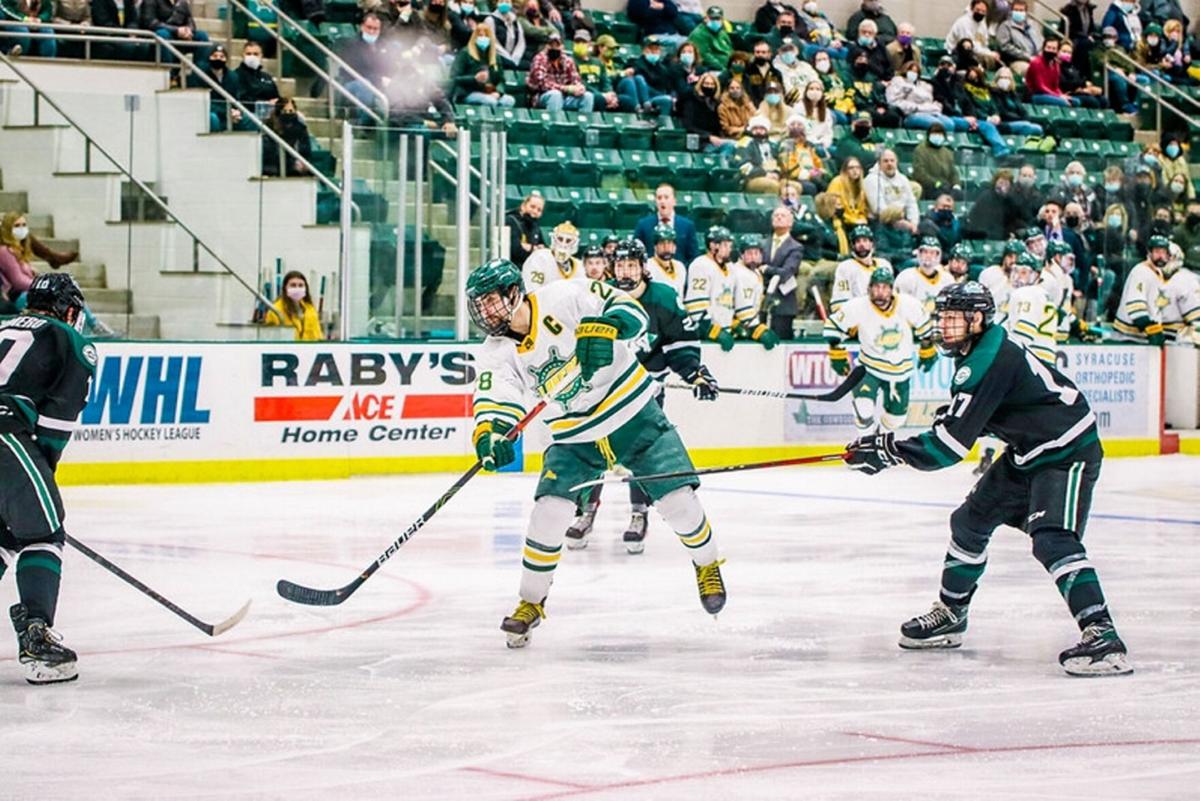 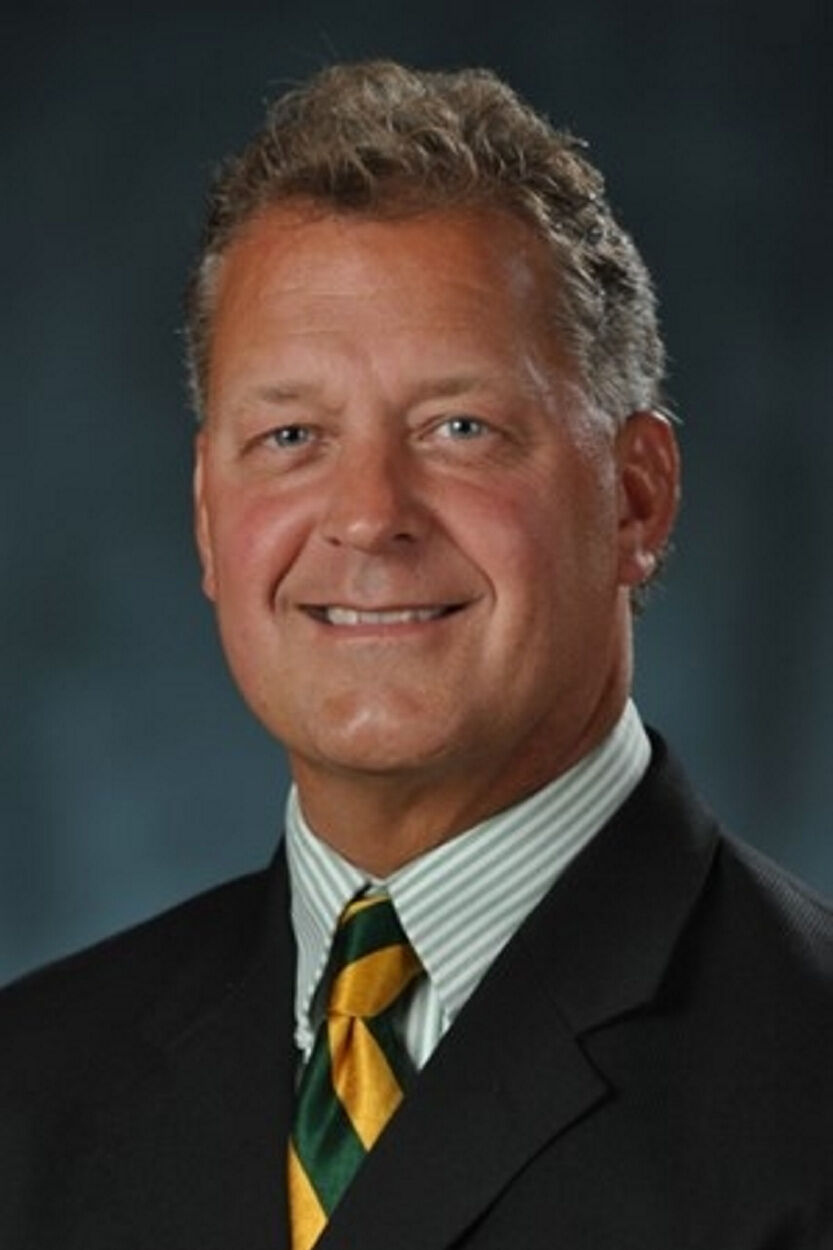 OSWEGO — The Oswego State men’s ice hockey team unknowingly gave longtime coach Ed Gosek a memorable gift that only they could deliver to close out the first semester.

The Lakers claimed a 6-5 overtime victory over the Nazareth Flyers Dec. 11 on the road to enter the holiday break on a five-game winning streak, wrapping up the opening half of their schedule at 8-3-1 overall.

The victory gained added significance as No. 350 for Gosek in his decorated career guiding his alma mater.

The national champion head coach and his players were not aware of the milestone until they were notified by an assistant coach and subsequent social media post after the team returned home from Rochester and had already gone their separate ways.

“I had no idea that game would be his 350th win as head coach,” Oswego junior captain Travis Broughman said. “Coach Gosek is as humble as they come, probably why he didn’t mention it before or after the game, now knowing it was his 350th win is an incredible milestone. His dedication to the program is out of this world.”

Oswego is scheduled to open the second semester with a pair of games in its host tournament this weekend.

Gosek started as a Lakers assistant in 1990 and became head coach in 2003.

He has posted an overall record of 350-111-31 since taking the reigns for a win percentage of .743 to go with six appearances in the NCAA Division III Frozen Four, including the 2007 national championship victory.

“That part of it is nicer because your winning percentage, it shows your consistency and that you’re doing the right things over time,” Gosek said.

“It wouldn’t be possible without our administration and Deborah Stanley and her passion and insightfulness in building the campus center has helped recruiting, our admissions people, the community and the college, the assistant coaches I’ve been fortunate to have, really blessed to do something that I love and I’m passionate about,” he added. “I love our school and couldn’t be happier than to spend the amount of time I’ve spent at the same college and to have the success here.”

To make the occasion even more special, Gosek secured the win while opposed by Nazareth coach George Roll on the other side of the ice.

Gosek served under Roll as an assistant at Oswego after working for seven years under Don Unger, and credited Roll for keeping him on the staff and helping lead him into the head coaching position as his predecessor.

“He’s the one the pushed me and said: ‘Some day you should be the one running this program,’” Gosek said. “So, to play (Roll) for the game, who would have guessed that it would fall when we’re playing them. We’re good friends and I owe a great deal to him for pushing me to get my master’s degree so that I could be a head coach.”

The monumental win for Gosek’s career also capped off a strong finish to the opening half of the slate for the Lakers.

Oswego quickly regrouped from an 0-2 start to the campaign to win eight and tie one of their final 10, including five straight victories to close.

Gosek and Broughman each used the words resilience and growth when discussing the process of developing chemistry with 21 of 28 players getting their first experience on the ice after last season was canceled entirely due to COVID-19 concerns.

“I think at the beginning we were a little stressed and played a little scared and now we are playing with a lot of confidence,” Broughman said. “I think when we get back, we just need to stay on the path we are on. We continue to do the little things and have that extra effort and it’s showing.”

Oswego celebrated the return of the team by hosting a Family and Friends Weekend and Hall of Fame induction ceremony to begin the season, highlighted by a ceremony to rename the Marano Campus Center to the Deborah F. Stanley Arena and Convocation Center to honor Stanley, who is retiring as Oswego State University president.

“We had some alumni in town and got to hear the experiences that they had here and what it means to be a part of Lakers hockey,” Broughman said. “That was truly a great experience and awesome to see how far Lakers hockey has come since it started.”