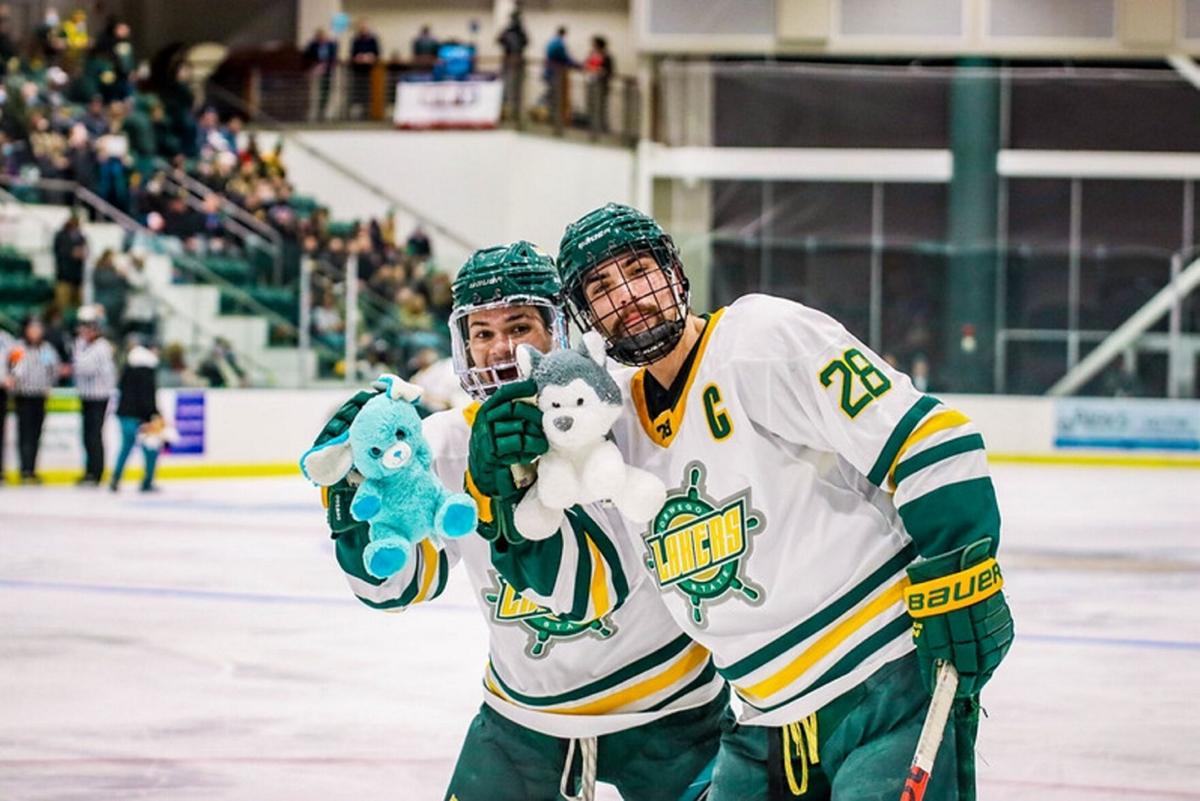 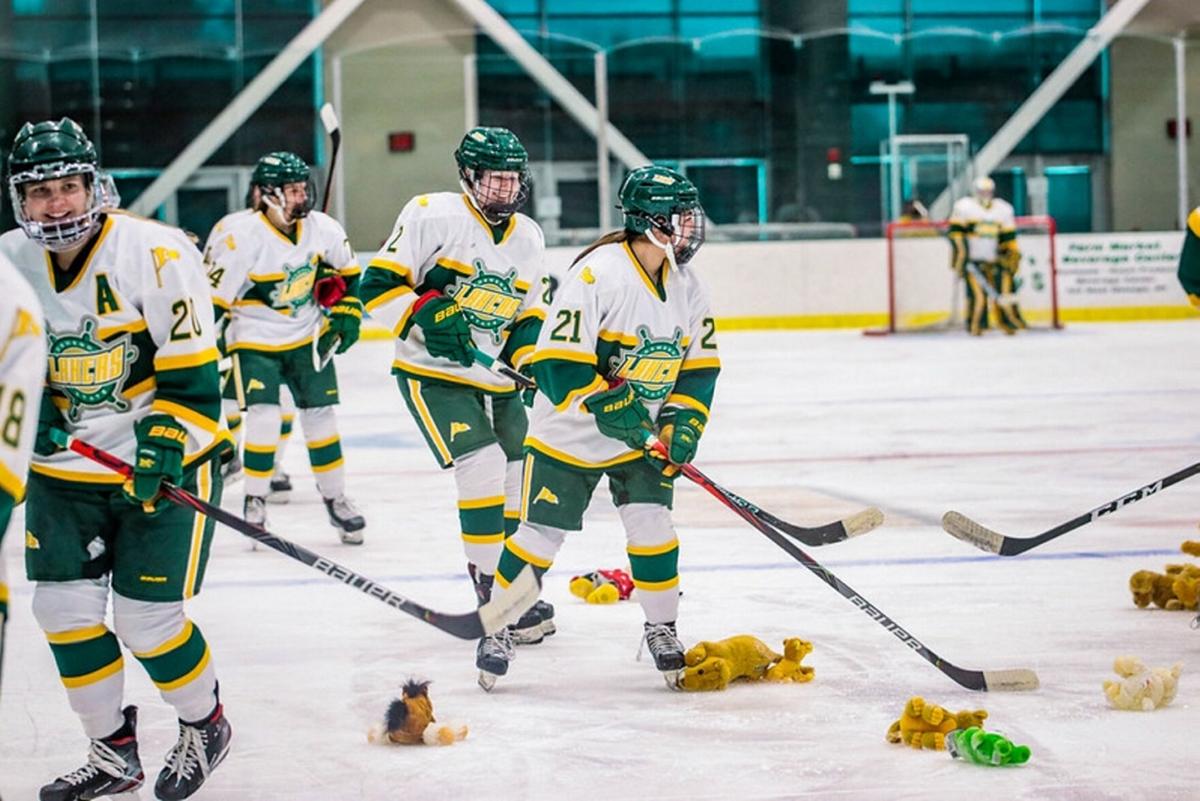 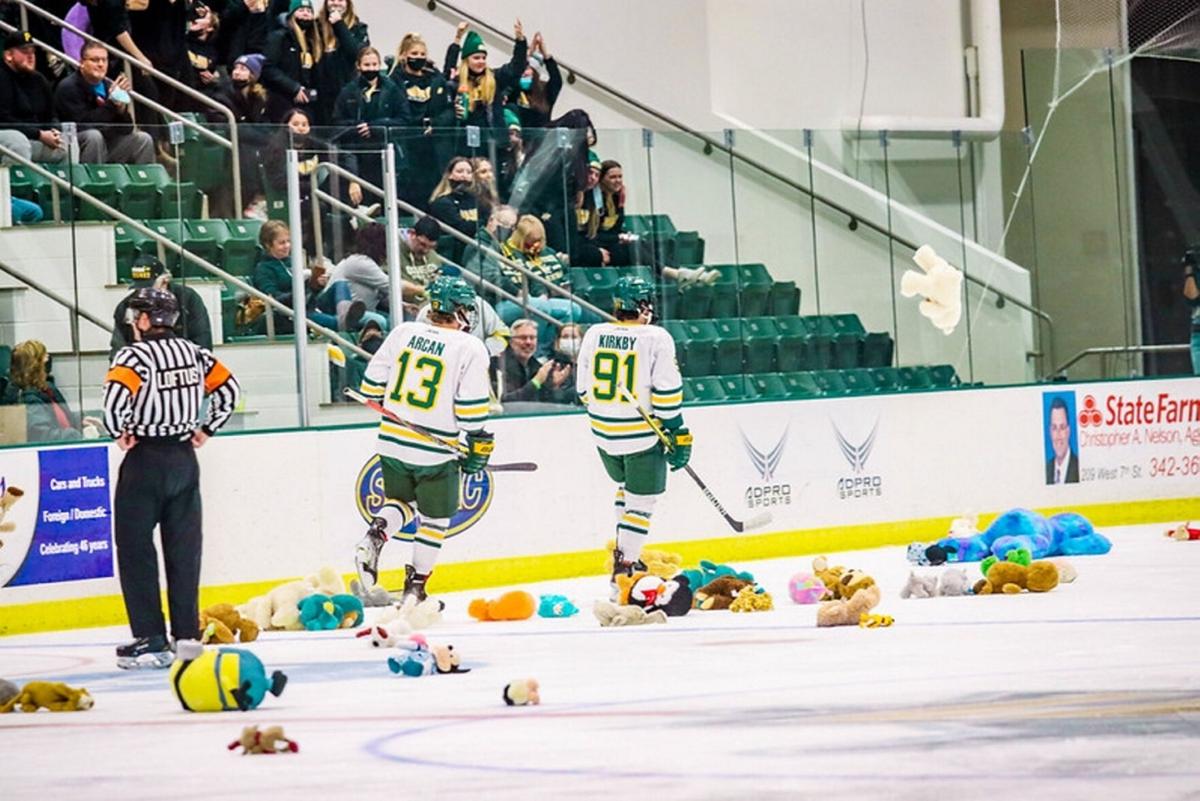 OSWEGO — More than 900 kids in Oswego County will be opening a stuffed animal this Christmas thanks to the recent efforts of the Oswego State men’s and women’s ice hockey teams.

Both Lakers squads brought back the annual “Teddy Bear Toss,” to coincide with their respective returns to the ice this year to benefit the United Way of Greater Oswego County and Toys for Tots.

The combined contributions of each fundraiser led to more than 900 bears and other stuffed toys to be distributed as gifts around the area, while food and monetary donations were also accepted.

“It’s always fun being a part of the Teddy Bear Toss,” said Travis Broughman, the junior captain for Oswego men’s hockey. “It goes towards a great cause, and we know the fans love chucking those bears out after the first goal. Having the fans back in person and really getting to see the emotion that this game brings is incredible.”

The Oswego men’s team claimed a 5-1 victory over Morrisville to highlight the holiday-themed festivities on Dec. 3 at the Deborah F. Stanley Arena, while the women’s squad captured a 5-0 shutout win over Potsdam on Nov. 20 in the same location.

For each game, spectators were asked to bring a stuffed animal and once the Lakers score their first goal, fans throw their toy onto the ice. Players then skate around and scoop up the haul that is piled into in a large bin and then sent away to their respective charity partners.

The moment is highly anticipated for players and fans alike and has caused delays of more than 20 minutes to clear the ice.

Morgan Shines scored the breakthrough goal for the women’s team this year after the unit was shut out in 2019 during its first time joining in the fundraiser. She was assisted by senior captain Philomena Teggart and Avery Webster.

“I think everybody had a little extra jump in their step wanting to be the one that scored the goal this year,” Oswego State women’s hockey coach Mark Digby said. “To get it done and see the community come out and support us in that way, to have the ability to provide that fun outlet for everybody again, just a huge sign that we’re coming out of this together.”

Both teams had their respective seasons canceled due to COVID-19 concerns last year but held a virtual version of the fundraiser, conducting a contactless drop-off site while taking online donations over the course of a week.

That endeavor served its charitable purpose but both teams spoke to the added enjoyment of seeing the process play out on the ice in the way it was intended.

“It’s good to support United Way and any time we can get the community involved with our games like that, it just makes it more fun for us,” Teggart said.

The Teddy Bear Toss was a tradition started by men’s ice hockey coach Ed Gosek and Digby, who was his assistant at the time, in 2016 based off similar events they witnessed at other rinks.

The Oswego High School indoor track and field team volunteered to help with a donation booth at the rink for each game to continue its annual involvement under coach Dom Pike.

“It’s a great event and it felt good to have it back and going,” Gosek said. “Hopefully the pandemic will stay under control and next year it will be even bigger and better.”