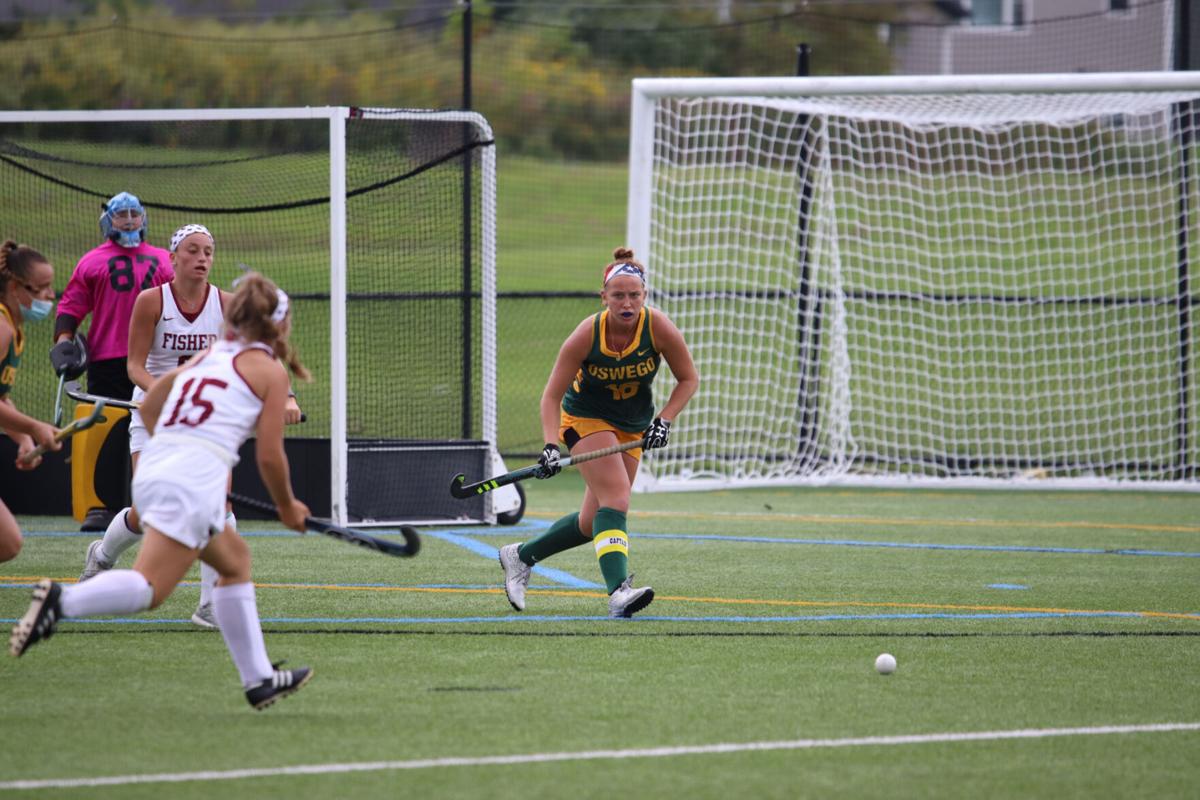 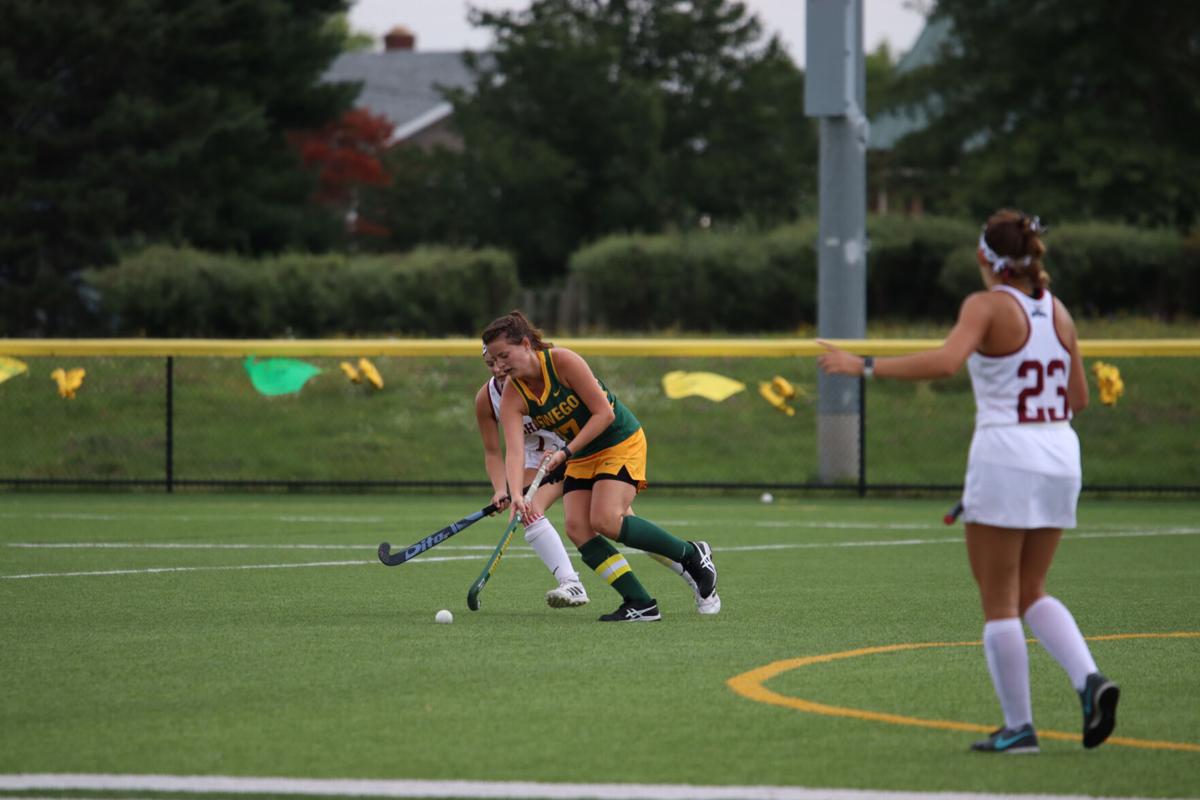 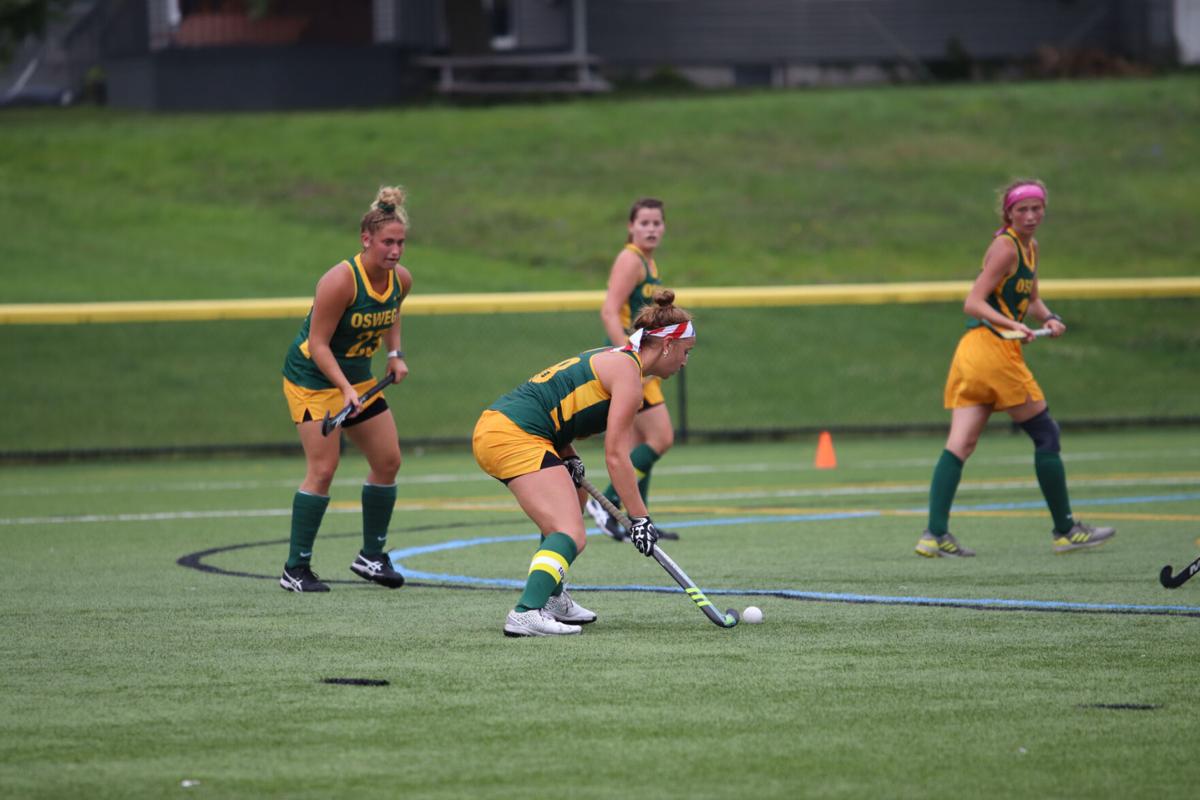 OSWEGO — The Oswego State field hockey team utilized its year away from the field to work toward a fresh start and is already reaping lasting rewards for the program.

The rejuvenated Lakers entered the week with a 6-4 overall record and a 1-1 mark in the SUNYAC while chasing their first SUNYAC postseason appearance ever and first record of .500 or better in more than 30 seasons.

Oswego opened with four consecutive shutouts, scoring a program-record 30 straight goals before allowing its first to an opposing team to start a season. They lead the SUNYAC with 286 shots on goal and rank second at 4.6 goals scored per game.

“Everybody is on one page to get the ball into the top half of the field and get shots on goal, which has made a huge difference,” Testo added. “We’re definitely working as a team a lot more this year, and that has made the difference and led to more offensive touches and goals.”

The Lakers have already surpassed their win total from 2019 and matched their six wins from 2018. They did not play last year after the SUNYAC canceled all fall sports due to COVID-19 concerns.

Returning seniors said that they have been fueled by their perceived underdog status thus far and have used the idea that teams are overlooking them as serious contenders for added motivation.

“When we’re looking at the next team we’re going to play and the history of it, and you see loss-loss-loss,” said senior forward Alyssa DeMichael, a fourth-year starter. “Then we go out and beat them, it’s nice seeing how the team has progressed and we were able to be a part of that. Hopefully it will continue when we leave.”

Oswego’s on-field resurgence started during its year away, according to coach Heather Moore and returning seniors. The team was unable to meet once the campus shut down at the onset of the COVID-19 pandemic, and quickly halted attempts to organize team workouts last fall amid a lost season.

They instead joined the many teams nationally that worked to stay connected virtually and develop their individual skills for their eventual return to competition.

Oswego conducted a variety of fitness-oriented team challenges, worked on solo drills provided by Moore, held themes throughout the week such as “Workout Wednesday,” and met virtually to share their progress and maintain their collective focus.

They even watched a movie together while on a video chat and said that the need to take extra steps to stay connected helped strengthen their bond as a unit.

“It’s great to be back with the team,” said senior midfielder Jenna Rogers, also a four-year starter. “Last year was very interesting, we didn’t really get to do any of the things we wanted to do as a team, but I think everyone worked hard individually, and that’s what’s really elevated our team this year.”

Moore noted that nearly every player returned to preseason practice this summer in tremendous physical condition, and that their natural progression was evident despite the lost year of on-field development.

The Lakers possess their most battle-tested lineup in recent memory with the nine players that have started all 10 games thus far either juniors or seniors.

In 2018, conversely, the trio of Testo, DeMichael, and Rogers were among five freshmen that started at least 15 games for Oswego. Only four other players logged as many starts that year, including just two seniors.

Oswego entered the week in a three-way tie in the SUNYAC standings with Geneseo and Oneonta for the Nos. 3 and 4 positions and final postseason spots with seven games left over the next month. The team has never reached the SUNYAC playoffs since the tournament was initiated in 2010.

The Lakers last posted a winning record of 7-6 in 1988, according to team records on the official Oswego State athletics website, oswegolakers.com.

“I try not to make that the forefront, we need to focus on each game at a time and making the adjustments where we need to make them,” Moore said. “Once it happens, I think they’ll understand the gravity of it and how important some of these wins were.”