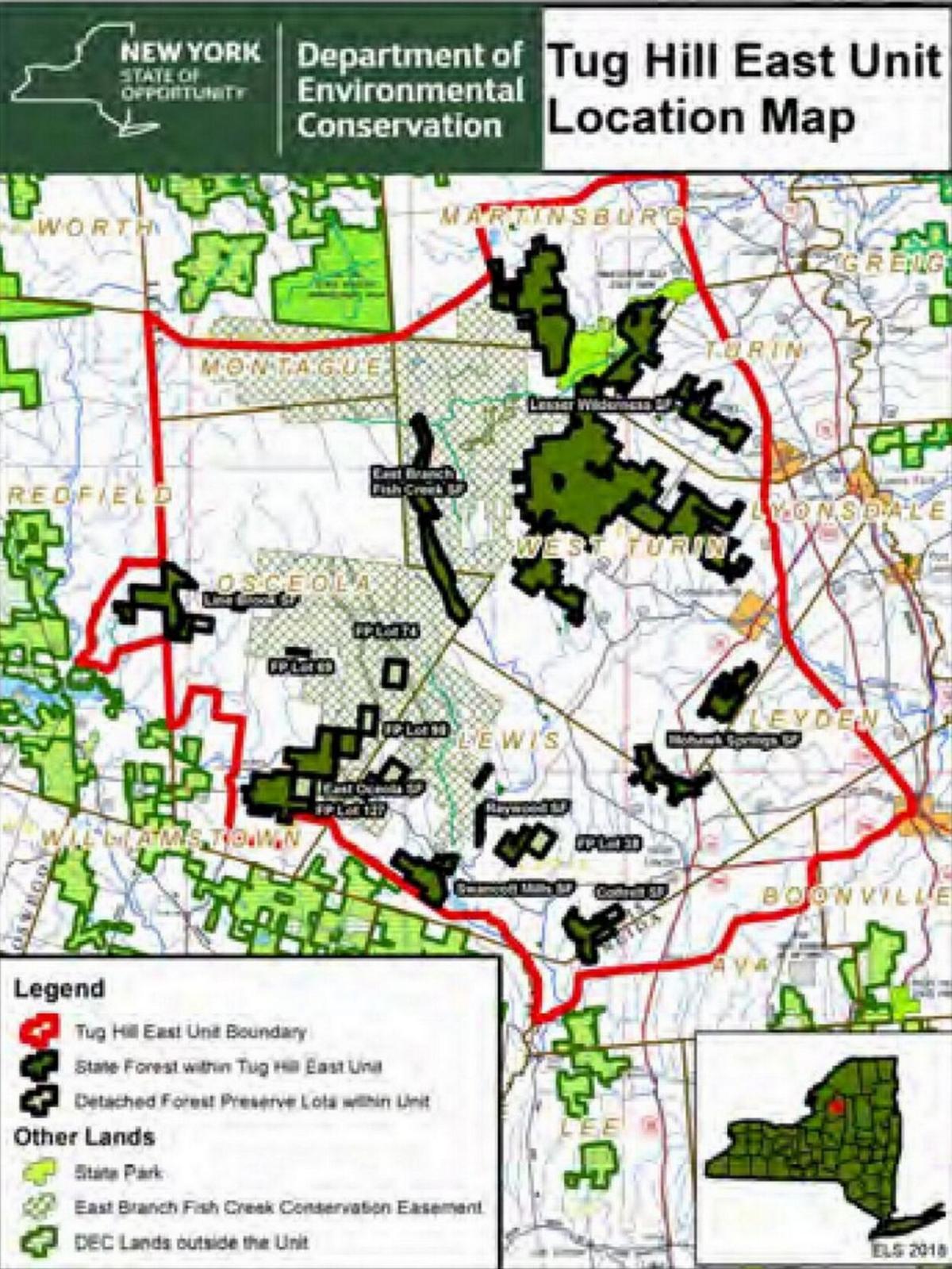 The state Department of Environmental Conservation has drafted a new 10-year management plan for an area that encompasses seven state forests, 13 detached forest parcels and one “unique area” on the Tug Hill Plateau in Lewis, Oswego and Oneida counties called the Tug Hill East Unit. Public comments on the plan will be accepted until Monday. Provided graphic 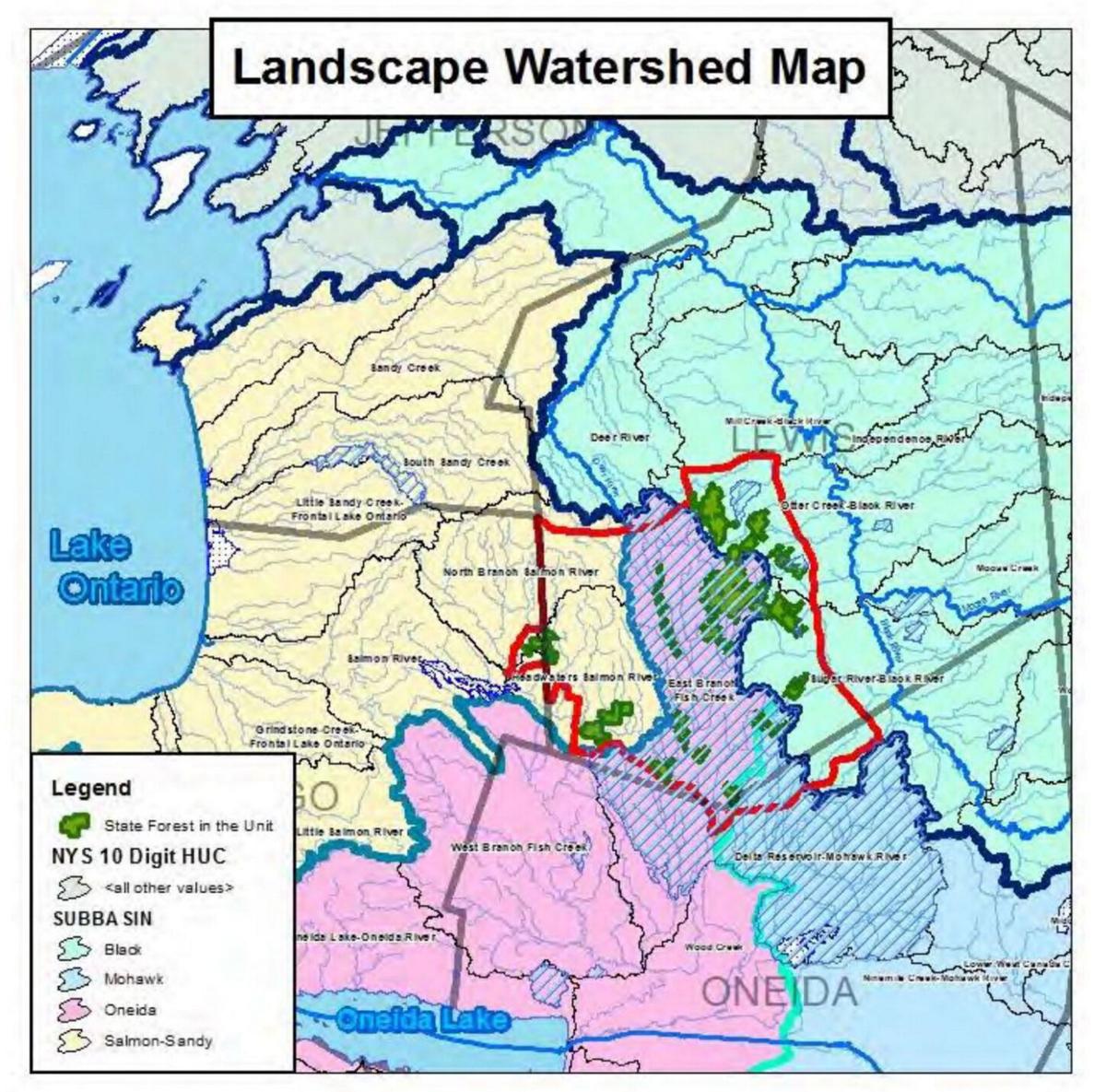 With the impact of climate change already being felt on the Tug Hill Plateau, the state Department of Environmental Conservation’s draft management plan for the Tug Hill East Unit in Lewis, Oswego and Oneida counties plans for extra monitoring of watershed and wetland health in the coming years. Provided graphic

The state Department of Environmental Conservation has drafted a new 10-year management plan for an area that encompasses seven state forests, 13 detached forest parcels and one “unique area” on the Tug Hill Plateau in Lewis, Oswego and Oneida counties called the Tug Hill East Unit. Public comments on the plan will be accepted until Monday. Provided graphic

With the impact of climate change already being felt on the Tug Hill Plateau, the state Department of Environmental Conservation’s draft management plan for the Tug Hill East Unit in Lewis, Oswego and Oneida counties plans for extra monitoring of watershed and wetland health in the coming years. Provided graphic

LOWVILLE — The state Department of Environmental Conservation has drafted a new management plan for an area that encompasses seven state forests, 13 detached forest parcels and one “unique area” on the Tug Hill Plateau in Lewis, Oswego and Oneida counties and wants to know what the public thinks about it.

The management plan gives an overview of the status of the 22,886-acre Tug Hill East Unit, focusing primarily on timber harvesting and management but also wetlands protection, animal and plant species protection or eradication and recreation opportunities.

In this draft plan, more so than in previous plans for other management areas, attention is given to the impacts of climate change — current and anticipated — and what actions will be taken to minimize impacts going forward.

Impacts of climate change on forestry, habitat, flora and fauna, will be monitored closely. The protection of wetlands, water sources and soil will be crucial for mitigating those impacts.

The wealth of the area’s tree population, health and age does not only provide financial benefit for the state. Trees are designed to sequester, or trap, the carbon that exacerbates climate change, thereby removing it from the air. Although old trees sequester more carbon, young trees do it faster.

The DEC’s document says climate change has already had a negative impact on timber harvesting in the management area because warmer winter temperatures and their related intermittent rain “freeze-thaws” has changed ground freezing patterns, and thus, where and when it is possible to harvest wood in the winter.

There is also an anticipated need for larger culverts in the Tug Hill East area because of increasing numbers of intense rain storms throughout the year.

Over the 10 year life of the draft plan, about 5,250 acres of woods will be harvested: 650 acres annually for the first five years and 500 acres for each of the last five years.

While the ability to raise revenue through timber harvesting is one of the main reasons the state owns so much forested land, the importance of also fostering species diversity and focusing on forest health and natural regeneration is also emphasized.

State forests are certified as sustainably managed through the Forest Stewardship Council and the Sustainable Forestry Initiative.

The Bay-breasted Warbler is an at-risk species of particular concern in the area because its habitat — the northern spruce-fir forest — could be on the decline because of unsustainable timber harvesting, climate change and the fragmentation of the bird’s habitat.

Wildlife habitat, especially softwood cover like spruce-fir, is emphasized in the plan as needing improvement for deer and hare during Tug Hill’s notoriously harsh winter months.

The plan states it will be protected from timber harvesting, adding that deer yards “benefit from small patch clear cuts to enhance regeneration.” The need for clear-cutting deer yard areas will be “evaluated.”

While the black bears have a low population density in Tug Hill East — which could, according to the draft plan, sustain a slight increase in numbers — hunting will continue to be allowed.

A migration study for birds and bats throughout the state is included in the plan as “relevant to the unit,” needed “to help plan wind energy developments,” although there are no new wind projects proposed for Tug Hill at this time.

Managing the aquatic life for the next 10 years will include biological and chemical surveys of waters throughout the area that will result in cooperation between the Bureau of Fisheries, conservation groups and sportsmen to do restoration projects “where feasible.”

Generally, streams will continue to be stocked with fish at current levels.

The East Branch of Fish Creek State Forest will become a “high conservation value forest” through the draft plan’s implementation to ensure the integrity of the watershed.

The draft plan states that all of the activities under the plan, including timber harvesting and recreation, will be done in a way that protects the watershed, wetlands and streams, whether they be year-round or intermittent.

Confirmed invasive species in the area are all plants, including purple loosestrife, giant hogweed, Japanese knotweed, garlic mustard, common buckthorn, glossy buckthorn and common reed, but monitoring of invasives will continue throughout the plan’s implementation.

Part of the Tug Hill East unit is core, continuous forest that hosts part of Tug Hill Tomorrow Land Trust’s Traverse Trail hiking path. In the first year of the plan, the southern trailhead for the Traverse Trail is expected to be established.

A number of campsites, several of which are targeted to be drive-up campsites, and trail upgrades are also part of the plan in various areas.

Cross-country ski and snowmobile trails over wet areas that normally stay frozen through most of winter increasingly need small bridges or “corduroy” log road stretches to protect the soil and water from the traffic.

The DEC will also work with local first responders and DEC forest rangers to decide if a strategically placed helispot would benefit emergency responses in the area.

The Draft Management Plan document contains a wealth of cultural and natural history of the area, lists of flora and fauna species and detailed descriptions of every aspect of the Management Area’s lands and how the assets will be managed over the next 10 years.

All of the webpages for the State Forests included in the unit will be updated, or created for those that do not yet have a page, and will include a printable map with the “recreational amenities” in that forest. Being that there is not cell phone service in much of the area, the printable maps will make visiting easier.

Forested lands included in the unit have various designations, uses and attributes.

While State Forests are land purchased by the state in the 1930s and 1950s under the Hewitt Reforestation Amendment, “detached forest preserve parcels” predated the amendment.

Raywood Unique Area is a 316-acre parcel purchased by the state because it has historic, geological or ecological significance that does not exist elswhere.

There are also a number of private properties with conservation easement agreements with the state which generally allow logging.