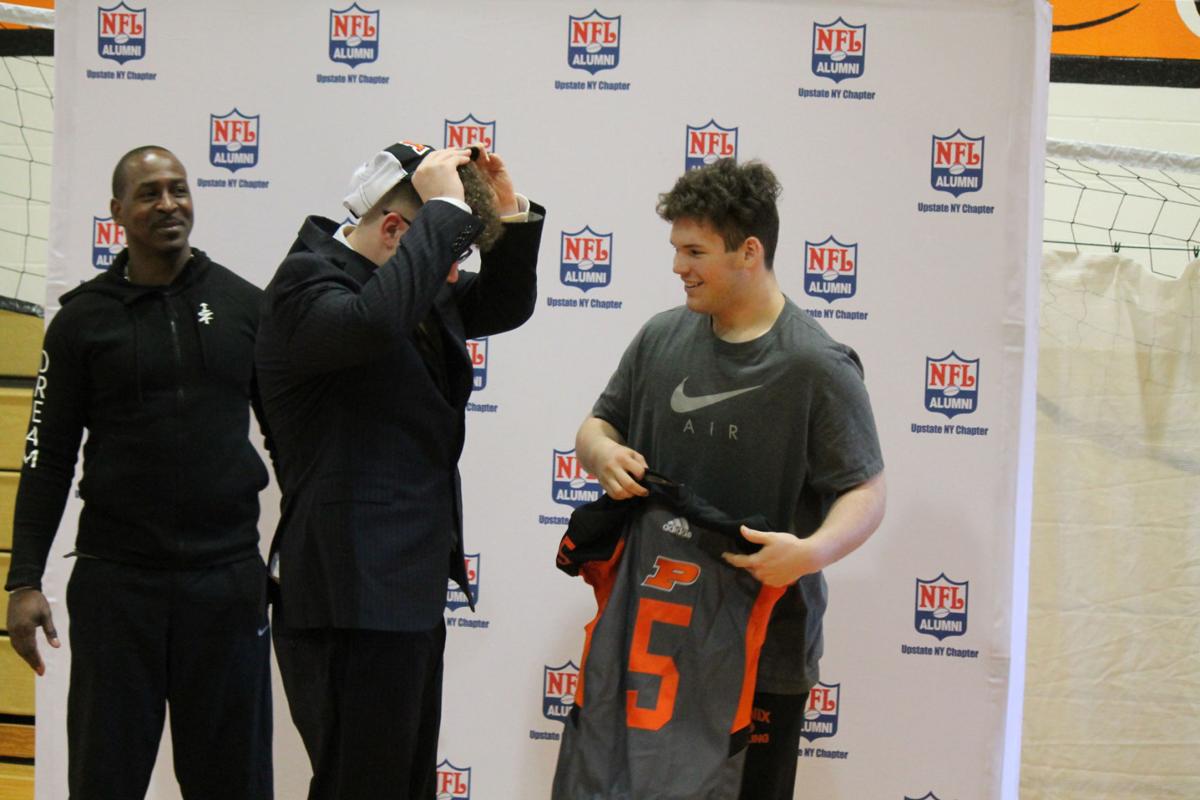 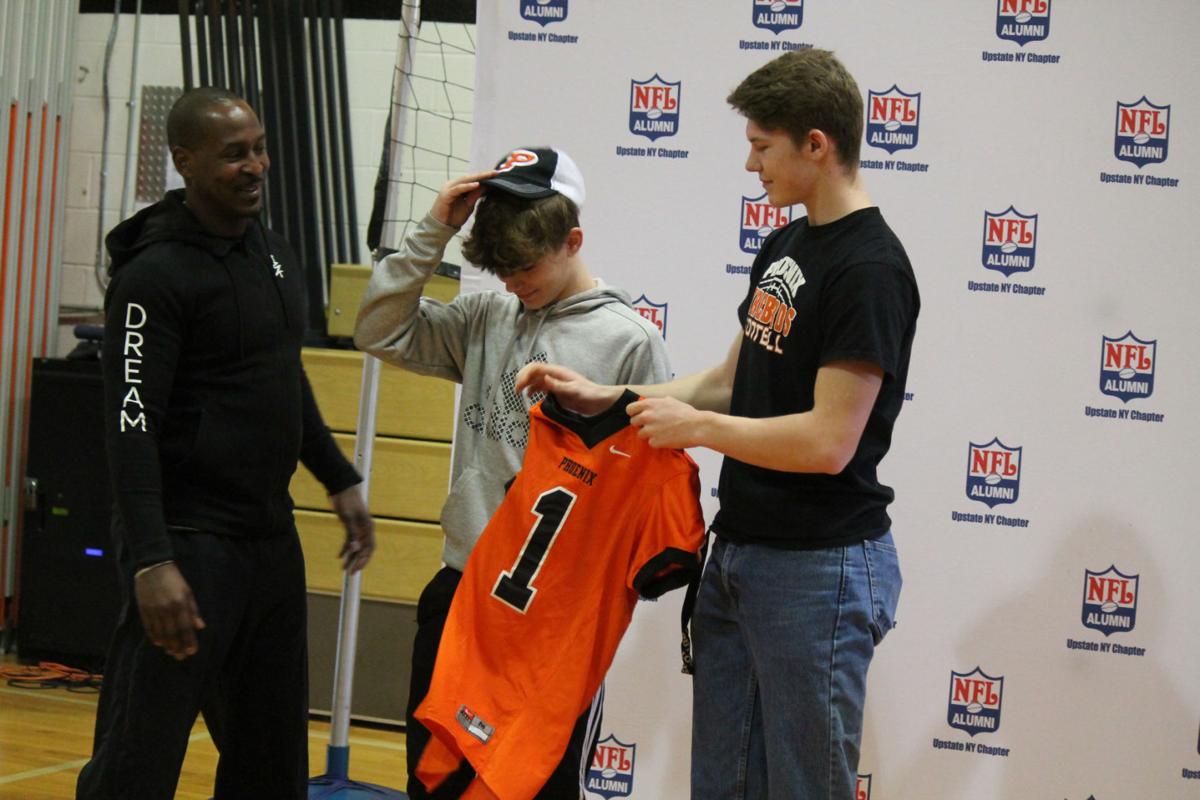 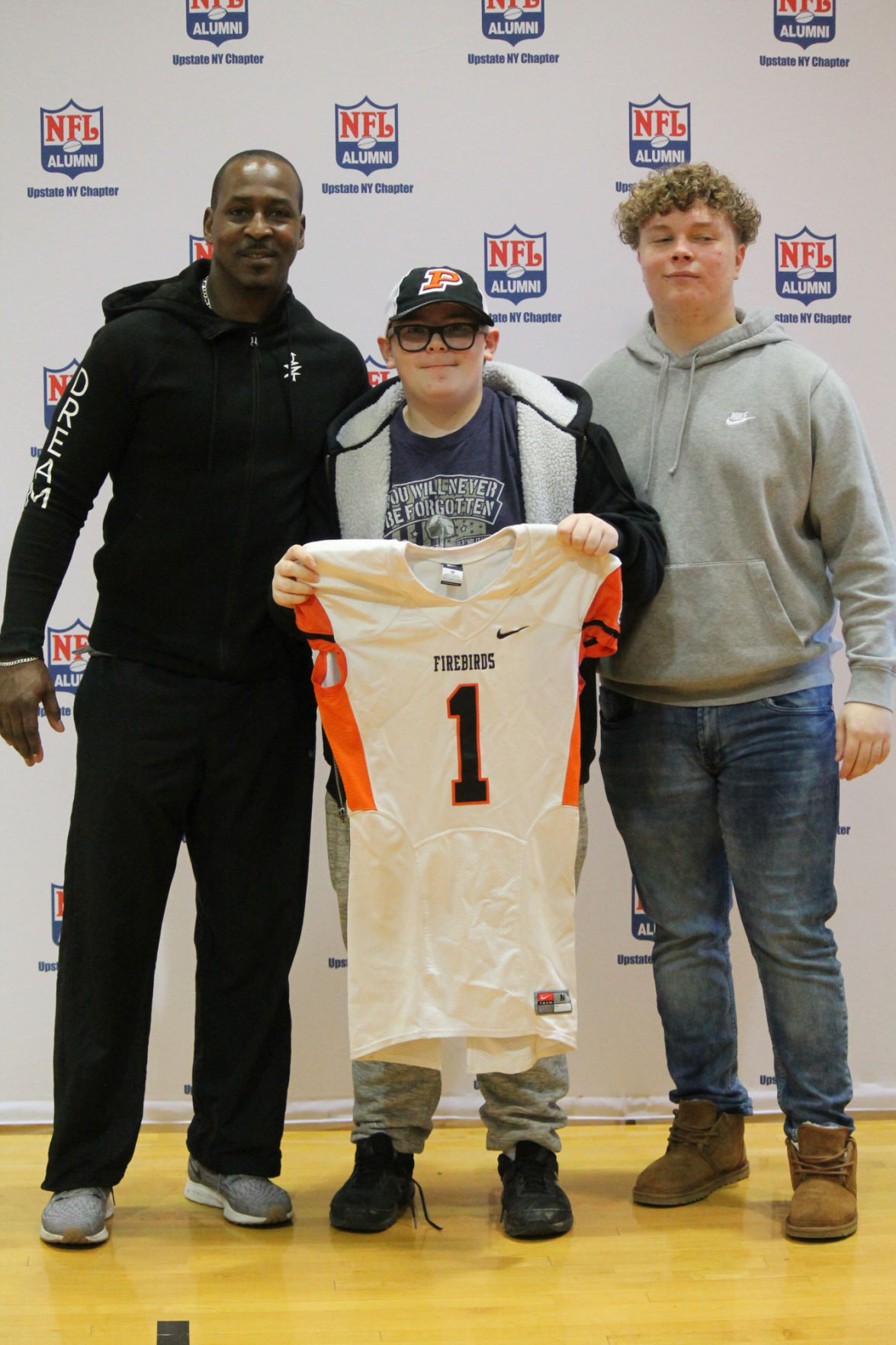 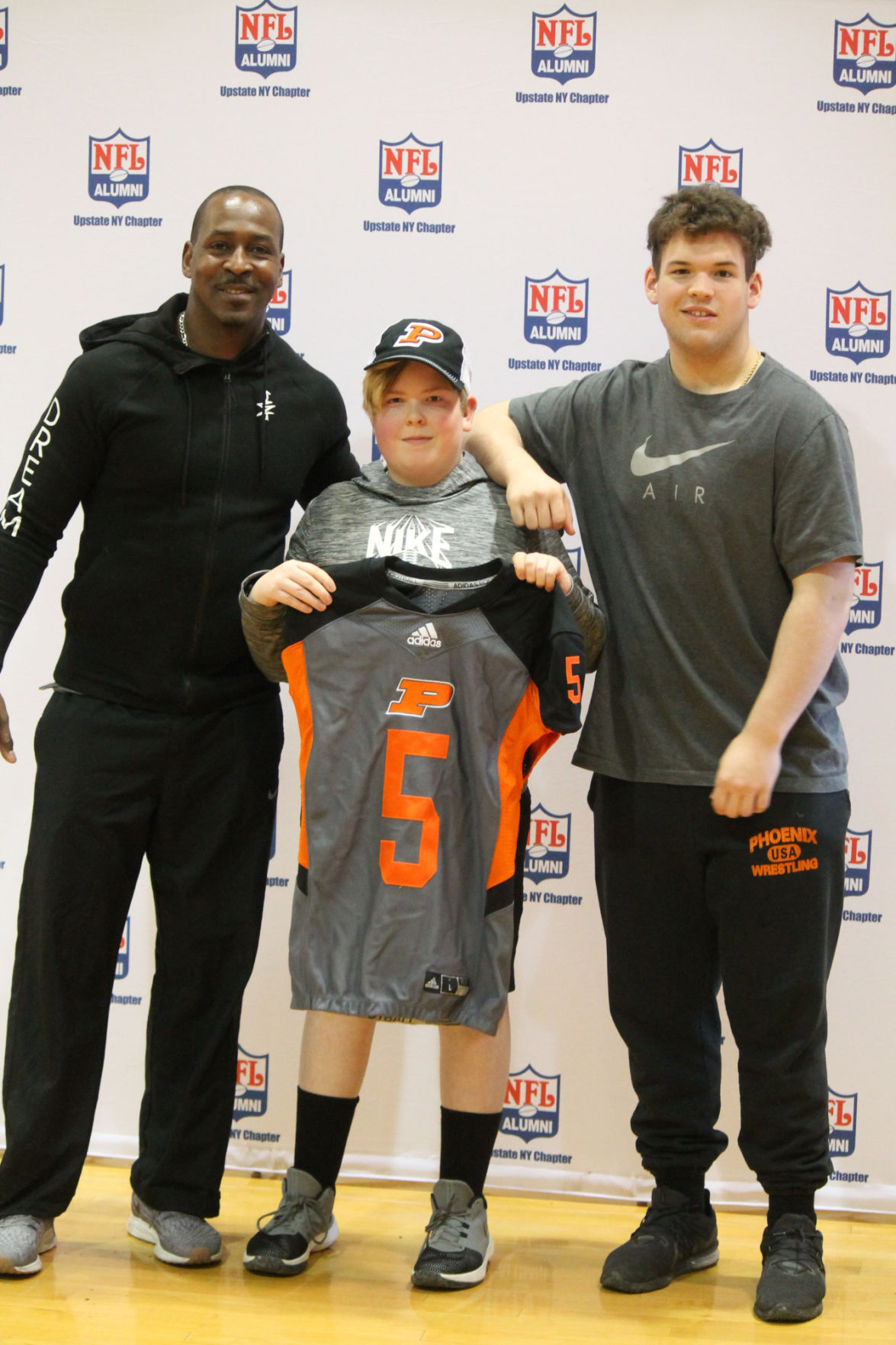 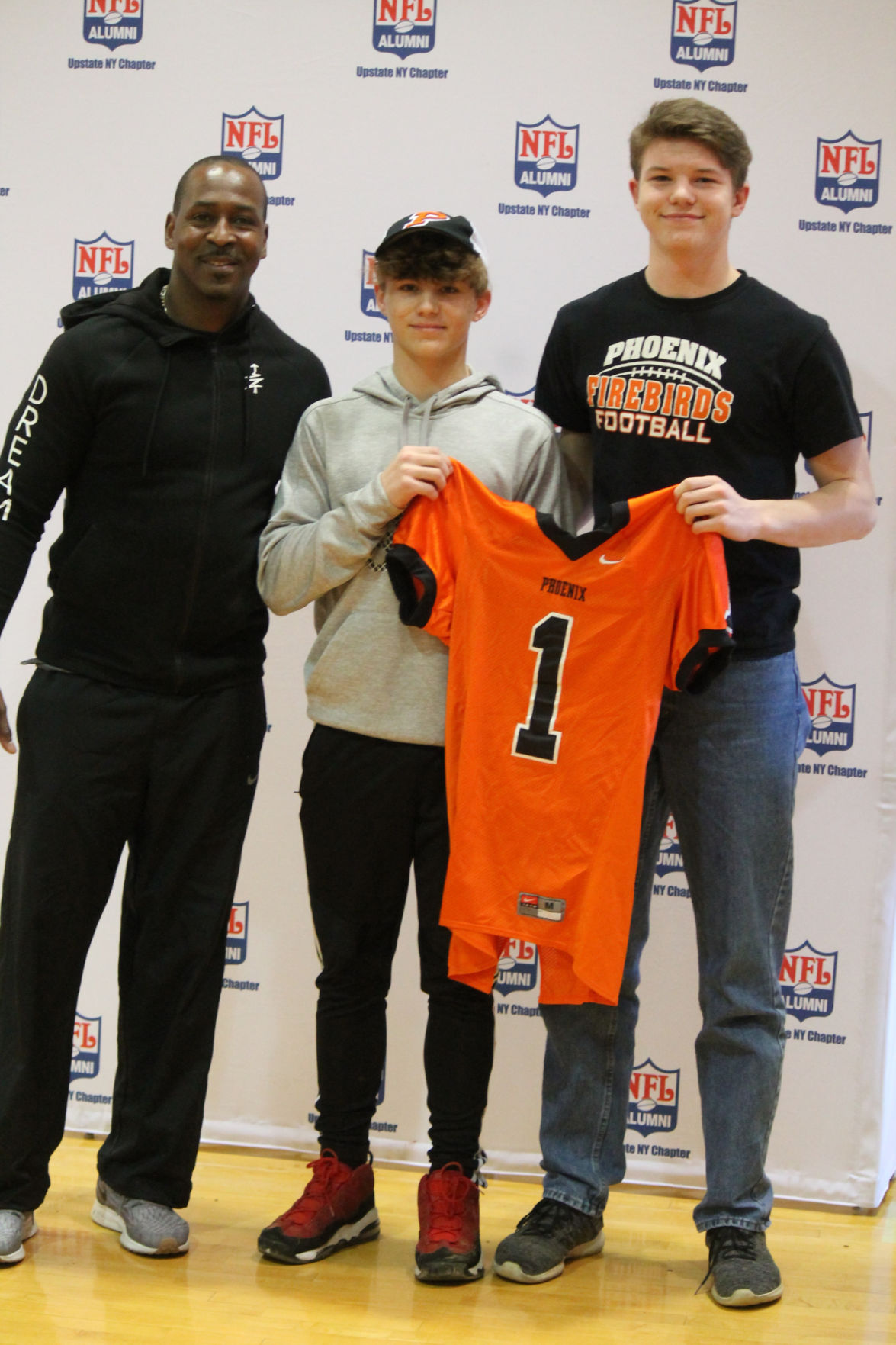 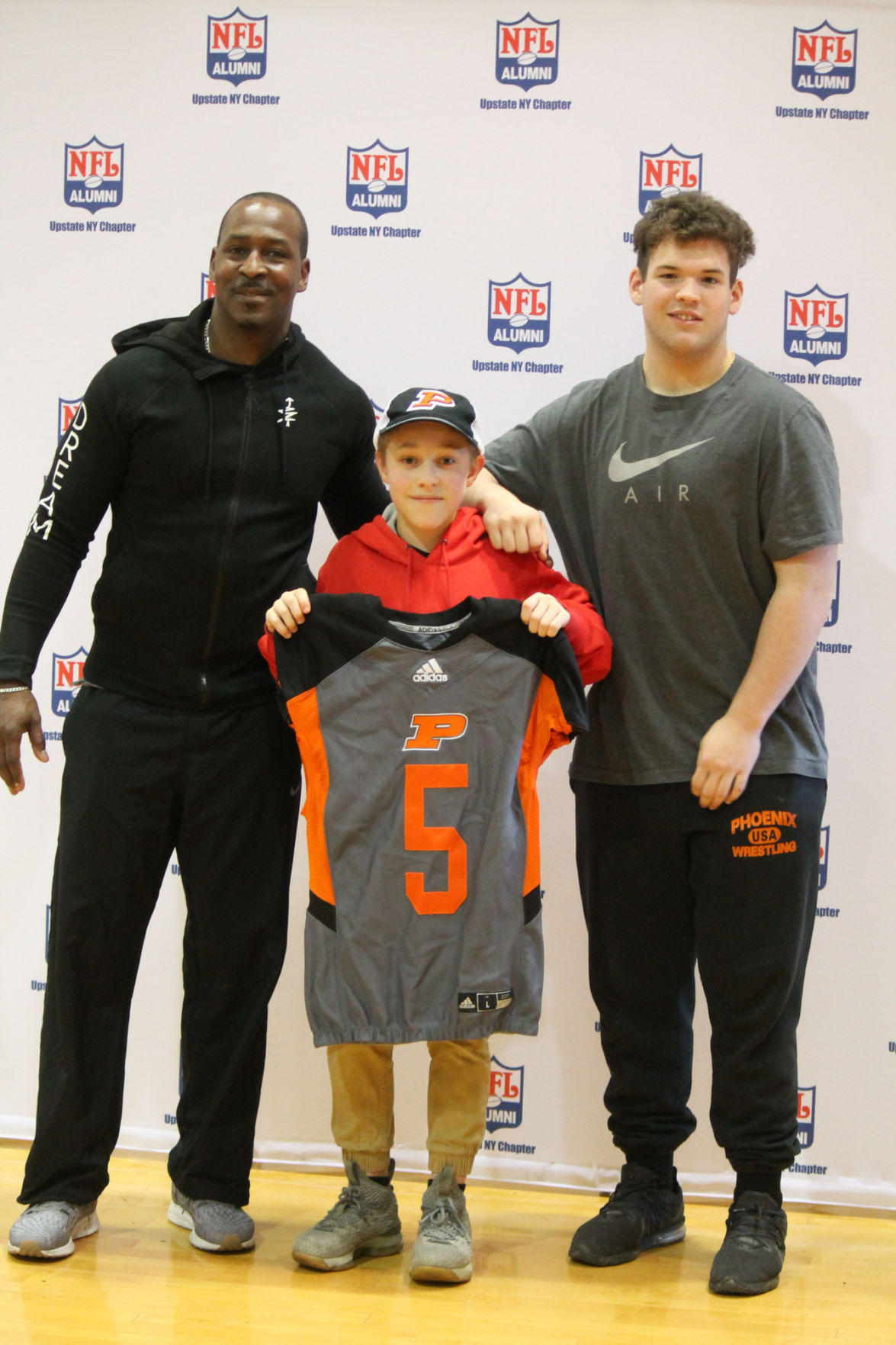 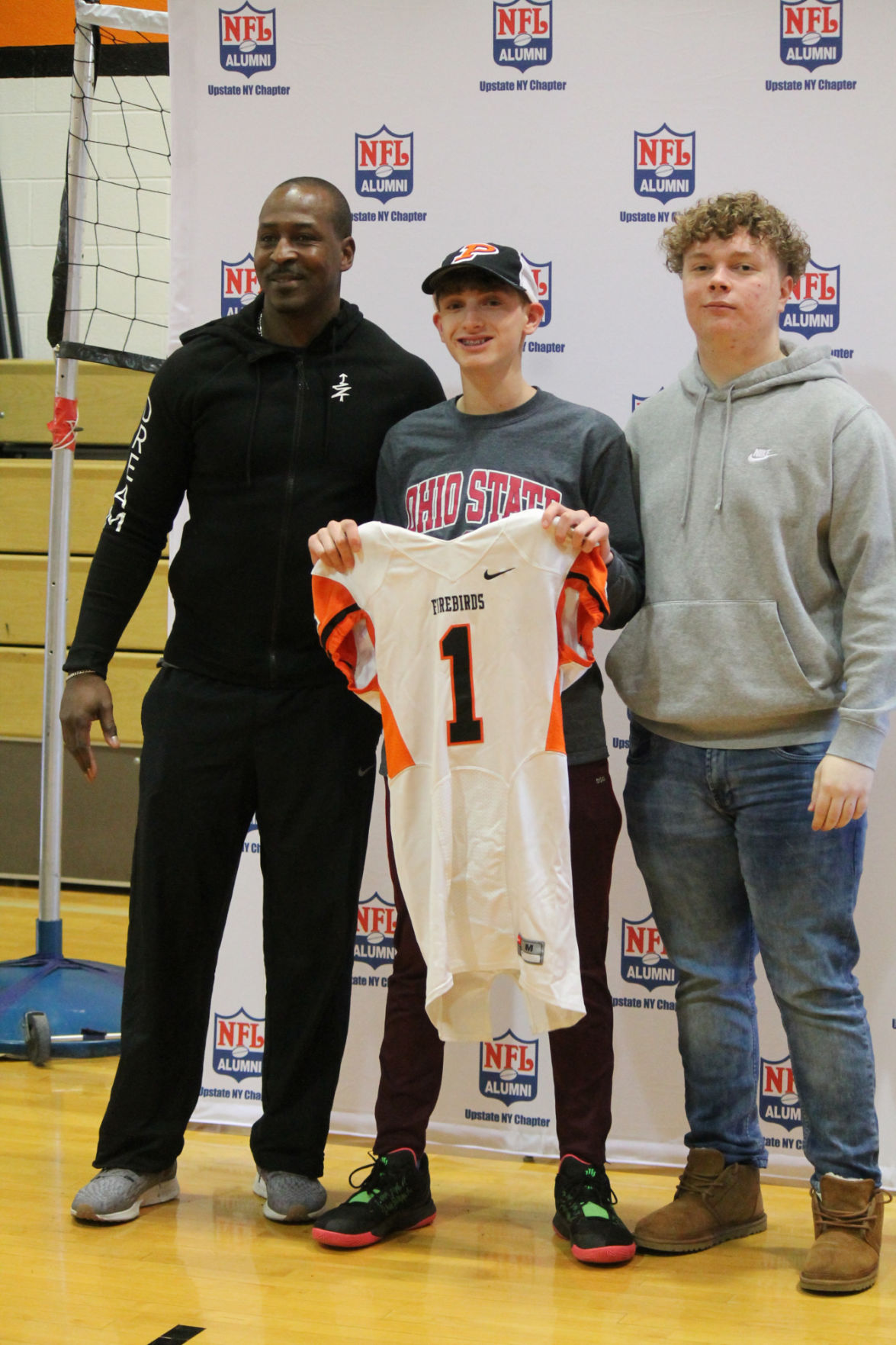 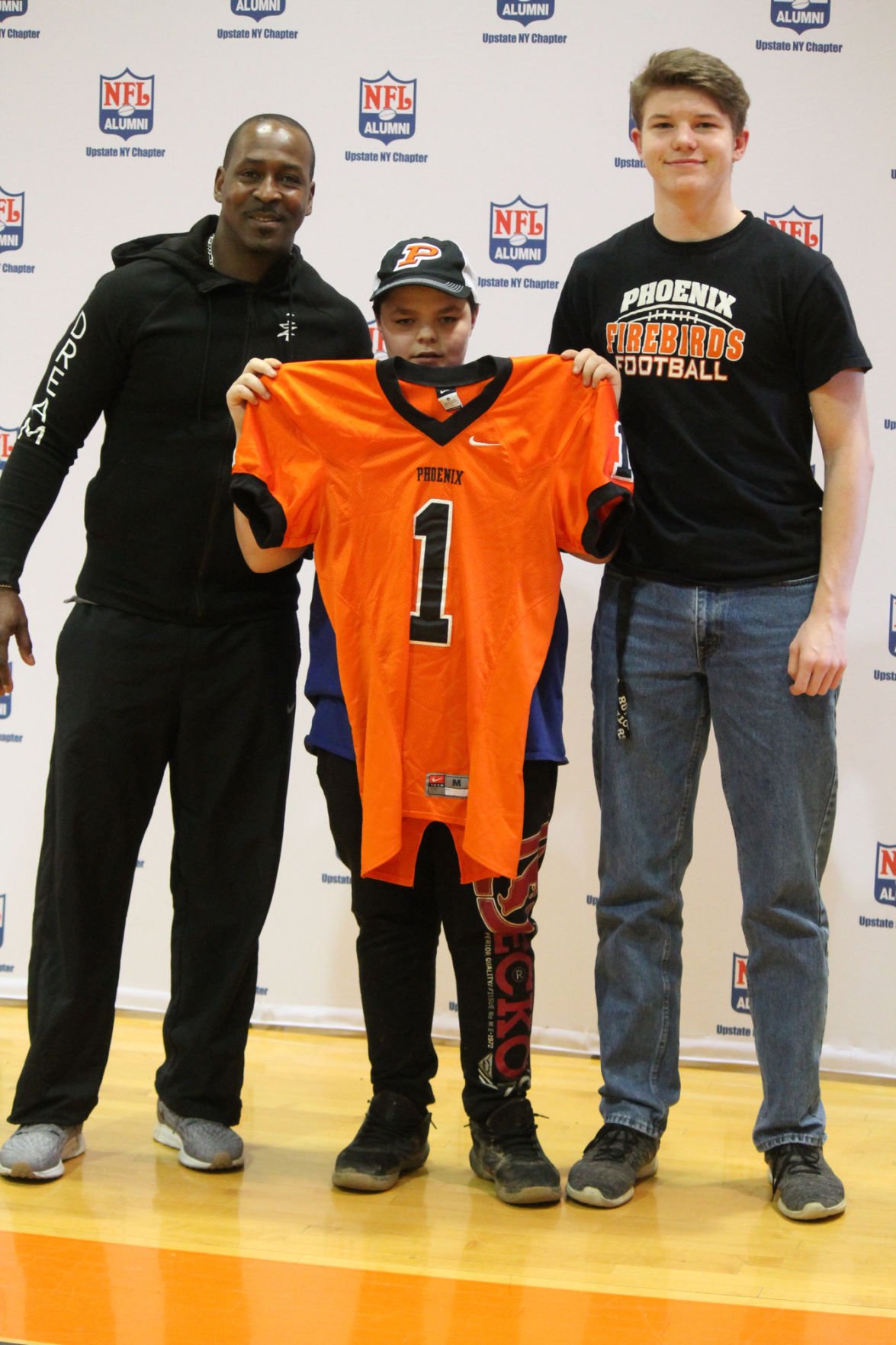 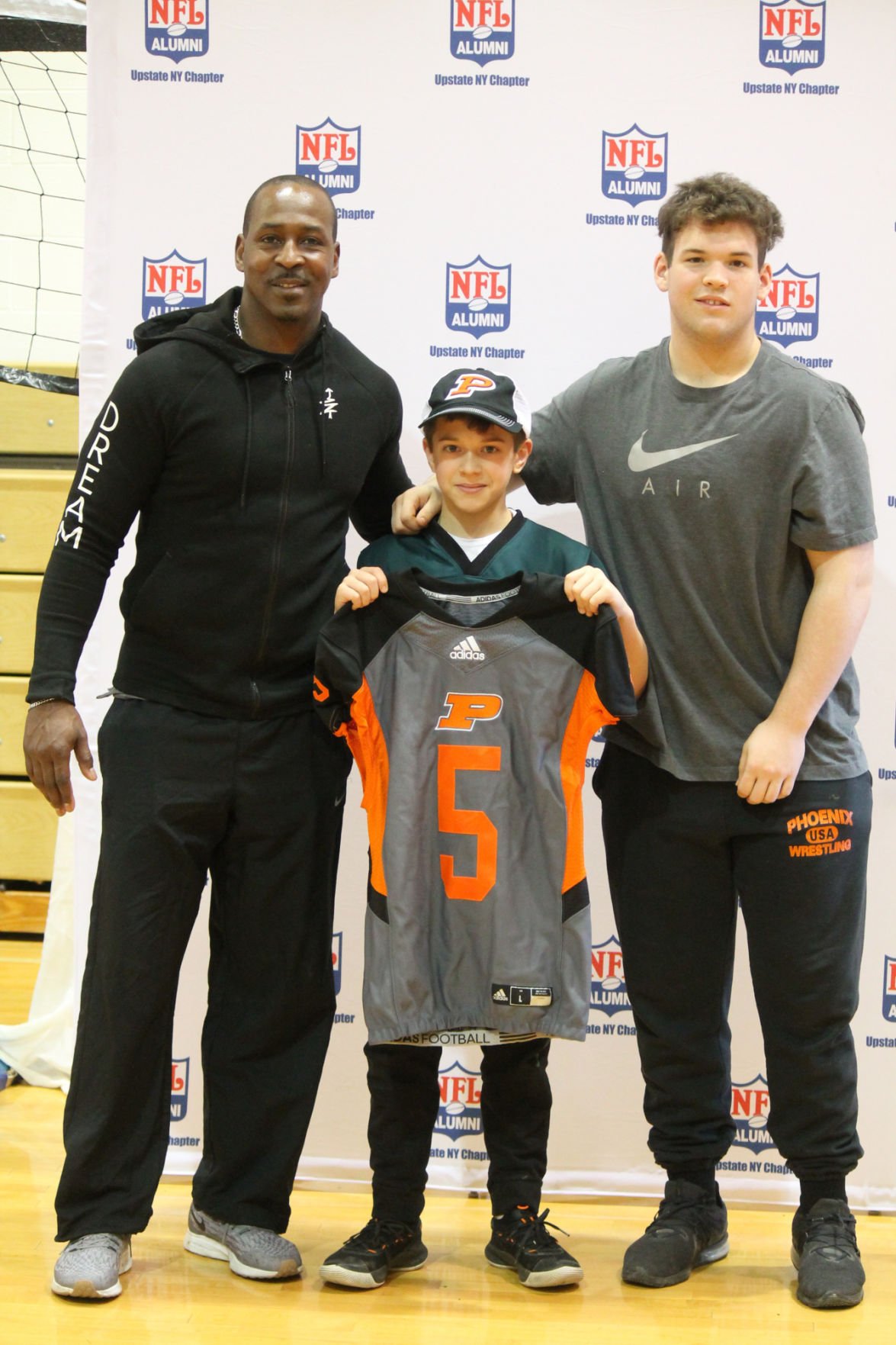 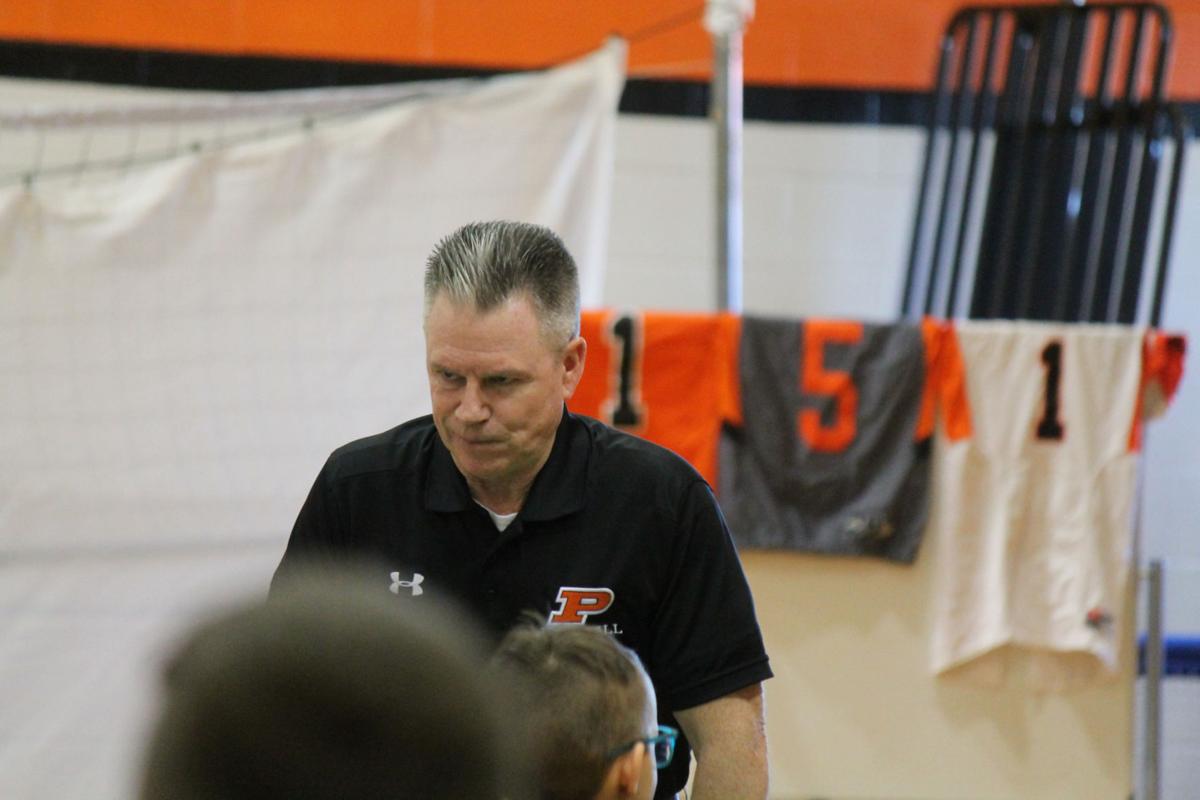 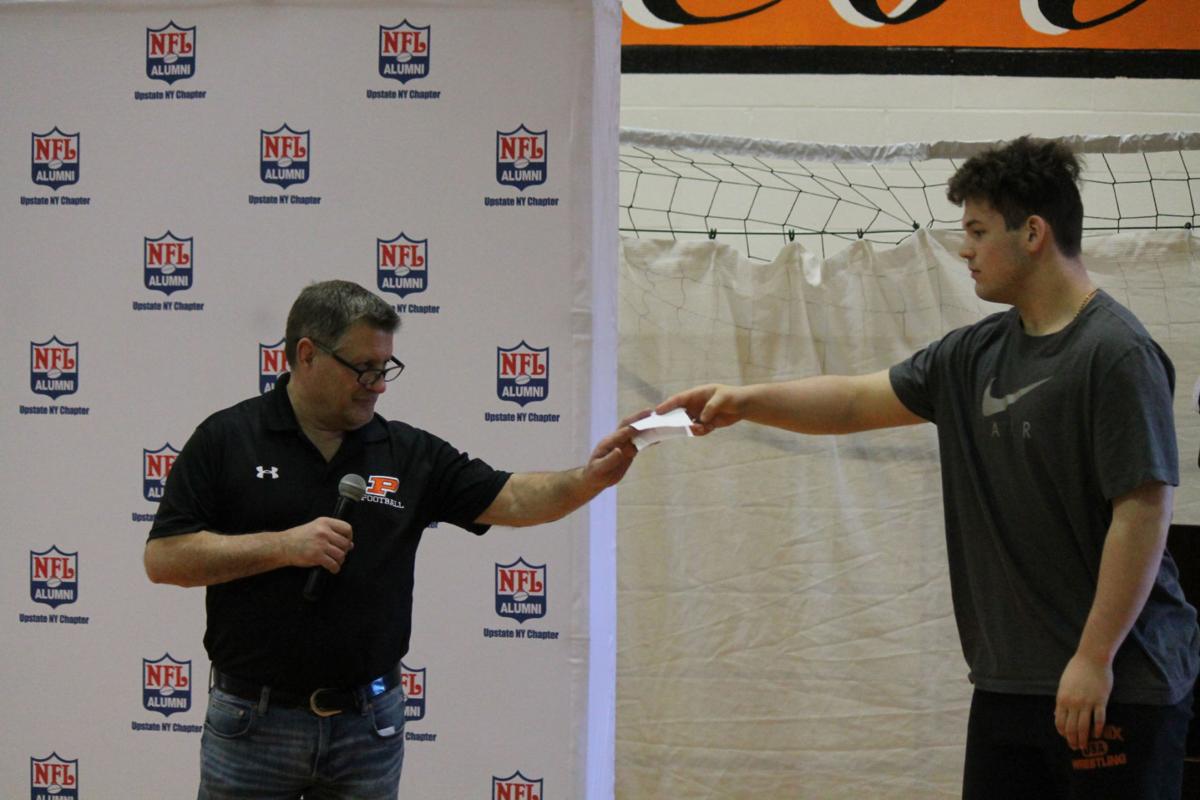 As the two discussed creating structure around such events, they couldn’t help but identify the incident as a sign of the excitement swelling around the Firebirds football program following its Team Development Draft.

Phoenix students in grades 6-11 interested in playing football were encouraged to attend the program draft on March 7 at the JCB gym to experience the thrill of being selected on draft day while beginning their journey toward contributing to the varsity program. Upstate NFL Alumni Chapter President and former NFL player Leroy Collins was on hand to congratulate the draft prospects.

“We have kids jumping over the fence now trying to play football with us, and it just makes it a good time,” said Jacob Scruton, a senior captain and tight end. “I think that was more kids than we had playing at the end of last year, and it was just a real eye opener how much everyone was smiling going out for passes, just having a great time. It just shows that people are wanting to play and are excited for next season, and that’s really good for us.”

Three separate groups were selected by general managers — senior captains and fourth-year varsity players Ethan Fox (Team Orange), Zach Green (Black) and Scruton (White) — who are responsible for mentoring their respective teams throughout the offseason with incentives for the top-performing unit.

Each potential player that attended the draft submitted a registration card that were placed into one of six bins based on position — broken down by quarterbacks, running backs, linebackers, defensive backs, receivers/tight ends, and offensive/defensive line. The GM’s then picked cards from the bins to make their selections anonymous but constructed their respective rosters with positional balance in mind.

Each draft pick was announced by Phoenix varsity wrestling coach and emcee for the event, Gene Mills, and walked to the front of the gym to receive their hat and jersey, shake hands with their team general manager along with Collins, and pose for photos — recreating the pomp and circumstance of various pro sports drafts.

“I think kids were excited,” said Johnson, who took over the varsity program entering last season. “They couldn’t wait to get up there and grab that hat and jersey, and have their picture taken with Leroy. That was fun to watch, the kids’ reactions, and even the parents. I watched some of the parents as their kid’s name was called and they jump up and clap, run up with their cameras. It was really fun.”

Throughout the upcoming summer and leading into next season, groups will be scored on six different criteria: Overall academic team average, attendance at offseason weight training, most weight gains made for individuals and teams (bench/squat/cleans), attendance at skill workouts, fewest school disciplinary issues, and a weekly “dip-off,” in the weight room.

Players on the winning team for each month will receive a gift card, and the team with the overall highest score on Sept. 1 will be treated to a dinner at Texas Roadhouse.

Prior to recent school shutdowns due to coronavirus concerns, the trio of senior captains had already begun meeting with their respective squads, creating training programs, and coordinating times to avoid overcrowding the weight rooms. In addition to helping younger players develop strong habits and character, the program is intended to help build leadership qualities in the senior ‘GMs.’

“It’s a good way to get the younger generation of football players in Phoenix to come out and see what it’s like to be a varsity athlete, really just let them know they’re welcome to come out and try it and see if they like it,” said Green, a fullback.

“I think all three of us are happy with our selections,” he added. “My team ended up with a lot of younger players from the middle school, and I’m pretty happy with that because I get to help coach them up and just be a leader for them and help them realize they can be great athletes if they put in the work.”

Johnson said that he has received a litany of positive feedback on the draft-day extravaganza. The event was open to the public and several families were in attendance.

Raffle baskets were donated, and the owners of Phoenix-OTB restaurant — Michael Lattimore Sr. and Michael Lattimore Jr. — donated food and drinks for the festivities while high school principal Thomas Bailer and his wife, Melissa, provided pizzas.

Video highlights of the 2019 Firebirds varsity and modified seasons played before a short intro to kick off the draft.

“I believe it really helped with our community base,” said Fox, a senior captain and quarterback. “We had a lot of people show up for it, a lot of younger kids and different people around the town. They all came and supported us through the draft, people brought raffle baskets and food, so it really helped out.”

Johnson brainstormed the draft idea with help of other Phoenix supporters — including Holly Fox, referred to as the ‘Team Mom,’ — to spark interest in the once-proud program that is seeking its first championship since 1975 and endured an 18-game losing streak earlier this decade.

The Firebirds were approved to add a junior varsity team for the 2020 campaign and are eager to begin next season in the Section 3 Independent Division at the school’s new turf field, which was not completed in time for a home football game last season.

“I think that just makes it more exciting for us,” Green said. “We’re just trying to make this last year of football for us the best that we can and hopefully leave these kids that we drafted with everything that we’ve learned and all of our experiences.”