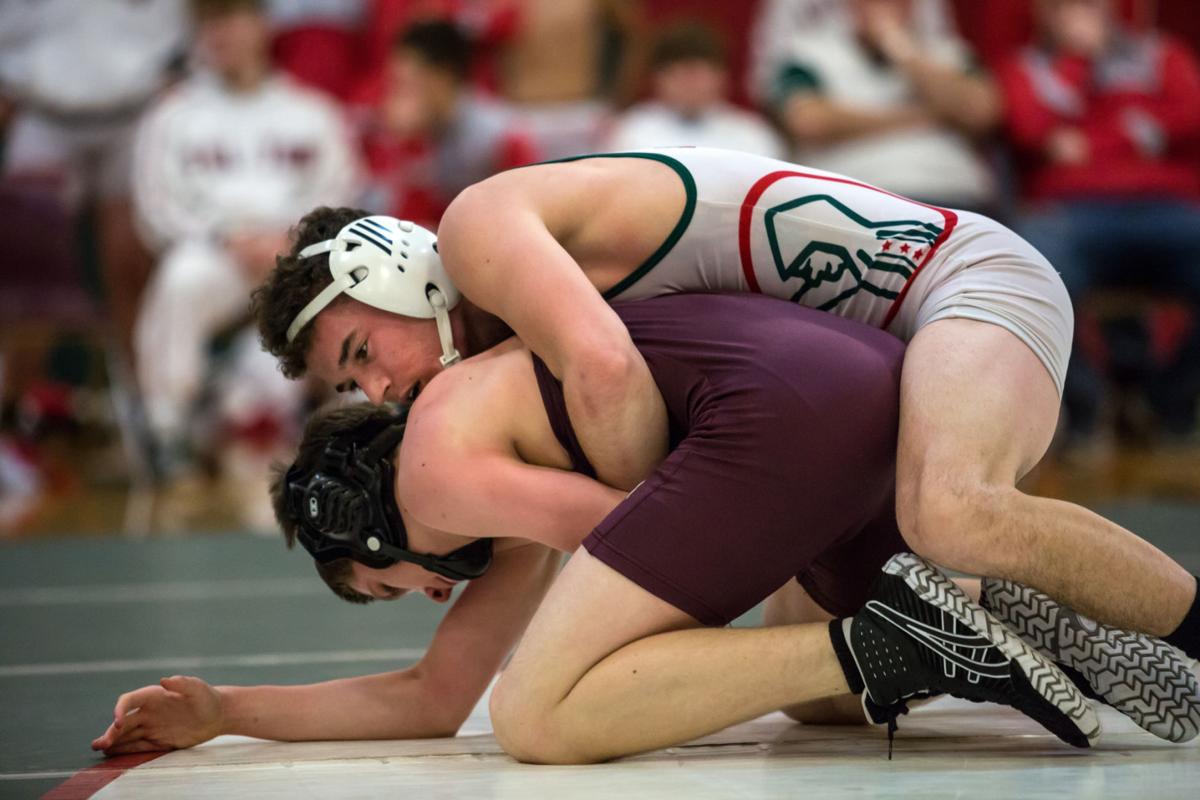 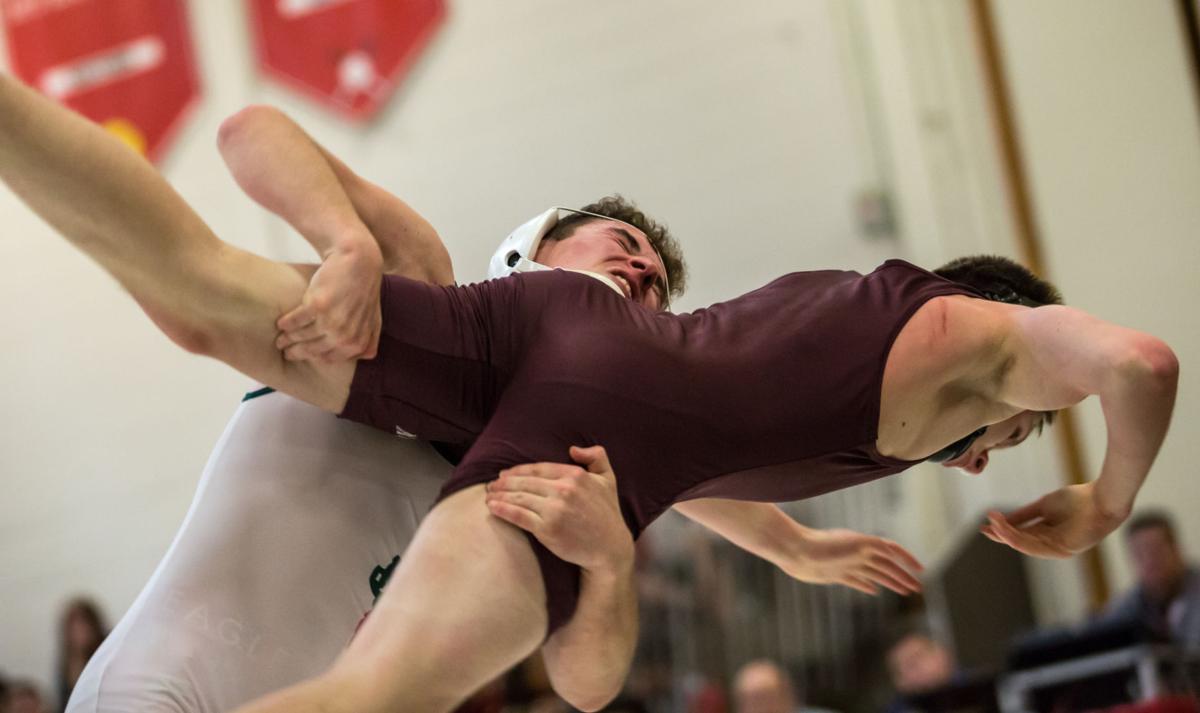 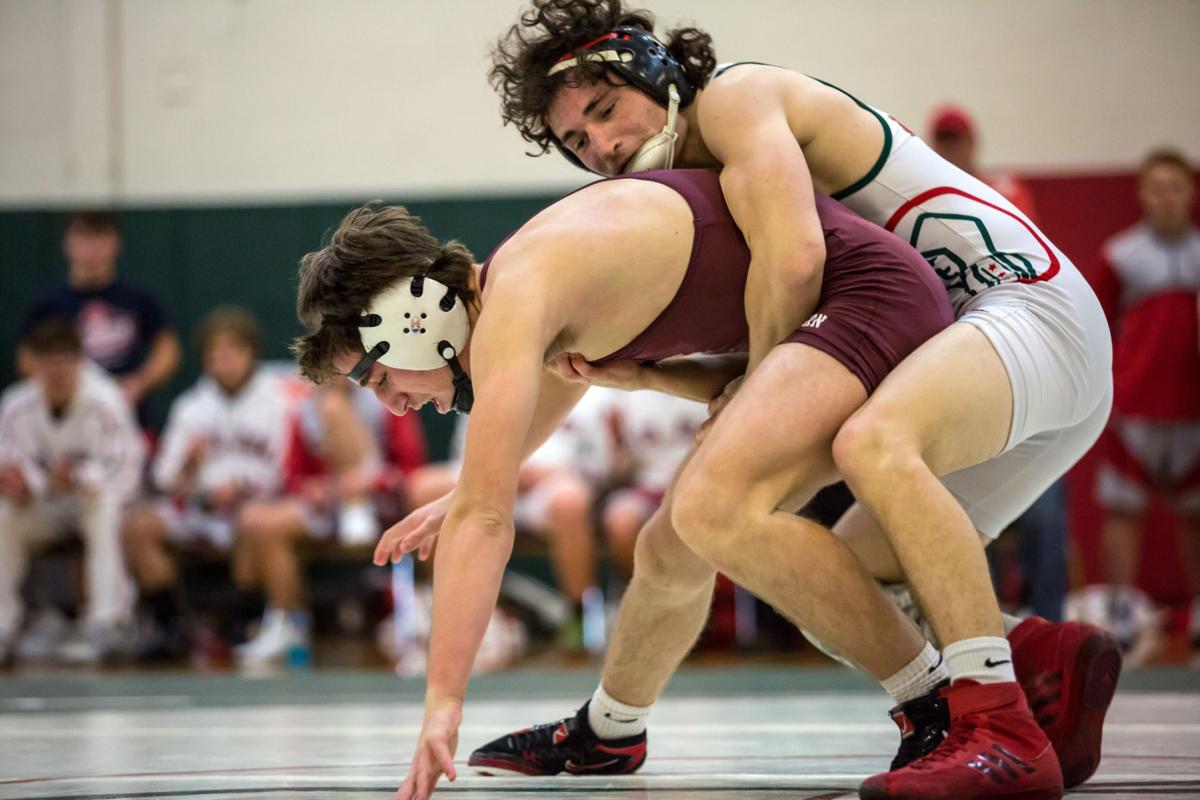 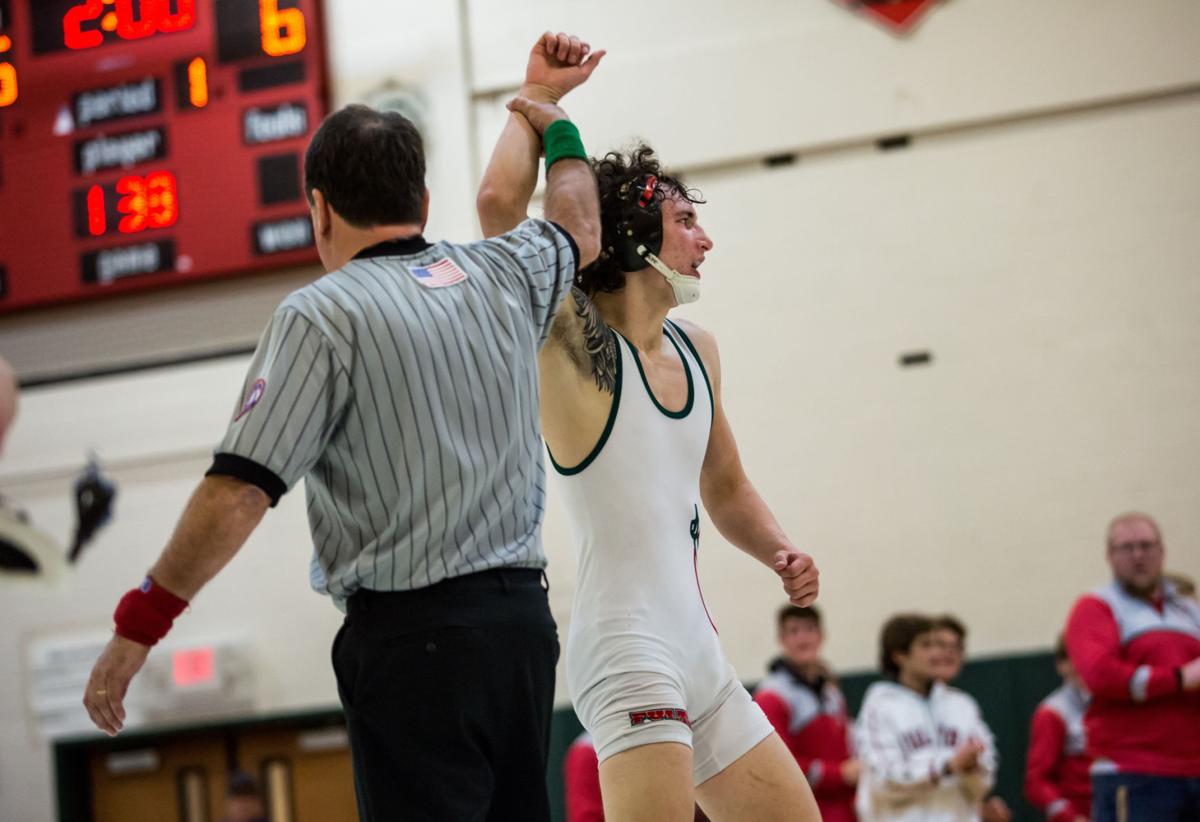 STEVEN J. PALLONEFulton senior Cole French (right) has his hand raised after winning the 138-pound match during a varsity wrestling dual meet against Auburn on Dec. 9 at the G. Ray Bodley High School gym in Fulton. 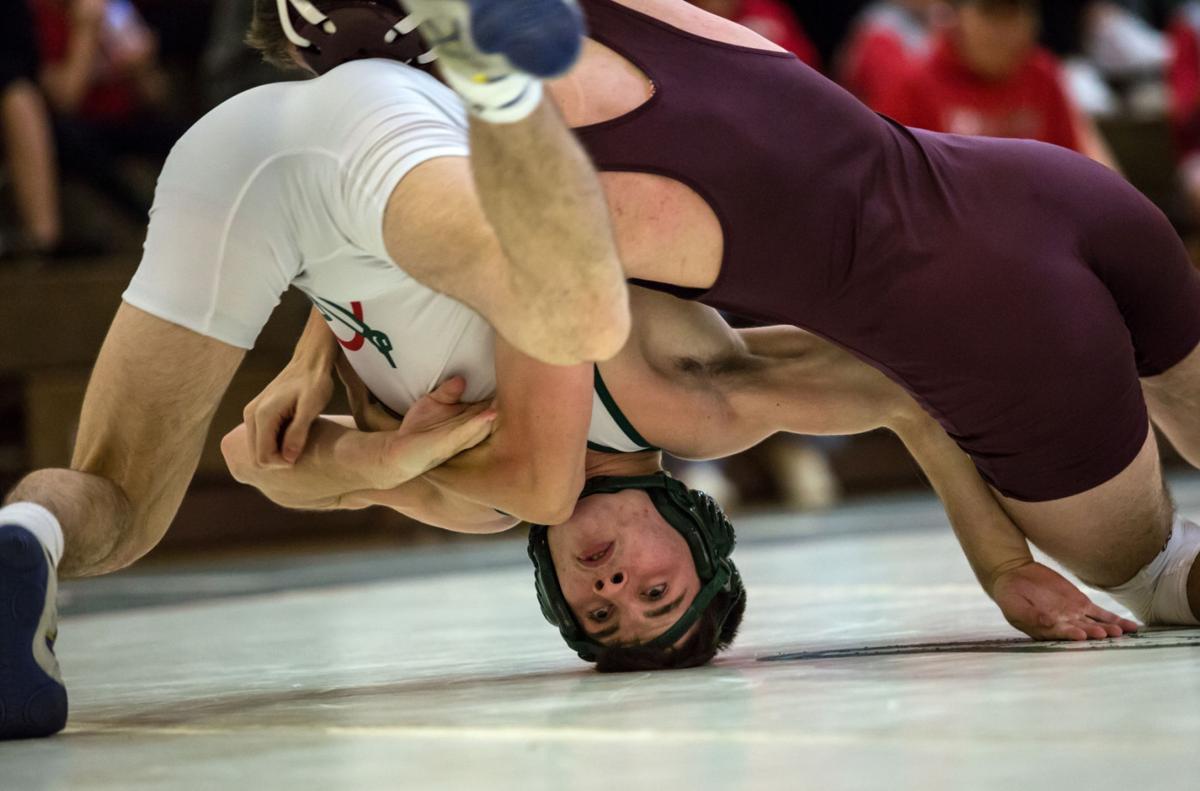 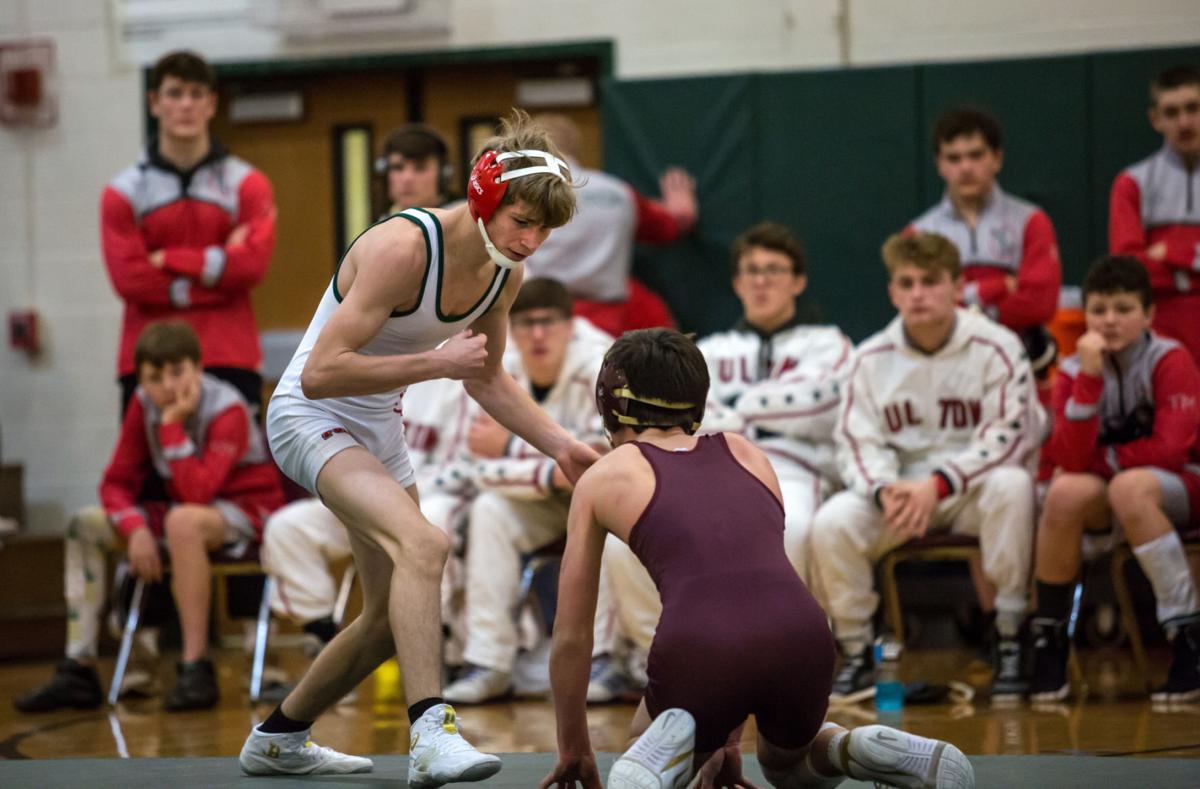 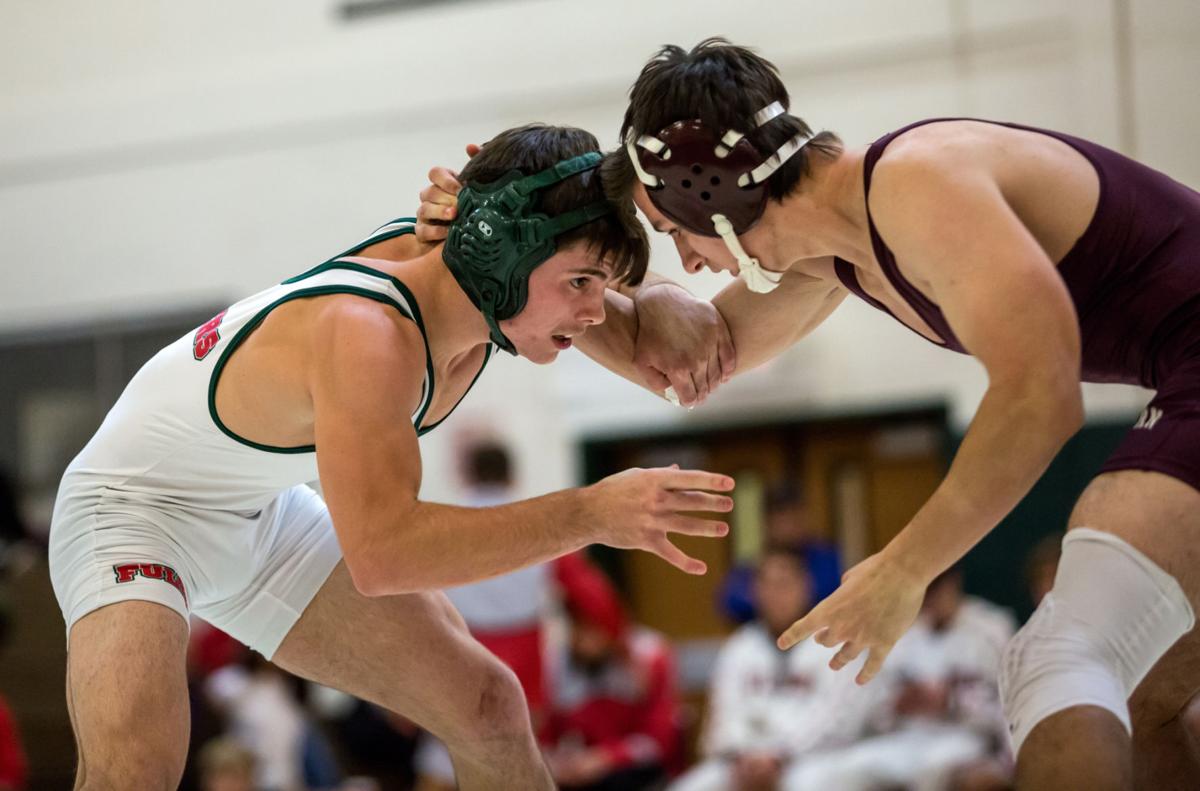 STEVEN J. PALLONEFulton senior Cole French (right) has his hand raised after winning the 138-pound match during a varsity wrestling dual meet against Auburn on Dec. 9 at the G. Ray Bodley High School gym in Fulton.

FULTON — The Fulton (G. Ray Bodley High School) varsity wrestling team is constantly aiming to outdo the previous season while in the midst of a prolonged and unprecedented period of success, and this year’s squad is also looking to eclipse past generations.

The Red Raiders entered the week with a perfect overall record of 16-0 after winning the Linda Stewart Duals at Colonie last weekend, including a 44-27 victory over defending state dual meet champion Massapequa in the finals of the prestigious annual tournament consisting of the state’s top contenders.

Fulton is pursuing its record sixth straight Section 3 championship, no team has ever won more than five titles in a row, and enters the week with 981 all-time dual meet wins on the chase for its historic 1,000th victory.

There are only four other high school programs in the country and none within the state to reach the 1,000-win milestone, according to a report in N.Y. Wrestling News.

“The past year’s wrestlers, we’re always trying to do better than what they did and if we can, then everyone will do great things,” said senior Andru Walts, who is off to a 13-1 start in his fourth varsity season. “We had Cam Galvin place third in the state last year, and now everyone wants to do third in the state or better. Chasing him will help push us and help push him. … The tradition is everything at Fulton, just to better than the past year and keep improving.”

Fulton has also won the Class A sectional title every year since 1986, and is the only program to reach the state dual meet semifinals in each of the tournament’s two years of existence.

Fulton is well-equipped to continue its reign with five returning state tournament qualifiers and three Section 3 individual champions, including senior Cam Galvin, who is 15-0 thus far according to cnywrestling.com and placed third in the state at 160 pounds last year. Galvin was the program’s highest place-finisher at the state meet since his uncle, Matt Bogardus, finished second at 160 in 2008.

Juniors Sam May (138 pounds, 12-2 record) and Dominick Hoffman (106, 15-0) are also off to strong starts in defending their respective sectional titles, while senior Cole French (132, 14-1) is a 2018 sectional champion looking to regain the top spot in his division as a senior.

“We just go to the wall every day in practice, and coaches are pushing us their hardest every single day,” Galvin said. “Most of our guys get close to 50 or 100 matches during the offseason, so we’re putting the work in year-round.”

Fulton coach Jeffrey Waldron, in his sixth season as head varsity coach after eight years working with younger levels of the program, credited his team’s prominence to the depth and popularity of the area youth leagues along with the avid offseason commitment of wrestlers and their respective families.

Waldron said that this past summer, the team travelled to camps at Cornell University and others in Pennsylvania and Ohio. That was on top of several locally-based clinics and regular daily offseason workouts, and several wrestlers also attended individual camps and clinics in addition to the litany of team-based activities. The varsity wrestlers also work regularly with younger students in the district throughout the season, holding demonstrations and giving speeches to extend the team’s reach and introduce new kids to the sport.

“In Fulton, wrestling is not just a sport, it’s a lifestyle,” Waldron said. “We have a lot of community support and right now our pee-wee program has 80 kids signed up for wrestling.”

He added: “It’s not just about teaching wrestling moves, every school teaches that, we’ve got to get the kids to buy into our culture. We wrestle year-round, not a lot of programs are willing to do that. … The commitment of our wrestlers and our coaching staff, I don’t think anybody else can match it.”

Galvin and Bogardus are two of several standouts motivated to outdo family members that have contributed to the program’s sustained success. Walts, Burlingham, and several others come from decorated families within the Red Raiders’ lore.

“They’re excited about the chance to go down in history,” Waldron said. “No team has ever won six sectional championships in a row, no team in New York has 1,000 dual meet wins, so they’re doing things that no one has ever done before and I think that helps motivate them and get them excited.”

Fulton’s next major challenge is scheduled for 7 p.m. on Jan. 4 against state power Spencerport at the Fulton War Memorial. That highly-anticipated showdown will be preceded by a college match pitting Oswego State University against Rochester Institute of Technology in the same location.