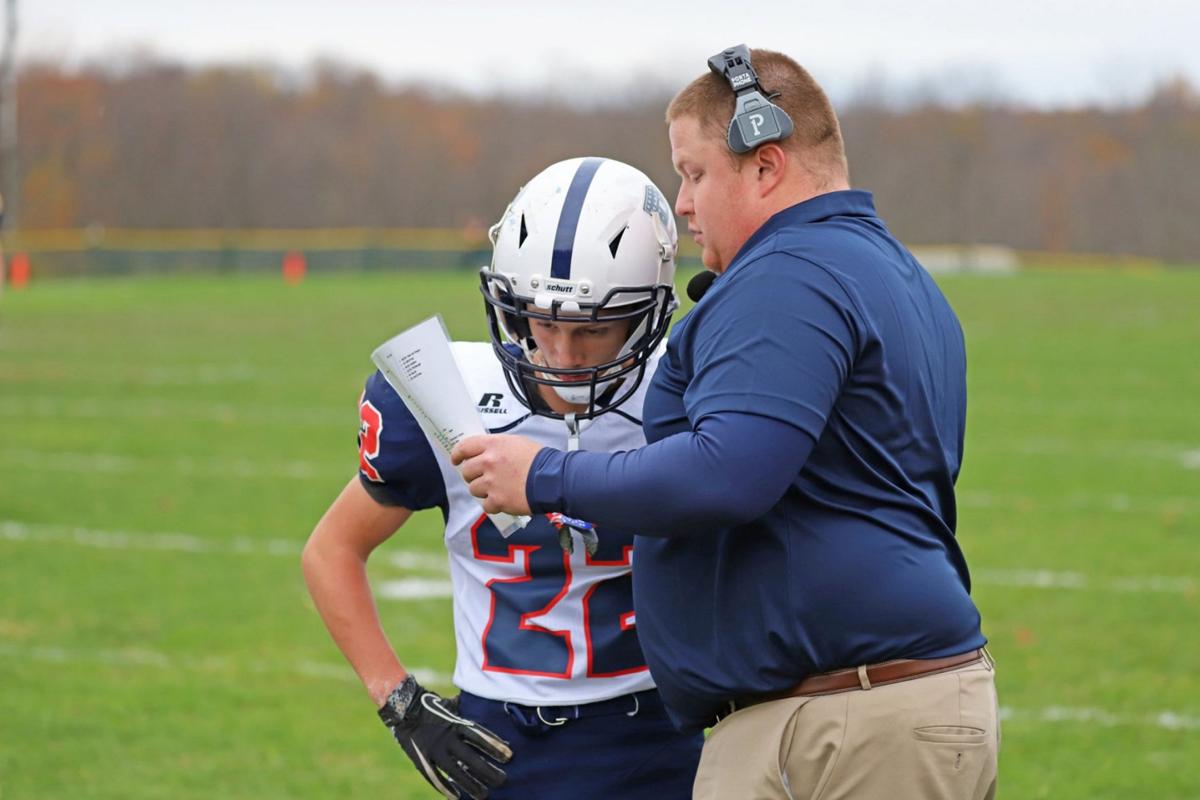 Pulaski varsity football coach Paul Monnat, right, talks to one of his players during a 2019-regular season game. Photo provided by Paul Monnat. 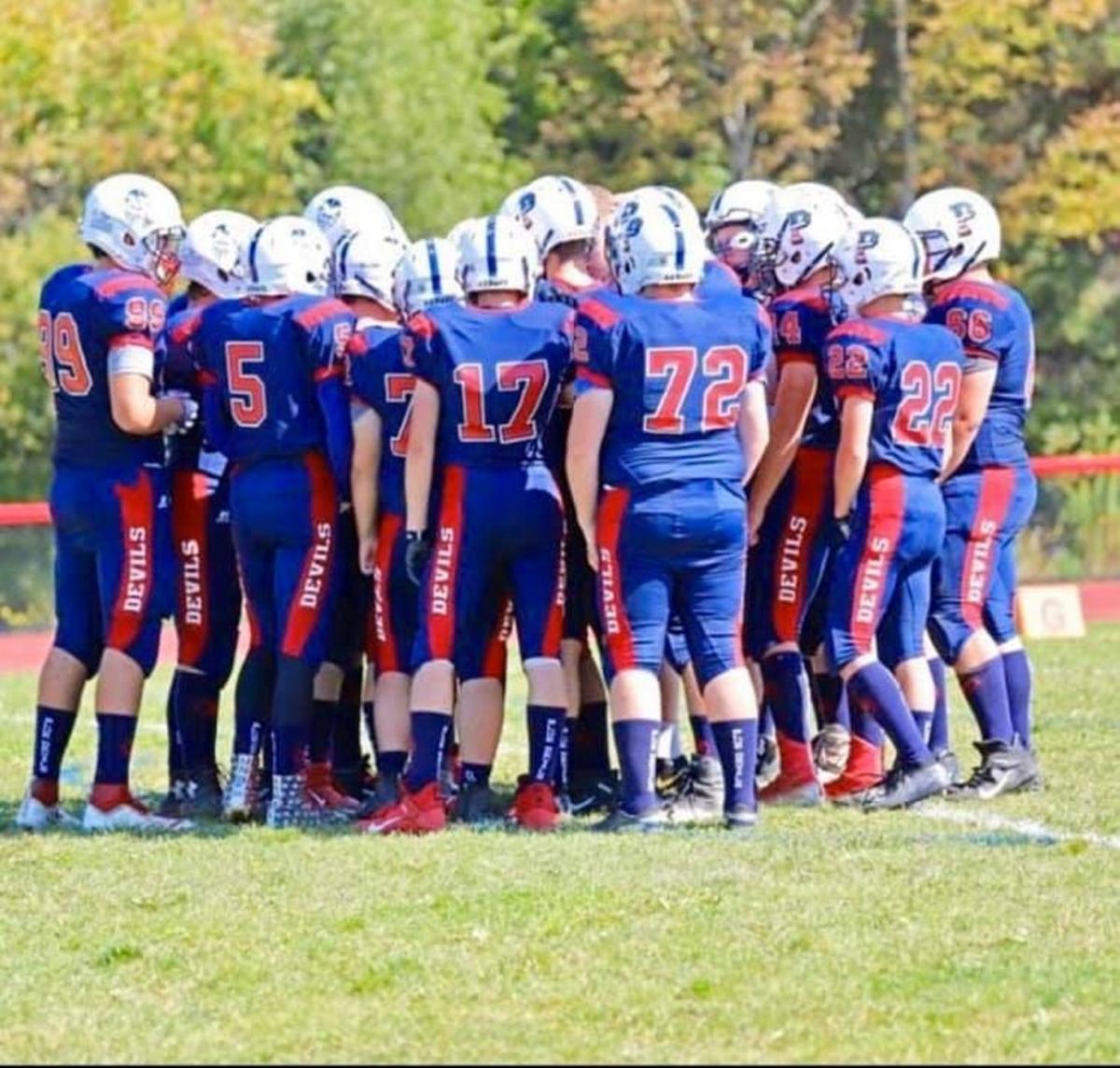 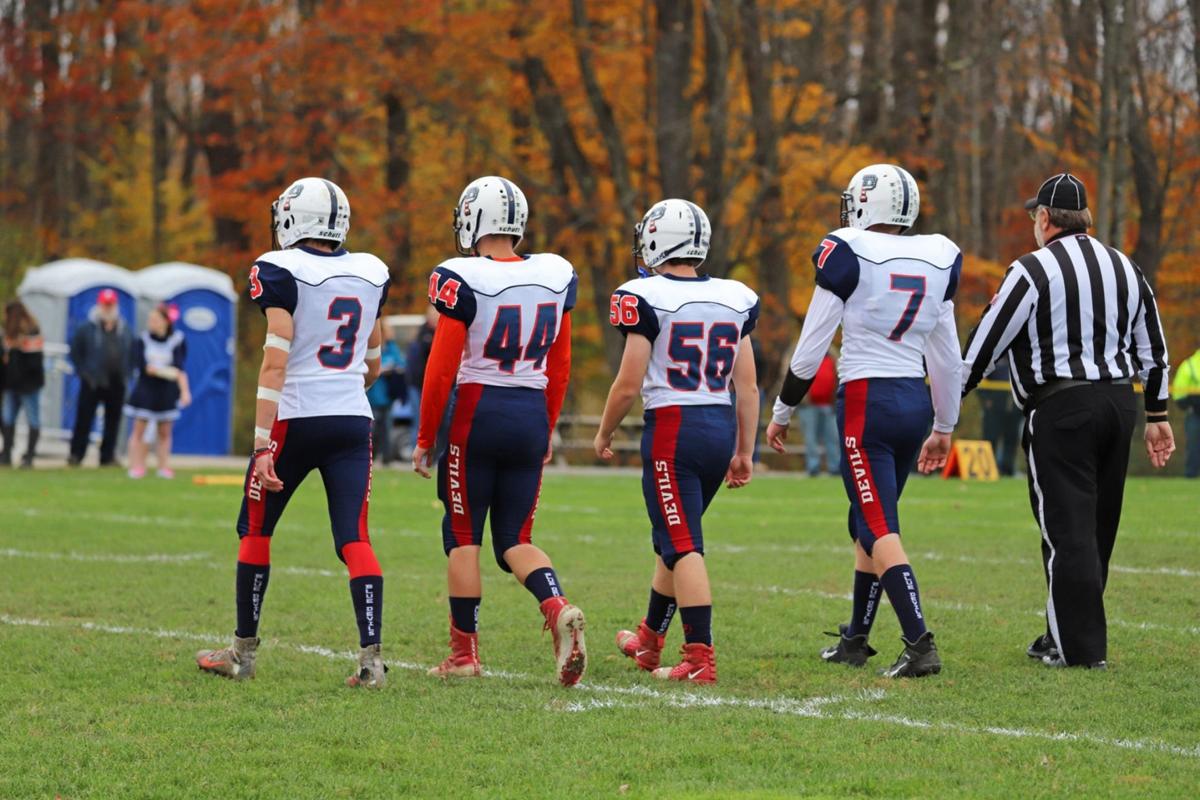 The Pulaski varsity football captains take the field for the pregame meeting with officials before a 2019 regular-season game. Photo provided by Paul Monnat. 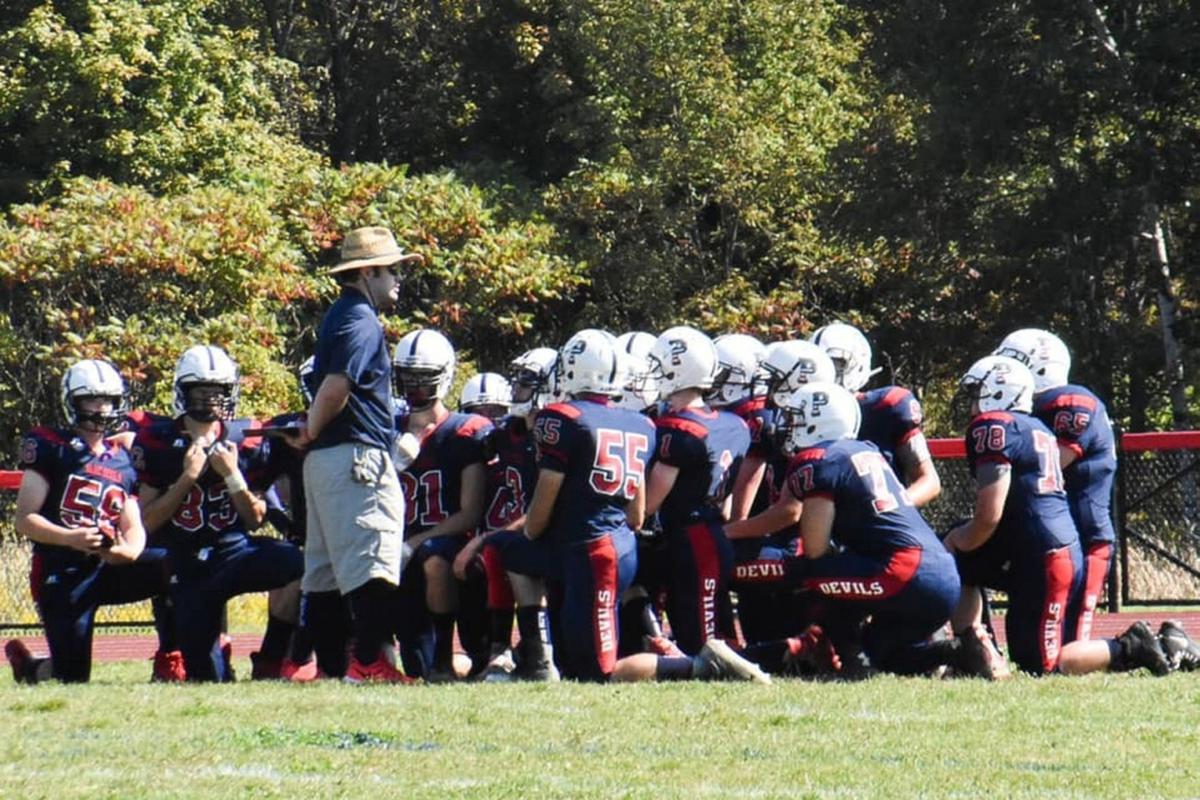 Pulaski varsity football coach Paul Monnat, right, talks to one of his players during a 2019-regular season game. Photo provided by Paul Monnat.

The Pulaski varsity football captains take the field for the pregame meeting with officials before a 2019 regular-season game. Photo provided by Paul Monnat.

PULASKI — Pulaski head varsity football coach Paul Monnat walked by sophomore Austin Dufrane seated in a high school hallway in late February and mentioned that the program might be on the verge of moving from eight-man back to traditional 11-player football for the upcoming season.

Dufrane — a sophomore starter at center and defensive line in 2019 with two varsity seasons ahead — jumped up and emphatically shook his coach’s hand while expressing his excitement, channeling the reaction of his Blue Devils teammates and the football community that followed a few days later.

Pulaski was approved by its board of education prior to recent school closures to move to the Section 3 Independent Division for the upcoming high school football season, returning to the familiar format after three seasons in the league’s Eight-Man Division.

“I love 11-man football because it’s what I’m used to, it’s just what everybody knows and so it’s exciting to get to be a part of it again,” Dufrane said during a recent phone interview.

“Most of our (new) teammates don’t really understand eight-man and how that goes, they’re more used to 11-man, so they’re even more excited than I am,” he added. “They can watch games on TV and they can put things into their own game, and they can kind of picture themselves out on the field in a way. We were ecstatic when we found out.”

The Blue Devils will join a conference that consists of five Oswego County teams among its seven squads, renewing annual series with other areas teams to add to the excitement of what Pulaski athletic director Jim Karcz referred to as a program rebirth.

“It’s definitely exciting and should get some good backing behind the program, and we’re going to be playing a lot of teams that we already know,” said Pulaski junior Jack Carnes, a two-way lineman and linebacker who will enter his third and final varsity season next fall.

Karcz said that the move had been in the works as far back as last fall when projected participation numbers for the 2020 season showed a path to safely field an 11-player team. He participated in meetings among area athletic directors throughout the past school year that ultimately led to the formation of the Section 3 Independent Division that was announced in mid-February.

After discussing the potential move with coaches and players, Karcz presented a proposal to the board that was approved a few weeks after the new Section 3 alignments were announced. The team completed the process to join the Independent Division in time for the league’s schedule release earlier this month.

“We looked for a way to have kind of a rebirth for our program,” Karcz said. “The Eight-Man League was a good way to keep it afloat through the last couple years, but the way our numbers have been trending, we were looking to revitalize and in turn it really has. We brought it to the kids and their interest really peaked with the 11-man football.”

Monnat — a 2011 Pulaski graduate — took over the squad in 2017 when injuries and difficulty restocking from a recently graduated class of 14 seniors left the team with no alternative but to adopt the new eight-man format or forfeit its season.

The state requires at least 16 active players to field a traditional squad, and most small-school teams that have come close to that threshold in recent years have converted to eight-man.

Interest has grown steadily over the past two seasons, Monnat said, and there were roughly 25 players signed up and even more attending interest meetings and weight-room sessions prior to recent school shutdowns due to COVID-19.

“There were practices during my first year where we had six or seven guys, and last year, we were able to finish the season with enough players that would have been good enough to play 11-man,” Monnat said. “We’ve been able to revamp the interest and get some more kids involved, especially at the lower level. Now we’re at a point where we have as many guys in our program as some of the other small schools around us, so we can be comfortable making that move.”

Players like Dufrane and Carnes started as seventh graders in the modified program, which plays 11-on-11 much like the youth leagues in which they were introduced to the sport. Coaches and players credit the eight-man league for the program’s survival but acknowledge that the goal has always been to increase participation to return to the traditional format.

Pulaski’s new league will significantly cut down on travel time and expenses, and potentially restoke geographical rivalries. The Independent Division also includes Mexico, Oswego, Phoenix and Altmar-Parish-Williamstown, along with Port Byron and Fowler.

Pulaski, which is slated to host Fowler in its season opener on Sept. 12, has also scheduled a nonleague game against Sandy Creek.

“We know a lot of people in the area (from surrounding schools) and now you can talk about who’s going to win, it’s kind of a fun competition,” Dufrane said. “You drive by the schools all the time, like Mexico has a nice-looking field, and now when I drive by, I can think about getting a chance to sack the quarterback on that field or something. It’s kind of cool to just picture now.”

Schedules for all Section 3 teams were recently released. Entering the week, Section 3 was still awaiting word on a state ruling that could allow teams to convert their opening-week scrimmages on Sept. 5 to a regular-season matchup.