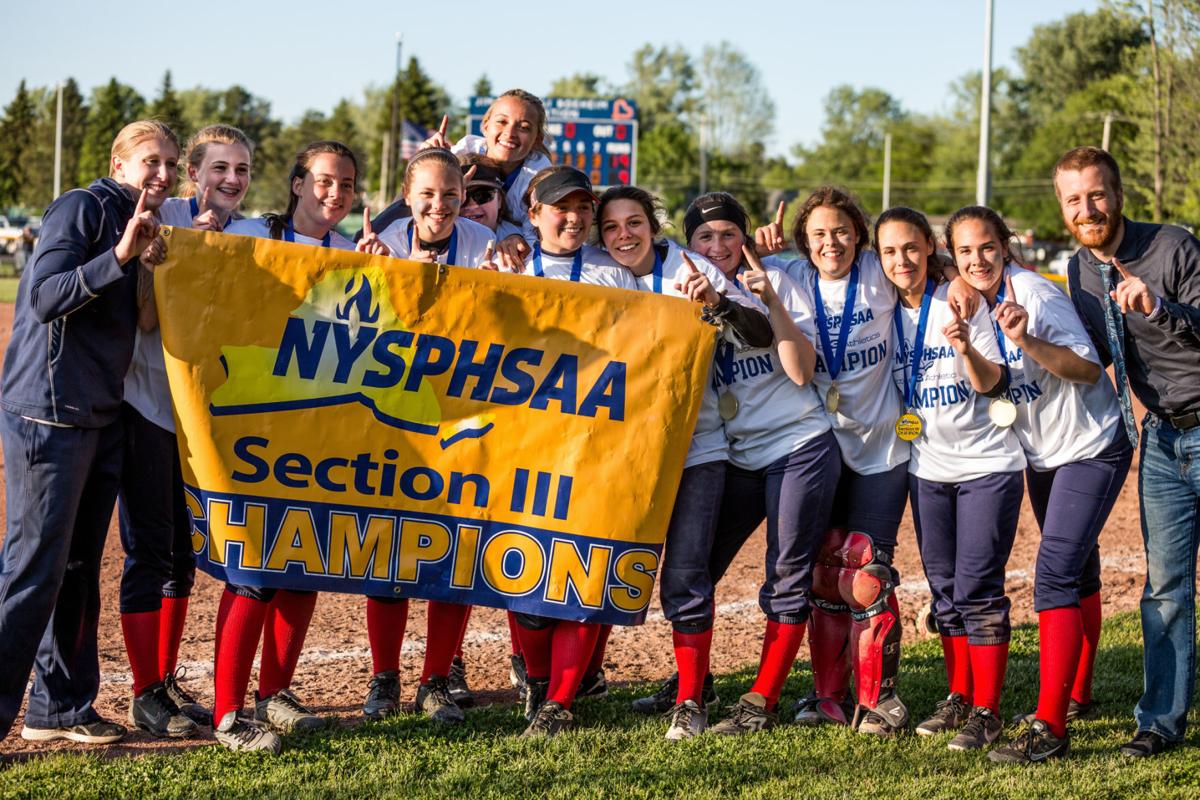 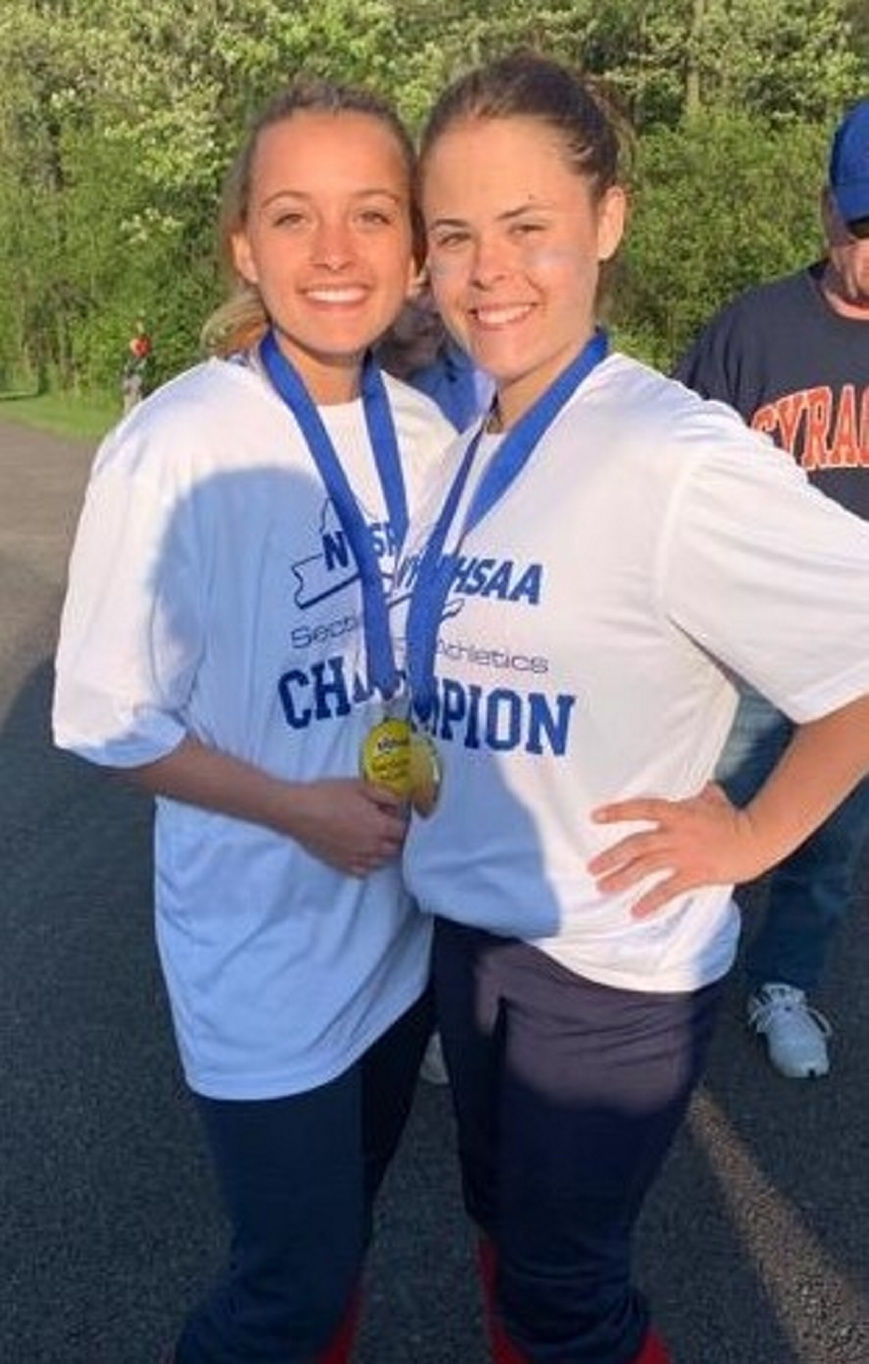 Pulaski varsity softball players Jordan Burdick, left, and Kaitlin Reynolds after winning the Section 3 Class C championship last year. The duo was slated to be the longest-tenured seniors for the Blue Devils this spring. Provided photo. 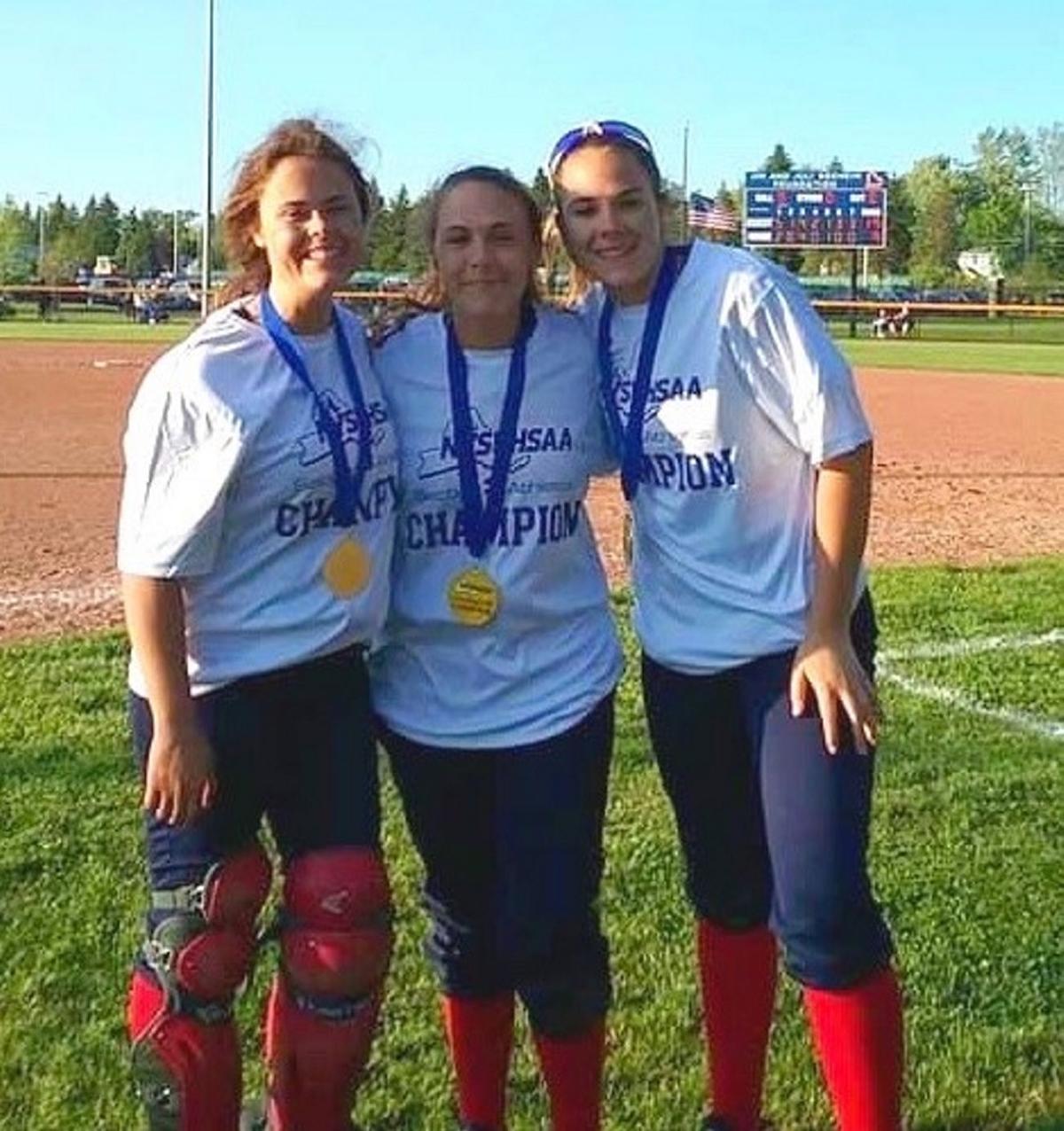 Pulaski varsity softball players, from left, twin sisters Kaitlin and Cara, and their younger sister, Clare, after the Blue Devils won the Section 3 Class C title last year. Kaitlin and Cara were set to be two of three seniors this spring. Provided photo. 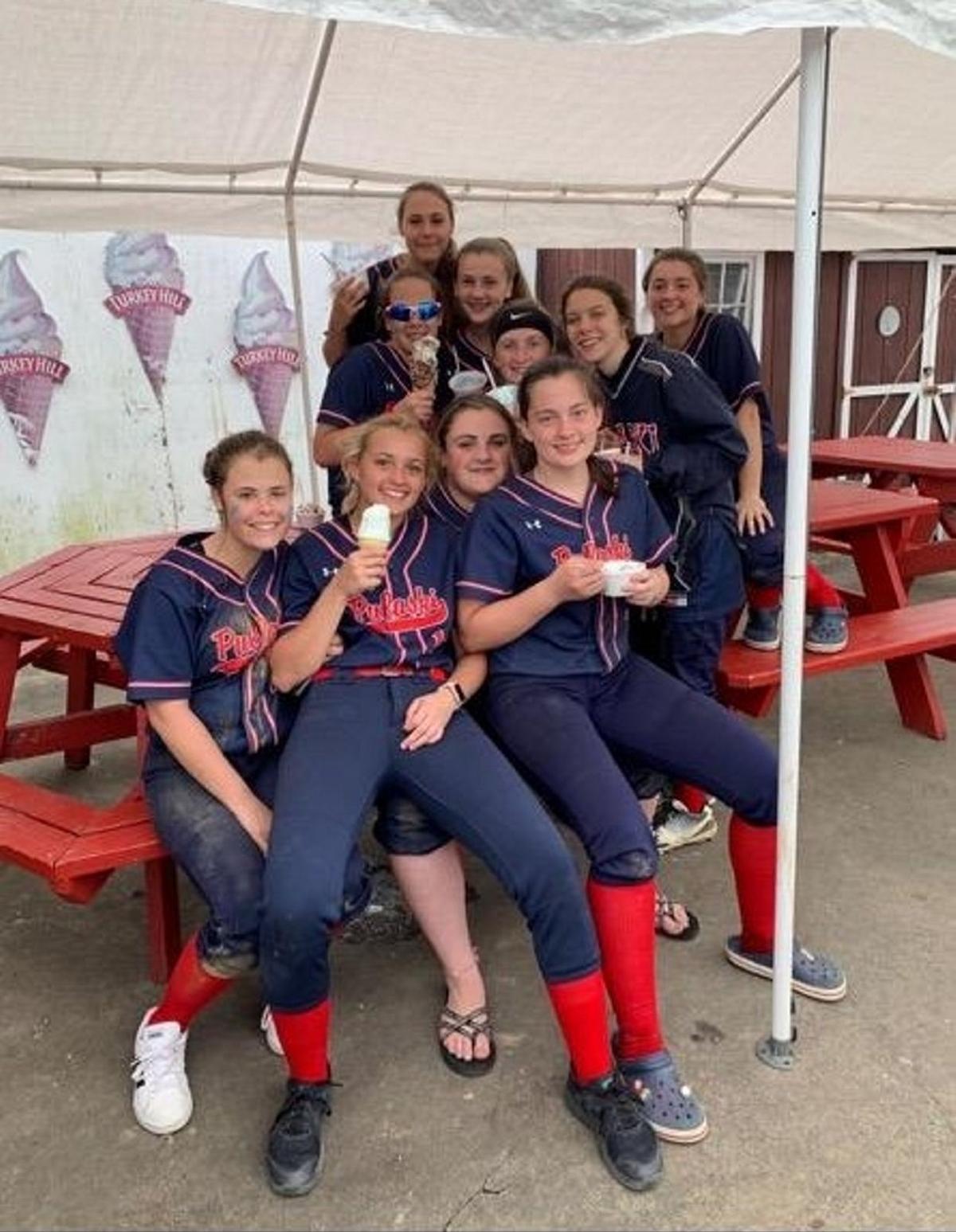 Pulaski varsity softball players Jordan Burdick, left, and Kaitlin Reynolds after winning the Section 3 Class C championship last year. The duo was slated to be the longest-tenured seniors for the Blue Devils this spring. Provided photo.

Pulaski varsity softball players, from left, twin sisters Kaitlin and Cara, and their younger sister, Clare, after the Blue Devils won the Section 3 Class C title last year. Kaitlin and Cara were set to be two of three seniors this spring. Provided photo.

PULASKI — Though not the ending they envisioned for their high school softball careers, three Pulaski seniors will get to fondly recall their final moments on a Section 3 diamond among a series of uplifting memories from their time with the program.

The Blue Devils won the Section 3 Class C softball championship last season for the first time in 11 years and was anticipating the returning senior trio — twin sisters Kaitlin and Cara Reynolds, along with fifth-year varsity member Jordan Burdick — to help lead the pursuit of a title defense.

“To play with all of those seniors (last year) and everything that we had been working hard for so many years, to see that it really paid off was just awesome,” Burdick said. “Everyone was just so happy, and it’s kind of a feeling that stays with you forever.”

The Reynolds twins were also anticipating their last season on the field together along with their younger sister, Clare, who started at shortstop last season and is expected to be among the senior leaders for the 2021 squad.

The family moved back to the area from Massachusetts, where they were heavily involved with travel softball, prior to Kaitlin and Cara’s freshman year. Kaitlin Reynolds quickly became the starting varsity catcher as a freshman while Cara opted not to play initially.

Cara Reynolds decided to re-join her sisters on the softball team last season, and said she is grateful that she made the decision and was able to play one season with her family. She started in right field for last year’s sectional final.

Kaitlin Reynolds worked with Cara before and after practices to help her sister get back into the swing of things throughout last season.

The productive sister trio also provided endless entertainment at practices and, along with last year’s other sister tandem of Kaitlyn and Emilie Birmingham, often brought their teammates into their natural sibling debates.

“They have quite their own dynamic,” LeBeau said. “Sometimes the sibling rivalries would come into play during practices and we had to have our moments where we would stop and say: ‘OK, these are your bickering moments that need to happen at home.’ Then we would laugh about it and move on. They were pretty lighthearted as far as that went, but I think that competitive edge among them helped make them better players.”

Kaitlin Reynolds said of her sisters, Cara and Clare, joining her on varsity: “I loved playing with both. We’re sisters so we’d fight and argue sometimes but that’s the fun of it, it’s who we are. We know we’re joking at times, so we understand each other.”

Burdick was anticipating the start of her fifth varsity season as a versatile, experienced utility player. She started at center field and left field during Pulaski’s title run last year while providing a timely bat in the lineup. She was potentially in line to take over at second base for her senior campaign.

Burdick has been a valuable member of the program and a constant presence at voluntary offseason workouts, according to LeBeau, throughout her varsity tenure. Burdick and Kaitlin Reynolds have played travel ball together for CNY Elite since the Reynolds family returned to the area.

Expected to be the two longest-tenured varsity players this year, Burdick and Kaitlin Reynolds have also worked to help ensure the team’s unique rituals will live on.

Before each home game, the team gathers with a large stick on top of a hill overlooking the field and perform chants and share other messages to get pumped for the game ahead. One player would also be assigned to make rice Krispies treats in the color of the opposing team, and they devoured them before each game to symbolize their intentions.

The group also fondly recalls dancing and singing on long bus rides, laughing at the unusual positions that teammates would fall asleep in, and the series of handshakes that must be completed before certain players could take the field. Burdick also shared a personalized handshake with her dad before every game.

“I’ll miss all of the superstitions we had before the games, the dancing, and just playing and enjoying those things with everyone that we’ve been with here for a really long time,” Burdick said.

Burdick was enrolled in the nursing program at CiTi BOCES and plans to attend Jefferson Community College next year to obtain her registered nurse’s degree. She had planned to focus solely on school but said she is now considering trying out for softball after losing her final high school season.

Pulaski’s senior softball trio has remained in strong contact with their teammates through a group chat on the Snapchat social media app, frequently discussing the many unexpected turns of the last few months. The Reynolds sisters hosted a team sleepover for returning team members prior to recent COVID-19 school shutdowns and the team has plans to socialize as a group this summer if the situation allows.

LeBeau still ordered the planned 2020 team shirts for players and said that seniors would be welcome to join summer league practices if leagues are conducted.

While the senior trio was denied a final season to create more lasting moments, they remain grateful and remember nearly every detail from their triumphant finale to Section 3 softball a season ago. The Blue Devils’ sectional final win and subsequent state playoff loss capped off a 16-5 campaign, which reinvigorated the program after a five-win season the year prior.

“I’ll never forget winning,” Kaitlin Reynolds said. “My sister (Clare) actually made the last out and I just remember running up to her because she got hurt in the process, and just making sure that she was OK and then the realization hit in that we won, it was just such an amazing feeling.”

Cara Reynolds added: “It was my first year and I didn’t really expect anything out of it as a new player, and so when I was out in right field during our last couple outs of sectionals, I was like oh my gosh we actually have a chance of winning this. I kept looking at the scoreboard, I was just amazed by the whole thing.”