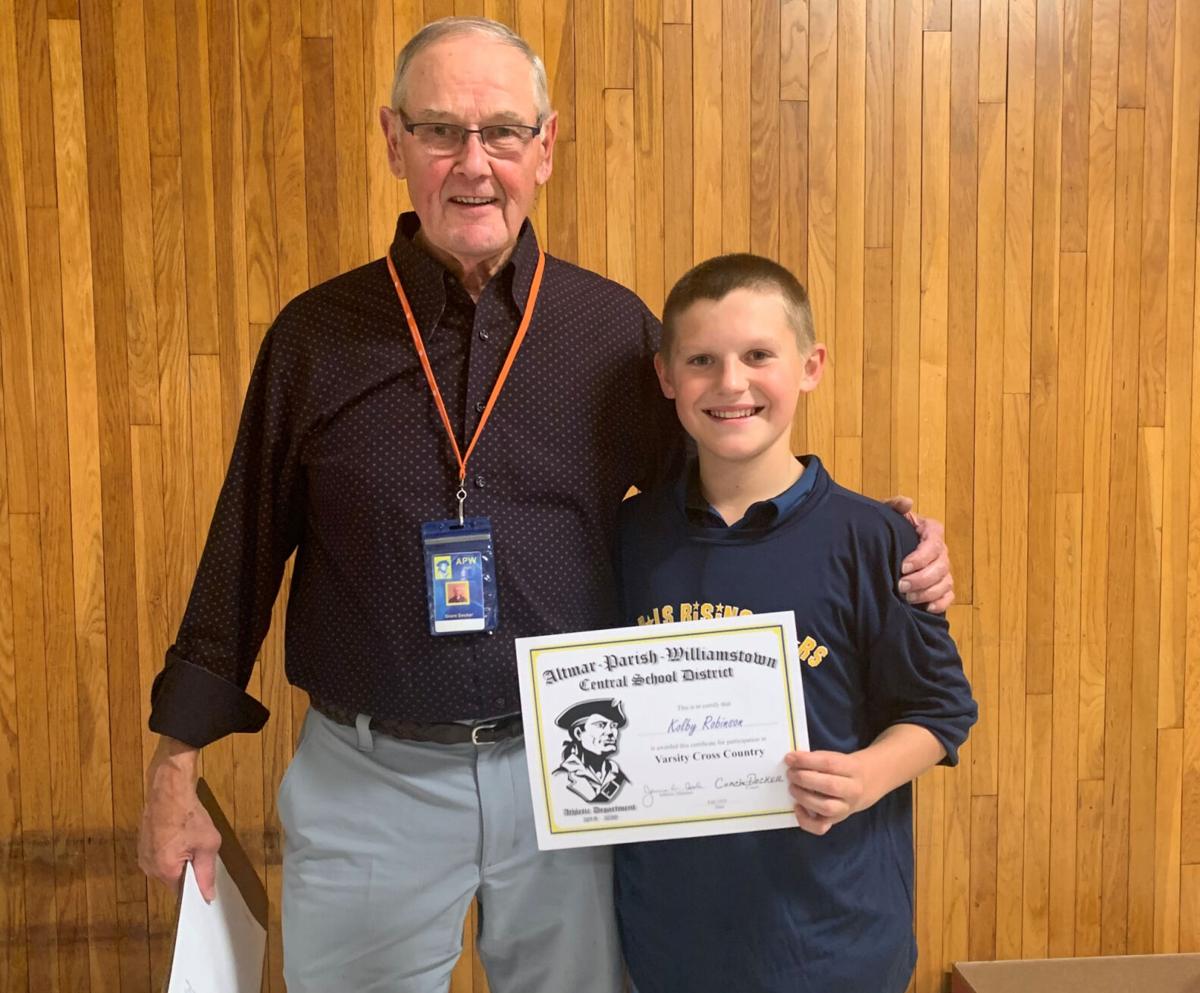 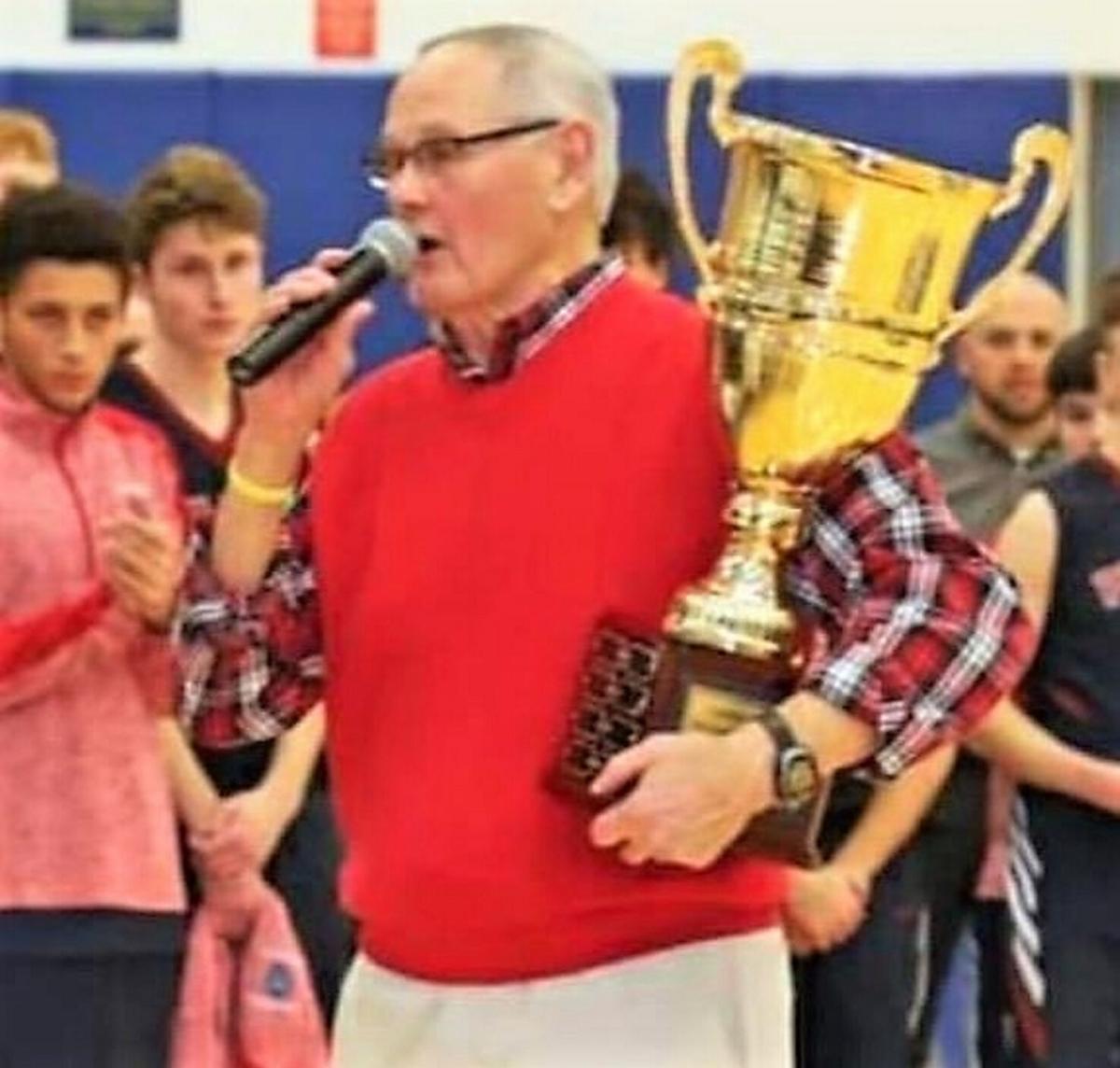 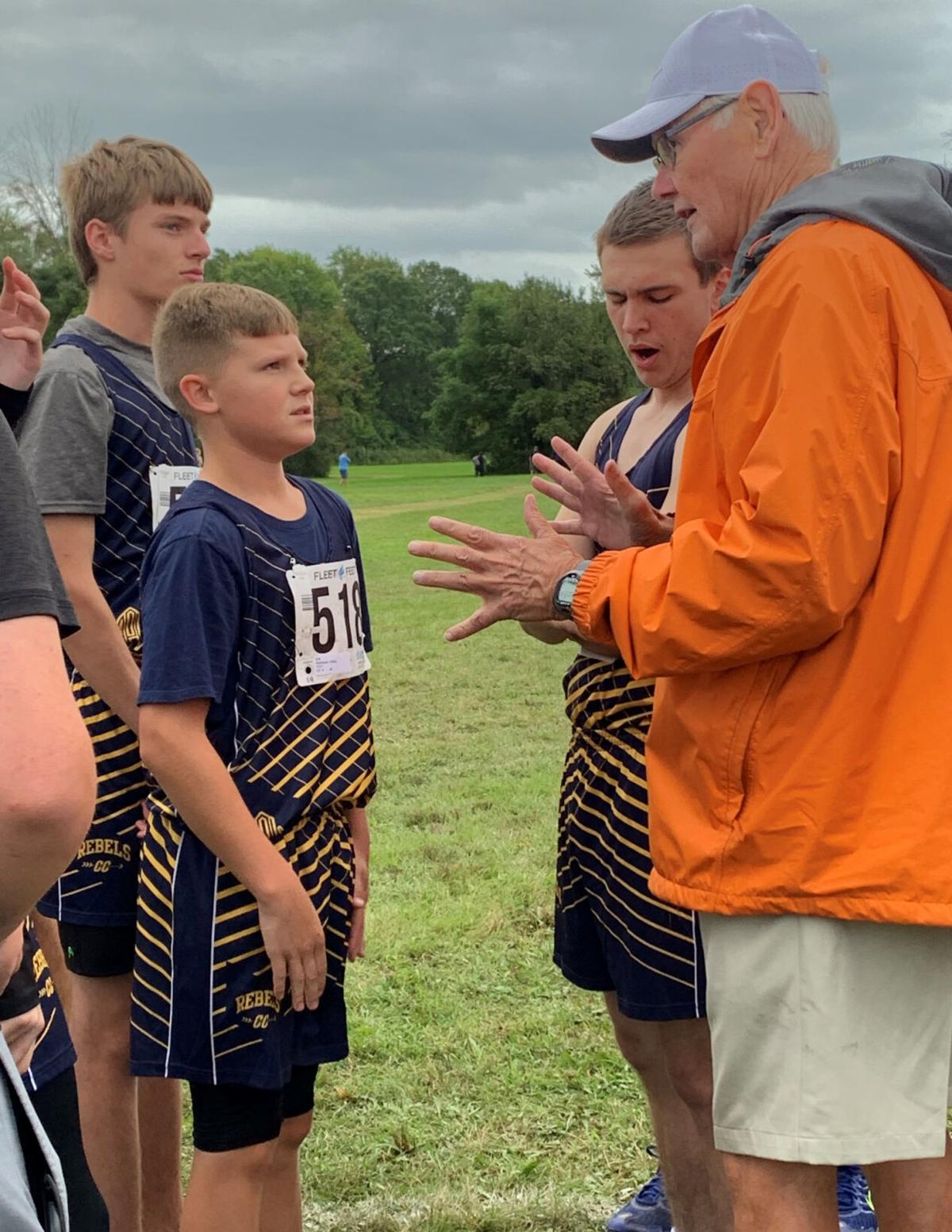 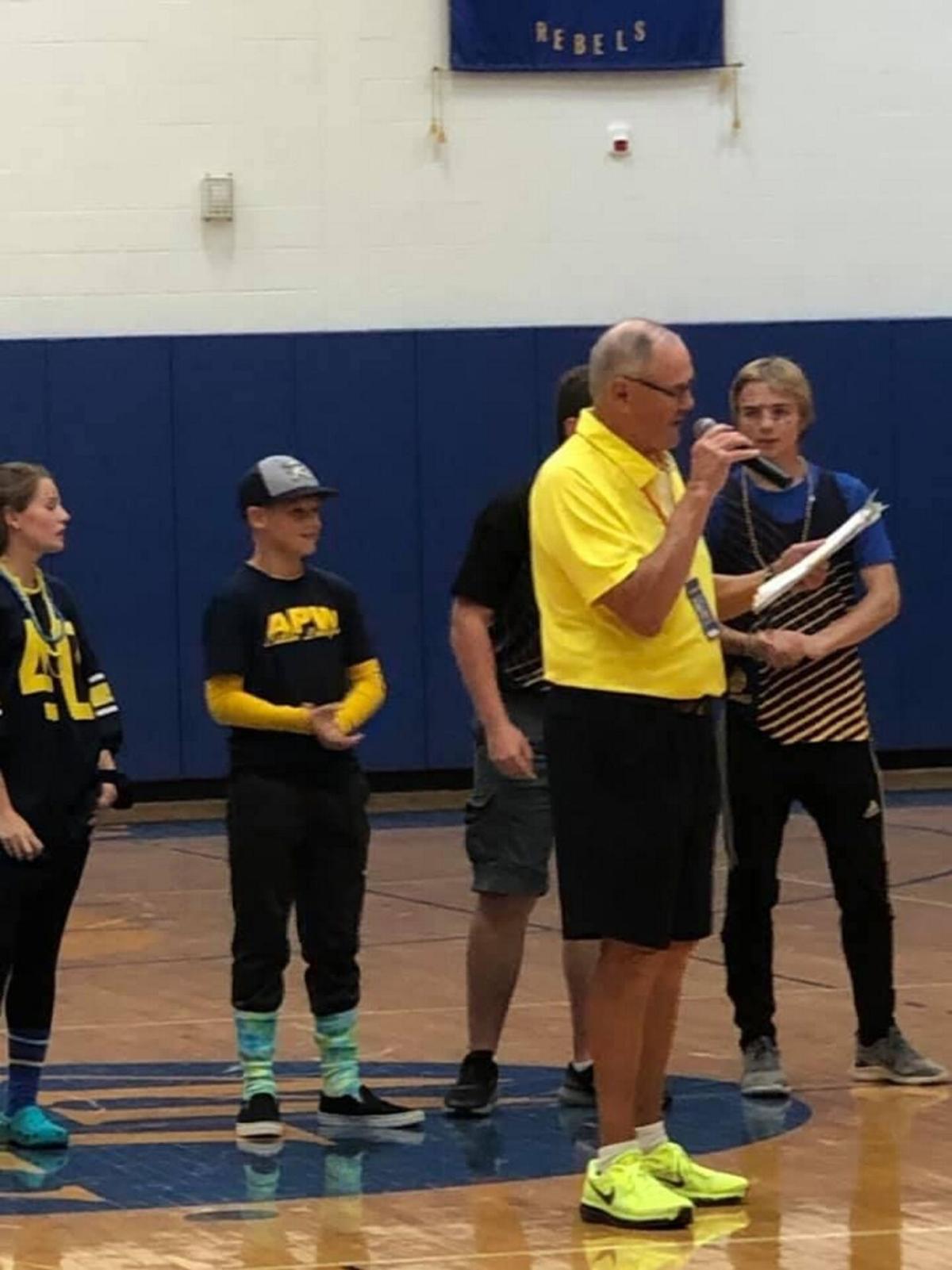 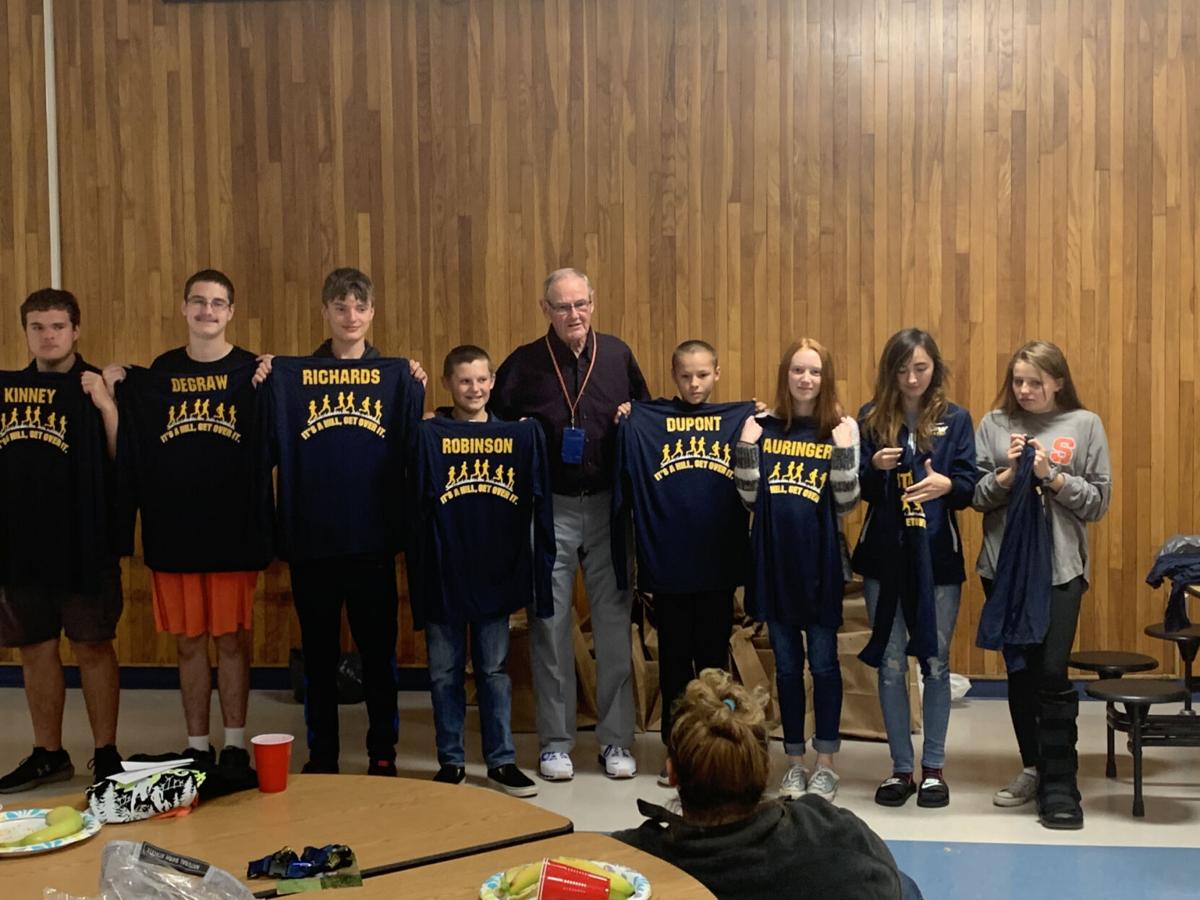 PARISH — Kolby Robinson and his Altmar-Parish-Williamstown cross country teammates are running with heavy hearts and a greater purpose this fall — joining the Rebels’ community in mourning the loss of coaching icon, Grant Decker, their former mentor and friend.

Decker died on Aug. 25 at the age of 76 after a near 50-year career as a coach and physical education teacher in the APW district. Decker most notably coached boys basketball, cross country, and track and field at various levels, and guided modified teams in each sport as recently as last year.

Decker, who was initially hired in 1972 and retired from teaching in 2010, frequently returned in recent years to take the helm for any APW team in need of a coach, including varsity cross country last fall.

“I hope he left us knowing how much he had an impact on everyone,” said Robinson, an APW sophomore who is one of the many athletes that developed a strong bond with Decker throughout his career. “He was one of the most kind-hearted people that I’ve ever met in my life, and he got the best out of everyone he knew. He was like a true role model for me and many other people.”

Decker served as APW varsity boys basketball coach for more than 40 seasons and the high school court was named in his honor in 2012. Decker — who was born in Malone and graduated from Brushton-Moira High School before attending The College at Brockport — was named to the Section 3 Basketball Hall of Fame in 2008.

He also guided the APW cross country and track and field programs for much of that period, leading three sports nearly every year of his coaching career.

“For those 48 years, he just loved this community and he lived for it,” said APW athletic coordinator, Scott Stanard, a 1990 graduate who has played for and coached alongside Decker.

“He has been an APW Rebel for almost 50 years, and in that entire time, he’s been nothing but a Rebel,” Stanard added. “You never heard him talk about his life growing up or when he played basketball in high school or college, he just always talked about APW. He lived it every single day and he was here almost every single day from 1972 until this past March.”

Robinson decided to run cross country against his original plans this fall in tribute to Decker soon after learning of his passing.

APW varsity boys and girls cross country coach, Trisha Kling, spoke of ways to honor Decker’s memory with the team during their first practice this fall. The runners ultimately decided to print ‘Decker,’ on the back of their warmup shirts to wear before each meet to keep his principles in the forefront of their mind.

Kling also brought a pack of cards to practice and distributed one to each runner so that they could each take “a piece of the deck,” with them throughout the fall campaign.

“During the (season-opening) run, I just took into perspective what he taught me and what I need to do and use what he taught me to my advantage,” Robinson said. “We all knew that he was there with us and we were running for him.”

The cross country squad is one of hundreds that were deeply influenced by Decker throughout his long tenure. The Cicero resident became beloved in the area for his firm but caring approach, and for forming unique relationships with each athlete under his tutelage, according to many who played for him.

“He did not sugarcoat any part of his coaching,” Stanard said. “If you were doing good he made sure you knew you were doing good, and if you were stinking it up out there, he told you but he also let you know how to get better and if you were willing to listen to what he had to offer, you got better. … Every kid bought into what he was selling. He wasn’t selling you a lemon, he was selling you the sports car, and if you bought into it, you became a better player and you became a better person.”

Decker took time to get to know his athletes outside of their respective sport, and would frequently share his wisdom and experiences that far exceeded breaking down the X’s and O’s.

Stanard recalls meeting with Decker in the athletics offices in recent years, and his longtime mentor often having a video or article clipping ready to share with his teams and other interested coaches.

Dan Riley, who spent 26 years as a coach in Decker’s program between junior varsity and modified, remembers the wide-ranging talks on their shared ride to practice after each had retired from teaching.

Robinson also cherishes his time under the learning tree from when he helped Decker as a student-assistant coach for the modified girls basketball team, even sporting yellow socks to match the coaching legend’s signature wardrobe selection.

“It was one of the best times, even though I was on the court and he wasn’t coaching me, I was still getting stuff out of him,” Robinson said. “I was helping to coach, but he was coaching me at the same time, and I also got to know him way better and we really bonded. Even with away games on the bus, we just sat and talked about what he loved and about basketball.”

Riley said that Decker valued the trust level he developed with each individual athlete and possessed a constant concern for their well-being.

Stanard witnessed that first-hand as Decker’s starting point guard when after his role in a difficult loss — committing a foul in the final seconds to lead to game-winning free throws for the opposing team — Decker called the Stanard family home hours later to make sure he was coping OK before the coach could leave his APW office that night.

Decker wanted to help students having difficulty at home or in school, either academically or socially, and placed the greatest priority on developing all-around citizens and strong students through the sports he taught.

Riley believes those were the motivating factors behind Decker frequently returning to coach if he was needed after he retired from teaching, to ensure that athletic outlet remained in place for area kids.

“He did things like that, where it’s more than just coaching,” Riley said. “It’s working with the kids, respecting them, and making sure they go down the right path. He didn’t save them all, but I’m sure he stopped a lot of kids from going the wrong way.”

The APW and Pulaski boys basketball rivalry that Decker player a key role in cultivating has created the “Bud Jones/Grant Decker Cup,” to put on the line for their annual matchup. Decker has presented the cup along with family representing Jones, who is also deceased, in each of its three years.

At its height in past decades, the matchup was among the most highly-anticipated outings on the sports calendar and each school placed TVs in the cafeteria because they couldn’t fit all the attendees in the gym.

This past February, Decker excitedly took the microphone after the 45-42 victory by the Blue Devils and presented the trophy to his former rival team.