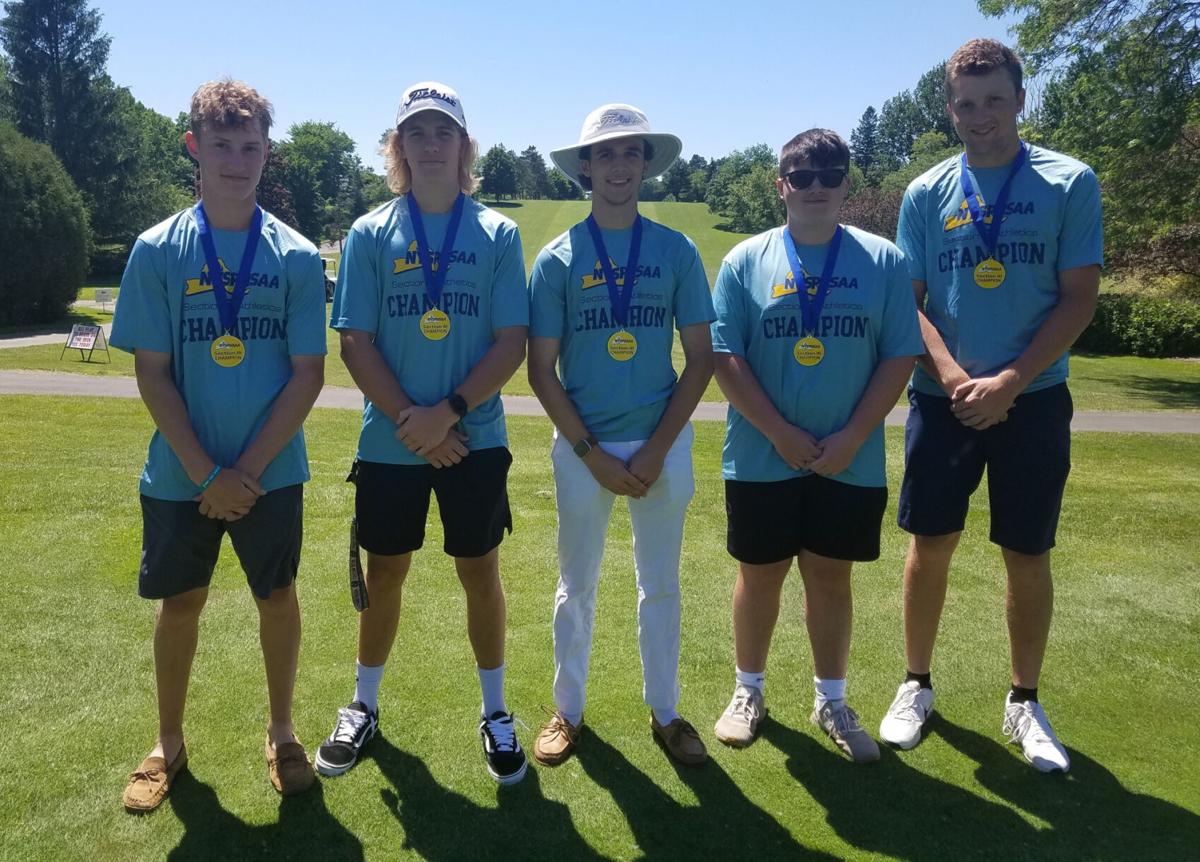 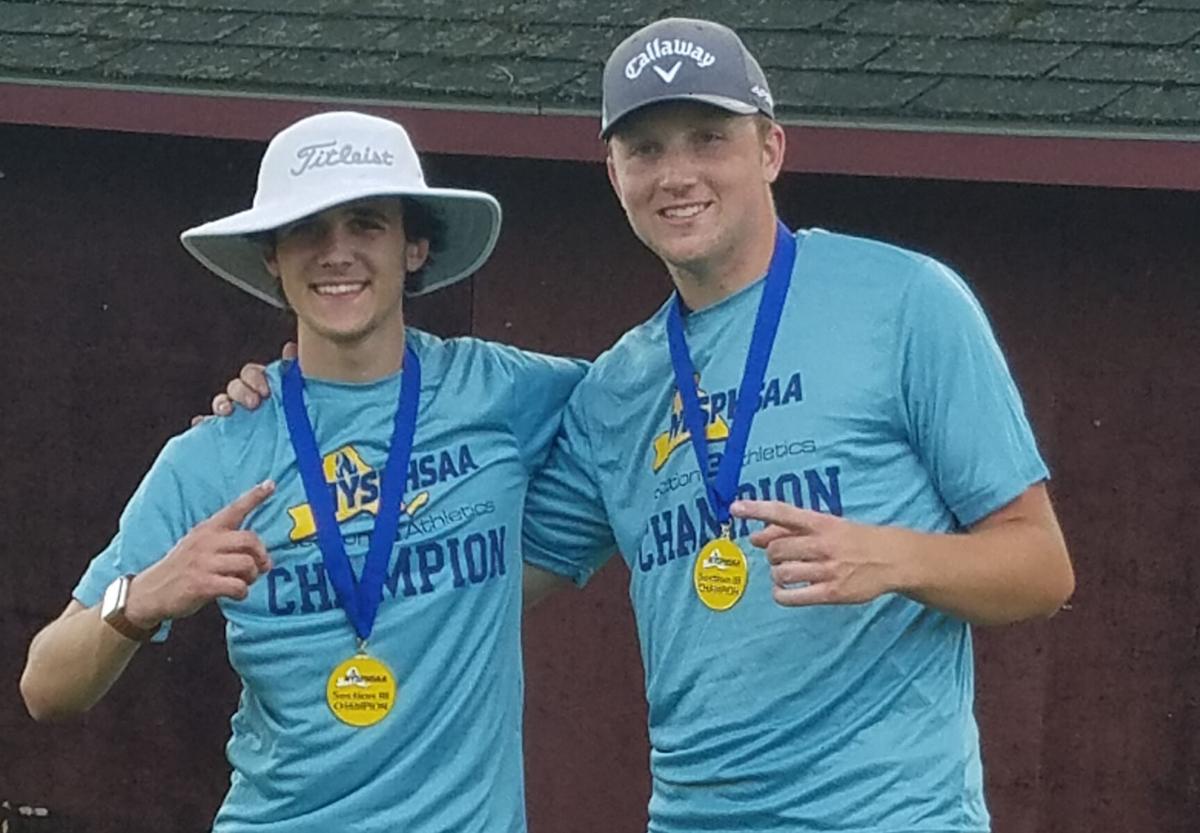 OSWEGO — From the bus ride to the end of a playoff hole to determine the individual medalist, Oswego High School varsity boys golf coach Dan Rose knew that his senior duo was locked in for a championship performance.

Seniors Ryan Bartlett and Mike Douglas each fired a 76 to share the top spot before falling to Westhill’s Anthony Maglisco in a one-hole playoff for top medalist honors, capping off their respective careers by pacing Oswego to the Section 3 Large School Division I golf title on June 7 at Seven Oaks Golf Course in Hamilton.

The Buccaneers prevailed despite a long layoff between their regular season in the fall and the sectional tournament to conclude the spring season — when most of their opponents compete — and each member of the top pairing were among several battling personal ailments throughout the 18-hole championship.

“It was a lot of fun doing it with your teammates, we stress team-first in our golf program, and it’s just good to do it with this group of guys that you play golf with all the time,” Douglas said.

“I just think this team was mentally very strong this year,” he added. “We have guys that really compete when it counts and that’s what you saw, we competed when it counted the most.”

Oswego finished 5-1 during its regular season that ended on Oct. 28. Golfers went their separate ways onto various teams since the season ended, many playing spring sports that overlapped with their personal preparation for the sectional golf outing.

Players practiced on their own time when able and often stopped to get some pointers from Rose during their solo rounds as he coached the varsity girls golf team this spring at the Oswego Country Club.

“What really gets tested is the mental game, that’s a big part of it,” Rose said. “You’re basically prepping for one day, one round, it’s a difficult challenge, but playing a few weeks before and at least getting your swing back into shape really helps. I think most of them tried to get out after their practices or other things they’re doing just to get a few rounds in before.”

Rose credited his top-performing senior pairing for setting the tone for the day. He noted that each took a lead role while the team reviewed the course and mapped out strategies hole by hole during the 80-mile bus trip, sharing their experiences as the only team members who had previously competed at Seven Oaks.

Bartlett and Douglas maintained their focus to help Oswego finish with a team score of 321 to narrowly edge out Jamesville-DeWitt (327) for the first sectional title of their respective careers.

“You could tell by the way they were talking about the course and talking to other players that they were ready to play and that they wanted this,” Rose said. “It was good to go through the holes on the bus, get mentally prepared and have a game plan, and then go out and try to execute, which they did almost perfectly.”

Working back into top physical form and mentally preparing for their return to a competitive atmosphere were only a few of the challenges Oswego needed to overcome.

Douglas was playing with a left-hand injury that caused frequent pain throughout his round and said he felt his driving distance was limited.

Neil Roman was suffering from motion sickness after the bus ride and started 4-over Par on his first two holes. Rose said that he was following Roman with a golf cart early and was ready to take him off the course, but the standout junior regrouped to finish with an 83 to help secure the team title.

Bartlett, meanwhile, was coming off a broken leg suffered during hockey season and was cleared just a week before the tournament was held. The senior said that he tried to do little things to get ready, such as putting and chipping around his house, while undergoing physical therapy in hopes of being cleared in time to compete.

“I really spent the last four months recovering and got cleared to play in the tournament a week before, so I really didn’t have any time to transition over to golf, it was more of a recovery,” Bartlett said. “But golf is more on the mental side, there is a huge mental side to the sport, and really to prepare yourself mentally for a tournament is way more difficult than the physical side.”

Bartlett and Douglas each ceded top medalist honors to Maglisco after the Westhill golfer captured the one-hole playoff.

The senior duo has helped promote the mix of interpersonal competition and unwavering support for teammates that has defined the unit, according to Rose, and they displayed that dynamic in a fitting end on the final hole of their respective high school careers.

“I had a great time in my last round ever playing high school golf, so it was great to go out with a win,” Bartlett said. “This was a great group of guys to play golf with and to be able to win our first sectional title together felt amazing, just to do it with that group of guys felt great.”