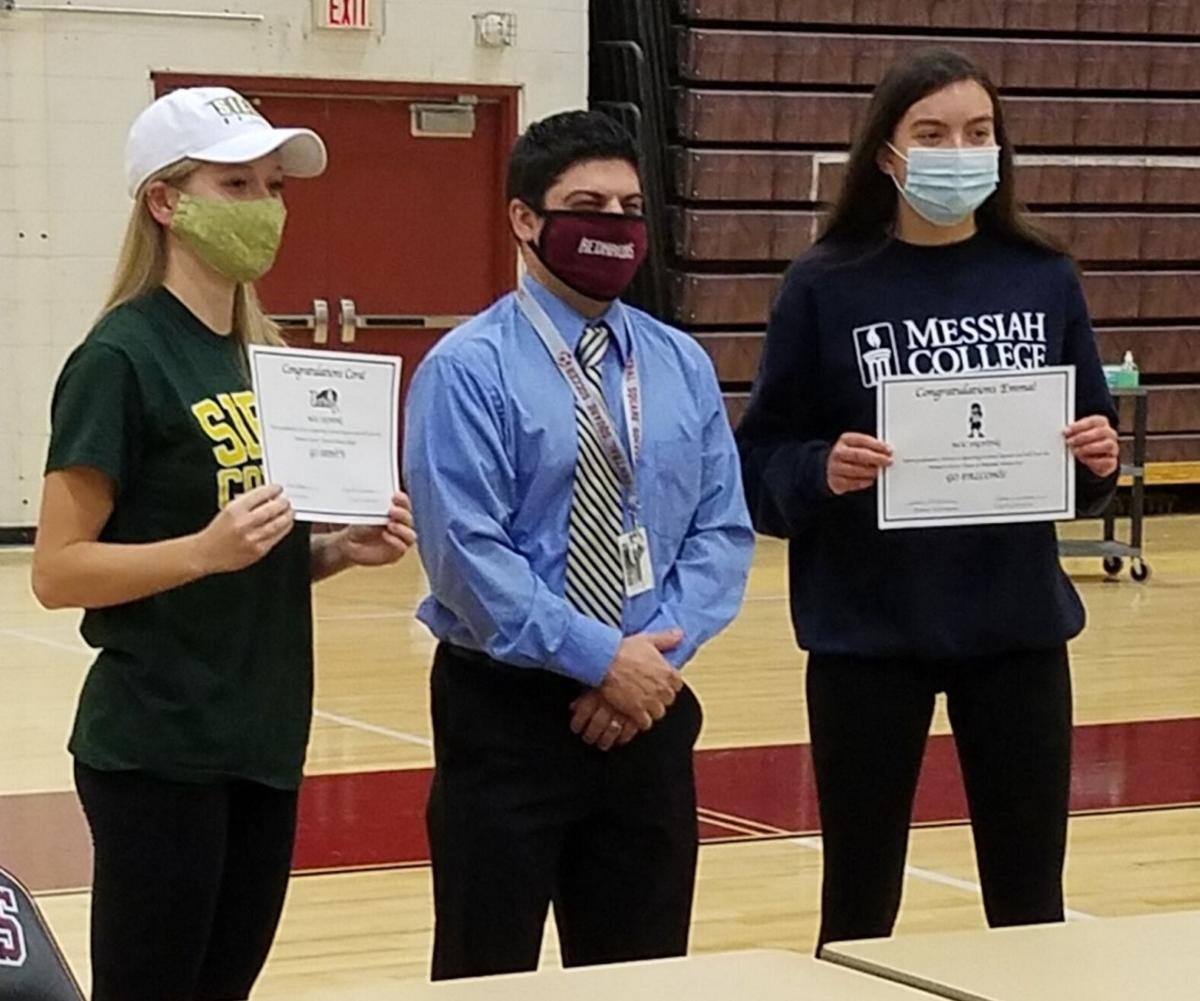 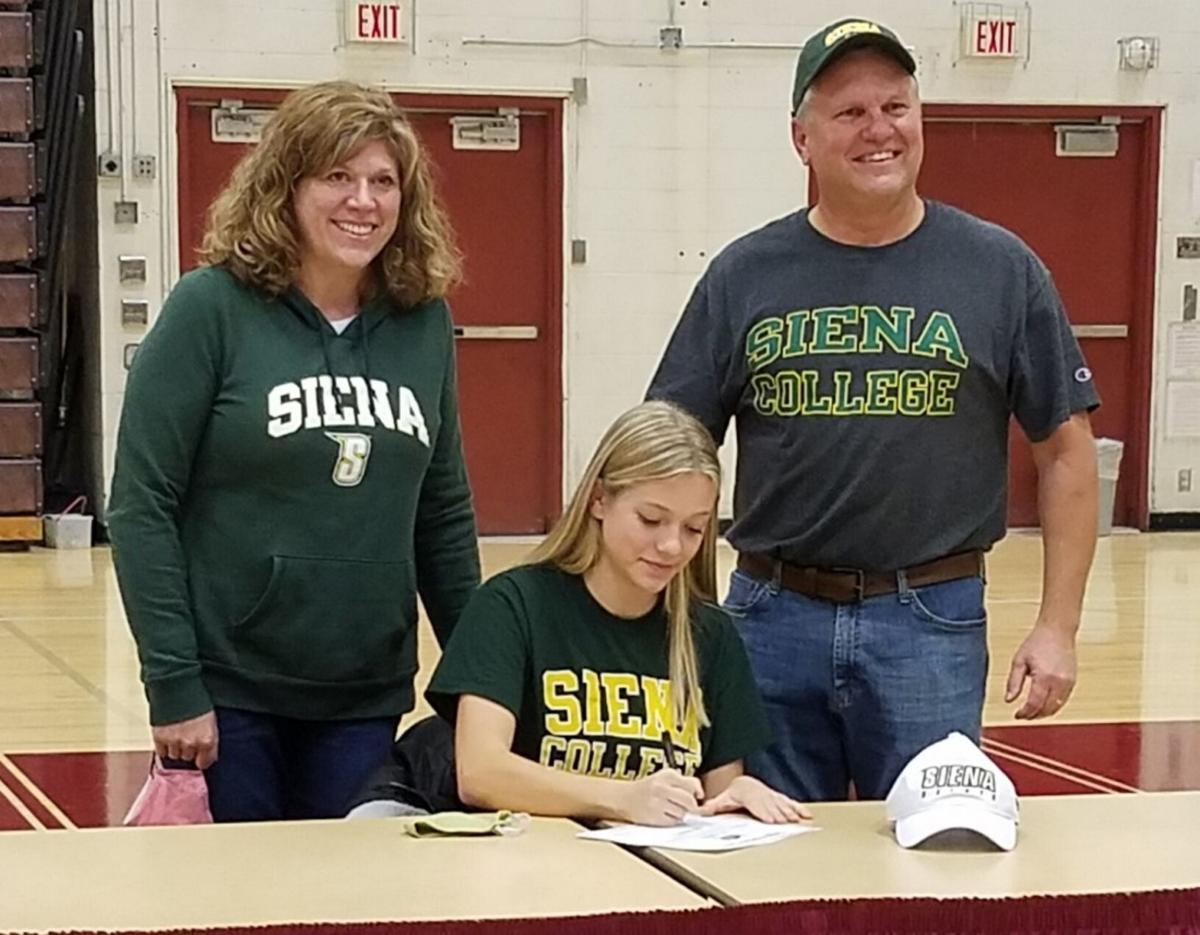 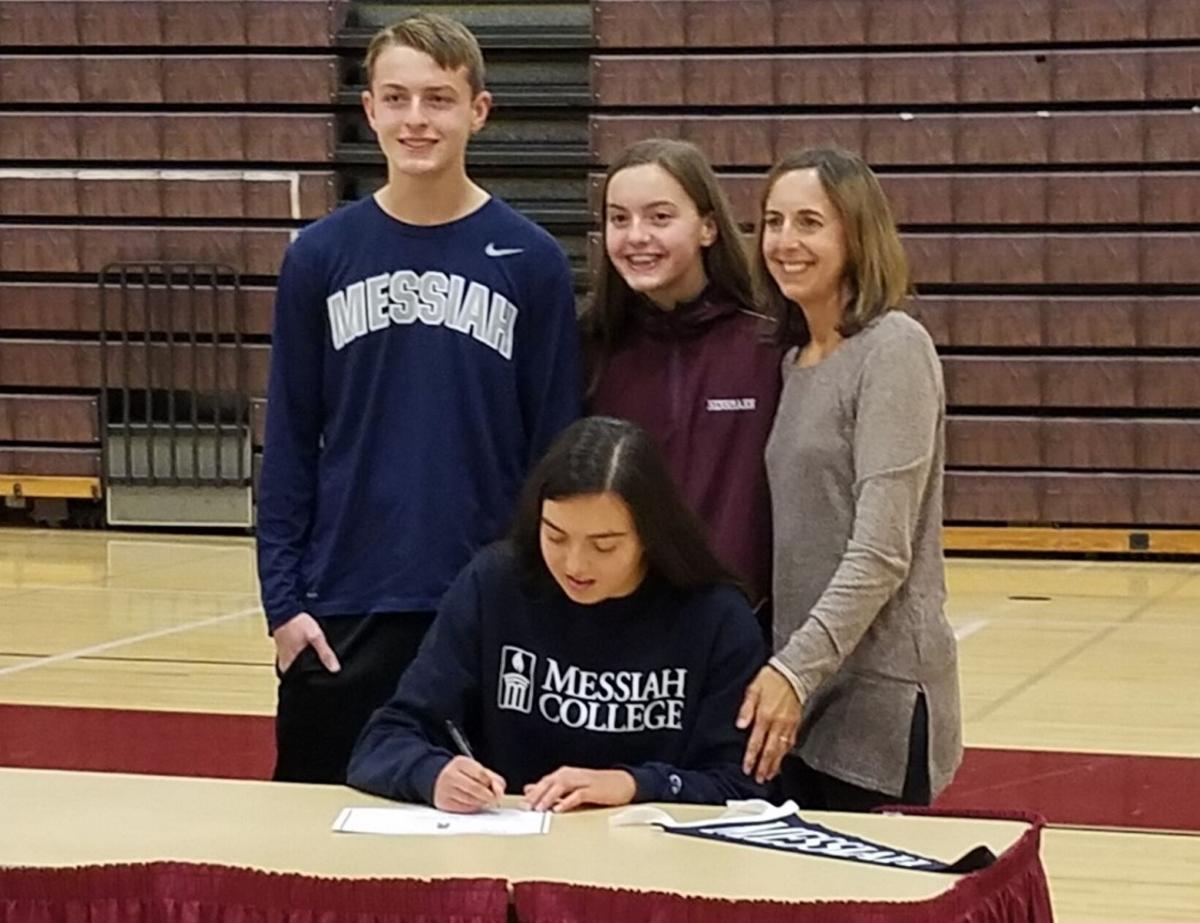 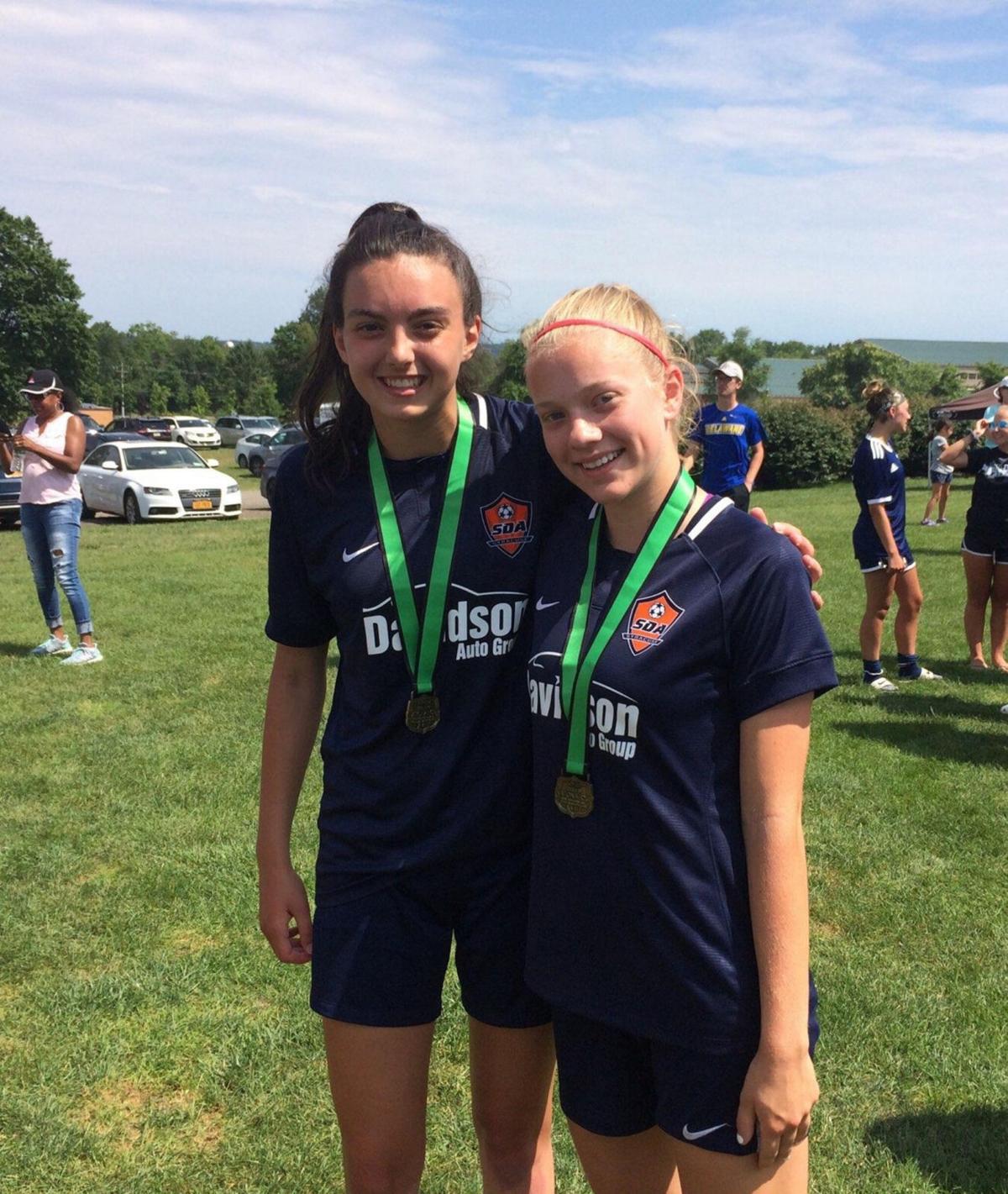 CENTRAL SQUARE — For their final act together as soccer teammates, Emma Herrmann and Cora Keohane simultaneously signed their national letters of intent to play the sport in college on Nov. 18 at the Paul V. Moore High School gym.

The Central Square senior standouts of the past three seasons, whose connection started years earlier as club soccer teammates in middle school, each made their college commitments official in a socially-distanced signing ceremony with members of their respective families and Redhawks coach, Angelo Carroccio, on hand to witness.

Keohane signed to play for Division I Siena College while Herrmann will play for Division III power, Messiah College, which won the 2019 national championship. The duo recently completed their last season together on the field, helping Central Square to a 7-4-2 overall record in a condensed campaign due to COVID-19.

“We’re just thankful to have the opportunity to actually come in school and sign,” Herrmann said. “Cora and I have basically grown up together playing soccer since sixth grade, so just being able to do it together in front of family, with a close friend and a great coach, it’s just special.”

Each player sat spaced apart behind a table at center-court with family members standing with them as they put pen to paper and signed to play for their respective colleges next fall. Herrmann and Keohane then briefly posed for photos.

“It was great just coming back into the school and signing in front of family, and Emma has been a really good friend to me,” Keohane said. “We always pushed each other to do our best, during the high school season we’ve always been there for each other and we kind of grew up together playing soccer, so to be able to do this together is really special.”

Herrmann verbally committed to Messiah this past February while Keohane made her decision to join Siena in May. Each player was able to tour the campus and stay for an overnight visit with their respective teams prior to the onset of the coronavirus pandemic.

Messiah College in Mechanicsburg, Penn., is a member of the Middle Atlantic Conference and finished with a 22-1-3 record to win the NCAA Division III title in 2019 while its fall 2020 season was canceled. The Falcons, who are coached by Scott Frey, have won six national championships and reached the Final Four 13 times since 2002.

Siena in Loudonville is coming off a 4-11-4 season in 2019, also having its fall 2020 season canceled due to COVID-19. Keohane is the first member of the incoming recruiting class to sign for coach Steve Karbowski, according to the team website. The Saints compete in the NCAA Division I Metro Atlantic Athletic Conference.

Herrmann and Keohane are eager to fulfill their collegiate dreams but were equally grateful for the chance to close their Central Square careers on the field together this past fall while nearly half of Section 3 school districts opted to postpone their soccer seasons.

Herrmann was voted as the Salt City Athletic Conference Empire Division Player of the Year by league coaches while she and Keohane were each selected to the all-league first team. Herrmann finished with 20 goals and 10 assists while Keohane recorded 10 goals and 13 assists, combining for 75% of the Redhawks’ scoring production.

“Being able to play when so many other seniors haven’t been able to have a season, it just means that much more,” Herrmann said. “Every day, we kind of treated it like our last, being seniors and with COVID, so just being able to be with close friends and teammates, and on a team where we enjoy playing with each other, it was a special season.”

Keohane added: “We kind of just went out there every day to have fun and practice hard, and we tried to make every day count, train our hardest, because we never knew if the season would end because of COVID or what would happen with it.”

The Redhawks posted a combined record of 35-11-3 over their three seasons with Keohane and Herrmann in the lineup together after the latter transferred into the district from Carthage.

That includes two of the most successful campaigns in the 49-year history of the program. Last fall, Central Square finished 16-2-1 and reached its first Section 3 championship game while establishing a new program record for victories. Both players garnered Class A all-state honors in 2019.

The previous season in 2018, Herrmann and Keohane helped lead the Redhawks to a 12-5 mark for its best record in a decade up to that point. The duo first met while playing club soccer and bonded over their shared passion for the sport and desire to play in college.

They each gained valuable offseason experience and collegiate exposure in recent years as members of the Syracuse Development Academy travel team.

“This is kind of like the cherry on top,” Herrmann said of the combined college signing. “We’ve grown up and pushed each other, we’ve put in so many hours into getting better. Senior season wasn’t what we expected but I think every day we were still out there trying to push each other, so being able to share this experience together was special.”