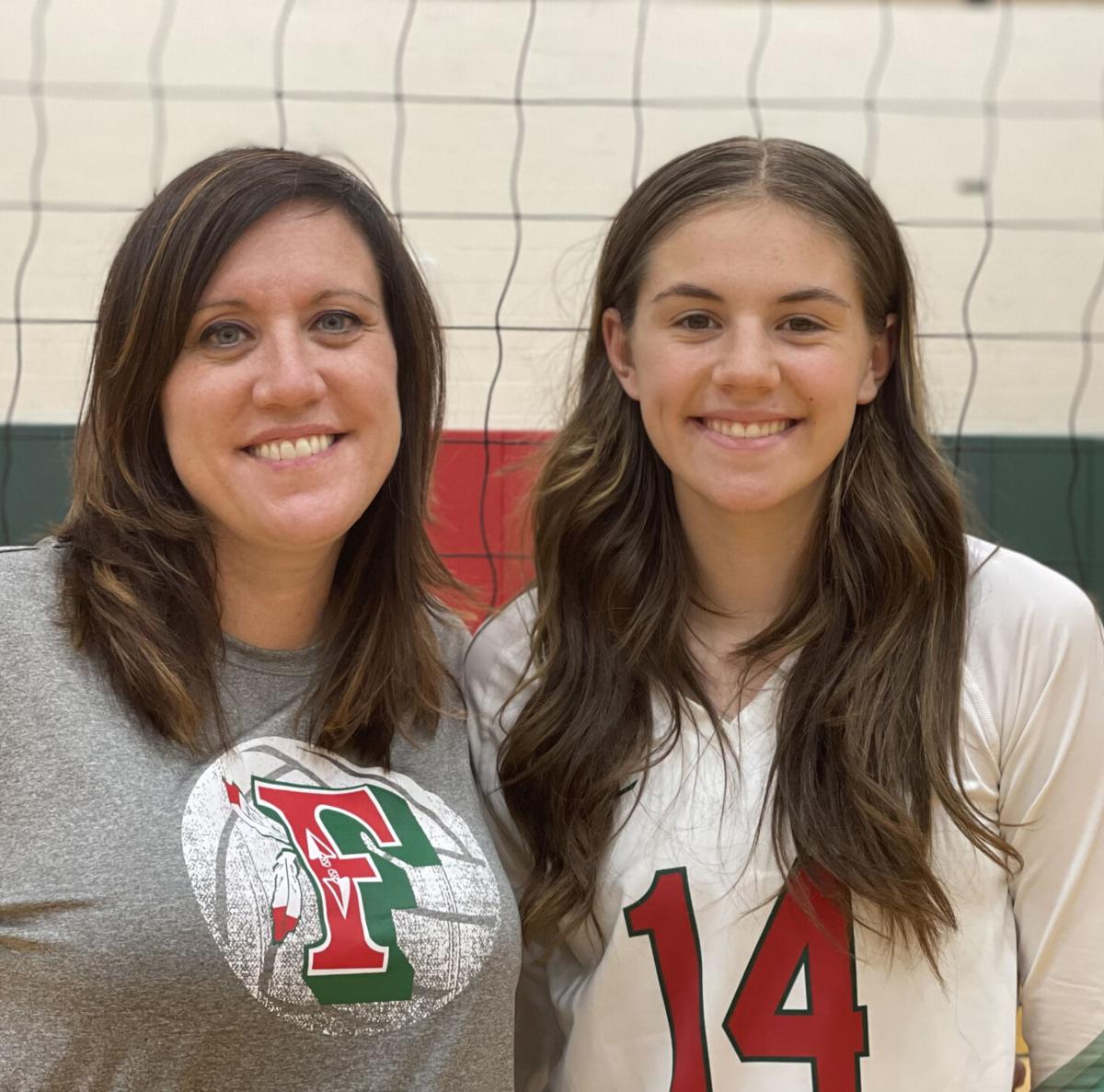 Fulton-G. Ray Bodley High School varisty volleyball coach Jessica Frost, left, and her daughter Natalie, right, prior to a recent match in Fulton. Natalie Frost is a sophomore and the returning SCAC Empire Player of the Year. Provided photo. 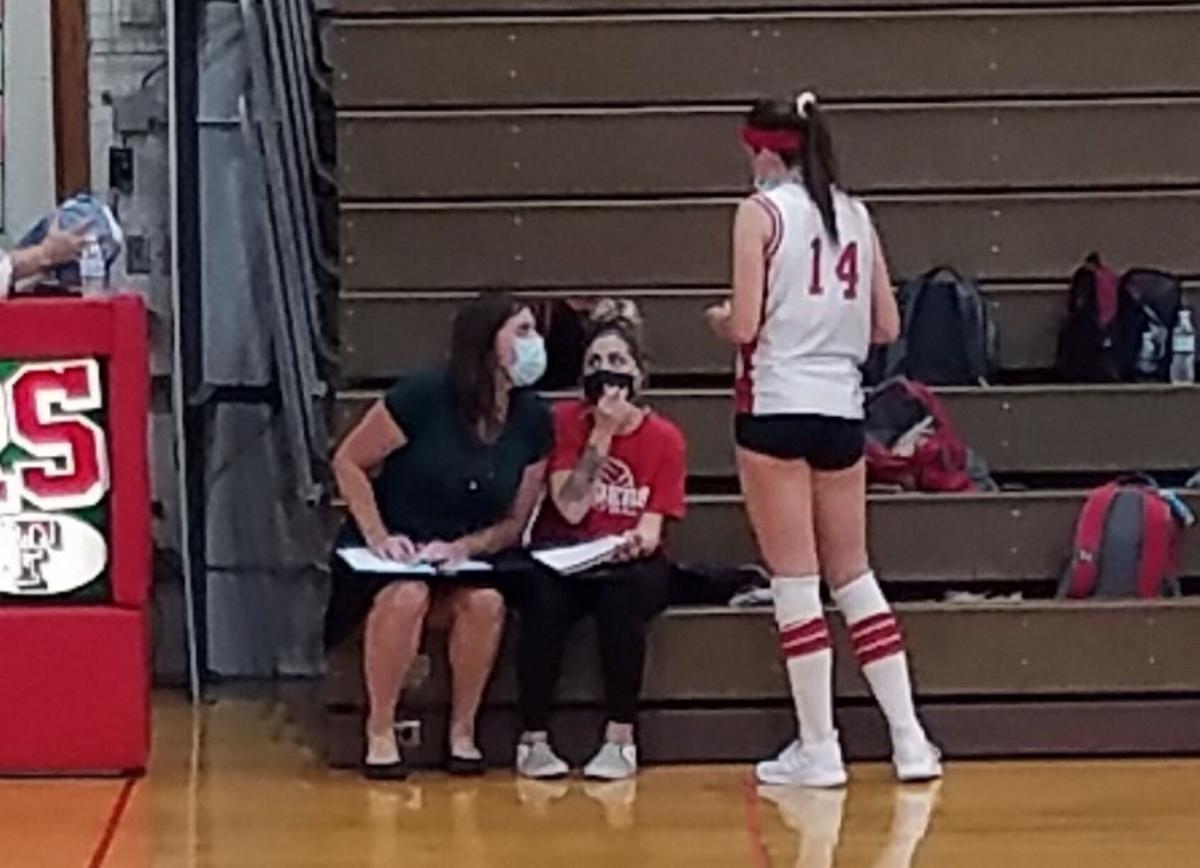 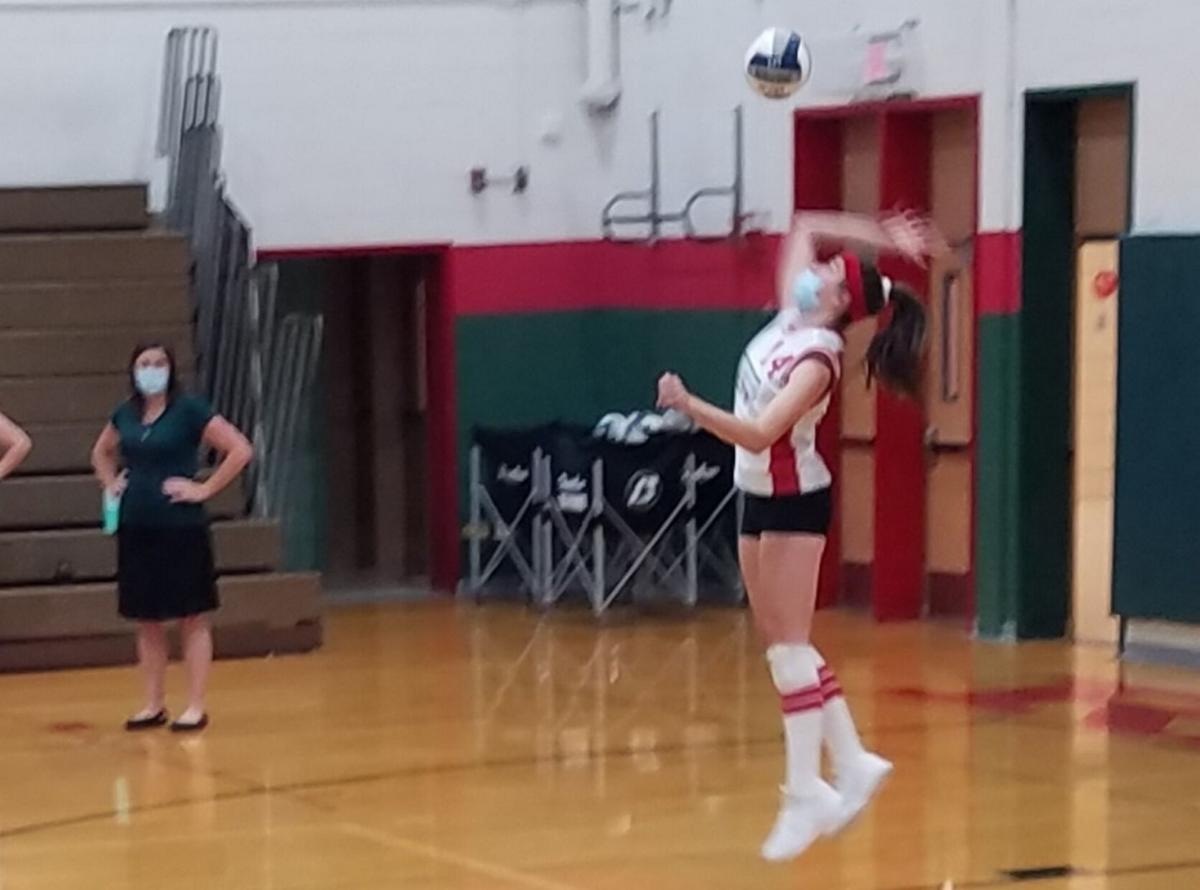 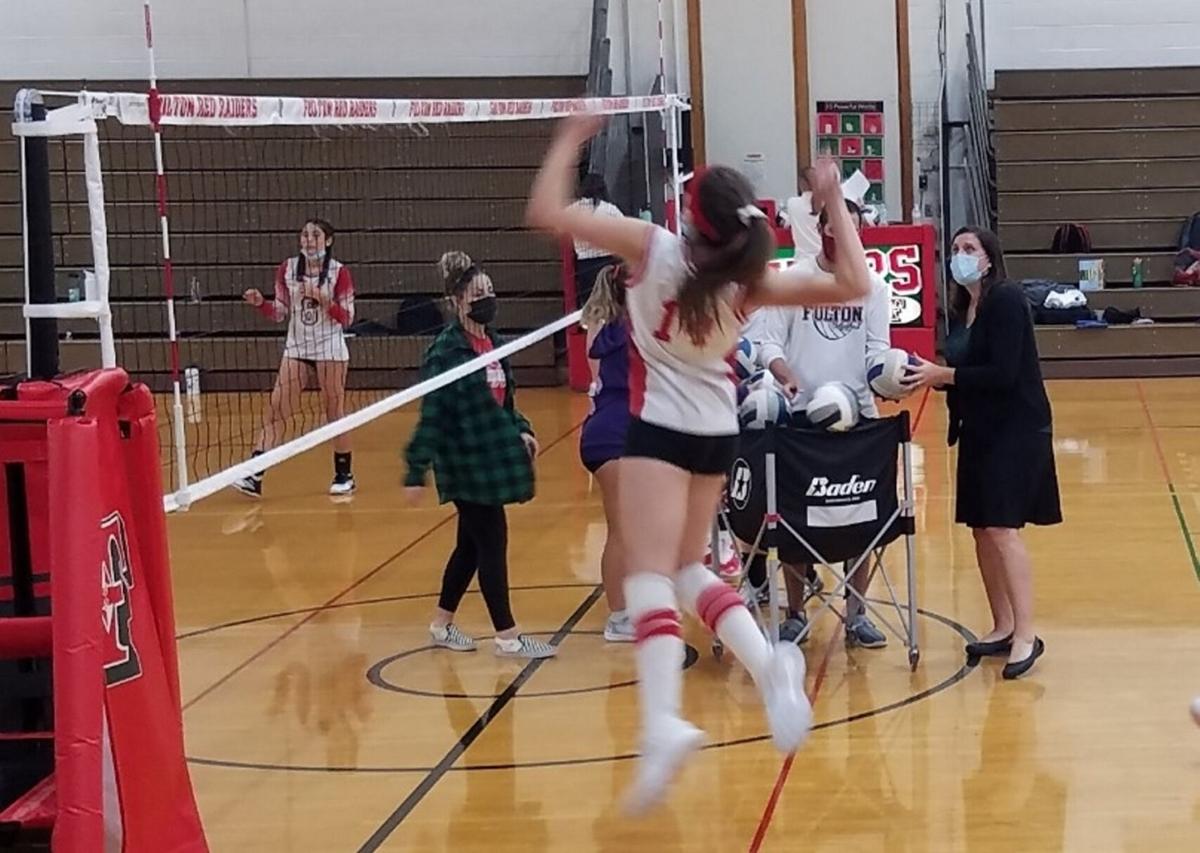 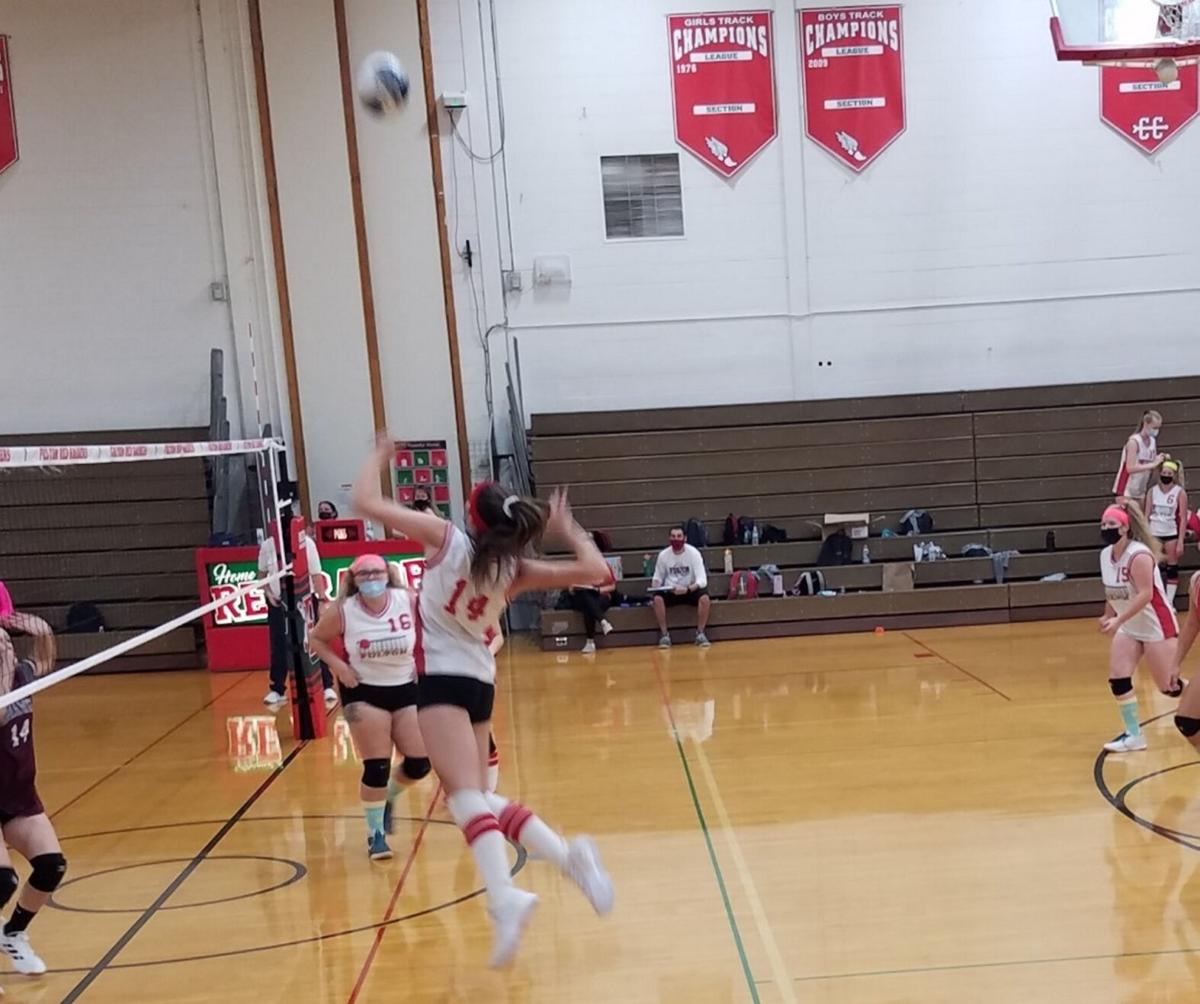 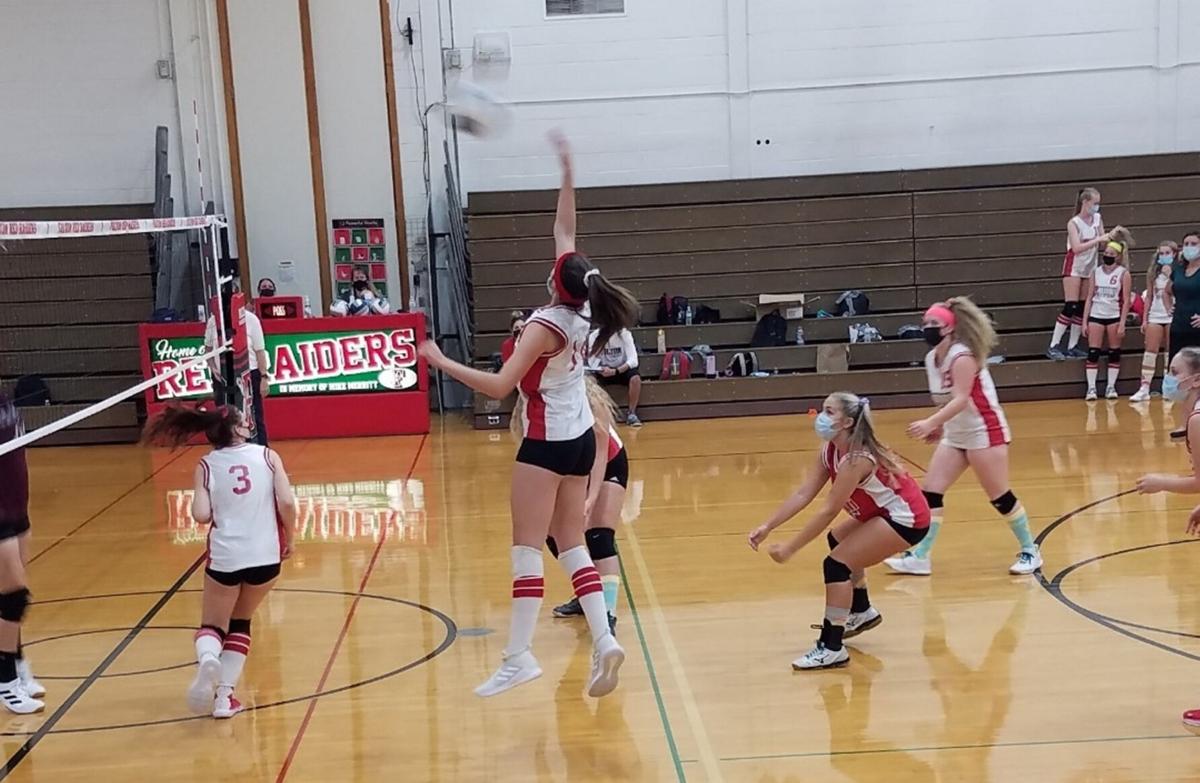 Fulton-G. Ray Bodley High School varisty volleyball coach Jessica Frost, left, and her daughter Natalie, right, prior to a recent match in Fulton. Natalie Frost is a sophomore and the returning SCAC Empire Player of the Year. Provided photo.

Fulton sophomore outside hitter Natalie Frost entered the week ranked among the top five in all of Section 3 for total kills this season, working with her mom and Red Raiders head coach, Jessica Frost, to push the squad to a 6-1 record and a perfect 5-0 mark in the Salt City Athletic Conference Empire Division.

The mother-daughter tandem helped the Red Raiders post a 10-2 overall record in the Fall II season last spring, in which Natalie Frost was named SCAC Empire Player of the Year in her debut varsity campaign.

Jessica Frost had previously coached her daughter Natalie on various youth and club teams throughout her childhood.

“She’s always there,” Natalie Frost said of her mom’s presence as coach. “Every celebration, every tear-up moment, she’s always been there and I’m so grateful for her.”

She added: “We have a very strong relationship, and it doesn’t affect us (negatively) at all. If we ever sort of butt heads, I know I can always talk to an assistant coach, but she’s always there and has always been supportive, and I love her very much.”

Jessica (Walker) Frost is a 1995 Fulton graduate in her sixth season as Red Raiders varsity coach. She was a decorated volleyball player at NCAA Division III Cortland State University as one of just two college players in the state to garner First Team All-American honors on three occasions.

Frost led the Red Dragons to four NCAA Tournament trips and three national quarterfinal appearances, graduating as the program leader in career kills (1,739). She was inducted into the SUNY Cortland C-Club Hall of Fame in 2016 and was also enshrined in the inaugural Fulton Booster Club Hall of Fame.

Jessica Frost has enjoyed passing her love and knowledge for the sport onto Natalie, who displayed a strong interest in the game at a young age and played for her first club travel team at age eight.

“I love her being able to have the experience of playing on a club team, travelling, playing really good teams in different states and getting that exposure,” Jessica Frost said. “I just want her to enjoy the sport, and I want to give back to the sport, and I love that she is playing something that she loves and is having volleyball bring her different places.”

Natalie Frost recently wrapped up her seventh season with Syracuse-based Club SyrV, playing on the 16-and-under team that reached the USA Volleyball Girls Junior National Championships this past summer in Las Vegas, Nevada.

She has also played for club teams in her other two varsity sports, basketball and softball, but described volleyball as her favorite and the sport she hopes to play in college. Natalie will play for a new club team in December — VolleyFX in Rochester — without the presence of her mom on the sideline in a coaching capacity.

“She has been my coach for many years, and she’s taught me so much, not only as a mom but as my coach,” Natalie Frost said. “But I’ll be playing for a different club team with different coaches after this (varsity) season, so it will be good for me to have to adapt to that and get some advice from some other coaches.”

The Red Raiders were determined to carry their success over from the Fall II campaign last spring after losing six seniors to graduation and produced a strong summer of preseason work.

Fulton lost its season opener to Liverpool but has since won six in a row and swept 18 straight sets during the win streak. The program is aiming for its first league title since 2009 and first Section 3 championship since 2011.

“It’s a lot of training and hard work but if we all keep putting in the effort, I think we can be really good,” Natalie Frost said. “We’re (6-1) at this point and if we keep doing those things, I think we can keep winning. We have a lot of goals for this season.”