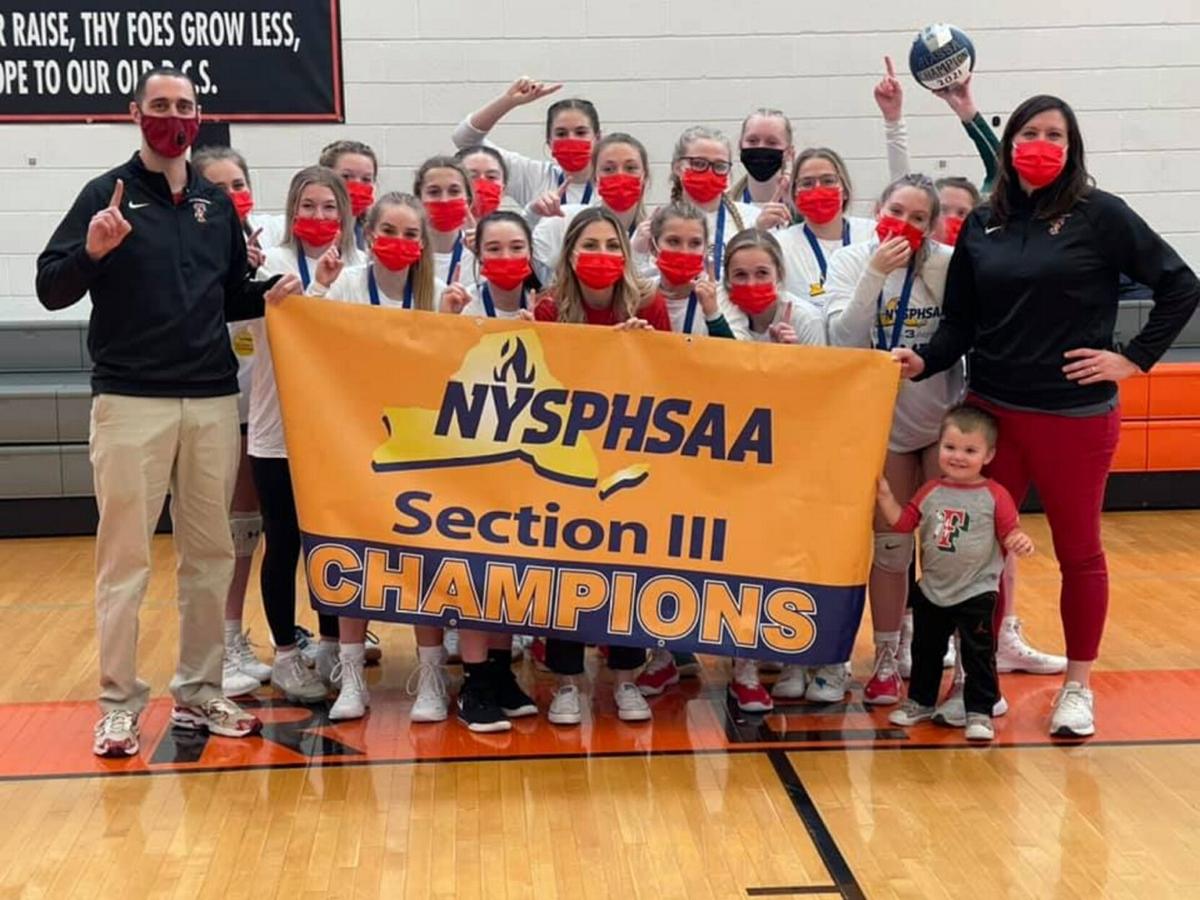 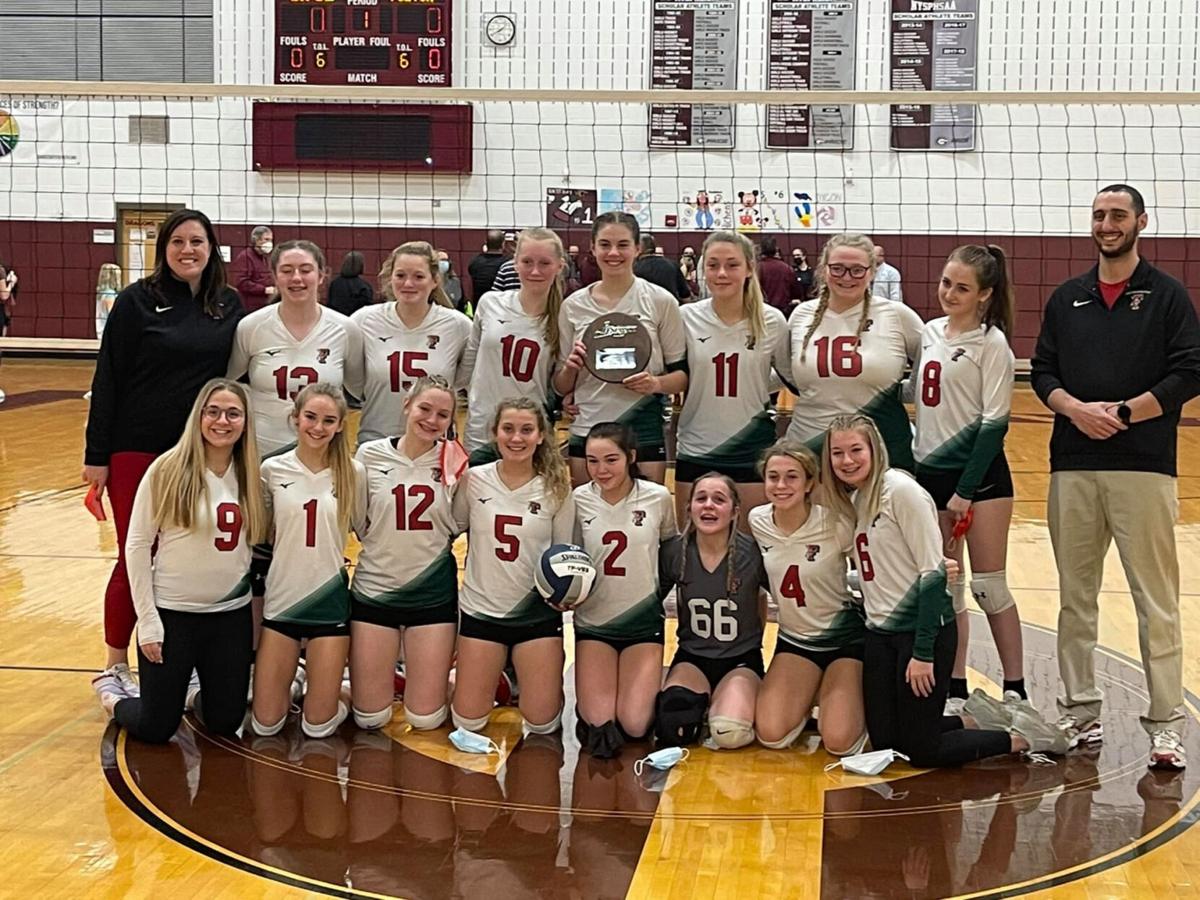 FULTON — The Fulton High School varsity girls volleyball team gave itself plenty of reasons to be grateful at the Thanksgiving dinner table this week.

The Red Raiders recently wrapped up a prolific season by capturing the Section 3 Class A championship and claiming a state regional victory before falling to eventual state champion and Section 2 power, Burnt Hills-Ballston Lake, in a state playoff quarterfinal on Nov. 12 at Gloversville High School.

The Red Raiders captured their first sectional title in head coach Jessica Frost’s tenure and claimed the title for the first time since 2011 overall by sweeping rival Jamesville-DeWitt, 3-0, on Nov. 6 at Phoenix Middle School.

“I knew that we could do it and we all had confidence in each other and having that feeling and winning and going as far as we did was just an amazing experience,” said junior outside hitter, Addison Pickard. “It definitely left tears in my eyes, and I would do anything to go back to that day.”

Fulton players stormed the court to celebrate the team’s first sectional championship in a decade after completing the shutout of Jamesville-DeWitt — 25-19, 25-17, 25-17 — and were joined by some team supporters from the bleachers taking in the moment.

Emotions were high after putting the finishing touches on their 17th straight victory in front of a packed gym.

Fulton earned the top seed for the Section 3 Class A bracket and finished 18-2 overall after producing a 10-2 record in the Fall II campaign held last spring, which was delayed from the fall due to COVID-19 concerns with no sectional tournament conducted.

“Winning sectionals is probably every senior’s dream, especially if they have never won one, so I think that really meant a lot to a lot of the seniors, it being our final year and getting something really memorable,” senior Lydia Gigliotti said. “Obviously last year with COVID was memorable, but this one was a good memory.”

The Red Raiders completed a three-match season sweep of the Red Rams after losing their only matchup last year, and both clashes the prior season.

Sophomore outside hitter Natalie Frost led the way with 15 kills while junior setter Sydney Sachel added 21 assists and eight digs. They each credited a positive mindset and confidence from their regular-season sweep as factors for the decisive victory for the sectional crown.

“Right when we got there, we were blaring music, having fun, we acted like we already ruled the gym,” Natalie Frost said. “I feel like that positivity and working out as a team getting ready for it helped with our confidence. Throughout the game, we stayed calm, we stayed positive and worked together to come out on top.”

Sachel added: “It was crazy, there was just such good energy always. There was never a point where we were down, we just kept each other up and it was an incredible experience.”

Fulton advanced to take a 3-0 win over Massena on Nov. 10 in Ogdensburg in a state regional playoff game before ending its season in the next round.

The Red Raiders rode an 18-match winning streak — bookending its season with an opening setback against Liverpool and final loss to Burnt Hills-Ballston Lake — and dropped just six sets all year prior to taking a 3-0 loss in their last outing. They shut out 15 foes and their cumulative set scores bested opponents, 54-9, over the full season.

“I think their fighting attitude and never giving up, and as the season went on, I think they got more confident in themselves and with each other on the court,” head coach Jessica Frost said. “It’s amazing how much they grew in a short amount of time.”

Players expressed gratitude for the large crowds that followed them throughout their postseason run, traveling long distances to offer support in the latter stages.

They were also thankful for the additional time spent building their team bond through a variety of off-court activities that were restricted due to COVID-19 concerns last year and left a void for players.

“I’m very proud of everybody and I’m going to miss the girls a lot, we spent a lot of time together with the extended season and even before the season,” senior libero Joann LeVea said.

“Our bus rides, we play music and we’re always loud, and going out to eat,” she added. “Especially toward the end of the season, we did more together, we slowly came together and really became a team.”