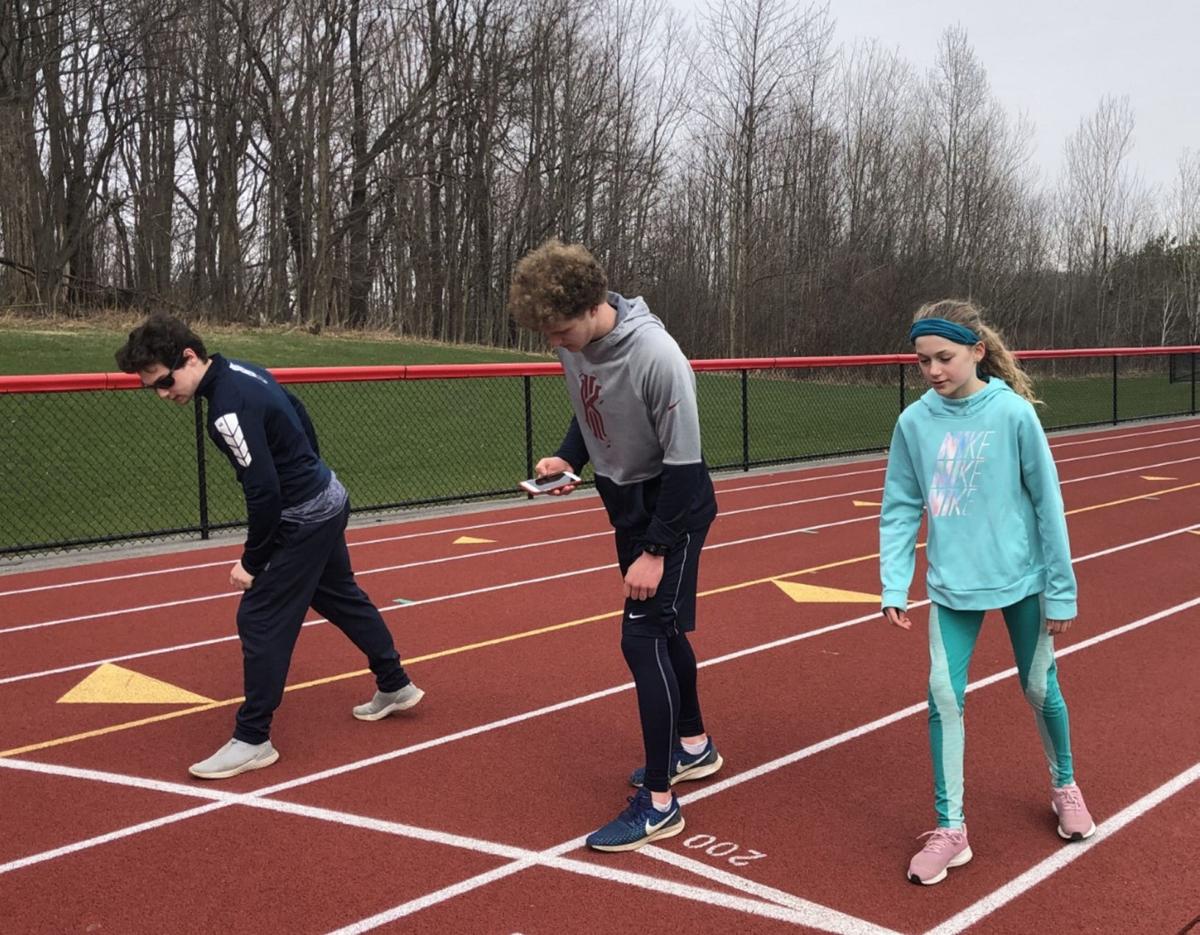 The Carguello siblings from left, Ben, Josh and Grace, line up at the Pulaski High School track recently, one of their frequent family activities during COVID-19 shutdowns. Provided by Wendy Carguello. 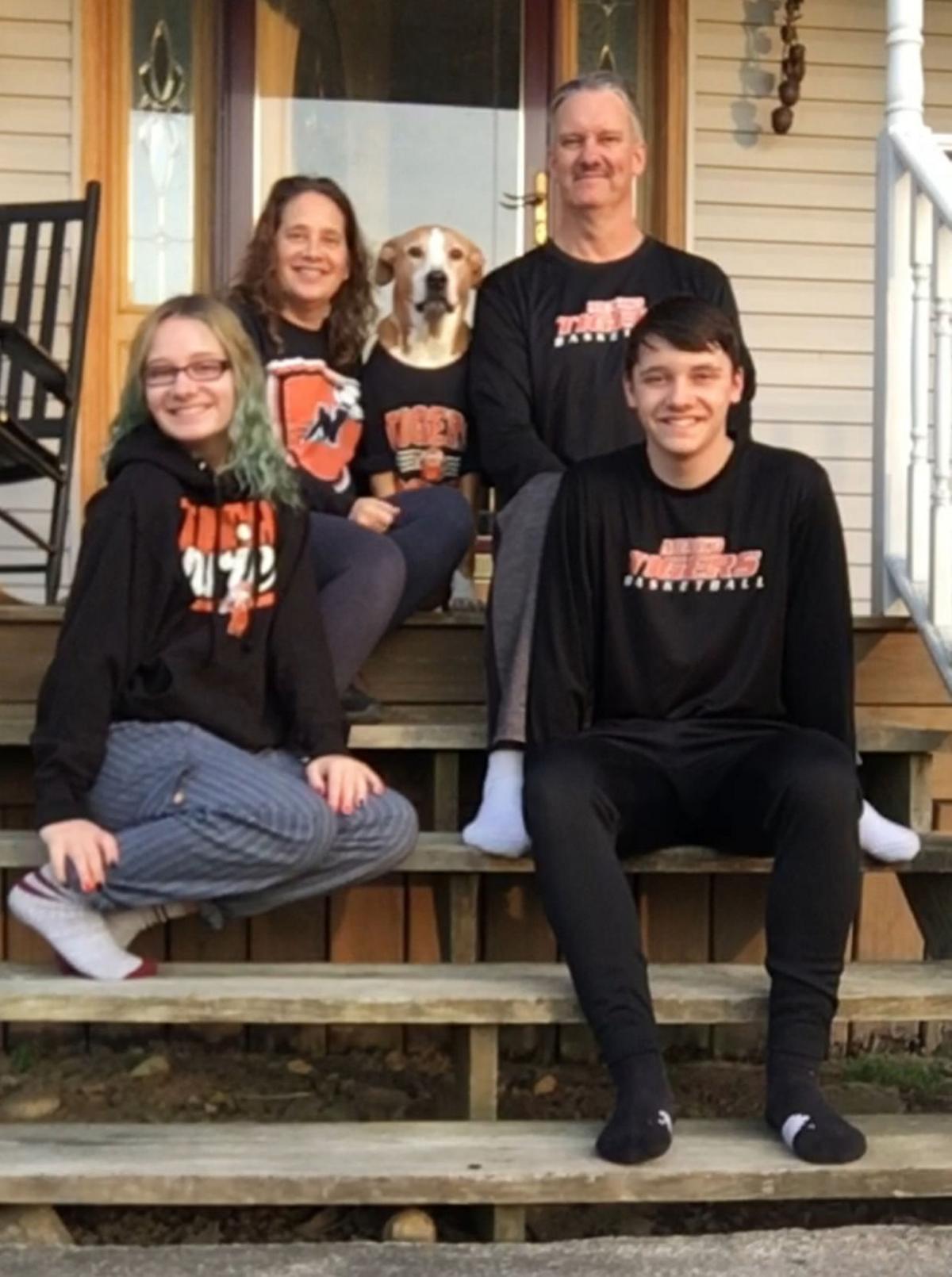 The Hyde family from left, Emma, Laura, Eric Sr., and Eric Jr., pose in Mexico athletics gear outside their home. The group has been working out together and staying active amid COVID-19 shutdowns. Provided by Laura Hyde. 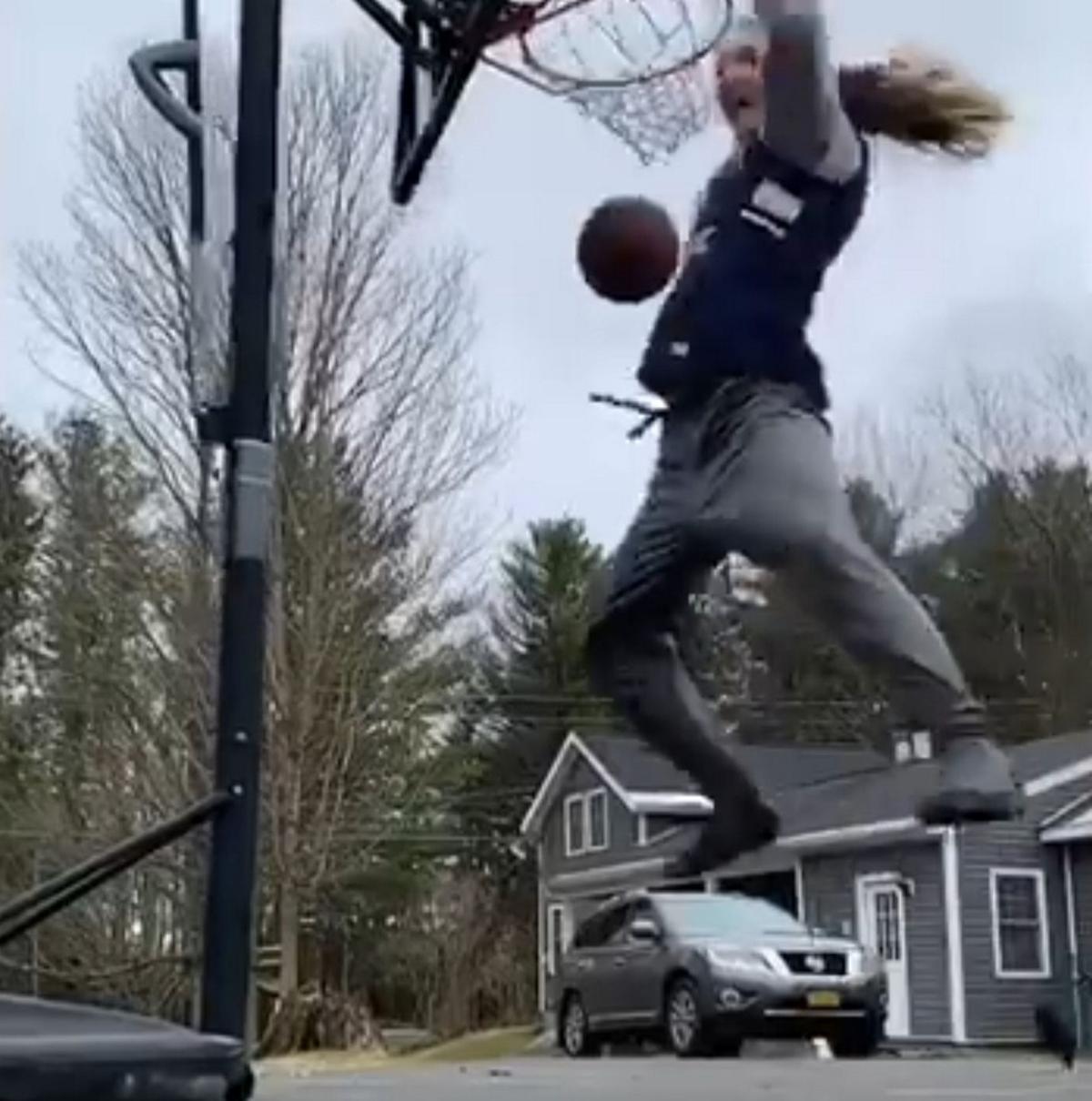 Screengrab of Central Square junior Julia Mann dunking on a lowered rim in her driveway during a recent mock ESPN SportsCenter Top 10 video. 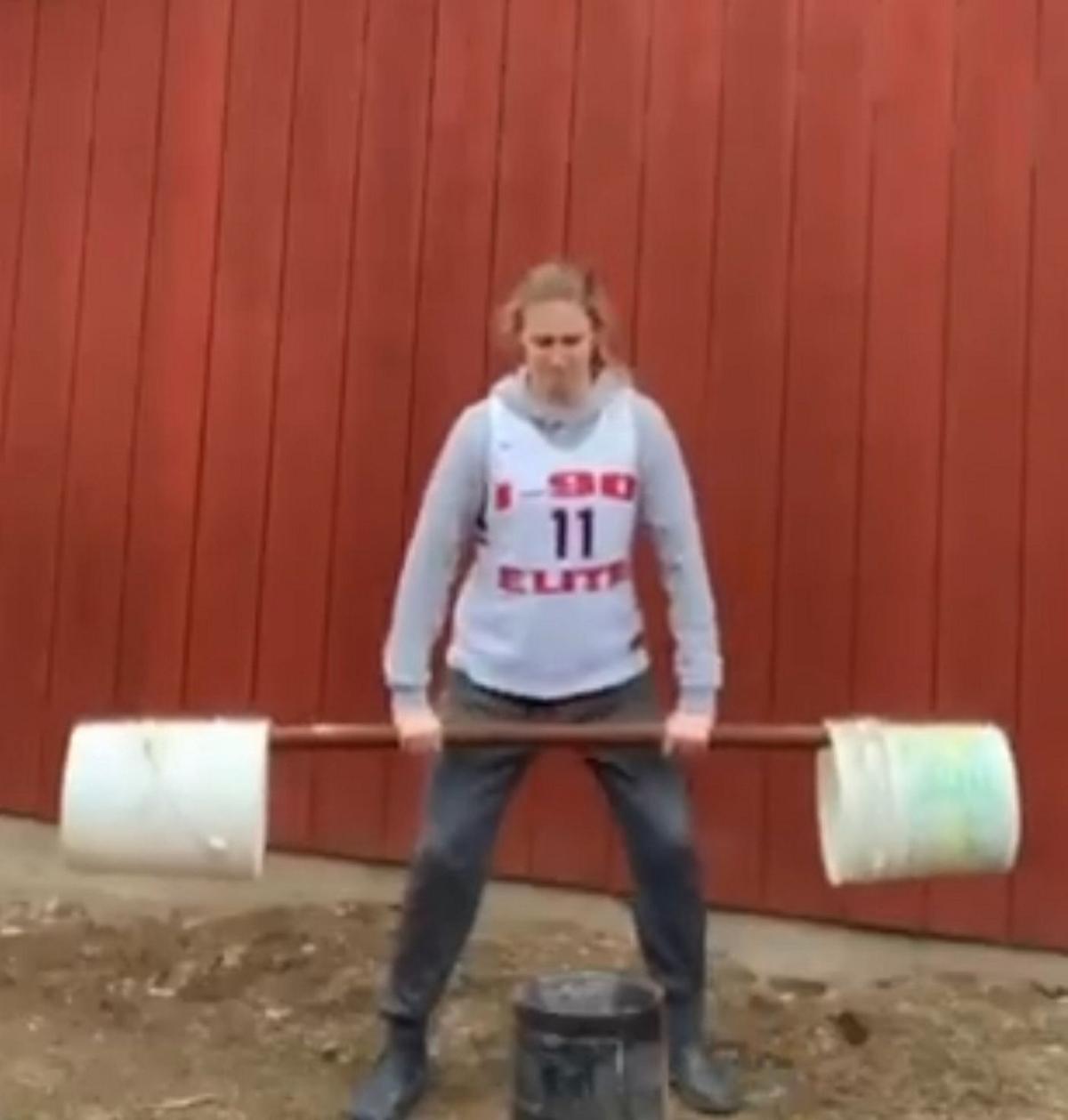 The Carguello siblings from left, Ben, Josh and Grace, line up at the Pulaski High School track recently, one of their frequent family activities during COVID-19 shutdowns. Provided by Wendy Carguello.

The Hyde family from left, Emma, Laura, Eric Sr., and Eric Jr., pose in Mexico athletics gear outside their home. The group has been working out together and staying active amid COVID-19 shutdowns. Provided by Laura Hyde.

Screengrab of Central Square junior Julia Mann dunking on a lowered rim in her driveway during a recent mock ESPN SportsCenter Top 10 video.

OSWEGO — The now-familiar sound of the postal delivery truck pulling up each day has become the alarm for Paul V. Moore High School junior Julia Mann to start her daily workouts.

The three-sport standout and college basketball hopeful walks to get the mail and stops at a tree in front of her family’s Central Square home to do pull-ups on a branch to kickstart her training routine — joining the legions of Oswego County athletes and families that are discovering innovative ways to remain active and continue progress toward their athletic goals during COVID-19 shutdowns.

Schools throughout the state were closed in mid-March to limit spread of the virus and remain vacated until at least May 15, putting a pause to area sports and other traditional group exercise outlets and forcing active area families and athletes to get creative with their workout routines.

“It’s been crazy because I’ve never had just nothing to do ever before, so I really just had to get used to it but now I’ve been making the most of this time with school and sports, just doing whatever I can,” Mann said.

The absence of athletic teams and practices hasn’t eliminated the need for a healthy activity or competitive outlet, and within many districts, siblings and parents have been standing in for teammates or foes.

Twin siblings Eric Jr. and Emma Hyde — juniors at Mexico Academy and Central Schools — have been playing basketball against each other and their parents, Eric Sr. and Laura Hyde, after their father returns home from his work as a security guard.

Eric Jr. plays soccer, basketball, and tennis for the Tigers while Emma competes in cross country and competitive dance. Eric Sr. plays basketball in a men’s league based in Fulton and is also missing the regular action.

“It is fun when we can try to compete with them, because yeah, they can beat us, but I think we do surprise them,” Laura Hyde said. “They call us old all the time, but I think we do surprise them how we can push against them and score some baskets, and play defense with some help from the dog tripping Eric Jr. up when he tries to dribble, so that might help make his skills a little better, too.”

The family has also endured online workout videos conducted by Mexico swim coach Shawn Parkhurst and started implementing yoga during their quarantine. Eric Sr. and Laura Hyde had each started a weight-loss program prior to recent COVID-19 restrictions and respectively have lost 17 and 16 pounds since mid-March shutdowns, crediting the online workouts for helping them maintain their edge.

The Carguello family from Pulaski, meanwhile, has spent much of its time together at the high school track when the venue is empty and available, usually about four days per week.

Dr. Patrick Carguello, the medical director at Pulaski Health Center, and his wife, Wendy, the physical therapist at Pulaski Elementary School, have an active family full of avid runners. The Carguellos and other extended family members have biked more than 1,000 miles together in various cycling events to raise money for diabetes research.

“We all miss our teammates and running friends, so being able to at least run together and for them to have their siblings to run with has been nice,” Wendy Carguello said.

Mann, who is coming off a strong junior campaign for the Redhawks varsity girls basketball team and awaiting the potential start of track and field season, has focused mostly on school and training for the candidate fitness assessment for U.S. service academies and identified pullups as her biggest need for improvement.

Mann has talked to coaches for Air Force Academy and Navy regarding their women’s basketball teams but hasn’t made any decisions on her future. She plays AAU basketball for the I-90 Elite team based in Syracuse, which has already lost two key offseason tournaments due to fallout from the pandemic.

Mann has gone through daily basketball workouts provided by her AAU coaches while running, biking, and other innovations, such as the daily pullups on the tree out front when she gets the mail.

Mann also found a way to experience the fun of sports during the downtime by creating a mock “SportsCenter Top 10,” video last month that garnered attention on the district’s social media accounts and TV news in Syracuse.

She received help from her sister and incorporated basketball trick shots, dunks, and funny clips from a variety of sports using items around her family farm — weightlifting with buckets, catching a football off a rope-swing, turning a cartwheel into a golf swing, rodeo with a goat, among other ESPN-worthy highlights.

“I had a lot of fun doing it, just doing whatever I can to keep myself busy, and it actually took a while, it was about three or four hours in total to put it all together,” Mann said.

“It ended up getting kind of big and a lot of people reached out to me and said it made them happy, so that was really great for me to be able to bring some joy to people during an uncertain time.”

Area athletes have also developed other skills during their recent time away from teams — painting and drawing, cooking, working with tools, helping around the house — but the period has also included some angst from all parties amid the extreme adjustment.

The Hyde twin siblings had to cancel their birthday plans and instead experienced a series of social-distance greetings, and while each expressed gratitude for virtual avenues for sports and dance, they are like the many athletes and students that miss the hands-on instruction and the presence of coaches, teammates, and classmates.

“It’s independent, individual instead of being with my teammates,” Emma Hyde said. “It’s very different because you’re used to your coaches or dance teachers being there with you making sure you’re doing things right, correcting me on stuff, so that’s been hard, but they have offered Facetime and zoom and those things, which has really helped.”

Eric Hyde Jr. added: “The soccer videos help, but it is harder, because when I’m in practice working on technique or fundamentals, I like to ask coaches and make sure I’m learning the best way to do a certain move. … It’s hard to improve as much as I want to without that intensity of those teammates or the guys I would go up against.”

Pulaski junior Josh Carguello expressed a similar sentiment and is like the countless area high school spring athletes getting more anxious about the potential for a season as each day passes.

“I would say it’s been very inconsistent,” Josh Carguello said. “I’m somebody that relies a lot on school and sports for structure, and for a lot of kids my age, everything has been kind of thrown off.”

He added: “I’ve been running a lot and shooting hoops on my own, but without any of teammates around, the motivation and the feeling just isn’t really the same.”