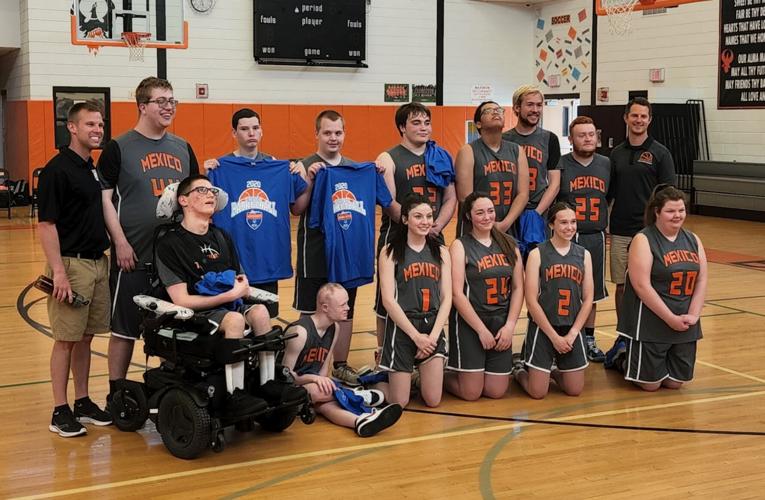 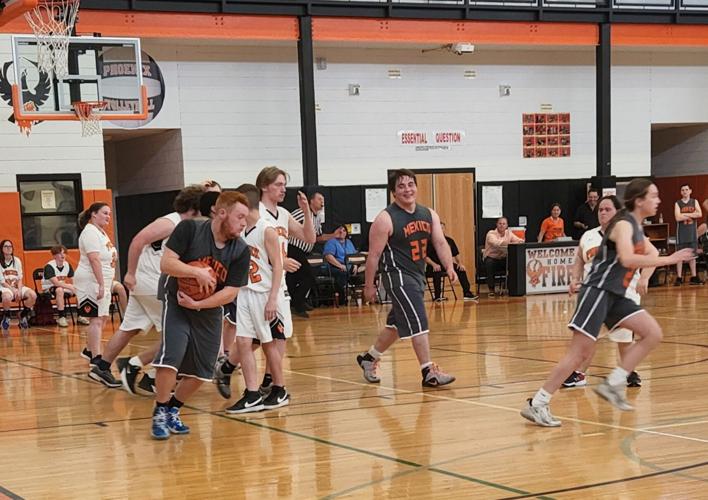 Mexico’s Jeremy Emery, left, secures a rebound to help the Tigers hold on for the win over the Phoenix Firebirds in the unified basketball championship game May 24 at Phoenix Middle School. Josh St. Croix/Johnson Newspapers. 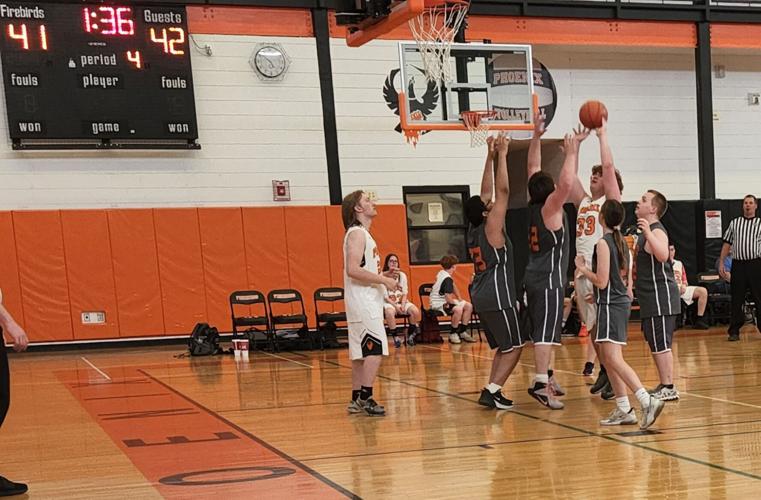 Benjamin Hess of Phoenix, center, looks to score against the Mexico defense late in the fourth quarter of the unified basketball championship game May 24 at Phoenix Middle School. Josh St. Croix/Johnson Newspapers. 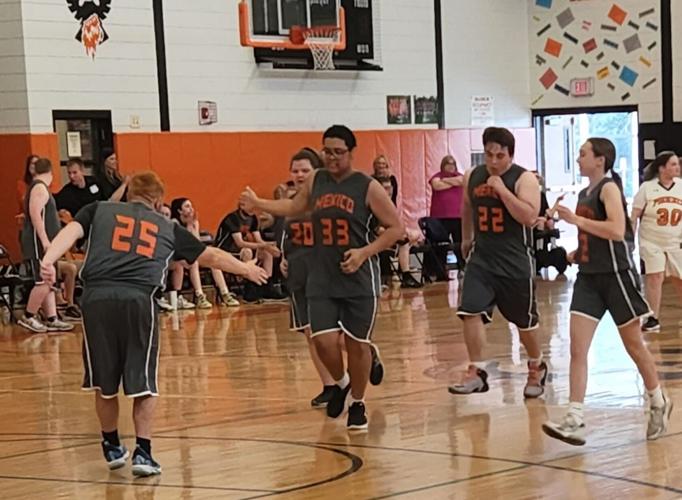 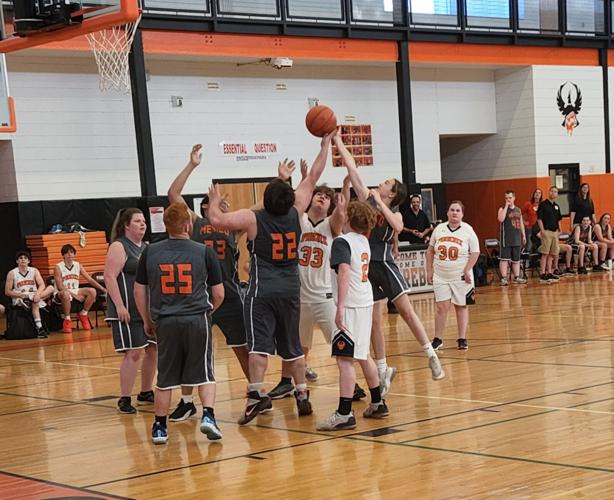 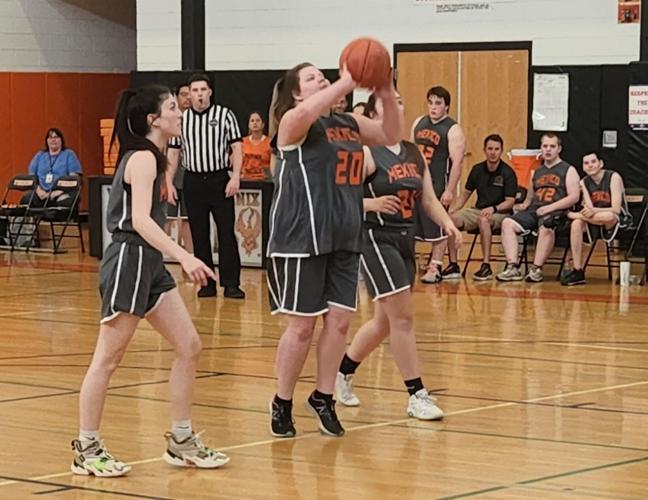 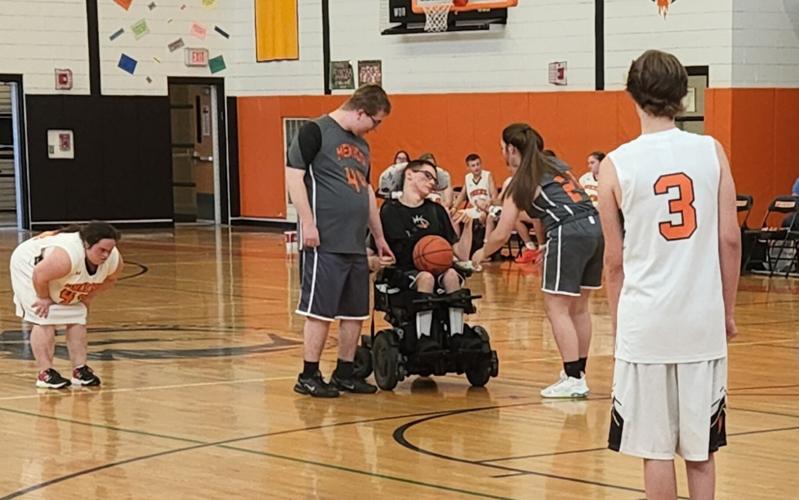 Mexico players advance the ball up the court together during the unified basketball championship game May 24 at Phoenix Middle School. Josh St. Croix/Johnson Newspapers. 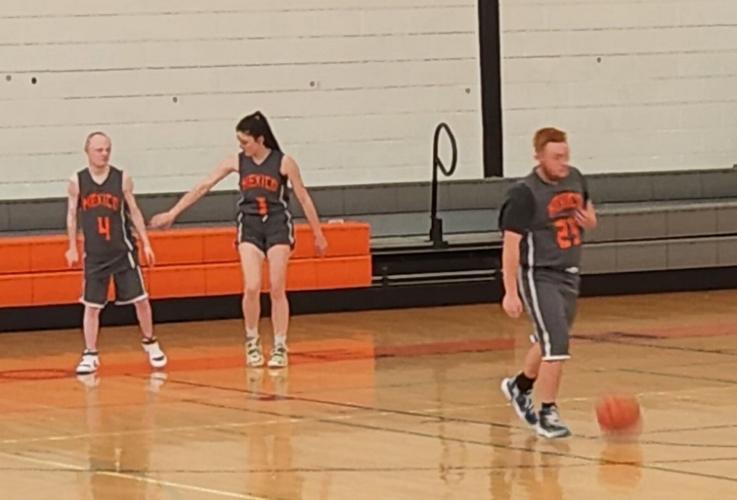 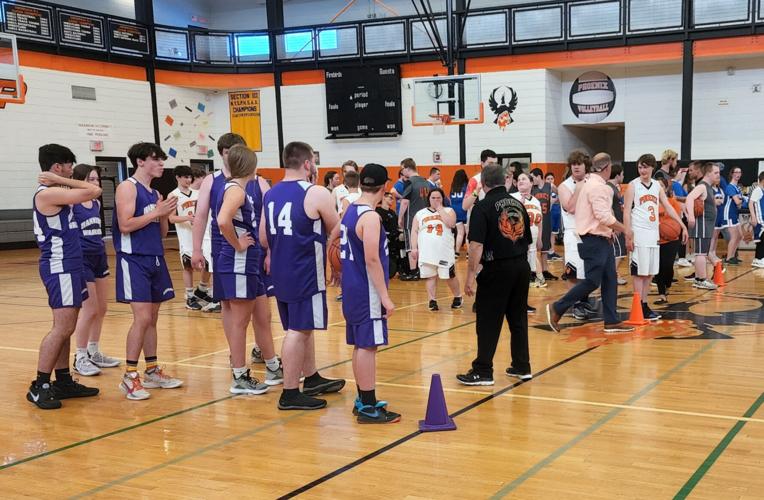 Mexico’s Jeremy Emery, left, secures a rebound to help the Tigers hold on for the win over the Phoenix Firebirds in the unified basketball championship game May 24 at Phoenix Middle School. Josh St. Croix/Johnson Newspapers.

Benjamin Hess of Phoenix, center, looks to score against the Mexico defense late in the fourth quarter of the unified basketball championship game May 24 at Phoenix Middle School. Josh St. Croix/Johnson Newspapers.

Mexico players advance the ball up the court together during the unified basketball championship game May 24 at Phoenix Middle School. Josh St. Croix/Johnson Newspapers.

PHOENIX — Jeremy Emery hauled in a rebound as the final seconds ticked away and the Mexico High School unified basketball team rushed the court to soak in the thrill of a championship celebration.

The Tigers held on for the 46-43 victory over the host Phoenix Firebirds to cap off the joyous return of unified basketball to area schools for the first time since spring 2019.

The season culminated with the Oswego County championship and third-place games May 24 at the Phoenix Middle School.

Mexico rallied to beat Phoenix for the title in a back-and-forth matchup, ending after the Firebirds missed two chances at a potential game-tying 3-point field goal following a timeout by coach Gene Mills to set up a final possession.

“It was extremely exciting, it felt like a sectional game,” Mexico junior partner Ella McCoy said.

The co-ed unified sports program pairs its athletes — students possessing intellectual disabilities — with partners from the general student population for a nearly even split. Unified bowling teams also returned to some area schools this past winter.

Mexico and Phoenix faced off for the crown while Oswego and Hannibal battled for third place at a nearby gym in the same location, with enthusiastic and appreciative fans cheering on the athletes throughout as their smiles beamed in the spotlight.

Athletes from each team made hard-earned contributions — from completing an inbound pass, to dribbling up the court, and many making baskets, some for the first time after a season of training.

“It was amazing just to see the joy on the faces of kids who worked the whole season just for that moment,” Mexico sophomore partner Ella Blunt said. “We actually came together as a team, and we all worked together to get to this point.”

Fulton also participated this year — the Red Raiders were the first Oswego County school to add unified sports in 2016-17 playing against Syracuse-area teams in Section 3 — while Central Square has entered a team in past seasons.

Regular-season games were played among the five county teams over the past month leading to the finale. Prior to the COVID-19 pandemic, area teams played a more widespread schedule against other participating Section 3 schools.

“It was a little more close-knit this year, and all our games were very competitive,” Mexico coach Shawn Parkhurst said.

“We played Phoenix first in our season and lost in overtime, so we got to play them again which was really cool,” he added. “It was a great game, back and forth, close the whole time, so it was a great experience for the kids. It was fun coaching and cool to end on a note like that.”

The game was followed by a relay race in which players from all four teams lined up and took turns dribbling up the court, around a cone and back, providing added opportunities to cheer on the athletes and witness their skill development.

The unified sports programs were initiated by the Special Olympics of New York and the NYSPHSAA.

Several area schools allowed varsity basketball players to join unified teams this year. Blunt and McCoy were among those who played for the first time this year and said they were eager to play again next spring.

“It’s an awesome thing when we pair up our athletes and our partners, it’s a great experience for both sides,” Parkhurst said. “You learn a lot of patience and compassion on the partner side of things, and then our athletes get an awesome experience to be able to play in a competitive sport in high school.”