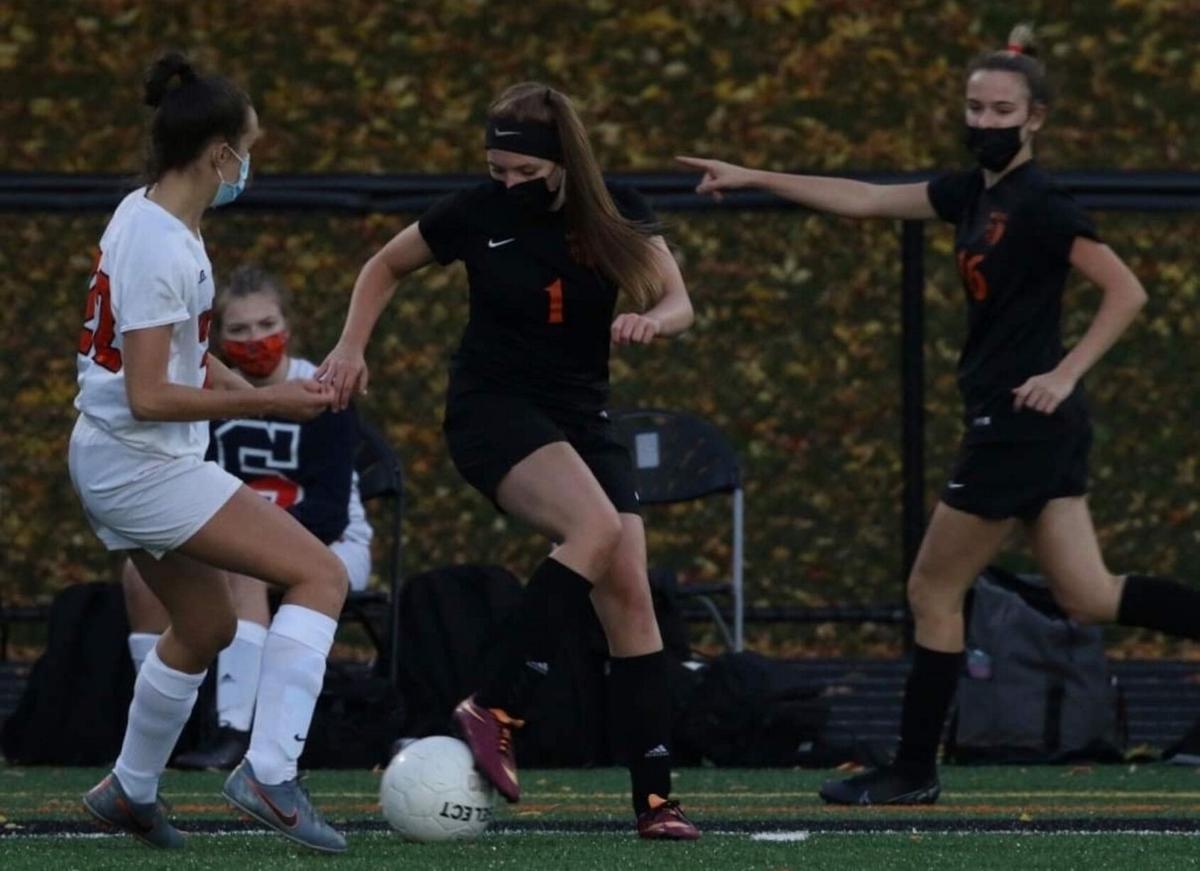 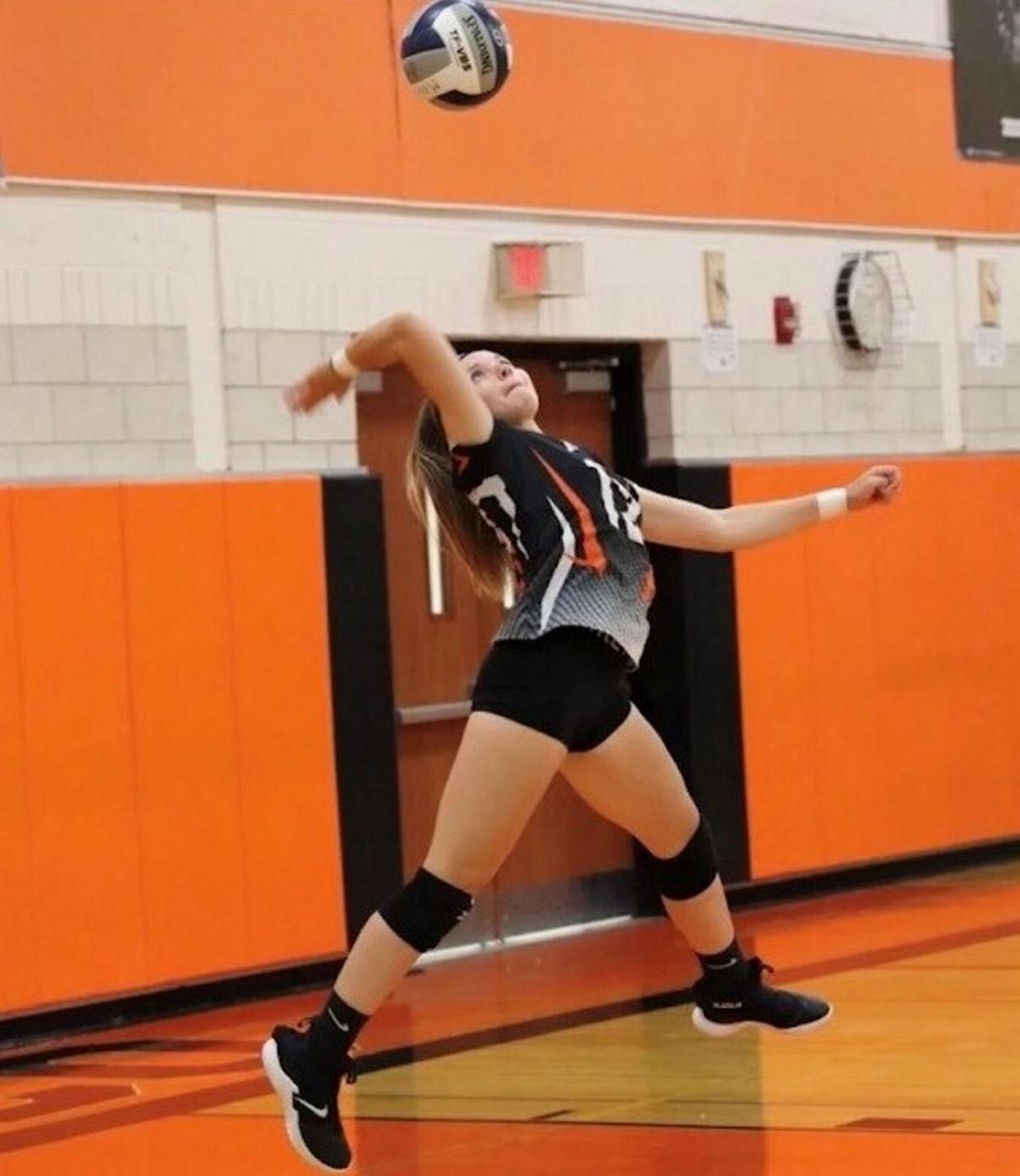 MEXICO — Approaching every fall since her freshman year, Mexico soccer coach Martin Charles would jokingly ask Melisa Button if she intended to stick with volleyball that year, letting her know she had a place on his team if she ever decided to give up her beloved sport.

This year, due to unfortunate circumstances of the fall volleyball season being postponed, Button was able to oblige and quickly excelled.

Button, the 5-foot-10 senior, recently finished her lone varsity soccer campaign in the starting lineup and is now hoping for the opportunity to be a four-sport athlete as she awaits the potential start of basketball season, followed by the hope for a volleyball campaign in Fall II set to begin in March, and softball in the spring.

“I’ve kind of always wanted to try soccer but I was never able to,” Button said. “I wanted to keep up on my skills and my athleticism, and having a season off, I didn’t really like that, I wanted to always be doing something.”

Button was an established standout in each of her three preferred varsity sports entering her senior year — volleyball, basketball, and softball — and a varsity volleyball starter since her sophomore year.

She was presented with the Laurence “Sparky” Rector Award as Mexico’s Female Athlete of the Year as a junior last June.

Charles said that he had long considered Button’s potential in soccer, even more after hearing about her work ethic and practice habits from her other coaches. He said that Button quickly fit in and her athletic prowess carried over from other sports, helping her adapt to the new game quickly.

While playing goalie for shooting drills, Charles said that he would often exit the goal for sophomore striker Grace O’Gorman, who fires the hardest shots on the team, and was eventually forced to take the same action for Button.

“I knew her intensity and how hard she plays and practices, and she met all of my expectations,” Charles said.

“I think that very first practice was a wake-up call of how hard soccer is and how we treat it here at Mexico, but she fit in well and every day she got better, every day she understood how the sport is played and how the positions she was going to play work, every day she progressed, and I knew she would,” Charles added. “You can put that kid in any sport you want, and we proved that this fall.”

Button was initially slotted as a backup defender but ultimately played every position on the field throughout the season, including a five-minute spurt at goalie, mostly contributing as a midfielder down the stretch. She finished the year as a starter and contributed an assist.

Button noted the contrast between taking up a new sport and working into the starting spot as a senior compared to being an entrenched presence and team leader on her other squads.

“I was really nervous at first because all of the Mexico (soccer) girls have been playing since they were like, five, but one of our captains, (senior) Anna Bigelow was really welcoming right away,” Button said. “She had been wanting me to play, too, and she helped me with a lot of the skill work and footwork and the basic knowledge of the game. The whole team was very welcoming.”

Button helped the Tigers finish with a 7-3 overall record in the condensed campaign due to COVID-19, matching their win total from the previous year’s 18-game schedule. Mexico also out-produced its 2019 scoring total in nearly half the games.

“The soccer team was kind of like my (volleyball) team, they were welcoming and always liked to huddle up, always helped each other out, so it was kind of the same, but it was just with different people,” Button said. “It was a really great experience, it’s a really fun sport and I’m glad I tried it.”

Button’s success on the soccer pitch helped her move past a delayed volleyball season this past fall.

The state classified the sport as high-risk for spreading the virus and it was thus moved to the planned Fall II season in March.

Button also lost out on her junior softball season last spring and is now one of the many athletes coping with the latest indefinite delay to basketball and other high-risk winter sports.

“Putting her energy toward soccer, I think that made her feel a lot better, and knowing we had the season in March helps things,” said Mexico varsity girls volleyball coach, Margaret Dadey.

“She had talked to me about soccer and I just looked at her and I said: ‘Do not get hurt,’” Dadey added with a laugh. “I said: ‘Go and enjoy yourself, experience something new, I’m all for it, but don’t get hurt.’”

Button is hoping to complete a four-sport senior year before moving on to Jefferson Community College to continue her volleyball career. She has been in recent contact with the coaching staff and followed the Cannoneers’ run to the NJCAA Division III National Tournament last year.

Button plans to pursue a nursing degree at JCC with a specific interest in pediatrics and has started those studies at CiTi BOCES.

“It’s really exciting because sports are everything to me, I feel so comfortable and it’s my safe space, and I’m so excited to be able to continue my athletic career,” Button said.