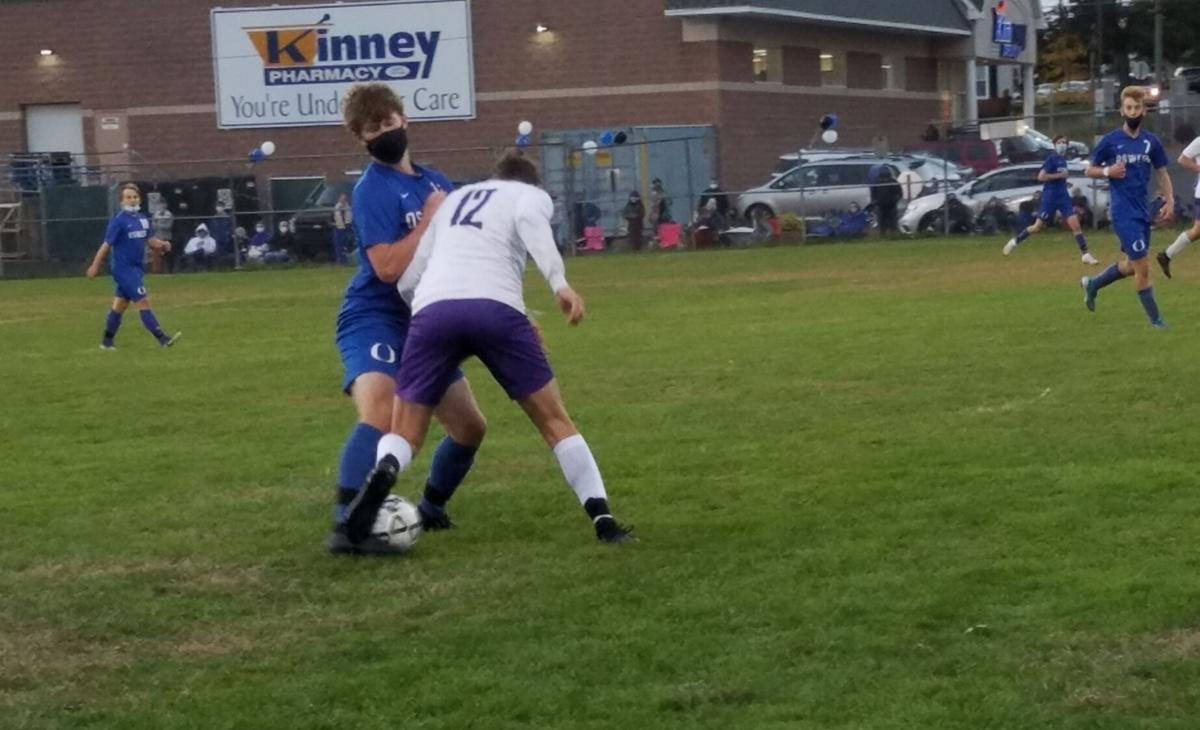 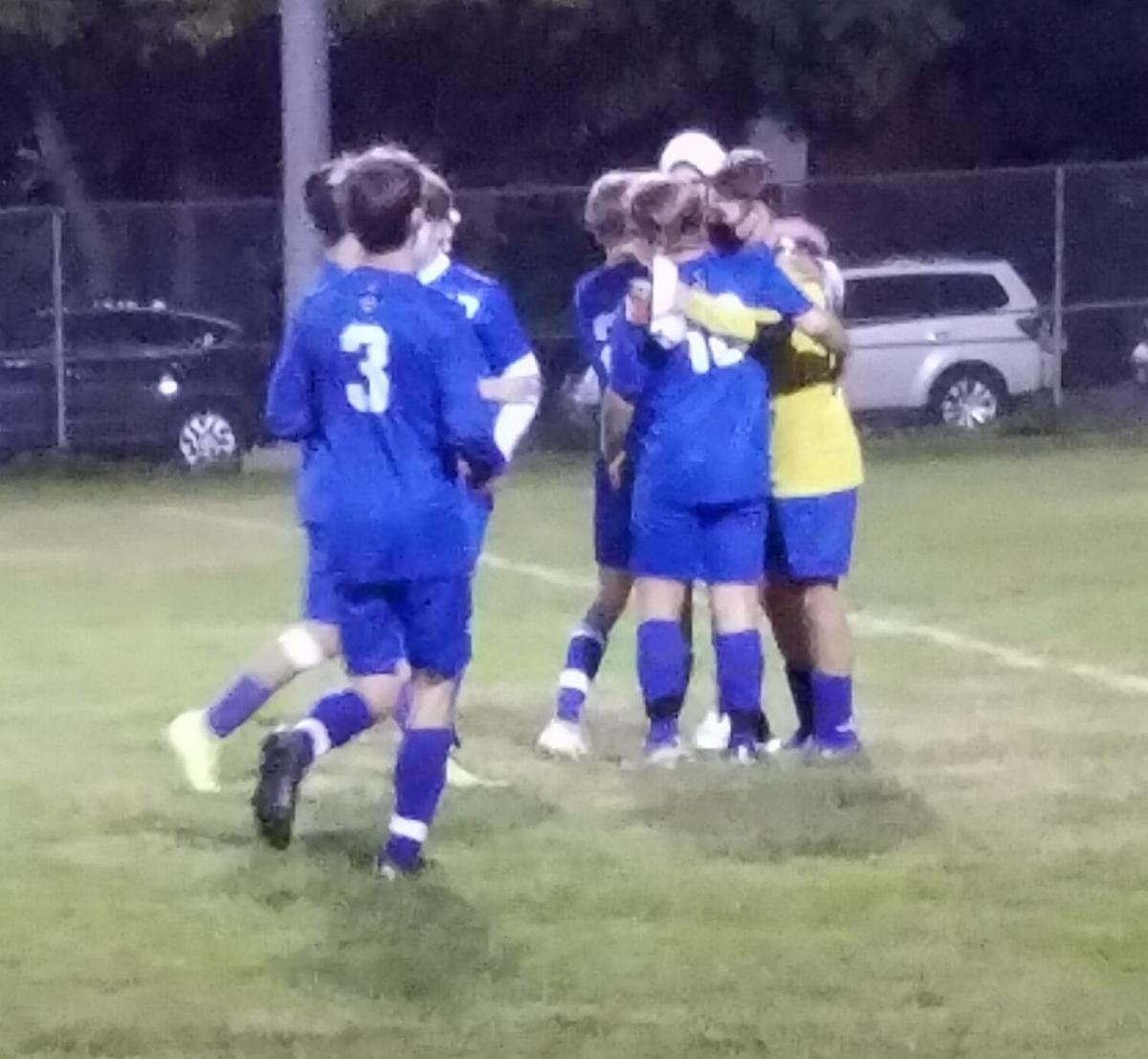 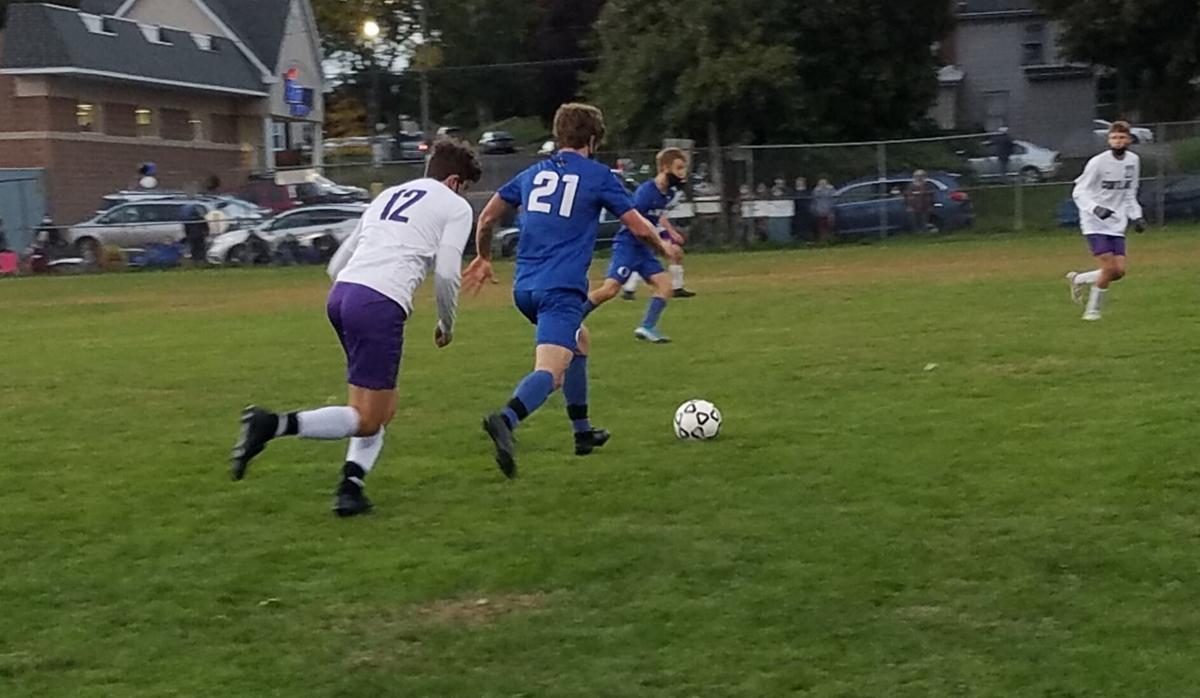 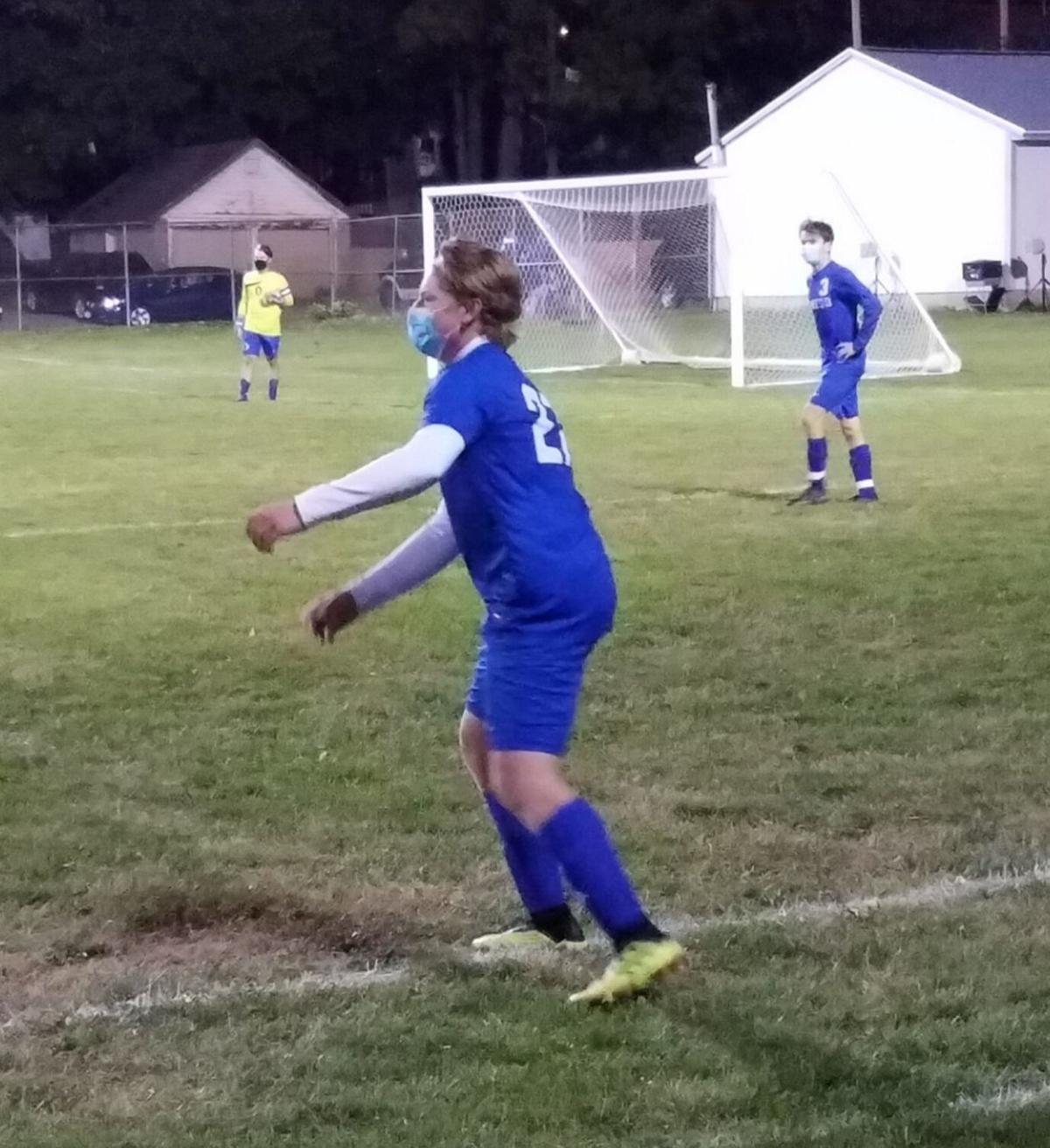 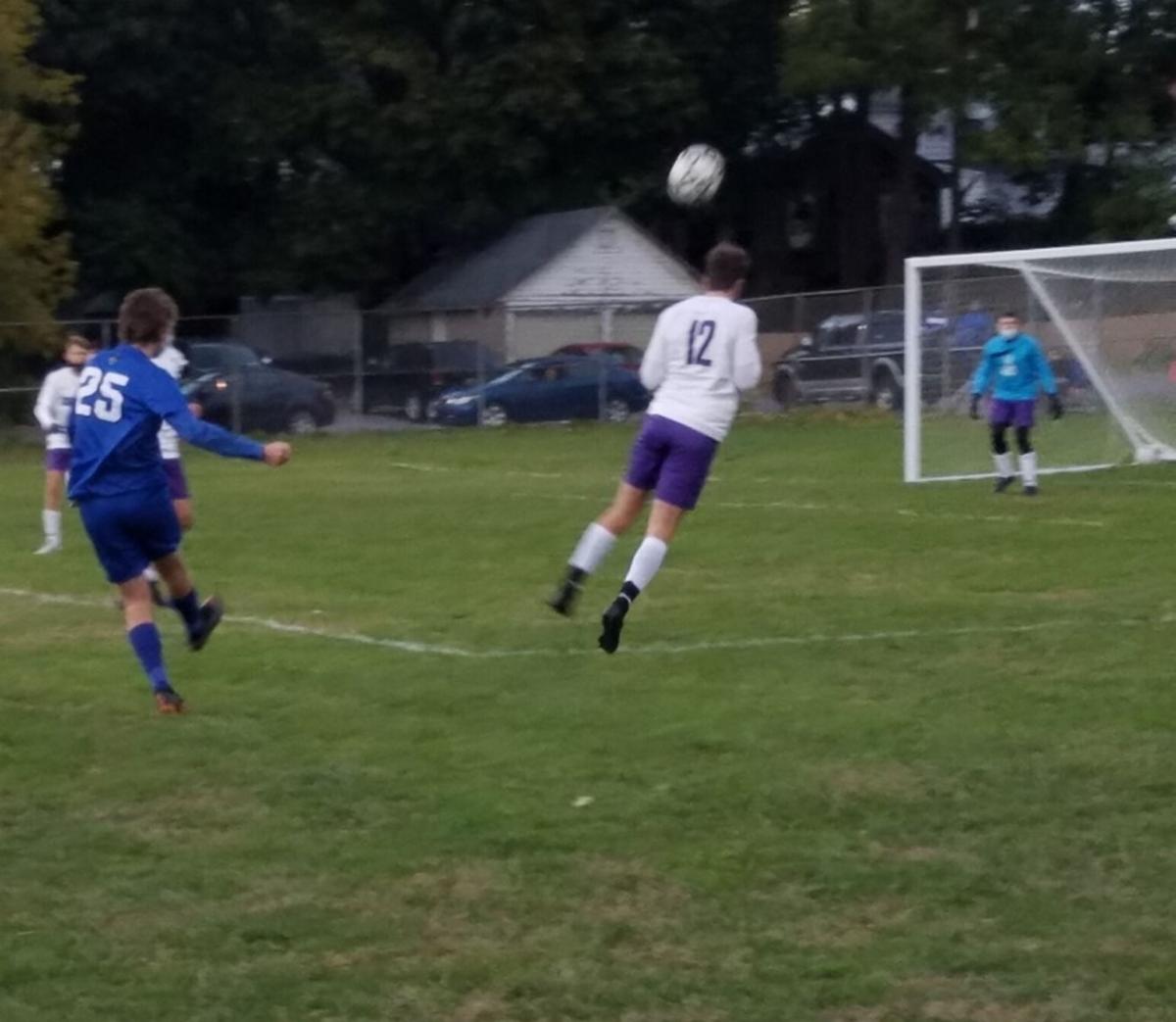 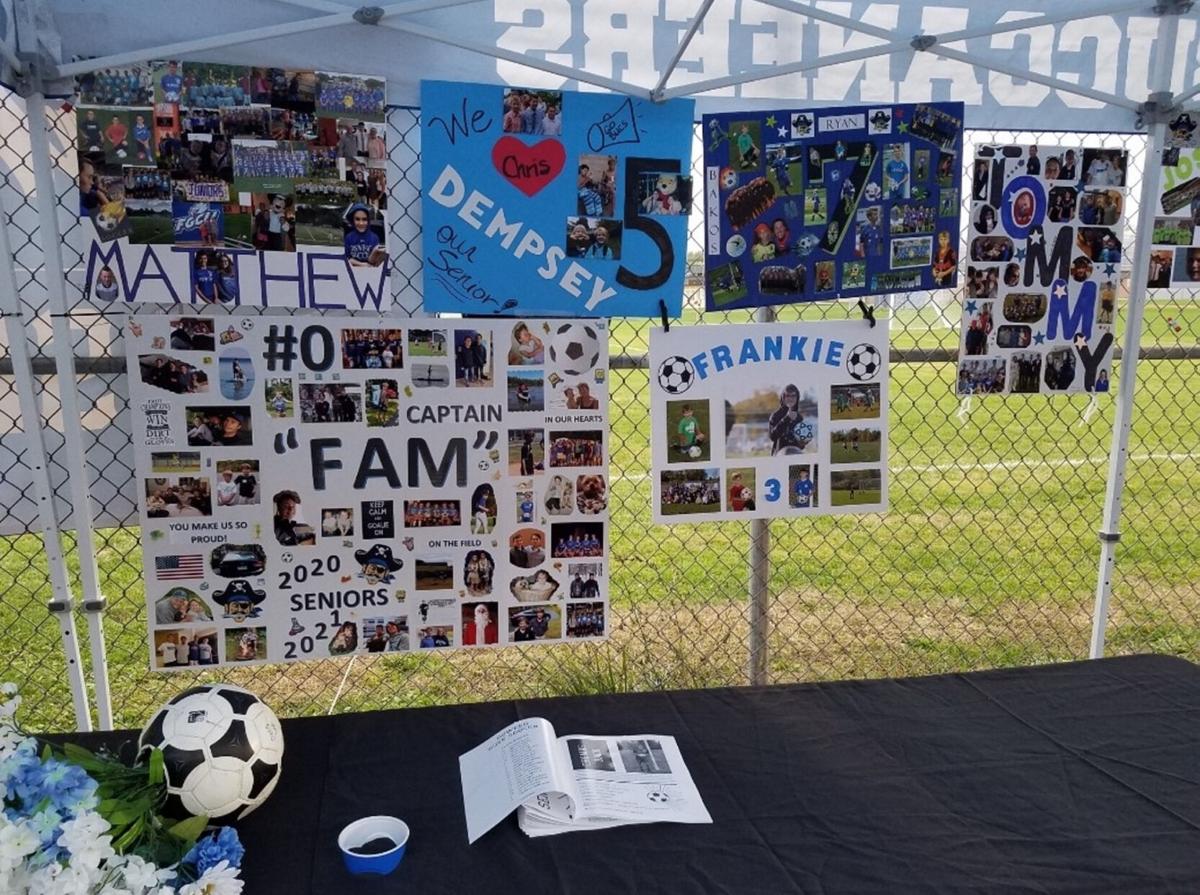 OSWEGO — The Oswego High School boys soccer team has quickly found familiarity at the start of a season that is sure to be unlike any other.

The Buccaneers claimed a 5-1 victory over Cortland to celebrate senior night in its home opener Oct. 8 at Leighton Elementary School Field and recognized nine seniors in advance, many of whom have played together in the program for several years, some starting as early as age five.

The veteran group has also reunited with their former modified coach, Mike Patane, who moved up to fill the varsity vacancy last month soon after fall sports were approved in the district.

Patane had spent the previous 18 years as modified coach and made the transition because only varsity sports, not modified and junior varsity, received the district green light this fall due to coronavirus-related concerns.

“It’s just like old times, they’re just bigger guys,” Patane said of the reunion. “They’ve come a long way with the power and the skills, and we just need to pull it all together and keep playing as well as we did here (on senior night). … They respected me as soon as I walked onto the field as I respect them, and everything was just quickened as we played. They’re big guys now, but they still listen to me, and everything is working out well.”

Oswego will play without spectators for its home games this year due a board of education directive, but they received full-fledged fan support in the senior night win.

Parents and classmates parked chairs along the fence outside the field and lined the row with signs and posters to commemorate the nine seniors. Parents were called onto the field with their seniors for special recognition while maintaining distance during the pregame ceremony.

The large senior contingent is led by co-captains, goalie Kyle Familo and Collin Dohse. They are joined by Tommy Back, Ryan Bakos, Matt Callen, Chris Dempsey, Joe DiBlasi, Tyler May and Frankie Winchek.

“To know that everyone is here watching us, and to succeed with all of our friends here, it feels really good,” Familo said. “It was kind of emotional seeing everybody there with their parents. It was nice, but it’s your last year playing with all your buddies, so it’s kind of sad. It’s also a good feeling, though, to end on a note like this.”

Familo made seven of his 10 saves in the second half to help Oswego preserve its victory over Cortland and improve to 1-1 overall entering the week.

Tyler May scored an unassisted goal nine minutes into the game to get the scoring started, and he added another goal later in the first half. Marcus Baker scored twice, Clay Kennedy tallied a goal to go with two assists, while Ryan Bakos and Ethan Locastro each added an assist in the win over Cortland.

“It was amazing to share this special moment with all our friends, all our seniors, and I’m just glad we could pull out the win in our second game,” Bakos said.

The Buccaneers are playing on the nearby Leighton Elementary pitch while construction work continues at the new high school stadium. The turf field has been installed but surrounding areas of the complex have yet to be completed.

In addition to the absence of spectators on the grounds, players are adapting to several changes in place to comply with state COVID-19 mandates. They are required to wear masks while playing and are allotted set break times.

“Our coach and our athletic director (Rhonda Bullard), everyone has to work really hard for us to be able to do this, so it means the world to us that we can still play soccer,” Familo said.

“It’s different, but it’s the same people, the masks don’t really interfere with anything, it’s just keeping us safe,” he added. “We’re still the same people, playing the same as we would without a mask.”

Central Square, Mexico, and Phoenix are also participating in boys soccer this fall, and along with Oswego, also offer girls varsity soccer. Altmar-Parish-Williamstown and Pulaski will each field girls soccer teams this fall season.

The Buccaneers are playing a 12-game schedule to wrap up on Nov. 12, which is a similar slate to all participating area schools that opened play last week.

“It’s awesome because at first, I didn’t think we were going to have a season, and that just crushed me,” Bakos said. “When I heard we were cleared to play, it was the best feeling in the world to know we were going to get back out here and finish our last year together.”